The sugar in fruit is different from the sugar in a doughnut, according to Kara Shifler Bowers, a registered dietitian and project manager at Penn State PRO Wellness.

The sugar in and apple and a doughnut are not the same. (Photo: Getty Images)

“Natural sugars in fruit are different because fruits carry fiber as well as many antioxidants and vitamins such as A and C,” Shifler Bower said.

Experts say women should consume no more than six teaspoons or 25 grams of added sugar each day. For men, the amount is nine teaspoons or 36 grams. For women, this is just 2/3 can of soda or 1 1/2 dessert — like yogurts.

What can a hardcore chocoholic do?

Instead of totally eliminating sugar and chocolate, she suggests having a small piece of chocolate such as a dark chocolate Hershey’s Kiss to curb cravings rather than an entire candy bar.

“Sometimes people may actually be craving the magnesium in real cocoa,” Shifler Bowers said. “To curb chocolate cravings, have just a few dark chocolate-covered almonds, which are high in magnesium.” 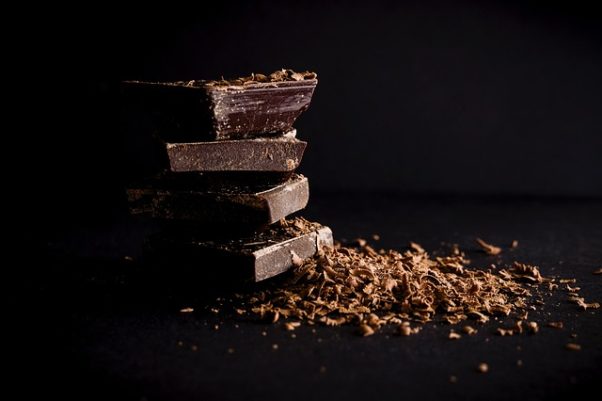 If you crave chocolate, swich to dark chocolate, which has more cocoa and less sugar. (Photo: StockSnap/Pixabay)

Sticking with whole foods such as fruits and vegetables might also curb added sugar intake. Even seemingly healthy choices such as yogurt, fiber bars, protein bars and spaghetti sauce can hide loads of added sugars. “In granola bars, the sugars help ingredients stick together,” Shifler Bowers said. “In spaghetti sauce, sugars are used to cut the acidity. Try snacking on fruit and nuts instead.”

Saving sugary sweets for special occasions rather than a regular routine can help curb a sweet tooth. “You crave what you eat,” Shifler Bowers said. “Your body can forget about foods, so to speak, so the longer you abstain from them, the easier it will be. You can still enjoy them at times, but you won’t need to eat the same amount.”

When it comes to children and sweets, the longer parents wait to introduce them to sugar — even the sugars in juices — the better.

“Their taste buds are still developing, so if they get used to sweet foods, that is what they are going to want to eat as they get older,” Shifler Bowers said.

She recommends children ages 1 to 3 years old consume no more than four ounces of fruit juice a day. “It’s really easy to consume a lot of sugar when drinking sweet beverages. Instead of juice, try offering children fruit such as melons or berries instead, so they get plenty of fiber.”