Bonfire, 1132 19th St. NW, opens Wednesday, May 4, in the former Famous Luigi space. From the Social Restaurant Group, which also owns Provision No. 14, Bonfire is a campfire-focused restaurant and bar. 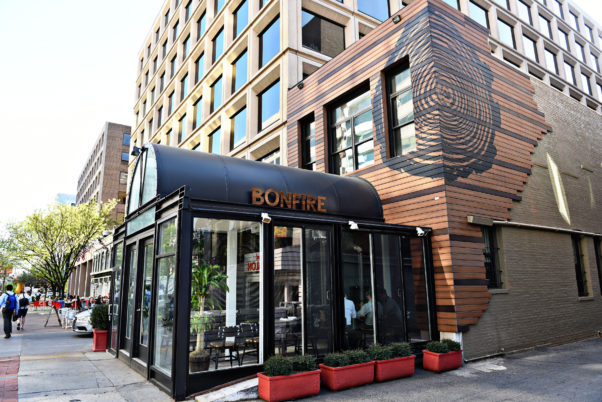 Designed by Swatchroom’s Maggie O’Neill, Bonfire features four areas: a large downstairs bar with high-top tables and lounge seating, a greenhouse-like enclosed patio, and upstairs bar and a small private dining room. The rooftop, which is slated to open later this summer, has fire pits and a bar. The space has high ceilings, exposed brick and an open fire feature. The décor features textiles, charred wood, rose gold and blackened steel metal accents.

Desserts include campfire skillets like the dark chocolate skillet with banana, topped with marshmallow and homemade graham crackers and s’mores. (Photo: Bonfire)

The bar program from Glendon Hartley and Chad Spangler includes a collection of craft beers as well a cocktails “from the hearth.” Many of the cocktails use elements of woods salvaged from liquor aging barrels, each creating a unique aroma and flavor based on the type of wood and spirit the barrel housed. Concoctions include the Nocino, which features bourbon, sherry and smoked almond tea; and the Sas-Squash with roasted acorn squash, whiskey and smoke from a rye whiskey barrel stave. Other Manhattan and Old-Fashioned style cocktails will feature aged whiskies, brandy, aged rums and the use of several varieties of woods, smoke and fresh fruit juices.

Bonfire will be open from 11 a.m.-midnight daily. 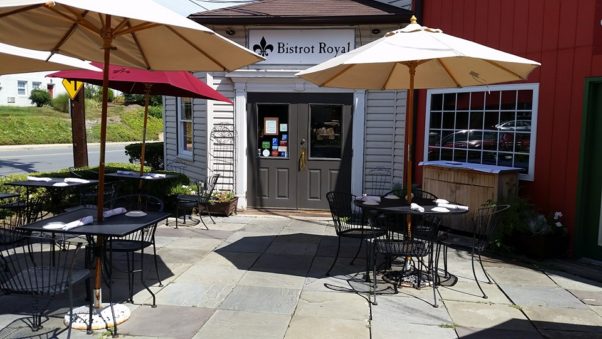 After about a year and a half, Bistrot Royal will close in Alexandria on Saturday. (Photo: Bistrot Royal/Facebook)

“Over the past year and half, we have been splitting our time between the two restaurants. This resulted in neither being able to reach its full potential,” the pair said in a press release. “On a personal level, our growing and busy family helped us realize the importance of optimizing our time and our continued endeavors to expand Bastille.”

In a Facebook posting, the restaurant said its lease was over and the building’s owner had sold it for redevelopment with condos or townhouses to be built.

Bistrot Royal opened in January 2015 in the former Bastille location, after Bastille moved to the Asher apartments in Old Town. Some favorites from Bistrot Royal’s more casual menu such as frisee salad with lardons, French onion soup and duck confit will be incorporated into Bastille’s upscale contemporary French cuisine.

“At Bastille at the Asher, our guests can expect the same traditional French dishes with the same consistency, but combined with the contemporary cuisine of Bastille. We will continue to showcase local, sustainable ingredients with a modern approach,” the chefs said.

Praline Bakery & Bistro, 4611 Sangamore Road, Bethesda, opened a second location next to the historic Spanish Ballroom in Glen Echo Park on April 30 serving a quick/casual menu featuring sandwiches, soups, quiches, salads, freshly popped popcorn and other fare to eat in the café or take out. It also offers a kid-friendly menu and full-service catering for onsite events.

The Glen Echo location will feature Praline’s pastries, macarons, cakes, tarts and cookies, as well as picnics to eat on the grounds served in a signature picnic satchel. Picnic options include a choice of sandwich, drink, and macaron or framboise. A French style picnic for two includes charcuterie, a cheese plate, salad, macarons, palmiers and mini ficelles; while picnics for three or more, choice of two kinds of sandwiches, salads and a dessert or French style with two charcuterie, cheese or smoked salmon plates, two salads, and desserts.

Praline will open a third location in Fairfax’s Mosaic District this fall. 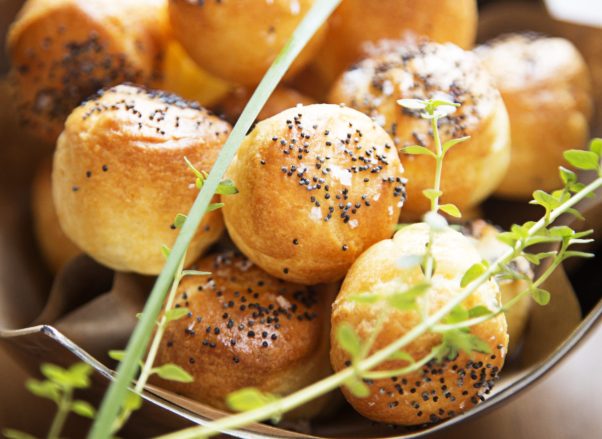 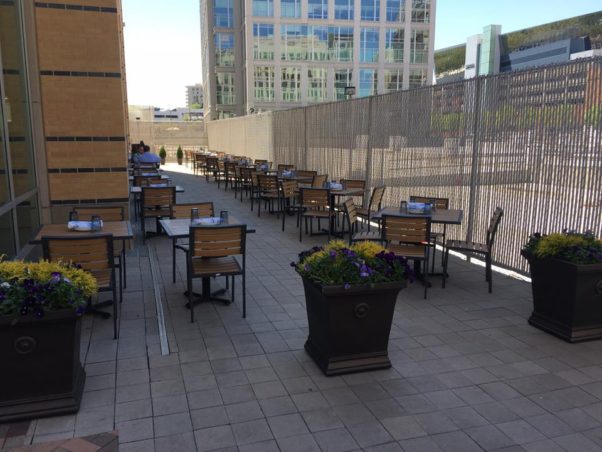 The festival will be held rain or shine on the Ballston restaurant’s patio and feature spit-roasted meats, homemade spreads and flatbread, live Greek music, Greek wines and more.

Tickets are $69.57 and can be purchased online.

The evening begins with a wine tasting and antipasti from 6-8 p.m. with wines selected by Giacomo Satta, Michele Satta’s son, followed by an optional 3-course dinner at 8:30 p.m. with wine pairings from Satta.

Giacomo Satta will be on hand to greet guests and take them through seven Tuscan wines. Executive chef Will Artley will compliment the wines with paired antipasti like an Italian cheese board with an assortment of freshly baked breads, halibut crudo garnished with smoked leeks and a fava bean rillette with pork rinds. Wine will include Giovin Re Toscana IGT Viognier, Cavaliere Toscana IGT Sangiovese, and varietals like merlot, cabernet, a sangiovese and syrah blend, 100 percent Aglianico del Vulture and a vermentino and sauvignon blend.

Tickets for the wine tasting and small bites or the dinner may be purchased by contacting nonnas@alphonsedc.com. 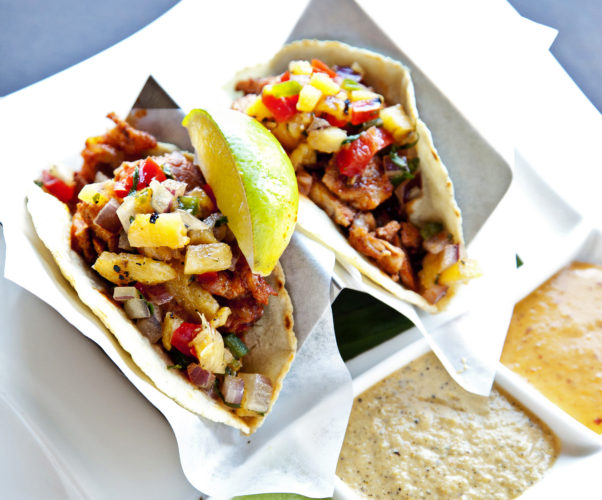 Get a duo of tacos and margaritas for $10 at Fuego on Cinco de Mayo. (Photo: Fuego Cocina y Tequileria)

Fuego will kick things off at noon with an extended all-day selection of traditional margaritas, select draft beers and guacamole for $5 in a nod to the 5/5 holiday. Other specials include Patron margaritas for $8, a duo of tacos and margaritas for $10 and a four taco platter and margarita litro for $35. For dinner, Fuego will serve loaded fajitas for two priced at $50 with a sizzling mix of fresh veggies, a choice of proteins and traditional accompaniments.

BLT Steak, 1625 I St. NW, is celebrating Cinco de Mayo with the old Guadalajaran imbibing tradition by offering three twists on the classic sangrita paired with a flight of small-batch 123 Organic Series tequila. 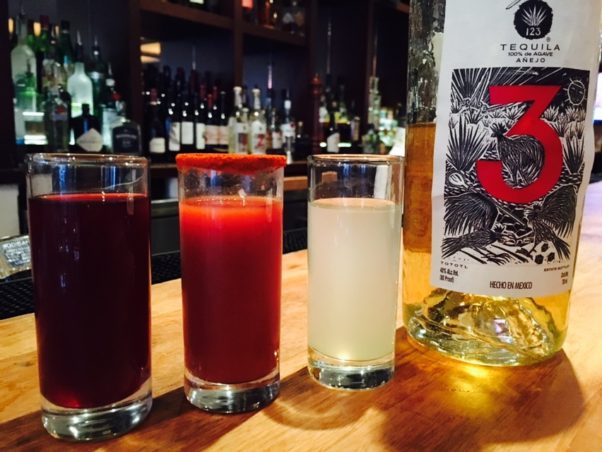 El Centro D.F., 1819 14th St. NW, and 1218 Wisconsin Ave. NW, will celebrate Cinco de Mayo by offering a bottomless buffet from 4-10 p.m. on Thursday, May 5. Priced at $20 per person, diners can enjoy an endless buffet of authentic Mexican comfort fare with three different serving stations around the restaurants.

There will also be $6 El Centro margaritas, frozen or on the rocks with Sauza Blue Silver tequila, fresh lime, agave nectar and a choice of strawberry or mango puree; and $5 imported Mexican beers including Corona Extra and Light, Dos Equis Lager and Amber, Tecate, Victoria, Modelo Especial, Sol, Pacifico, Bohemia and Negro Modelo.

The Prospect will offer two tacos including the fiery pollo asado taco for $6 from 5-10 p.m. on Cinco de Mayo. (Photo: The Prospect)

Diners can wash their tacos down with $4 Coronas and Tecates, $5 tequila shots and $6 margaritas all night long. 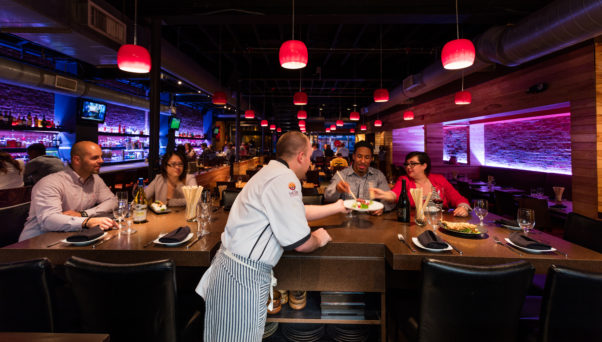 Located in front of the kitchen in the 100-seat main first floor dining room, the chef’s table seats up to 12 diners. Two seatings will be available on Thursday, Friday and Saturday evenings. The first seating will begin at 6:30 p.m., followed by a second seating at 9 p.m.

During each two-hour tasting, diners will sample 9-13 “off menu” dishes that will be exclusive to the chef’s table dinner. New executive chef Ryan Ratino will interact with guests as they dine, presenting his dishes and answering any questions. The price $80 per person or $125 with five wine pairings.

The restaurant’s beverage has created a boutique collection of 20 wines to pair exclusively with the chef’s table menu. The wine list focuses on natural, biodynamic wines, and specially selected rare magnums, which are not found on the restaurant’s featured wine list. Wines by the bottle will range from $60-$500 each. 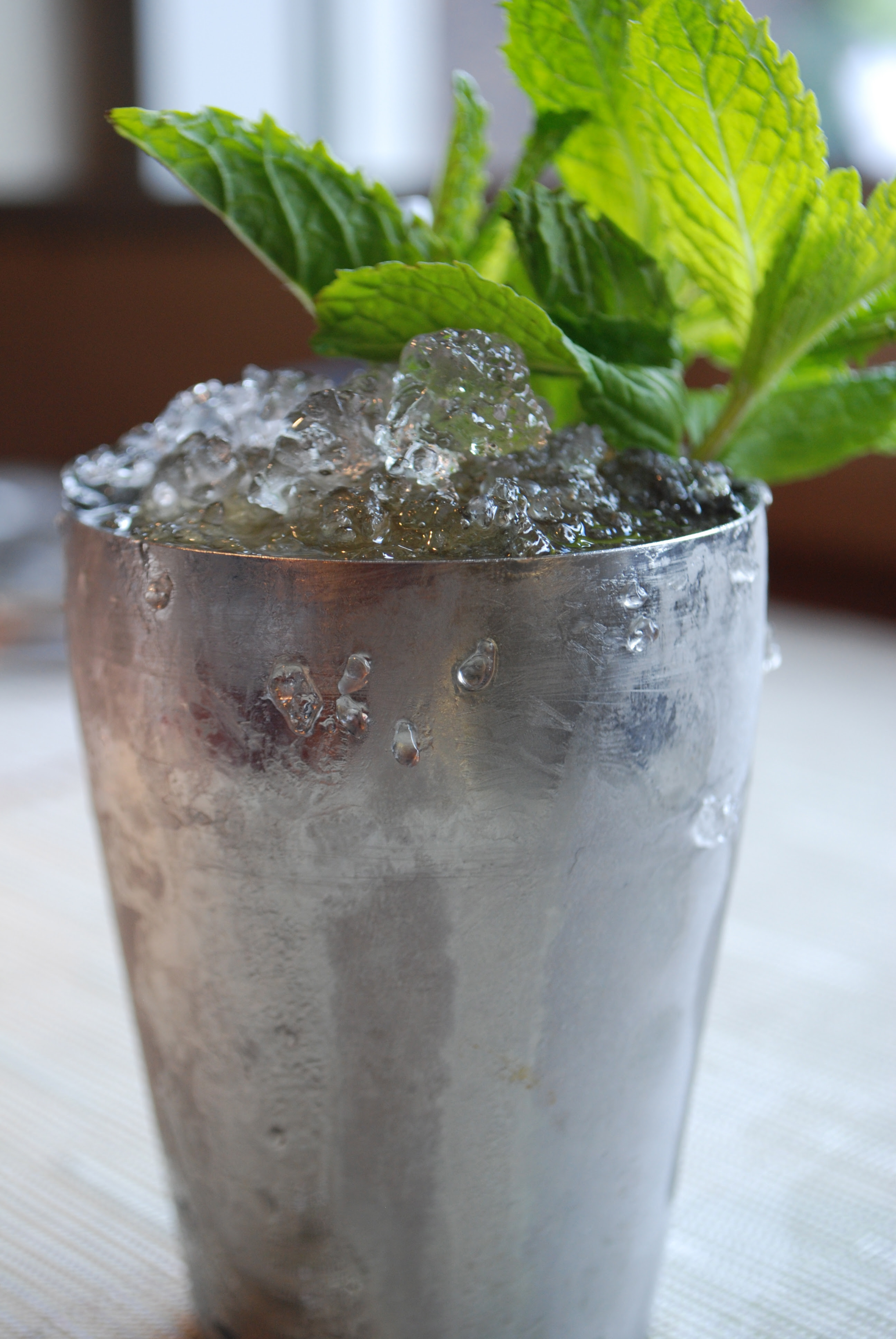 Acadiana will serve $5 mint juleps during the Kentucky Derby on Saturday. (Photo: Acadiana)

Acadiana, 901 New York Ave. NW, will whisk diners off to three days at the races with its annual Triple Crown festivities. The restaurant will show each of the horse races on big screen TVs and serve authentic $5 race track deals with customary bites and signature drinks that reflect each historic race.

Kick off the Triple Crown on Saturday, May 7, and catch the greatest two minutes in American sports with the legendary Kentucky Derby. From the bar to the patio, enjoy true Churchill Downs specialties like Hot Browns, Burgoo Stew and Derby Pie along with Kentucky’s own Bulleit bourbon in each signature Mint Julep.

Acadiana will also bring in one of the country’s officially designated “Master of Bourbon” with extensive knowledge on the whiskey category gleaned from nearly a year of traveling across the country to distilleries, rigorous training and testing. Nick Crutchfield will pour Kentucky bourbon samples and talk shop. Don your best Derby Day hat or jaunty bowtie for a chance to score gift certificates.

The on Saturday, May 21, the restaurant will celebrate the Preakness. Customary track fare favorites will include crab cake sliders, Maryland fried chicken and strawberry shortcake. In keeping with tradition, the official Preakness drink will be served: The Black-Eyed Susan with bourbon, vodka, fresh sour mix and freshly squeezed orange juice over ice and garnished with an orange slice and house-made cherry.

As the stakes raise for the final Triple Crown race, Acadiana will host its last viewing party for the Belmont Stakes on Saturday, June 11. Sample Belmont classics like short rib sliders, goat cheese Winner Purse and hazelnut macaroons. The famed Belmont Breeze, a blend of Seagram’s 7, Harvey’s Bristol Cream sherry, fresh sour mix, fresh squeezed orange juice, cranberry juice, 7-Up and a lemon wedge, will be shaken up as the specialty drink.

Logan Tavern, 1423 P St. NW, will have Kentucky Derby specials on Saturday, May 7, while showing the race on TV at the bar. Traditional Derby food specials will be served such as fried green tomatoes ($9), Kentucky Hot Browns ($16) with roast turkey and bacon on rustic with seared tomato, arugula and red eye béchamel, and chocolate bourbon Derby Pie ($8), from 3 p.m. until close.

There will also be a Win, Place, Show gift card giveaway. All guests will receive a card with a competing horse’s name, which can then be filled out and dropped in a bowl with all other cards with the matching horse’s name. A drawing will be held from the bowls of the first, second and third place finishers, and a gift certificate will be given to those drawn! There will also be gift card giveaways in a best dressed competition.

Guests are invited to don their finest derby attire for the first race of the Triple Crown for Jack Rose Dining Saloon’s fourth annual Kentucky Derby Celebration and Viewing Party from 3-7 p.m. on Saturday, May , on its rooftop terrace with mint juleps and derby punches, complimentary Southern bites, Kentucky bourbon flights, Flying Dog derby-inspired brews and a live viewing of the 2016 Run for the Roses. 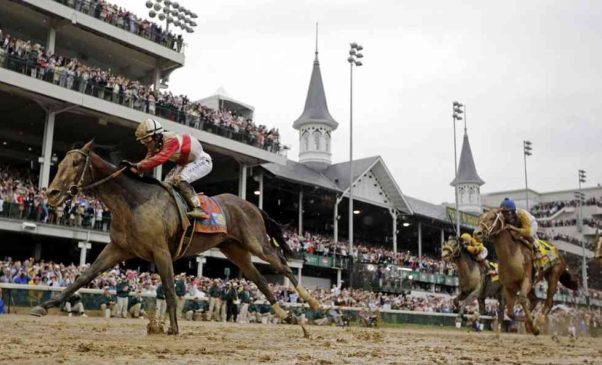 The restaurant at 2007 18th St. NW will offer drink specials on Mint Juleps ($9), Derby Punch ($8) and classic Bourbon cocktails ($10), along with whiskeys, Kentucky bourbon flights and cigars throughout the day. There will also be complimentary Derby-inspired snacks such as Kentucky Hot Browns and cucumber sandwiches. And those looking forward to the race can watch on five large flat screen TVs located throughout the rooftop terrace and Tiki bar.