Protecting Children from the Heat

Hot temperatures and high humidity can put nearly anyone at risk for dehydration and heat stroke, but children are especially vulnerable.

When playing or exercising outdoors in the summer heat, children should take frequent breaks and drink plenty of water.
(Photo: Thinkstock)

A deadly phenomenon seen every summer is children being left in or becoming trapped in hot cars. These tragedies don’t just happen during heat waves. The temperature in a vehicle can quickly reach deadly levels on a 70 degree day, even with the windows cracked. Nationwide, 16 children have died in hot vehicles already this year, which is double the number from last year at this time.

“This is really concerning because it is a tragedy that is totally preventable and often the fault of the primary caregivers,” said Emmy Sasala, a health educator in the Pediatric Trauma and Injury Prevention Program at Penn State Children’s Hospital.

In some cases, exhausted new parents may have a change in routine that causes them to forget that their infant is in the back seat of their vehicle.

“It’s not something most people would ever think could happen to them,” Sasala said. “Most people are aware that it’s never a good idea to leave a child in a car, but you can get so distracted or tired that your mind loses focus on your child.”

Sasala suggests putting a sticky note on the steering wheel or important items such as your purse or cell phone in the back seat as extra reminders to check back there before leaving your vehicle. She also encourages passersby to take a second glance in the window when they see a car seat in the back of a parked car to make sure it doesn’t still have a child in it.

“That’s a case where you don’t want to mind your own business,” she said. “Call 911 if you find an infant or young child that has been left alone in the car, and if they appear to be in distress, get them out.”

In other instances, children have gotten into an unlocked parked car while exploring or looking for a toy and then couldn’t get back out. “Even if you don’t have children, there could be kids in the neighborhood who could wander into your car, so always lock your vehicle, even when it is in your driveway,” Sasala said. “And if you have toddlers and can’t find them, always check the pool first, then the car.” 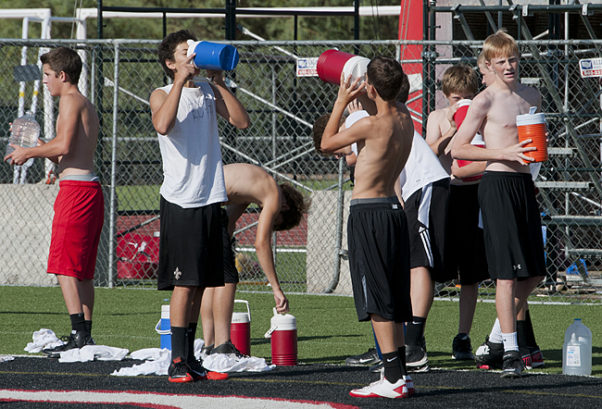 When participating in summer football practice, players should complete an acclimation period to get used to playing in the heat. (Photo: Daniel Friedman)

A lot of attention has focused on football, a sport for which pre-season practices typically begin in August, one of the hottest months of the year. Some states have policies that athletes must complete an acclimatization period of three days when starting back for the season with limited gear and shorter practices.

“You want to get them used to exerting themselves in the warmer environment and gradually ease them back into it,” Sasala said. “Even if your child is just going to tennis camp for a week, you’ll want them to do some activity outdoors in the days leading up to it so their body can get used to it.”

Staying in the shade when possible, taking frequent breaks and staying hydrated with lots of water can all help prevent the lightheaded feeling, dizziness and muscle cramps that can be early signs of dehydration or heat stroke. Avoid sugary drinks, as water is often the best choice. If a young athlete engages in intense physical activity lasting more than an hour, sports drinks may be a better choice.

Kids who play outside can get so involved in what they are doing that they may ignore their thirst or forget to take breaks. Parents can help by encouraging breaks for rest, shade and water every 15 minutes or so on hot days and by dressing the children in light-colored clothing so their body doesn’t heat up as fast.

Sasala recommends that parents make sure cold water is always available for their children, planning ahead for trips to outdoor events by bringing their own water bottles.

“Being prepared for the heat and taking steps to keep the body cool and comfortable will help everyone enjoy the summer weather safely,” she said.