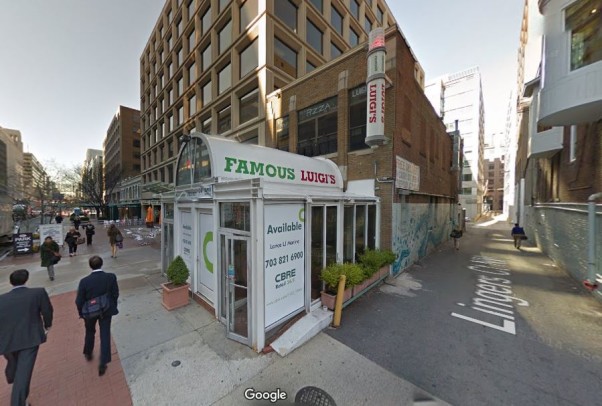 Bonfire from the people behind Provision No. 14 will open in the former Famous Luigi’s in late-March. (Photo: Google Maps)

Bonfire will offer an eclectic menu of creative s’mores, cast iron cauldron cookery and a barrel-wood smoked cocktail program. The two-floor, 5,500-square-foot restaurant and bar will serve new American cuisine. A hallmark of Bonfire’s menu is a dessert menu featuring several kinds of s’mores including a peanut butter and chocolate s’more and a caramelized banana and dulce de leche s’more, as well as creative takes on the campfire favorite such as s’mores push-pops in hazelnut and coffee, and gingerbread and blood orange among others along with a s’mores flourless layer cake.

The bar program of cocktails “from the hearth” created to evoke the warm and comfortable spirit of a bonfire will be featured. It will focus on aged spirits featuring several Manhattan and Old-Fashioned style cocktails featuring aged whiskies, brandy and aged rums. Several varieties of woods and smoke will be incorporated into the drinks. It will use oods salvaged from liquor aging barrels, creating a unique aroma and flavor based on the type of wood and spirit the barrel housed. Drinks include the Nocino with bourbon, sherry and smoked almond tea and the Sas-Squash with roasted acorn squash, whiskey and smoke from a rye whiskey barrel stave.

The design at Bonfire has been developed to enliven the powerful senses of gathering around a fire: warmth, community & vibrancy. DC design shop Swatchroom, award-winning designers of Provision no. 14 and Hank’s Oyster Bar have created a space which channels this energy across Bonfire’s expansive three-floor space. Entering from 19th street onto the first floor, guests will find a 26-seat dining room and a 16-seat bar. The second floor features a bar and lounge area totaling 38 seats and the third offers private dining seating of 20-22 and a rooftop patio with seats for 22.

LeTena, a fast casual Ethiopian restaurant and coffee house will open this spring in DCUSA at 3100 14th St. NW where Senor Chicken had been. 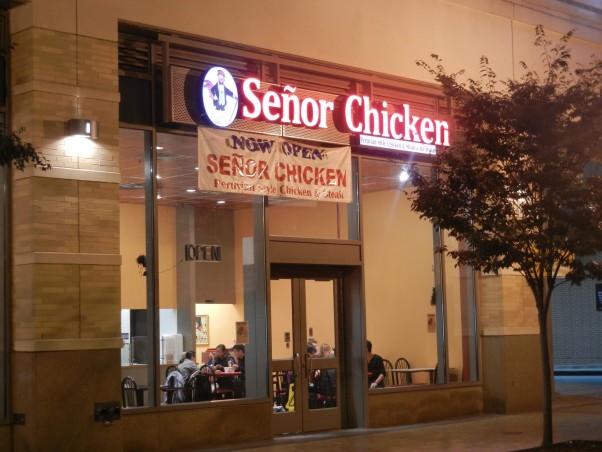 LaTena Ethiopian will open where Senor Chicken had been in DCUSA. (Photo: Two D.C.)

The restaurant, which will face Park Road, will have 30 seats in the dining room serving classic Ethiopian dishes with injera in traditional fashion or wrapped with bread or rice for those who wish to use utensils. A children’s menu and other international dishes that are favorites in the region will also be available.

LeTena is owned by Yamrot Ezineh, a native Ethiopian who has spent time in the food industry in Ethiopia and the United Kingdom.

Pizzeria Vetri, a Philadelphia pizza chain recently purchased by Urban Outfitters, will open a D.C. at 2221 14th St. NW – the corner of 14th Street and Florida Avenue NW, as early as June. The chain has two restaurants in Philadelphia and one in Austin, Texas. They are all open from 11 a.m.-11 p.m. daily. 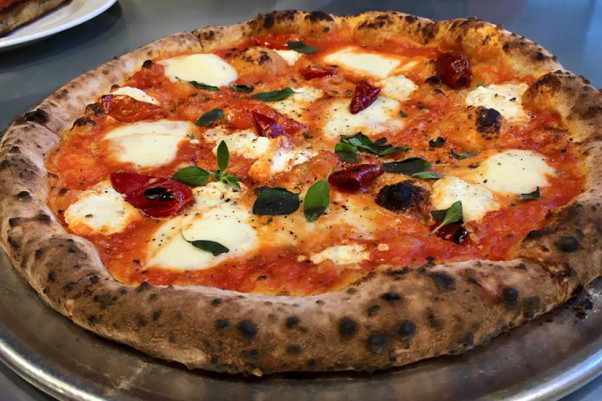 Pizzeria Vetri will open at the corner of 14th Street and Florida Avenue this summer. (Photo: Pizzeria Vetri/Facebook)

The pizzeria has applied for a building permit to build out to a fully operational restaurant including exterior modifications, signage, minor modifications to the existing storefront grills, electrical, mechanical, plumbing and structural.

In November 2015, when Urban Outfitters bought The Vetri Family group of restaurants, it said the pizza shop would be included in new clothing stores. Urban Outfitters targets American millennial hipsters and also owns Anthropologie, Bhldn (a wedding line), Free People and Terrain (a home décor brand). Bethesda has also been mentioned as a possible location for the pizzeria. 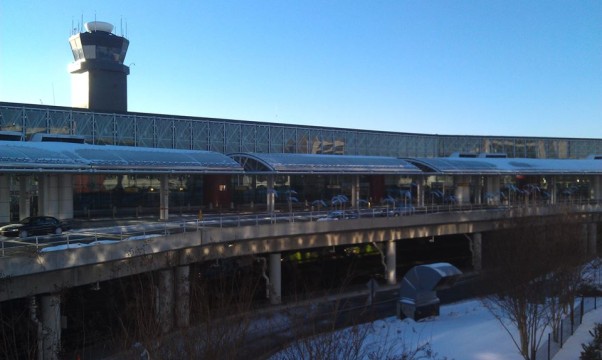 Isabella will open Kapnos Marketa, a spinoff of his Kapnos Greek family of restaurants, while Voltaggio will open a branch of his diner-inspire Family Meal. HMSHost will also open Brix & Vine, which will focus on wine, particularly Maryland wineries in Concourse D.

Isabella already has a Kapnos Taverna at Ronald Reagan National Airport, a spinoff of his Clarendon-based Pepita at Los Angeles International Airport and a Floridian-style eatery at Pensacola’s airport. Kapnos Marketa in Concourse B will feature a gyro counter and quick-grab items.

It will be the fifth Family Meal for Voltaggio and his first in an airport. Like the others, the American restaurant in Concourse A will serve breakfast, lunch and dinner.

All of the restaurants, along with a Starbucks, are slated to open in the spring and fall of this year.

Fabio and Maria Trabocchi, who own Fiola Mare in Georgetown’s Washington Harbour, will open Del Mar, a Spanish seafood restaurant, at The Wharf development when it opens in October 2017. 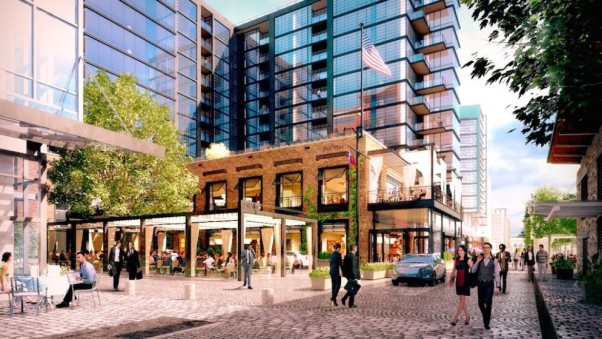 An artist’s rendering of what Del Mar will look like when it opens at The Wharf in October 2017. (Rendering: Gruppo Restaurants)

The two-story, 11,500 square-foot eatery on the Southwest Waterfront will be the couple’s largest restaurant yet. They also own Casa Luca and Fiola, and will open Sfogina, a pasta-centric restaurant in Forest Hills this fall.

Del Mar is dedicated to Maria, whose middle name is Del Mar, which translates to “of the sea.” The cuisine will be grounded in her native Spain, including the island of Mallorca, where she grew up. The couple visits there each year, and just recently return from collecting ideas for the upcoming eaterty.

Although the menu is still in its early stages, paellas will be a focus, along with tapas and seasonal dishes from the Basque region, Barcelona and Valencia. The drink program will feature Spanish wines and ciders.

In warmer months, there will be a 1,900 square-foot patio, enclosed veranda on the sidewalk and waterside cabanas.

Del Mar will join the $2 billion Wharf project from Madison Marquette and PN Hoffman, which will have retail and office space, condos, hotels, a marina and a music venue from the 9:30 Club. Other restaurants include Requin, a French and Mediterranean seafood restaurant from Mike Isabella and Jen Carroll and an Asian restaurant from Cathal Armstrong of Restaurant Eve.

Secret Chopsticks, the Chinese restaurant that opened in November in Rosslyn’s Turnberry Tower, 1850 Fort Myer Dr., Arlington, one of the most expensive condominium buildings in the county, has closed after only three months according to a sign on the door. 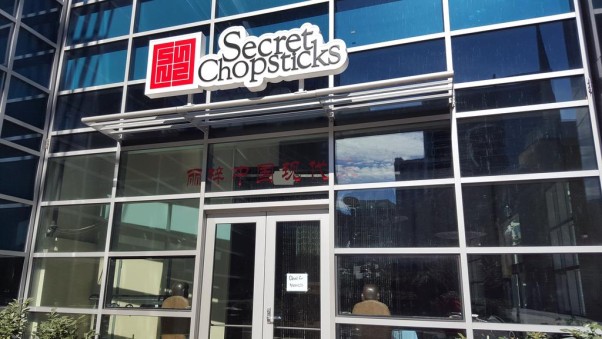 DC on Heels told you that things weren’t looking good for the restaurant back in early-January.

Chef and partner Robin Li planned to serve only nine-course secret tasting menus in the dining room from $59-$89 with a la carte items in the bar and lounge. But Li abandoned the tasting menu-only shortly after opening, and general manager and partner Malia Milstead and sommelier and assistant general manager Ralph Villar both left the restaurant in December. Besides the high prices and staff changes, the restaurant did not get good reviews from diners and there was no parking.

Anjorie, a new restaurant affiliated with Vandor Management LLC, applied for a Virginia ABC license at the same address on Feb. 23. The phone number of Anjorie is the same as Secret Chopstick’s. We could not get comment from Vandor or Secret Chopsticks.

There isn’t much information available about Anjorie except that it plans to serve wine, beer and cocktails and seat more than 150. 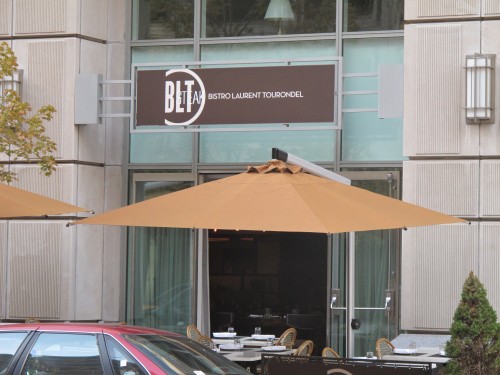 For each flavor, the staff takes the heavy cream and sweetened condensed milk base with Jameson and any combination of fresh, seasonal fruits and herbs blended together until smooth and creamy. They are then poured through a fine mesh strainer, bottled and chilled them until they are ice cold and ready for sipping or mixing into cocktails like a Grasshopper, a Leprechaun Walk into a Bar with Jameson, mint Irish Cream and chocolate liqueur and the Dubliner’s Breakfast with Bacardi 8, raspberry Irish Cream and Kahlua.

Macon Bistro and Larder, 5520 Connecticut Ave. NW, is offering four sour beers during March. The American beers are brewed with lactobacillus and/or brettanomyces that give the beer a tart and sometimes fruity taste.

Taco Bamba, 2190 Pimmet Dr., Falls Church, has launched a monthly guest taquero series. Each month, the restaurant will offer one taco by a guest chef, with each chef joining owner Victor Albisu for one evening behind the taco counter to make and sell their tacos in person.

During March, chef Tim Ma of Water and Wall, Chase the Submarine and the forthcoming Kyirisan, will offer his Ma’s Crabs taco, a corn tortilla stuffed with seared Maryland crab, green Goddess dressing, spicy slaw and chicharrones for $5 each. 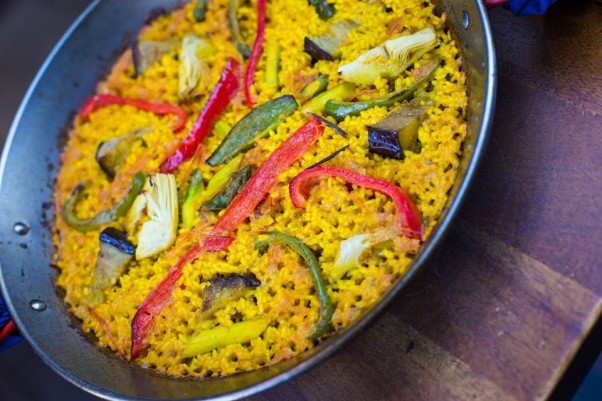 The pop-up is a tribute to chef Danny Lledó’s family homeland of the town of Denia in Valencia, Spain. The menu features authentic dishes from Denia. The local cuisine is typically that of the Costa Blanca, which combines delicacies from both land and the Mediterranean Sea. The Costa Blanca is rich in fish, especially the red shrimp of Denia, vegetables, olive oil, rice and fruit, and the area is known for such its Paella Valenciana, arrós a banda and dishes made with socarat, rice that gets crunchy on the bottom of a pan.

On Mar. 9, wines will be half off and on Mar.10 there will be a personal sommelier tasting of Spanish wines to go with the menu.

Raclette is from the Swiss Alps, where local herdsmen would set up camp in the winter and melt cheese on rocks near an open fire to fill their bellies and keep warm. The Fainting Goat will bring the tradition to the DMV with an evening full of gooey melted cheese, dippable accompaniments, butterscotch budino and ice cold beer for $65 per person.

Raclette is the Swiss version of fondue — a large wedge of raclette cheese is melted then scraped onto a warm plate and eaten with accompaniments like cornichons, fingerling potatoes, pickled onions and cured meats. Diners will sit at tables of eight and begin with salad and a cold beer. When the cheese is melted, guests can dip tableside-grilled accompaniments such as crusty bread, assorted charcuterie, baby potatoes, cauliflower and little gem lettuce into the melted cheese. Dessert will be a butterscotch budino.

To make reservations, call 202-735-0344 or email info@thefaintinggoatdc.com. Seating is limited to two seats per person.