As turkeys fill grocery store freezer cases, many people find themselves cooking more than they might during the rest of the year. Holding the title of household chef or Thanksgiving host doesn’t bring automatic food safety knowledge though – especially when transforming a several-pound piece of poultry into the centerpiece of a mouthwatering meal. 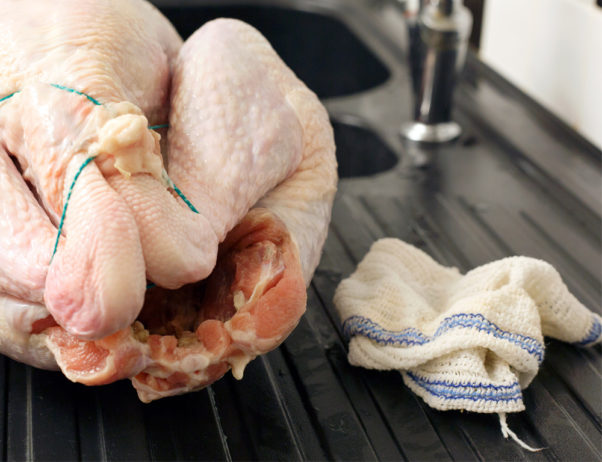 Turkeys should only be thawed in the refrigerator, cold water or the microwave. (Photo: jax10289/iStock)

Marianne Gravely, a senior technical information specialist with the U.S. Department of Agriculture’s Meat and Poultry hotline, said Thanksgiving dinner is probably the biggest culinary production most people will ever participate in.

“In addition to the sheer size of the bird, you’re cooking for a large group of family and friends and juggling a lot of side dishes,” she said.

Separate while you shop

“Keep any raw meat or seafood away from other foods in the cart,” he said. “You don’t want to put a raw turkey on top of your lunchmeat.”

Temperature control – keeping cold foods cold and hot foods hot – is essential. He said the danger zone – the temperature at which bacteria grows and thrives best – is between 40 and 140 degrees. Foods flirting with the danger zone can develop bacteria that lead to several different types of foodborne illnesses, the most common of which are salmonella, E. coli and listeria.

“You could get very sick or die from any of them,” Ulshafer said. “Bacteria can double in a 20-minute period, so that’s how fast it can grow.”

The Centers for Disease Control and Prevention estimates that approximately one in six Americans suffer from foodborne illness each year. Symptoms can include abdominal pain, nausea, vomiting, diarrhea, fever, chills, fatigue, headaches, muscle pain or blood in the bowel. In some cases, the illness is mild and can be confused with a stomach bug. When symptoms are severe or persistent, Ulshafer recommends seeking medical attention.

In the kitchen, keep such problems at bay by keeping things clean – washing hands and surfaces often – as well as separating raw and ready-to-eat foods during all stages of meal preparation.

Gravely said the one thing you don’t need to wash is your turkey. “I know a lot of people are horrified by that,” she said. “Washing isn’t going to make it safer because there will always be some bacteria left. The cooking is what will kill the bacteria.”

As washing the turkey could splash bacteria around the kitchen, she recommends opening it inside a sink so juices can drain, then transferring it immediately to a nearby roasting pan to avoid cross-contamination.

Gravely said there are only three safe ways to thaw a turkey – in the refrigerator, in cold water or in the microwave.

It takes about a day for every four or five pounds of meat to thaw in the refrigerator, then it is safe for another two days before cooking. Those who don’t plan that far ahead can submerge a frozen turkey in a sink of cold water that is replaced every 30 minutes. That method can take about 30 minutes per pound. Once the turkey is thawed, put it right in the oven. If you must defrost it in the microwave, plan to transfer it right to the oven to continue cooking.

“You never want to interrupt the cooking process,” she said.

Use a food thermometer

Cooking foods to proper internal temperature is a more reliable way to tell whether they are done than eyeballing. For a turkey, the magic number is at least 165 degrees in the thickest part of the breast, wing and thigh. Stuffing or casseroles with eggs or milk in them should also be cooked to a minimum of 165 degrees. 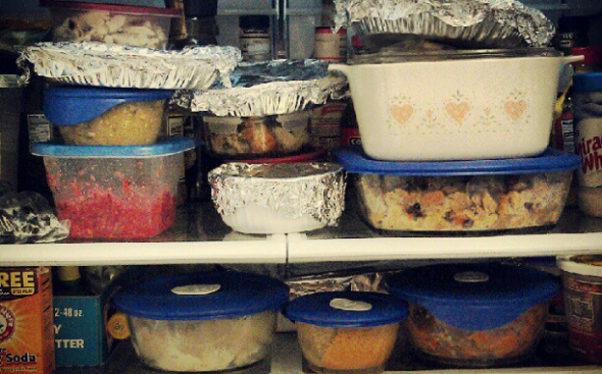 After a meal, Ulshafer recommends packaging and refrigerating leftovers within two hours rather than leaving them out to go back and snack on. Pack foods in small or shallow containers to help them cool down quickly.

A refrigerator packed to the gills with groceries can’t provide proper air circulation necessary to keep foods below 40 degrees when you add leftovers to the mix, so Ulshafer suggests cutting back on the amount of non-celebration groceries as a holiday approaches.

Leftovers can be refrigerated for four days or frozen. Perishable foods left out more than two hours should be discarded. And if you still have a frozen turkey from last year, it is still safe to cook. Gravely said, “Food poisoning bacteria doesn’t grow in the freezer.”