How to Cope with Coworking at Home

As measures to limit the spread of coronavirus ramp up across the country, more and more folks are lucky to have jobs that can be done remotely from home. As such, lately there has been a lot of chatter online about how to work from home effectively. The majority of the advice is the same: put real clothes on, set up a desk space that is not your bed and go about your morning routine as though you are actually heading to work. But the beauty of working from home is the ability to sit on your couch in holey underwear while you type up expense reports. If you live with your significant other, it might not be quite that simple. 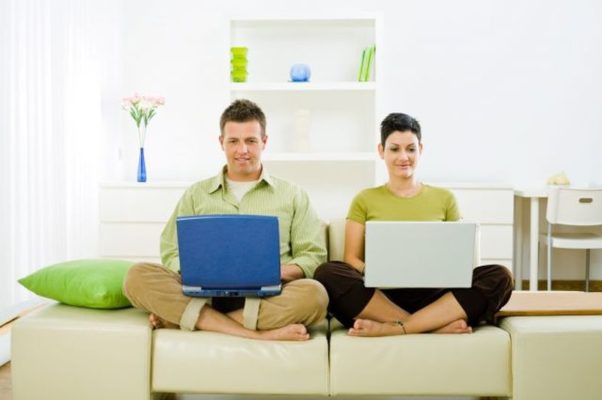 Hypothetically, working at home sounds great. But in practice, you might feel differently. (Photo: Shutterstock)

Hypothetically, it sounds great — getting to be around your boo all day every day, for weeks on end. That is probably all you wished for back when you first got together and were having sex seven times a day. But when your partner excitedly barges into the room to show you that video of the penguins touring an aquarium, interrupting your train of thought for the third time while you try to draft a delicate email to your boss, you might feel differently.

Keith Pandolfi, a writer who is now working from home alongside his wife, tweeted, “To my wife, who has a much more important job than I do — I am simply a lazy coworker who always wants to talk about my inner life and what I just saw on the internet while she’s actually trying to get shit done. If I worked for her she would fire me.”

Look, my boyfriend loves me, but he is less than enthused about the prospect of us both working from home full time. He is used to silent, slow days at home full of coffee-drinking and movie-watching (his actual, enviable job). When I work from home, on the other hand, I am like a pinball bouncing between the energy levels of a sleepy cartoon rat and a hurricane that drank a Red Bull. We have each worked from home on and off for five years, so we were a little prepared for this, but now, for the foreseeable future, we are stuck together-together — without nights out with friends or separate hobbies to provide a buffer. The best we can hope for is some alone time while one person takes a shower.

To figure out some coping strategies, I talked to a bunch of people who work from home alongside their partners normally (before COVID-19) to see what it is like and how they make it work.

Your apartment isn’t a university and you aren’t a professor (well, maybe you are), but you should maintain a normal work schedule while you are working from home. Not only should you stick to your schedule, but you should communicate with your partner each morning about what the day looks like. Remind them of any important calls you might have where you will need extra quiet or no interruptions. Share a Google calendar or even write one out on a piece of paper and stick it to the fridge.

If one of you is more prone to distraction and the other needs complete quiet to focus, schedule some planned breaks to talk to one another and check in so that you aren’t hurting anyone’s productivity. Robert Burroughs from New Brunswick, R.I., 28, said that while his partner tends to work at a rigid 9-to-5 schedule, “I tend to do sprints where I work hard for a couple of hours and then break for a bit and then work hard for a couple of hours.”

Remember, just because your workday is over, doesn’t mean your partner’s is. Christine from Atlanta, 26, said, “We both set our own hours for the most part, but it really helps if we work on the same schedule. It’s too easy to distract each other if one of us is working and the other is lounging or doing chores around the house.” 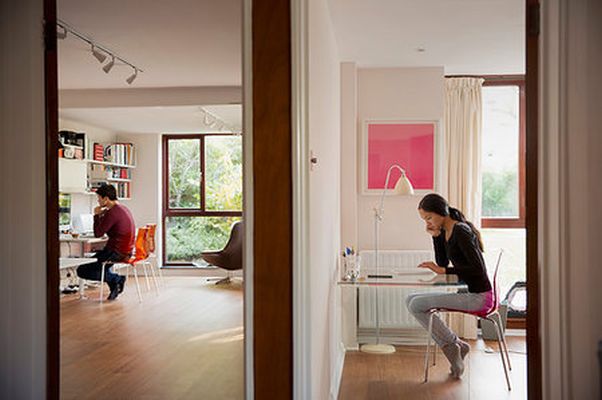 Ideally, you both should have your own workspace. (Photo: Getty Images)

The idea of working in proximity, playing footsie under the dining room table while you are both dialed into conference calls is romantic, but not great for actually working. If you have room in your house to do so, split up! Ideally, neither of you should post up in the kitchen, which should be a neutral break space, but if that is where you have to work, it is what it is. If you are stuck working in the same room, use headphones, be extra respectful about noise and interruptions, and try to carve out specific corners that are yours alone.

Don’t distract each other

Your productivity working from home may change compared to the office — in either direction. That is okay. You are not a machine, you are a person. You aren’t working every single moment you are in an office, so give yourself and your partner a break if you two get off track for a few minutes.

Obviously, you need to give your partner space during conference calls and important meetings, but respect their work hours throughout the day, too. You are coworkers now, so get used to asking coworker-type questions like, “Do you have a minute?” rather than simply walking into their workspace and talking about the tweet you just saw or the dump you just took. That said, as Christine pointed out that unlike with coworkers, you can be blunt. “At least with my husband, I can say ‘Dude, I’m really busy — can you just show me the meme later’ without sounding rude.”

Take lunches and walks together

You don’t have to totally isolate yourself from your partner (unless you are sick, then do so as much as possible). Take advantage of the fact that you get time together that you don’t usually. Pandolfi said he and his wife eat lunches together when they are both working from home. “It’s almost like a date in the middle of the day,” he said. This will also give you a set time to talk about the aforementioned tweet or big dump. Or our country’s stunning mismanagement of this crisis.

Working from home usually translates to even more hours of the day spent seated or supine than a traditional office setups does, so get up, go outside and take a walk for at least 10 or 15 minutes, ideally longer. Hold hands, even! (Just don’t touch anything besides each other, or get within six feet of anyone else.)

End the day at the end of the day

One of the hardest parts of working remotely is the blurred lines between the office and home. As Reese Cassard in Boulder, Colo., 26, pointed out, “The stress of work plays out in the same setting as so many other important parts of our relationship. If I’m having a rough day, it’s hard not to carry frustration or doubt from work right into cooking dinner a few hours later because I’m literally in the same space.” Do your best to turn off work when it is over. Take a shower, change clothes, take another walk, pour a drink. Do something to signify the end of the work day, that it is time to be back in your house with the person you bone.

Enjoy the sex, avoid the fights

I took two informal, non-scientific Twitter polls asking people who are now working from home with their partners if they are fighting more or less than usual, and if they are having sex more or less than usual. To the surprise of perhaps no one, couples said they were having both more arguments and more sex (although arguments increased more than sex, unfortunatley). Being home this much with a partner is a bit like a pressure cooker, so make sure to communicate clearly and exercise extra patience. The more boundaries you create early on, and the more you talk about how you like to work, the better.

That said, many couples reported enjoying the newfound time together. Christine said that mutually working from home “lets us take care of each other in ways that weren’t possible when we were commuting. I can make him lunch when he’s slammed at work, he can run an errand for me if I have a conference call and can’t leave the house.” And, of course, there is nothing like replacing your morning commute with a morning hookup.