We all love our sugar, especially during the holidays. Cookies, cake, and candy are simply irresistible. While sugar cravings are common, the physiological mechanisms that trigger our “sweet tooth” are not well defined. 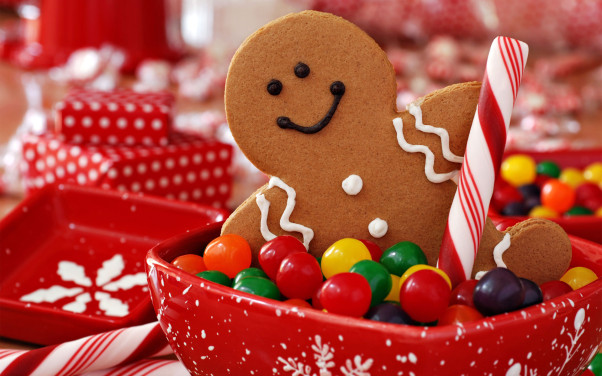 We all love our sugar, especially during the holidays. But a study shows that the FGF21 hormone made in the liver suppresses consumption of simple sugars. (Photo: christmasxcite.com)

A study by the University of Iowa, the University of Texas’ Southwestern Medical Center and the University of Copenhagen in Denmark on mice shows that a hormone produced by the liver, fibroblast growth factor 21 (FGF21), suppresses the consumption of simple sugars. The researchers report that FGF21 is produced in the liver in response to high carbohydrate levels. FGF21 then enters the bloodstream, where it sends a signal to the brain to suppress the preference for sweets.

“This is the first liver-derived hormone we know that regulates sugar intake specifically,” said Matthew Potthoff, assistant professor of pharmacology in the University of Iowa’s Carver College of Medicine and co-senior author of the paper, published online in the journal Cell Metabolism.

FGF21 is associated with environmental stress such as extreme dietary changes or cold temperature exposure. It is also produced when mammals consume carbohydrates. Because of FGF21’s unique effects, forms of the protein are being evaluated as drugs for the treatment of obesity and type 2 diabetes. “Our findings raise the possibility that FGF21 administration could affect nutrient preference and other reward behaviors in humans, and that the hormone could potentially be used to treat alcoholism,” said Dr. Steven Kliewer, professor of molecular biology and pharmacology at UT Southwestern and co-senior author.

Previous research explains how certain hormones affect appetite; however, these hormones do not regulate any specific macronutrient (carbohydrate, protein, fat) and are produced by organs other than the liver. The research could improve diet and help patients who are diabetic or obese.

“We’ve known for a while that FGF21 can enhance insulin sensitivity,” said Lucas BonDurant, a doctoral student and one of the study’s co-authors. “Now, there’s this dimension where FGF21 can help people who might not be able to sense when they’ve had enough sugar, which may contribute to diabetes.”

The work is based on human genome-wide studies where researchers found associations between certain DNA mutations and people’s intake of specific macronutrients. Two of these mutations were located near the FGF21 gene, prompting the team to identify the role of this hormone in regulating macronutrient preference.

Researchers used genetically-engineered mouse models and pharmacological approaches to examine the role of FGF21 in regulating sugar cravings. Normal mice were injected with FGF21 and given a choice between a normal diet and a sugar-enriched diet. The mice didn’t completely stop eating sugar, but they ate seven times less than normal.

Mice with elevated levels of FGF21 showed reduced preference for sweetener- and alcohol-laced water as well as a marked decrease in levels of dopamine, a neurotransmitter that plays a central role in reward behavior. 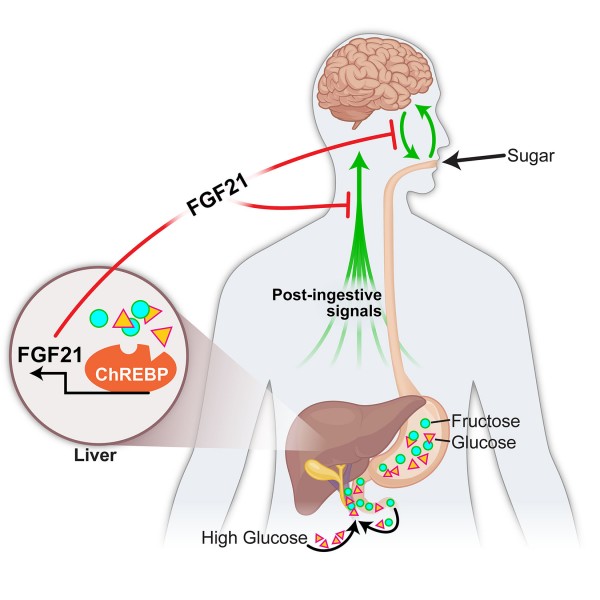 A new study has identified a hormone that appears to be involved in sugar cravings and consumption. The research could improve diet and help patients who are diabetic or obese. (Graphic: University of Iowa)

Based on these results, the team concluded that FGF21 decreases appetite and intake of sugar. However, FGF21 does not reduce intake of all sugars such as sucrose, fructose and glucose equally. FGF21 also doesn’t impact the intake of complex carbohydrates.

While the study found that FGF21 sends signals to the brain, additional work is necessary to identify the precise neural pathways that regulate FGF21’s ability to manage macronutrient preference. “The finding that FGF21 acts via the brain was completely unexpected when we started down this path of investigation a dozen years ago,” Kliewer said. “These findings suggest that additional studies are warranted to assess the effects of FGF21 on sweet and alcohol preference and other reward behavior in humans.”

UI researchers are focused on the hypothalamus — a section of the brain responsible for regulating feeding behavior and energy homeostasis. “In addition to identifying these neural pathways, we would like to see if additional hormones exist to regulate appetite for specific macronutrients like fat and protein, comparable to the effects of FGF21 on carbohydrate intake,” Potthoff said. “If so, how do those signals intertwine to regulate the neural sensing of different macronutrients?”