Master mezcalier Josh Phillips is planning to open Espita Mezcaleria at 1250 Ninth St. NW in Shaw near the Convention Center in early January. 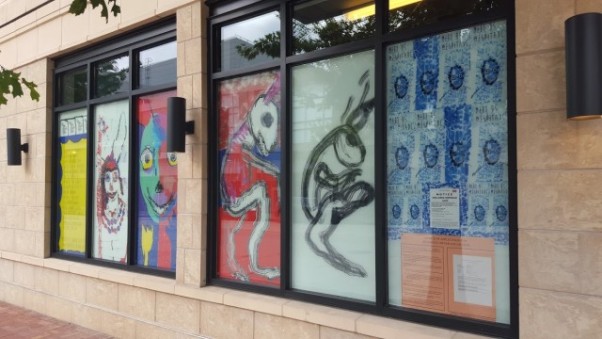 The 122-seat restaurant will specialize in authentic flavors of Oaxaca, with a focus on the region’s seven styles of mole. A collection of sopes and ceviches will also be available along with tacos and tlayudas made with hand-pressed heirloom corn tortillas. It will also offer an expansive, rotating collection of mezcals.

Alexis Samayoa will be the restaurant’s executive chef. A native of Brooklyn, Samayoa credits his culinary inspiration to watching countless hours of Chef Rick Bayless cooking Mexican fare on PBS. He also picked up cooking techniques along the way while preparing Puerto Rican recipes with his mother and authentic Guatemalan cuisine with his father.

A culinary graduate of The Art Institute of New York City, Samayoa began his career in 2002 while serving as a chef de partie at WD-50 in Manhattan. In October 2008, Samayoa began working as a sous chef at Txikito, a Spanish small plates restaurant. In February 2011, he became chef de cuisine of Empellón Taqueria, where he worked for almost two years before accepting a position as chef de cuisine of La Esquina. He worked at La Esquina for six months before moving onto to serve as chef de cuisine of El Vez, Stephen Starr’s Mexican concept in Lower Manhattan’s Battery Park City. He accepted the position as executive chef of Tocolo Cantina in Garden City, N.Y., where he served from September 2014 until July 2015 when Phillips recruited him to relocate to D.C.

Espita Mezcaleria’s menu will feature rustic flavors that combine traditional Mexican and modern techniques. On the menu will be dishes such as mole negro with lamb; scallop ceviche with salsa verde, avocado and pickled jalapeño; duck carnitas tacos; and crab tlayudas. Prices will range from $8-$28.

The bar program will include an expansive, rotating selection of mezcals featuring many varietals and styles. Mezcal will be available in one or two-ounce pours, as a choice of flights or highlighted in a cocktail. There will also be pitchers for diners to share. Cocktails will be priced from $10-$16.

Rachel Phillips of Reid & Taylor Studios in New York City – the owner’s sister — designed the space. The interior takes the authentic Oaxacan feel and updates it with a modern approach and will feature authentic Oaxacan art. There will be a collection of murals by Yescka, an internationally renowned Oaxacan street artist and founder of the political art collection Assembly of Revolutionary Artists of Oaxaca.

The main dining room will seat 62 with a 16-seat bar and 10 additional bar stools, at the dining rail facing Ninth Street. A patio will be available during warmer weather with 44 seats.

Get $3 Booritos at Chipotle on Halloween 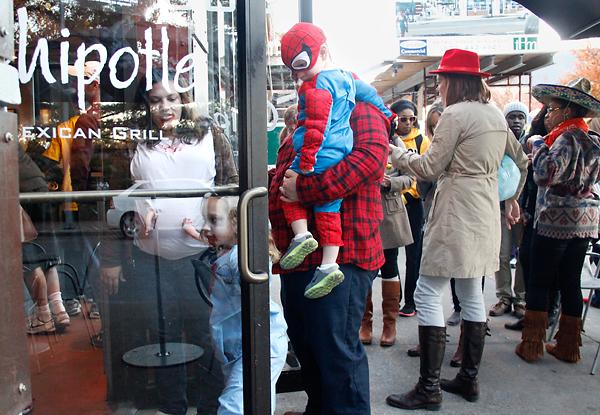 Costumed diners line up at Chipotle for a $3 Boorito. (Photo: Xiaojie Ouyang/The Missourian)

All Chipotle locations will offer $3 burritos, salads, bowls and tacos to diners who arrive dressed in costume. This year, Chipotle is shaking things up and asking its costumed customers to add an “unnecessary” element to their outfits — like a bearded fairy, ghost with a cowboy hat or vampire in a tutu—to showcase the simplicity of Chipotle’s ingredients, devoid of the extraneous additives typically found in fast food.

Proceeds from Boorito, up to $1 million, will benefit the Chipotle Cultivate Foundation, which provides resources for farmers, promotes better livestock husbandry, fosters food literacy and nutritious eating, and more. 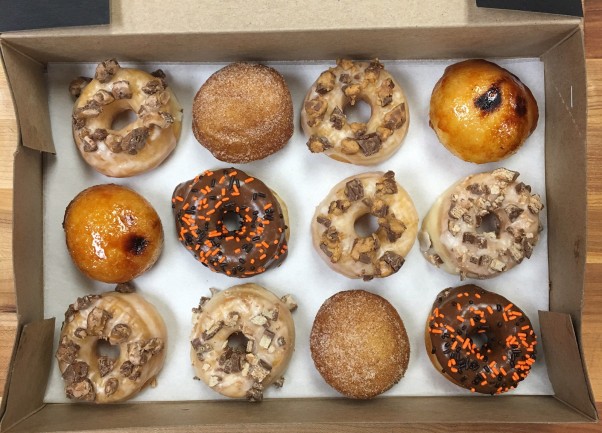 The boxes will be available at both locations today. Astro will also give a free doughnut to the first 30 people in costume at each location.

On Halloween, the downstairs bar at Pizzeria Paradiso Georgetown, 3282 M St. NW, will host a costume party starting at 5 p.m. Halloween-themed drafts and cocktails will be served, along with an Orange, White & Black pizza made with carrot puree, Jack and cheddar cheeses, a black bean salad and sour cream. 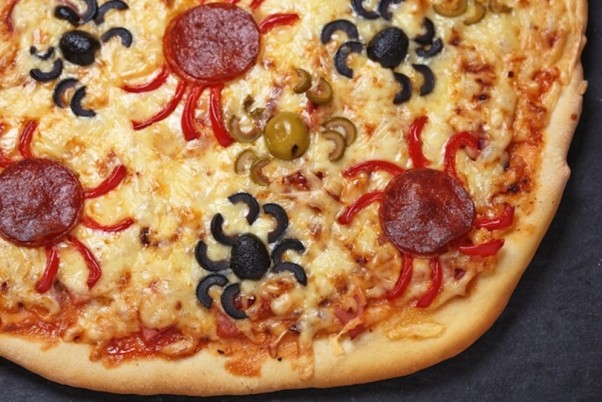 Pizzeria Paradiso Georgetown is having a Halloween tap takeover with a special Halloween pizza beginning at 5 p.m. today. (Photo: Shutterstock)

Prizes will be given for best dressed, as well as those in beer-themed costumes. 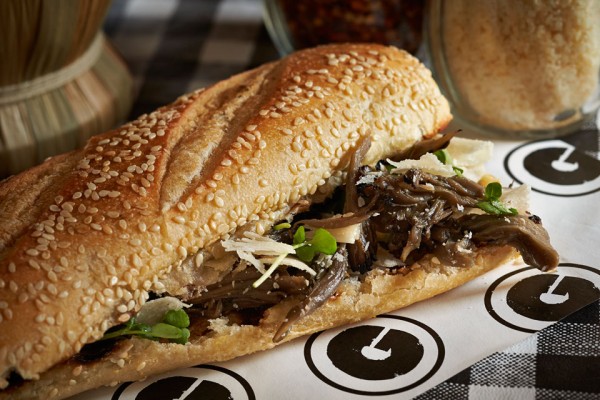 G is selling all its sandwiches for $7 for National Sandwich Day on Tuesday. (Photo: Greg Powers)

Diners are encouraged to place orders online to avoid lines. 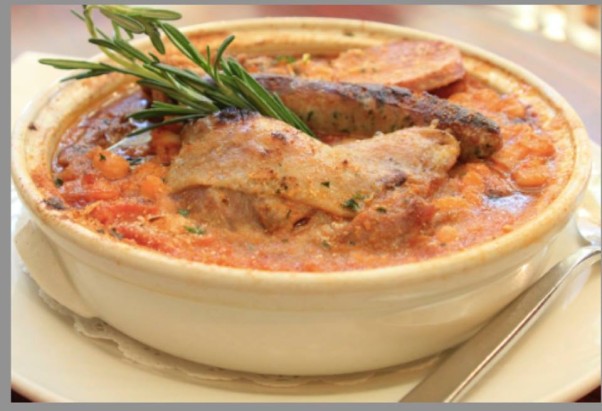 At dinner, the bistro has a variety of choices with apps including garlicky escargot ($12), duck galantine ($14), sautéed sweetbreads ($14), charcuterie, pate and more. Salads include red pepper mousse ($13), roasted beets with arugula and horseradish dressing and salad nicoise ($15). Entrees include beef Bourguignon ($26), seafood feuillete ($26) and lamb stew ($24).

Blue Duck Tavern in the Park Hyatt Washington, 1201 24th St. NW, has appointed Franck Loquet as executive chef and David Collier as pastry chef. Loquet replaces Ryan LaRoche who returned to Chicago after a year, while Collier replaces Naomi Gallego, who is now executive pastry chef at Neighborhood Restaurant Group, which owns Birch & Barley, Iron Gate and Vermilion among others here in D.C. 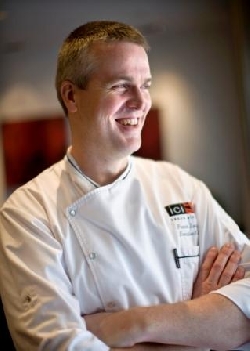 A native of France, Loquet most recently was executive chef at Ici Urban Bistro in the Hotel Sofitel Washington, D.C. Lafayette Square since June 2011. He relocated to the United States from Paris, where he worked for Alain Ducasse from 2008-2011 and provided culinary training for professional chefs and focused on menu consultation, recipe development and testing for Alain Ducasse Enterprise. He also helped open Ducasse’s first school for amateur cooks, Ecole de Cuisine Alain Ducasse, in Paris, leading individual and group classes as well as corporate events.

He also worked under James Beard award-winning chef Adam Siegel at the 180-seat Bartolotta’s Lake Park Bistro in Milwaukee, and served as the executive sous chef for Calihan Catering of Chicago. His culinary experience includes working at multiple one and two-star Michelin restaurants throughout Europe including Ze Kitchen Galerie in Paris, cooking with William Ledeuil, winner of the “Chef of the Year 2010” by the Gault Millau guide; Midsummer House Restaurant in Cambridge, England and at Inverlochy Castle in Fort William, Scotland, among others.

Collier is returning to D.C. after serving as the corporate pastry chef for Knife Modern Steak & Oak in Dallas since February 2014, where he work with Top Chef contestant John Tesar. Prior to Knife, Collier worked two years as the pastry chef for Spoon Bar & Kitchen in Dallas.

His career also includes serving as the executive pastry chef for three years at the Rosewood Mansion on Turtle Creek in Dallas. Collier also worked with Laurent Lhuillier at the Ritz Carlton in Tysons Corner. From 2003 to 2007, he served as the pastry chef and then corporate pastry chef for Kinkead’s Colvin Run Tavern and Kinkead’s American Brasserie. An Academie D’Cuisine graduate, Collier is a James Beard semifinalist for National Pastry Chef of the Year in 2009.

Brad Deboy, who has been chef de cuisine at the restaurant since 2014, will continue to lead the Blue Duck’s kitchen while Loquet oversees the entire operation as well as the hotels food service. Big changes are not expected and staples, such as Blue Duck Tavern fries and apple pie, will remain on the menu.

Ryan Ratino in as chef de cuisine at Masa 14 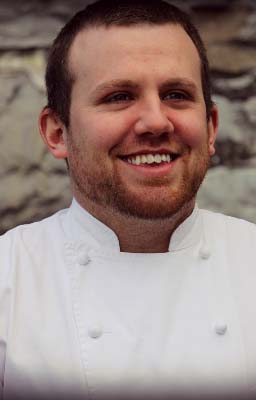 He began his culinary career at the Bull and Bear at the Waldorf Astoria Orlando and at the Old Hickory Steak House before graduating from the Le Cordon Bleu Orlando in 2011. Most recently Ratino served as the executive chef at the acclaimed L’Auberge Provencale in White Post, Va., where he was responsible for the daily operations at the inn’s restaurant; the in-room dining program, off-site picnics; and overseeing the expansive orchard, vegetable and herb garden.

Ratino launched his culinary career as a junior sous chef at Shula’s Steak House at Walt Disney World’s Swan and Dolphin, before transitioning to its Bluezoo restaurant. During his three years at Todd English’s Bluezoo, he was promoted from sous chef to chef de cuisine and then executive chef. He then moved to New York City as executive sous chef at Caviar Russe. His career also includes WD-50 in Manhattan. 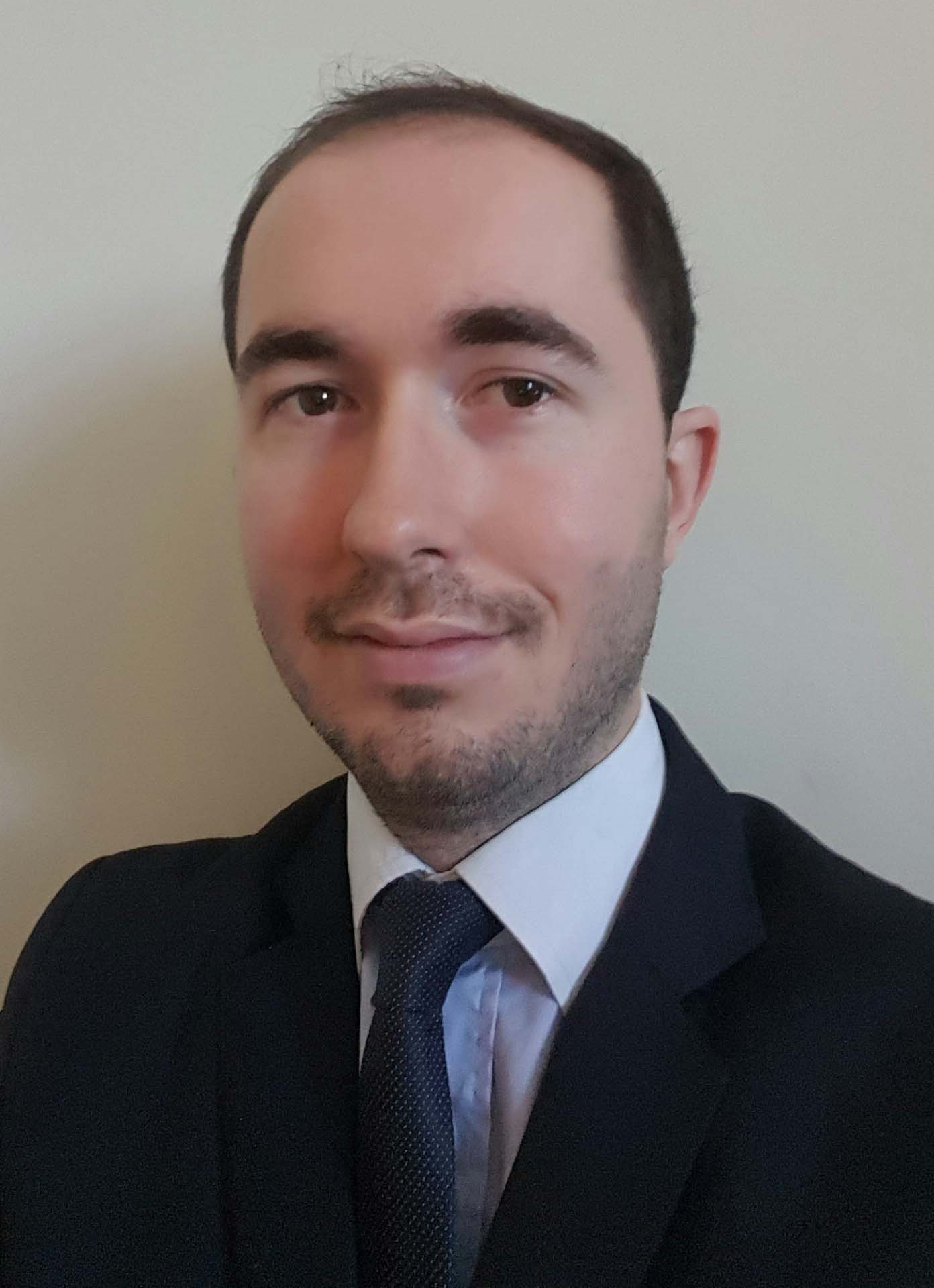 A native of Paris, France, Cabre earned a BA in Hospitality, Finance and Revenue Management in 2010 from The Glion Institute of Higher Education in Bulle. Prior to joining Et Voila!, he was manager of Café Kousmichoff, Kusmi Tea in Paris located on the Champs Elysées. He has also managed Restaurant Pinxo and was room service manager at the Renaissance Paris Vendôme. He also managed Restaurant le Louvre Ripaille in Paris.

From 2010-2011, he trained at the Hyatt Regency Reston. Also prior to graduating, Cabre worked at the Hotel Quaryati in Marrakech, Morocco and at the Hotel Arts, Ritz Carlton in Barcelona.

Cabre will be responsible for the restaurant’s daily operations and developing the beverage program introducing an expanded wine list and new cocktails. He will also help grow the catering business for private event off-site services.