It’s the time of year when parents are celebrating the return to routine as their children return to school – unless you have a teenager. For parents of teens, getting their children to go to bed on time and get up on time can be a struggle. A lack of sleep can cause poor academic performance due to poor concentration, behavioral issues due to irritability, physical symptoms like fatigue and headaches, or mental issues like depression. 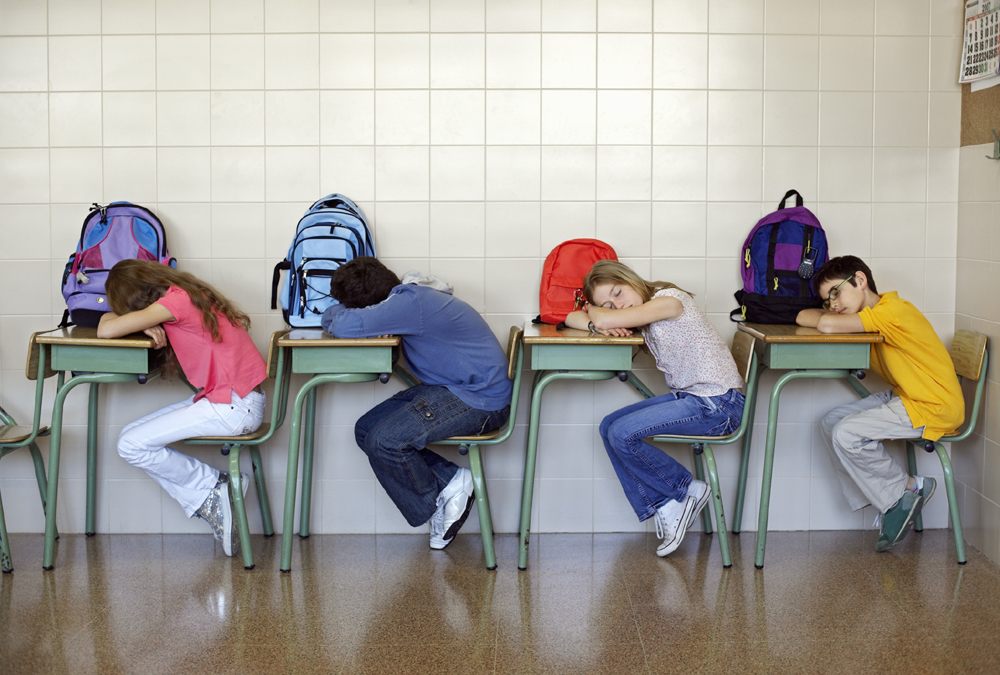 Students who don’t get enough sleep have poor concentration at school. (Photo: ThinkStock)

Recent recommendations from the Centers for Disease Control and Prevention (CDC) suggest that teens would benefit from a later school start time. As the decision on when classes start is not up to parents, how can they combat a teen’s natural habits?

Dr. Cheryl D. Tierney, section chief of behavior and developmental pediatrics at Penn State Hershey Children’s Hospital, says back to school preparations should include gradually adjusting bed and wake-up times by 30 minutes every two to three days, over a couple weeks. “It’s very hard – you’re combating the fact that teenagers think ‘I only have two weeks left, I want to enjoy them,’” Tierney said.

Dr. Harish Rao, director of the Pediatric Sleep Program at the Children’s Hospital, suggests that parents not make the mistake of letting teens catch up on sleep on the weekends. “On the weekends, they’re waking up on California time and on weekdays they’re waking up on Eastern time,” Rao said. “Because their internal clocks do not shift very easily, there should be some consistency.”

Both doctors agree that weekend and weekday sleep and wake times should remain within a two-hour range.

Good light exposure upon waking helps internal clocks and brains to sync with outside time. Parents can help by scheduling their children’s activities to finish early enough to allow time to wind down and get enough sleep. Additionally, drinks with sugar or caffeine should be avoided, especially after 3 p.m.

Parents should not let teens take their smartphones and electronics into their bedrooms. Every person, regardless of age, should stop using devices at least an hour before bed so the light the devices produce does not interfere with the body’s natural melatonin production. That time can instead be used to engage in a relaxing activity like listening to music or reading to promote sleep.

According to Rao, many of his patients and their parents make the mistake of skipping breakfast. “This compounds the problem, as they’re getting to school sleepy and they don’t have the energy,” he said.

Adolescents need between 8.5 and 9.5 hours of sleep each night. However, teens are often up until 11 p.m. or later because of sports, after-school activities and homework. Because of this, school start times of between 7 and 8 a.m. are not ideal. “It’s just impossible to get the number of hours that are necessary for teens to have an optimal night’s sleep to be able to function and learn,” Tierney said.

It all comes down to hormones. “Their natural circadian rhythm, as they get older, is to go to bed later,” Tierney said.

This is the basis for the CDC’s report. Younger children naturally go to bed earlier and wake up earlier so the elementary school students would do much better going to school earlier, coming home earlier and getting to bed earlier. This recommendation is new and any changes that result will not happen overnight.

In the meantime, Tierney recommends children exercise, eat right and do their best to sleep well. “It all plays a role together for them to have maximum performance in school and for them to be able to retain the information,” she said.

Rao also believes that educating both parents and children, particularly teenagers, about the importance of getting adequate sleep is important. “If they realize that getting enough sleep will result in better grades and help them feel better, they’ll probably do it,” he said.