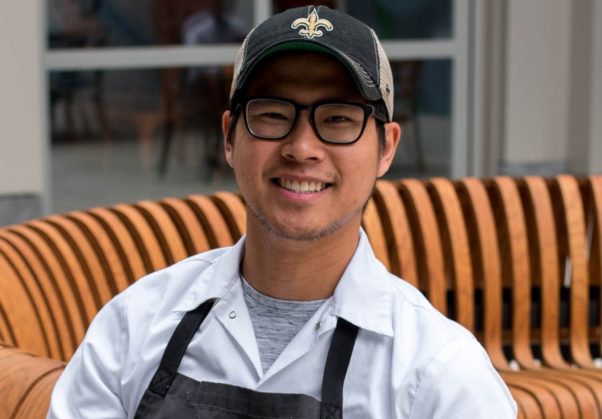 Tien’s last service at the tiny Japanese-inspired restaurant, which he opened with Carlie Steiner in November 2016 at 828 Upshur St. NW, will be Sept. 15. He plans to open the much larger Emilie’s, a 5,175-square-foot restaurant at 1101 Pennsylvania Ave. SW in September in the new Penn Eleven building on the site of the former Frager’s Hardware.

“I can’t thank our loyal guests and the Himitsu family enough for making Himitsu the incredible success that it is today,” Tien said in a press release. “While this was a very difficult decision to make, I’m looking forward to writing the next chapter and sharing my passion with the community on a larger scale and a different service style.”

Tien is giving up his ownership stake and turning over full control to Steiner, who will continue to own and operate Hitmitsu with chef Amanda Moll, former executive sous chef at Doi Moi, as executive chef.

“I am confident that Himitsu will continue to deliver the exceptional experience that our guests have enjoyed over the last 2 ½ years,” said Tien.

Emilie’s will be a 100-seat restaurant will server a globally-inspired menu that focuses on seasonal and local ingredients, and will feature large family-style plates with a small a la carte menu. Diners will be able to choose small plates circling the room on carts. Some of the rotating carts will be themed, such as the raw bar featuring oysters and crudos, while another cart will have pickled and fermented items. The carts will also give diners the opportunity to sample a variety of dishes.

The menu will change often and the food will be more contemporary than at Hitmitsu.

A Lafayette, Louisiana, native with a Vietnamese heritage, Tien began as a sushi chef working in Louisiana then Texas. He later came to D.C. and worked at Pineapple and Pearl, Momofuku CCDC, Oyamel and Uchi before opening Hitmitsu where he melded flavors and techniques from Southeast Asia, the American South and Latin America, which landed the restaurant on Bon Appétit magazine’s list of 50 best new restaurants nationwide shortly after opening, and Food & Wine named Tien one of its best new chefs. Tien was also a semifinalist for the James Beard Foundation’s Rising Star Chef award in 2018. He also competed on Food Network’s Iron Chef Gauntlet that same year.

Emilie’s will initially be open for dinner, then expand into lunch and brunch after its opening. Emilie’s will seat approximately 100 guests in the main dining room and at the bar.

Bibiana to be replaced by Modena

Knightsbridge Restaurant Group will close Bibiana Osteria-Enoteca restaurant, 1100 New York Ave. NW, on Aug. 31 and reopen it on Sept. 8 as Modena on Sept. 9 with a new menu and new executive chef John Melfi. 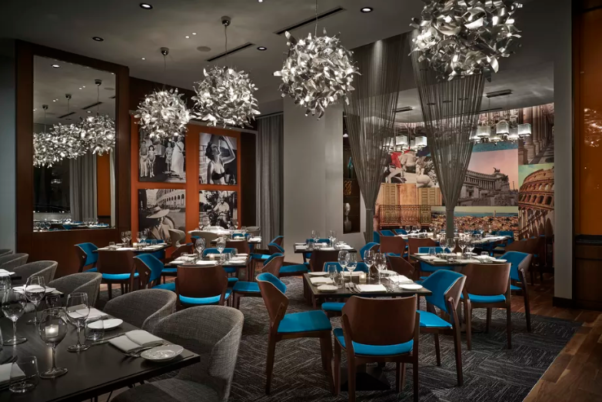 Bibiana Osteria-Enoteca, which was remodeled less than two years ago, will close Aug. 31 for another remodel and reopen as Modena. (Photo: Knightsbridge Restaurant Group)

Melfi comes from a short time at Robert Wiedmaier’s restaurant group. He previously was executive chef at Knightsbridges’ The Oval Room. He has moved around often with other stints as executive chef at Fabio Trabocchi’s Fiola and Fiola Mare. He has also worked at the shuttered Vidalia and Blue Duck Tavern. Bibiana’s former executive chef Loris Navone has left the company.

Once Bibiana closes at the end of the month, the restaurant will undergo a refresh with a new color scheme, new artwork and the addition of planters filled with greenery. Melfi’s new menu will showcase Italian-influenced seasonal cuisine driven by sustainable, locally sourced ingredients.

There will also be a new antipasti trolley from Italy with food served on vintage china made by Villeroy and Bosch. The antipasti will be served family-style with six to eight selections daily available until they run out. Items will range from chilled octopus salad, artichoke scafatta, marinated peppers and other local seasonal items like fresh beets.

“Bibiana has been a landmark restaurant since it opened in 2009, receiving recognition both locally and nationally, but it is time for a change,” owner Ashok Bajaj said in a statement. “We are pleased to have John Melfi back in the kitchen and Modena is going to bring a fresh, new approach that is not mired in only traditional Italian cooking. We want to provide guests with a more playful and creative menu that has a nod to Italian’s most cherished flavors and seasonal profiles on the plate. Modena will give us more freedom to showcase seasonal bounty without limitations.”

Modena will feature items from specific regions such as prosciutto di Parma, balsámico of Modena and Parmigiano Reggiano.

Dishes will include crescia, a rich dough made with lard that will be grilled and served with toppings that range from prosciutto and mascarpone cheese, to tuna crudo with olives and basil cream. Crudo will be served on 1,500-year-old Himalayan red rock salt. Melfi’s signature dish is chitarra pasta with Calabrian chili, sea urchin and jumbo lump crab. Additional highlights will include the veal ribeye, crispy sweetbreads, pancetta and a castelmango fondutta. There will also be pasta fagioli with pipe pasta, local coco rubio beans and Mount Vesuvio tomatoes, a dish from Melfi’s grandmother. Dessert will include amaretti cookies, a mainstay throughout Italy. 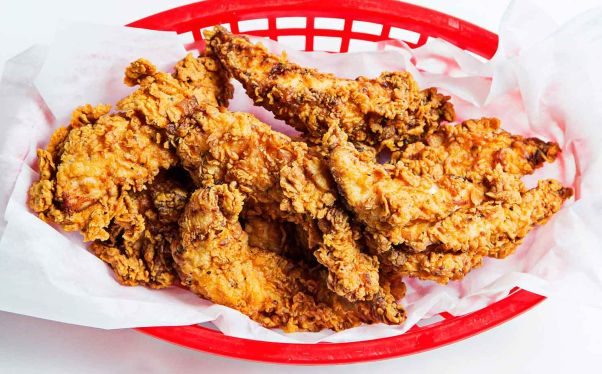 Astro Beer Hall will be an all-day counter service bar, coffee shop and restaurant serving breakfast, lunch, happy hour and dinner with an expanded menu of Astro’s fried chicken and doughnuts alongside bar snacks, salads, made to order cake doughnuts and more. In addition, it will offer a full-service coffee program using La Colombe beans and serve a variety of beers from 20 taps. Chef Chris Kujala from Astro Doughnuts & Fried Chicken will oversee the menus at both locations.

The 11,000 square foot space has been redesigned featuring imagery with astronauts and space exploration, a game room with Asteroids, Ms. Pacman, pinball and more. Guests will be able to watch sports and special events with additional TVs in the downstairs seating area.

The space is set to open in late summer, with next door’s Astro Doughnuts remaining fully operational throughout the remodel. Once Astro Beer Hall opens, Astro Doughnuts will remain take-out only, with the expanded ability for diners to eat next door. 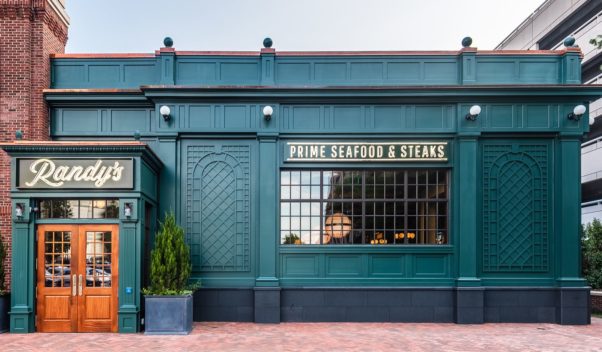 Desserts include Patsy’s carrot cake, a five-layer carrot cake with walnuts and cream cheese frosting; chocolate cake, Pavlova or the ultimate sundae served with vanilla ice cream and a choice of nearly a dozen toppings from grilled Myers’ rum pineapple to almond marshmallow. 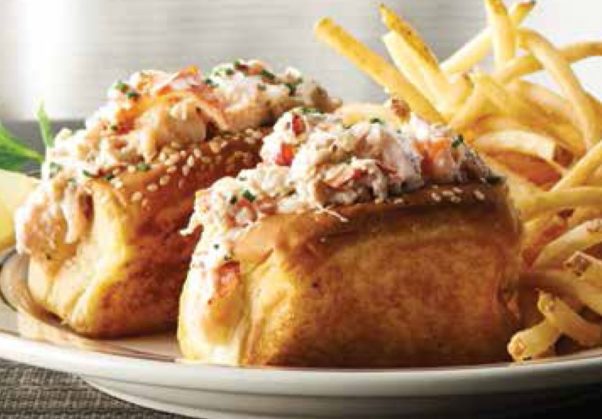 Oceanaire is offering its lobster roll on twin petite buttered rolls for $20 at the bar during National Sandwich month. (Photo: Oceanaire).

Through Aug. 31, the restaurant is serving its lobster roll — freshly picked North Atlantic lobster served on twin petite buttered rolls — for lunch and dinner for $20 at the bar. 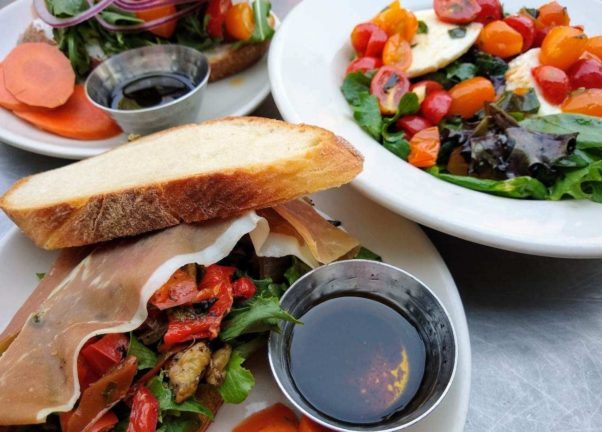 The salads are $11 and the paninis are $8. The restaurant is also serving blackberry sage sangria, a fruity red wine with fresh blackberries, lemon and sage, and peach tarragon sangria, a white wine with ripe peaches, lemons and a hint of tarragon. Both are $9.

For those who enjoy an occasional warm weather adult beverage, warm weather doesn’t mean it has to be a “white” spirit like gin or vodka, or the stereotypical chilled rosé. 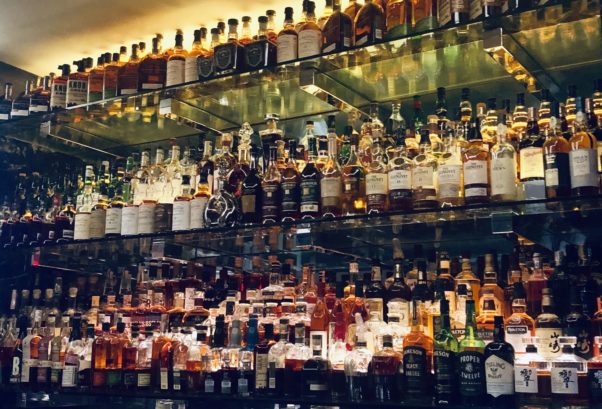 Mastro’s Steakhouse, 600 13th St. NW, features more 300 brown spirits. In the summer, the restaurant features exclusive whiskey flights with special food offerings for lovers of whiskeys and those interested in trying new and different varieties of this spirit from all over the world.

Flights include an ounce of each variety in a choice of Glen Moray: classic, chardonnay cask and port cask ($42); Isle of Islay: Ardbeg An Oa, Laphroaig Lore and Lagavulin distiller’s edition ($37); and Japanese: Kaiyō 7 Year; Hibiki Harmony and Fukano sherry cask ($33).

The dakshini menu is a four-course tasting menu featuring vegetarian and non-vegetarian dishes typically found in India’s five southern states. South Indian dishes are based around rice, lentils and stew. The region is famous for a wide range of spicy foods with each state differing from the others, predominantly from the spiciness of food, its different varieties and method of cooking.

On Friday, Aug. 30, the Hay-Adams, 800 16th St. NW, will host its next author series luncheon from noon-2 p.m. with New York Times bestselling author of Flight Behavior, The Lacuna and The Poisonwood Bible Barbara Kingsolver to discuss her latest work, Unsheltered. 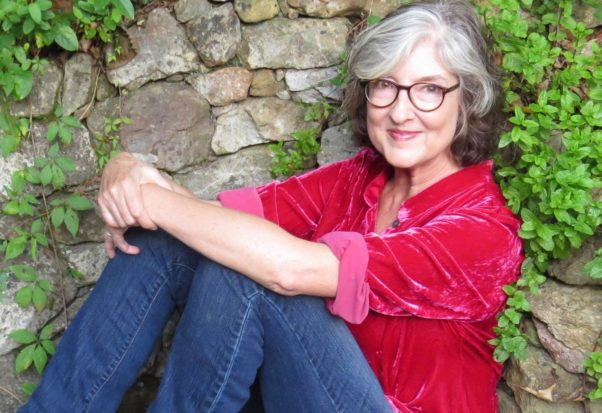 The ongoing author series includes food, drink and conversation in the Hay-Adams Room. Tickets are $90 per person, which includes a three-course, prix fixe lunch with wine pairings: The menu will be themed around the book

Kingsolver has won many awards including the National Humanities Medal, the country’s highest honor for service through the arts, as well as the Dayton Literary Peace Prize, the Orange Prize and multiple awards from the American Booksellers Association and the American Library Association.

Unsheltered interweaves past and present to explore the human capacity for resiliency and compassion in times of great upheaval. It is the story of two families, in two centuries, who live at the corner of Sixth and Plum in Vineland, N.J., navigating what seems to be the end of the world as they know it. With history as their tantalizing canvas, the characters paint a startlingly relevant portrait of life in precarious times when the foundations of the past have failed to prepare us for the future.

Kingsolver was born and grew up in rural Kentucky. She earned degrees in biology from DePauw University and the University of Arizona and has worked as a freelance writer and author since 1985. She has two daughters. Her husband teaches environmental studies. At various times in her adult life, she has lived in England, France and the Canary Islands, and has worked in Europe, Africa, Asia, Mexico and South America. Kingsolver spent two decades in Tucson, Ariz., before moving to southwestern Virginia. She currently resides on a farm in southern Appalachia, where she and her family raise an extensive vegetable garden and Icelandic sheep.

Kramerbooks will be selling copies of Unsheltered, which published Oct. 16, as well as other books by the author. Kingsolver will be available to sign and personalize books after the luncheon.

Tickets must be purchased by Aug. 23 and will not be available at the door.