More bad news for disgraced restauranteur Mike Isabella. As we predicted two weeks ago, Isabella Eatery, the giant food hall at Tysons Galleria, 2001 International Drive, McLean, has closed and his Kapnos Taverna inside the Hotel at the University of Maryland, 7777 Baltimore Ave., College Park, is being sued for more than $63,000 in back rent. 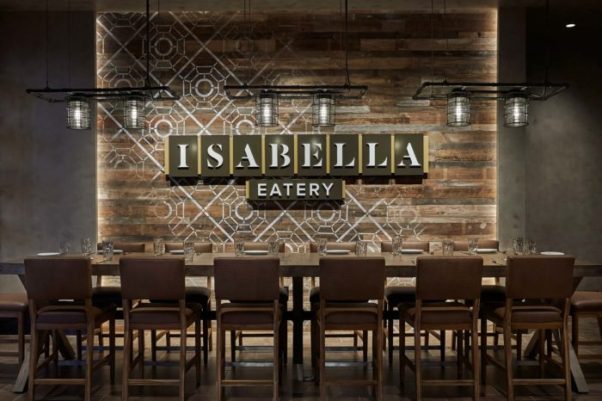 Isabella Eatery closed at 3 p.m. last Friday despite Isabella’s insisting it was going to remain open, becoming his fourth restaurant to close this year following the out-of-court settlement of a federal sexual harassment lawsuit filed against Isabella and his business partners by former Isabella Eatery director of operations Chloe Caras. The restaurant only opened last December.

“Restaurants close when their operating expenses exceed the revenues the restaurants generate, Isabella Eatery is no exception,” Isabella said in a statement. “Perhaps Isabella Eatery missed the mark because I became too impressed with myself and thought I [could] make anything work. Perhaps it was because of the way I presented our offerings at Tysons Galleria. Perhaps the space was too grand or perhaps the dining public was just not as excited as we were about a ‘restaurant emporium’ like the one we tried to provide. Whatever the reasons, we gave it our best shot.”

Rich Dinning, senior general manager of Tysons Galleria said in a statement on Friday that the mall is “fully committed to an upscale food hall concept that compliments the luxury experience,” at the mall. “Our guests embraced it and we believe our community deserves an amazing experience. In an effort to ensure that our vision carries on, we ended our relationship with the current operator. We are excited about the number of local and national restauranteurs interested in turning our vision into a new reality and will share more information soon.”

The restaurant, which started with nine different concepts including Requin, Arroz, Yona, Pepita, Kapnos and Graffiatto, has been in trouble for some time. Employees reported their paychecks bounced, and most of the kitchens at the 41,000-square-foot venue were combined into one with a stripped-down menu and reduced staff. Also, the space was quietly being shopped around.

Requin Brasserie in Fairfax’s Mosaic District was the first of his restaurants to shutter, then Graffiato Richmond closed followed by Isabella’s flagship Graffiato in Chinatown.

We have also learned that Southern Management Corp., which owns the Hotel at the University of Maryland, is suing Kapnos Taverna in Prince George’s County Circuit Court for $63,566.92 in back rent from January through April. The suit was filed on May 15. Isabella wasn’t served his court summons until July 31.

It is the third lawsuit for back rent including more than $715,000 owed to a subsidiary of Edens for Requin Brasserie and nearly $55,0000 owed to Douglas Development for Graffiatto in Chinatown.

But Isabella told Washingtonian magazine Kapnos Taverna is not closing (although he claimed Isabella Eatery and Graffiato weren’t closing either).

“Did we plan on having a slow summer? Yeah. But I’m not shutting down. We’re in the busy season now,” with classes resuming today, Isabella told the magazine. “We’re in negotiations. I hope everything is going to be fine. You know what makes everyone smile a little more? Seeing revenue. When you give people money they won’t bother you. Hopefully come Monday, we’ll have a good week.”

Isabella and chef/partner George Pagonis opened that location of Kapnos Taverna last September. There is another location in Ballston. According to court documents, they have a five-year lease.

Guapo’s, the local Tex-Mex chain that started in Tenlytown 27 years ago, is opening a new restaurant in the upscale Georgetown Waterfront, 3050 K St. NW, in the former Orange Anchor space today, Aug. 27. 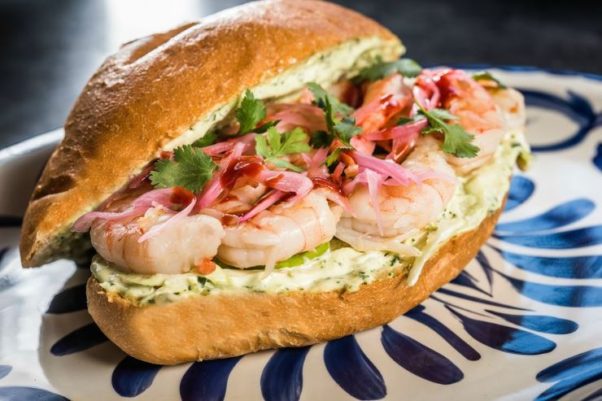 The newest Guapo’s, which opens in the Georgetown Waterfront on Monday, will include items such as shrimp tortas, Mexican sandwiches. (Photo; Rey Lopez)

Owned by the Rincón family, the local chain now has six full-service restaurant and three fast-casual rotisseries in the DMV.

Designer Ernesto Santalla created a courtyard feel with greenery on the 40-seat outdoor patio that overlooks the fountain. Inside the 100-seat restaurant, you will find earth tones with pops of red and orange, smooth industrial floors and linear lighting. However, you won’t find any neon Corona signs, sombreros or Mexican flags.

The restaurant will keep its core menu with sizzling steak and chicken fajitas and enchilada platters with prices ranging from $8-$30.

New co-executive chefs Nathan Breedlove, who formerly worked for Le Diplomate and José Andrés’ ThinkFoodGroup including Oyamel, and Sergio Galindo are adding ceviches, salads and tortas — Mexican sandwiches — including a Baja-style shrimp torta with cilantro-lime slaw, avocado and pickled onions. There will also be a variety of street-style tacos with house-made corn and flour tortillas with fillings such as sour orange-braised pork; mushrooms with macha, epazote and lime; or beef tongue with radish and cilantro. There will also be a new brunch menu with chilaquiles, huevos rancheros and pozole soup. New pastry chef Elissa Reyna will also be adding sweets like a flourless chocolate cake to the menu.

In addition to its classic margarita, a mezcal and tequila closet holds almost 50 bottles, including some pricier options designed to sip by the ounce.

Little Sesame to reopen in new location on Tuesday 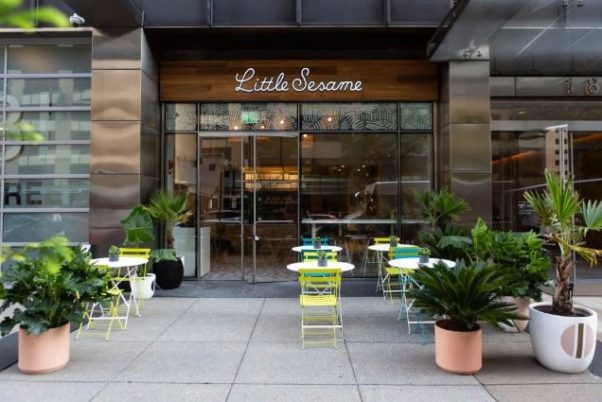 The restaurant, owned by cousins Nick and Dave Wiseman along with chef Ronen Tenne, closed in February when adjoining sister-restaurant and upstairs neighbor DGS Delicatessen closed. It is now a few blocks from its old home in the former Veloce pizzeria space with an expanded menu.

Five pita sandwiches, all with a smear of hummus, are new on the menu. Options include the Breakfast All Day with avocado, chopped radish and kohlrabi salad, lemon juice, za’atar and a 10-hour egg cooked in coffee grinds and onion peels; summer greens with mint pesto, chili oil and pickled Fresno chili; whole roasted cauliflower with tahini, turmeric pickle and green onion; chicken shawarma with tahini, amba and smashed cucumber salad; and roasted eggplant with green schug, tahini and pickled red cabbage.

The six hummus bowls from the former location return topped with roasted cauliflower and “everything spice” or a seasonal mix of sweet corn, slow-roasted onions, pickled Fresno chilies and taalia, an Egyptian condiment made with roasted garlic, cumin and coriander.

Sandwiches and bowls are priced from $8-$10.

Salatim, or salad offerings have also expanded to include things like turmeric pickles or watermelon fattoush (bread salad) with herbs and peanut dukkah made from nuts, herbs, and spices. Drinks include Mexican Coke, kombucha and a purple butterfly pea flower lemonade spiced with coriander.

Dessert includes rotating, dairy-free soft-serve ice creams, which will be vanilla-tahini, chocolate Turkish coffee or the two swirled together to begin. Cones can be topped with cocoa nibs, halva dust or “soomsoom crumble” with sesame and rose petals.

The 1,400-square-foot space was designed by Edit Lab at Streetsense and is done in wavy pink wallpaper, teal wall tiles and green plants.

The Smith on U Street now serves lunch 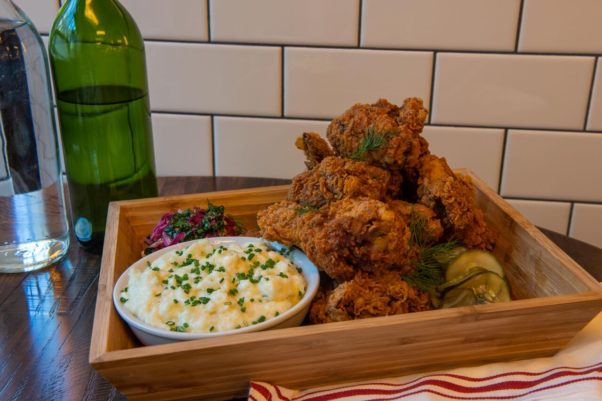 The Smith on U Street NW is now serving weekday lunch beginning at 11:30 a.m. The menu includes items only available at that location including crispy fried chicken. (Photo: The Smith)

The new menu includes a special brunch section, giving diners the option to have brunch every day of the week. With favorites on the menu including avocado toast, eggs benedict and crab cake tots, the new lunch menu also includes dishes only offered at the U Street location including the U Street Burger with bacon tomato jam, sharp cheddar, crispy onions, pickles, TSB sauce on a brioche bun served with fries and the shareable spicy fried chicken served with jalapeno cheddar grits, slaw and pickles. 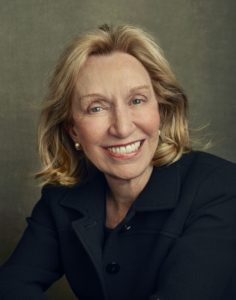 Author Doris Kearns Goodwin will talk about her new book, Leadership: In Turbulent Times, at a noon luncheon on Friday at the Hay-Adams hotel.
(Publicity Photo)

Kearn’s book is due to be released Sept. 18. Carla Hayden, the 14th Librarian of Congress, who is the first woman and the first African American to lead the national library, will introduce Goodwin.

Her seventh book is the culmination of Goodwin’s five-decade career of studying the American presidents. The book delivers an illuminating exploration into the early development, growth and exercise of leadership as exemplified by Abraham Lincoln, Theodore Roosevelt, Franklin D. Roosevelt and Lyndon B. Johnson.

Tickets are $90 per person and includes a three-course, prix-fixe menu with wine pairings. The menu will be themed around the book

Kramerbooks will be on hand selling copies of the book in advance of its release date, which Goodwin can sign and personalize after the luncheon.

Siren, 1515 Rhode Island Ave. NW, will partner with the Brazilian Embassy from Aug. 31-Sept. 9 to host Brazilian chef Felipe Schaedler of Banzeiro restaurant in Manus, Brazil, to prepare a five-course, prix-fixe menu for $70 showcasing vibrant flavors and ingredients from the Amazon. 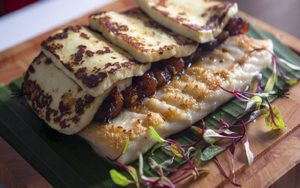 Schaelder, who is renowned for passionately searching the region for its most genuine Amazonian ingredients, has received numerous awards including chef of the year from Veja Manaus Comer e Beber magazine and was awarded the Order of Cultural Merit (knight class), the highest recognition given by the Brazilian government to people who help develop Brazil’s cultural identity.

The meal begins with an amuse-bouche including the delicacy of saúva ants with espuma. The first course will feature the traditional dadinhos de tapioca (little tapioca dice) with cupuaçu jelly from the fruit of the tropical rainforest tree. The second is crispy tambuchi ribs, a native Amazon fish, topped with a sweet and sour sauce and sesame seeds, followed by the main course of pirarucu with tucupi sauce, hearts of palm and red quinoa perfumed with coriander. Dessert is a chilled tapioca cake with white chocolate ganache and puxuri seed syrup.

A percentage of the proceeds will be donated to the local American Experience Foundation and Brazil-based charity, The VegaLume Foundation.