Get Into the Spirit with These Holiday Events

Christmas and Chanukah, which begins Dec. 25, are just about a week away. To get you in the holiday spirit, we have put together a list of some holiday light displays and events in the DMV. Most are free, although not all. 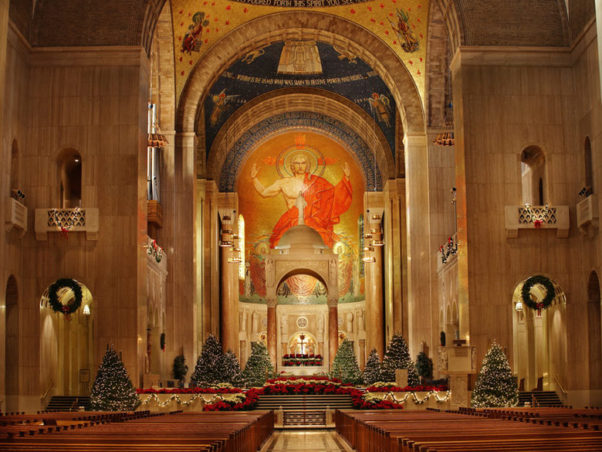 The Basilica Shrine of the Immaculate Conception

No visit to the Brookland neighborhood during the holidays is complete without a stop at the Basilica of the National Shrine of the Immaculate Conception. Mother Teresa, Pope Francis, Pope John Paul II and other religious figures have visited the Basilica. The largest Roman Catholic church in North America and the 10th largest in the world dresses up with more than 50 Christmas trees, over 65,000 lights, halls decked with 500-plus poinsettias and two manger scenes.

CityCenterDC, the upscale mixed-use development downtown with toney retailers like Burberry, Gucci, Hermes, Louis Vuitton and Ferragamo, and pricey restaurants like DBGB Kitchen and Bar and Del Frisco’s Double Eagle Steak House, is a winter wonderland with snowflakes and white lights hanging above the Palmer Alley pedestrian walkway. A dazzling 75-foot Christmas tree and two resident 25-foot reindeer on the Park at CityCenter facing New York Avenue. From Dec. 16-18, Hashtag Mailboxes – touchscreen mailboxes that create real, mailable physical postcards of your social media photos will be available from noon-6 p.m. Friday and 1-7 p.m. Saturday and Sunday. Type in a message to family or friends and either print out a post card you can mail or the mailbox will print a postcard and mail it for you, including postage.

The Downtown Holiday Market is centrally located at Eighth and F Streets NW, in front of the Smithsonian American Art Museum and National Portrait Gallery. Scope out eclectic wares from dozens of pop-up tents with seasonal music performed live in the background. The holiday bazaar features more than 150 exhibitors throughout its run. You will find everything from funky t-shirts and area photography to handmade jewelry and soaps. At night, its bright lights bring Penn Quarter to life, providing a holiday spark to the neighborhood. Locally roasted coffee and crafted-before-your eyes mini-doughnuts inspire a cold-weather appetite, creating a holiday atmosphere you won’t find anywhere else in the DMV.

Through Dec. 23 from noon-8 p.m. daily at Eighth and F Streets NW outside the National Portrait Gallery and the Smithsonian American Art Museum. Admission is FREE!

The Church of Jesus Christ of Latter-day Saints includes a display of international Christmas trees and creches from around the world, and a life-size outdoor Nativity scene along with more than 650,000 lights. (Photo: LDS Washington Temple)

Returning for its 39th year, the Festival of Lights celebration at the Church of Jesus Christ of Latter-Day Saints visitor center along I-495 includes a display of international Christmas trees and creches from around the world, and a life-size outdoor Nativity scene. A different performing artist or group is featured in concert twice each night, including bell ensembles, choirs, orchestras and more. Visitors can wander the temple grounds while trying to figure out how to take good pictures of more than 650,000 lights with an iPhone. 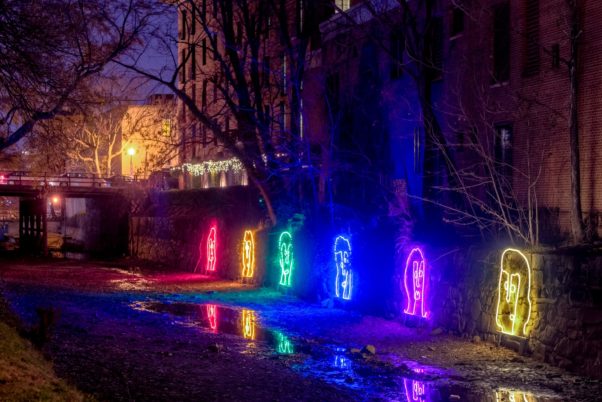 This stroll through D.C.’s most historic neighborhood will make you light up as you pass by unique, outdoor public light art installations. Georgetown Glow has proven to be such a hit that it is now a month-long celebration. A group of artists, from locally renowned to internationally celebrated, will display works in outdoor spaces throughout Georgetown. This year’s display, which features eight exhibits, up from five last year, encourages contemplation of, and interaction with, the natural environment. Each work has an element of interactivity allowing the viewer to walk in, on and around the piece, while others ask the viewer to become part of the artwork. Afterwards, wander through a winter wonderland at The Washington Harbour, one of our favorite places to ice skate in the District.

Through Jan. 1 from 6-10 p.m. nightly in along the waterfront, around the C&O Canal and up Wisconsin Avenue in Georgetown. Admission is FREE! 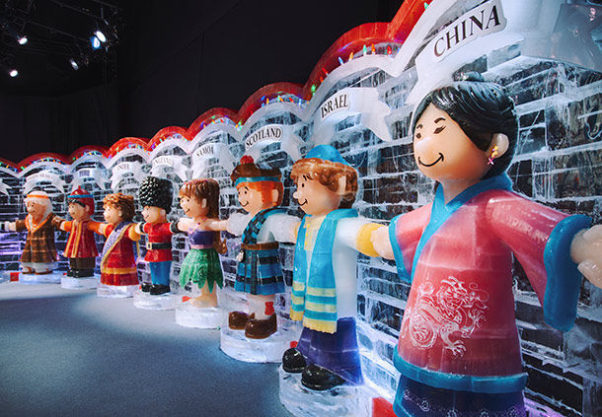 Explore the world this winter during the annual Ice! installation at National Harbor. Two million tons of ice were used to carve the ice sculpture for the “Christmas Around the World” theme, which takes visitors through icy illuminated interpretations of holiday traditions in Germany, Mexico, Britain and other countries. There are also five ice slides for adults and children as well as a parade of toys ice carving demonstrations. 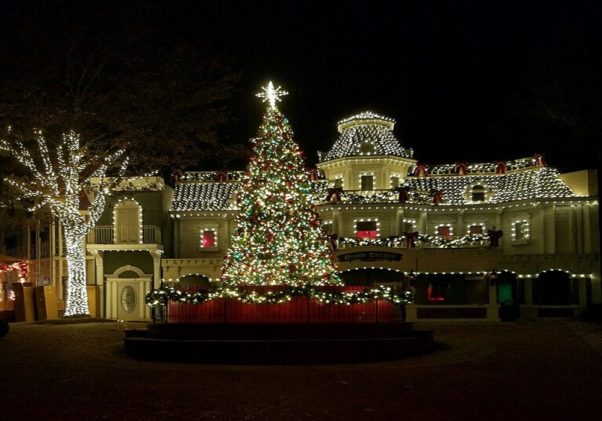 Holiday in the Park

Millions of twinkling lights, seasonal food, seven shows and 26 holiday-themed rides and characters make up Holiday in the Park, a new Christmas event at Six Flags America. Running during weekends and select days this winter, make the drive to enjoy the thrills of Six Flags accompanied by plenty of holiday cheer. Kids will love the interactive experiences, stunning decorations and Christmas singalongs. 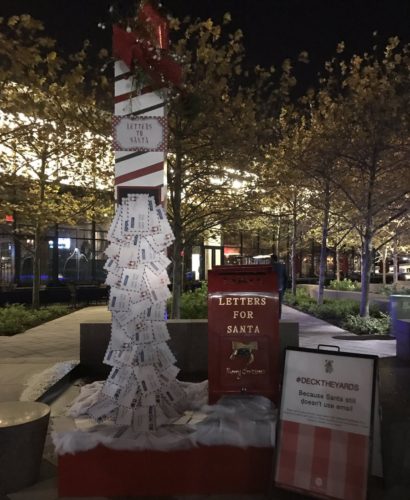 A tower built with letters to Santa is one of eight displays featuring mistletoe at Yards Park this holiday season. (Photo: Spicy Candy)

Mistletoe at the Yards

For a dash of holiday romance and perhaps an Instagram-able moment, head to Mistletoe at the Yards. The Southeast waterfront area will feature eight giant mistletoe sculptures spread throughout the park and neighborhood. The larger than life custom designs include a java inspired mistletoe archway, a tower built from letters to Santa, an ice cream sundae sculpture complete with a cherry on top, a human-sized holiday themed dog house, wine corks and more, all featuring mistletoe. And there’s a map if you want to plan the perfect mistletoe walk. Enter to win gift cards to neighborhood restaurants by posting to social media using the hashtag #DeckTheYards. 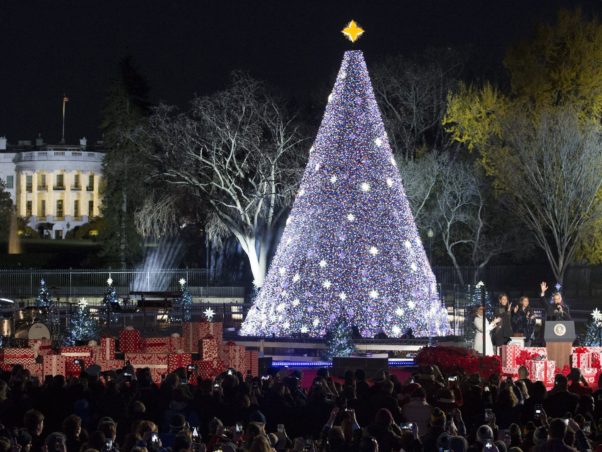 The National Christmas Tree was lit on in early December for the last time by President Barack Obama. The lighting ceremony kicked off one of the city’s time-honored traditions with a star-studded performance. Visiting the live tree, which is draped in red, white and blue lights and sprinkled with stars and sugar plum ornaments, is free throughout the season, and musical performances are held there nightly. The Pathway of Peace surrounding the tree features 57 state and territory trees decorated with handmade ornaments that are unique to each tree. 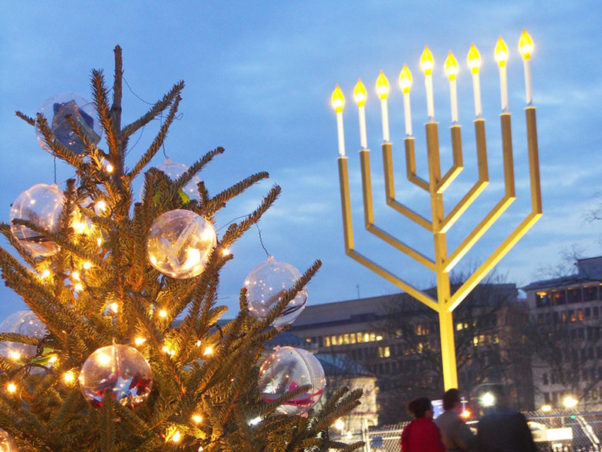 The National Menorah will be lit at 4 p.m. on Dec. 25 and a new candle added each night for eight days. (Photo: washington.org)

Chanukah kicks off with this lighting ceremony of the National Menorah — the world’s largest menorah — on the White House Ellipse, which greets all with latkes and doughnuts and menorah kits and dreidels. Music from the National Menorah Orchestra and The Three Cantors will add a soundtrack to the scene. As is the custom, a new candle is illuminated on each of the eight days of Chanukah. 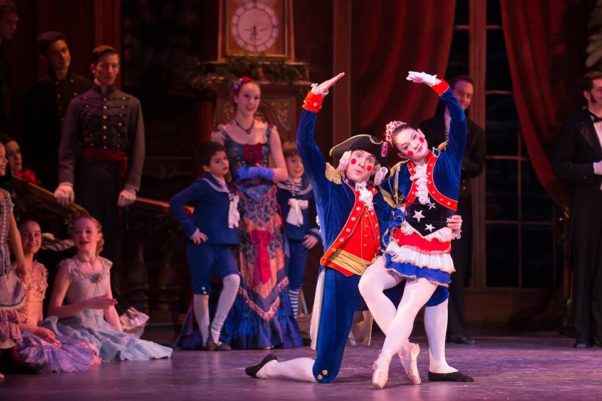 The Washington Ballet pulls out all the stops for this classic Christmas tale of The Nutcrakcer that features a D.C. twist. The Russian ballet goes local thanks to a Nutcracker Prince in the likeness of George Washington and cherry blossom set designs. Set in historical Georgetown, you will be dazzled by an impressive roster of dancers and the beautiful Tchaikovsky score. 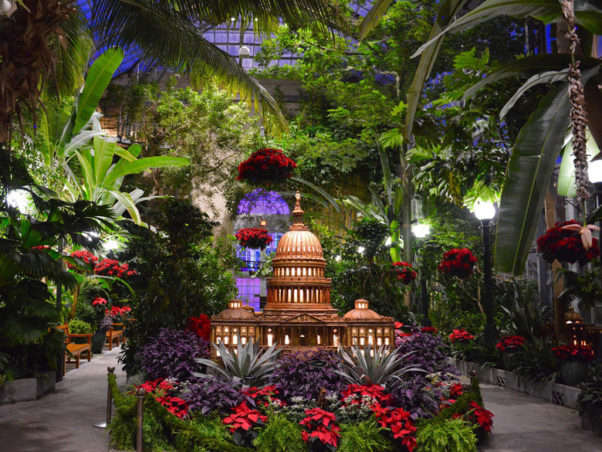 The annual Seasons Greenings holiday show at the United States Botanic Garden includes a collection of area landmarks made entirely from plant materials, including the U.S. Capitol Building, the Washington Monument and more. New for 2016: Inspired by the 100th anniversary of the National Park Service, a model train will tour a landscape of iconic American places (Old Faithful, the Grand Canyon, the Gateway Arch, the Statue of Liberty, etc.) also crafted from plants. Seasons Greenings will also showcase a large indoor tree sporting ornaments from national parks. There are thousands of blooms on display from exotic orchids to a showcase of heirloom and newly developed poinsettia varieties. On select Tuesday and Thursday evenings in December, the Conservatory will stay open until 8 p.m. to host live seasonal music. 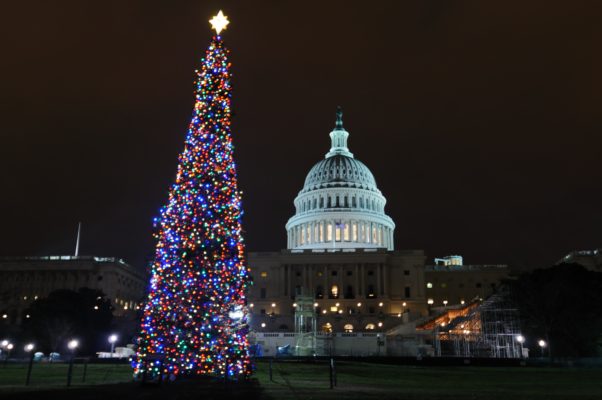 This year’s U.S. Capitol Christmas Tree, or “The People’s Tree,” is an 80-foot Engelmann spruce from the Payette National Forest in Idaho. Speaker of the House John W. McCormack (D-Mass.) was the first to place a live Christmas tree, which lived three years, on the Capitol lawn in 1964. Since 1970, the U.S. Forest Service has provided a tree from a different U.S. forest. More than 6,000 handmade ornaments representing the state symbols of Idaho including Appaloosa horses, Cutthroat Trout, garnets, huckleberries, Monarch Butterflies and Mountain Bluebirds with a “re-use and recycle” theme made by Idaho children decorate the tree.

Through Dec. 28 (it has to come down a bit early this year to make way for inaugural preparations) from dusk until 11 p.m. on the West Lawn of the U.S. Capitol, Constitution and Independence Avenues NW. Admission is FREE! 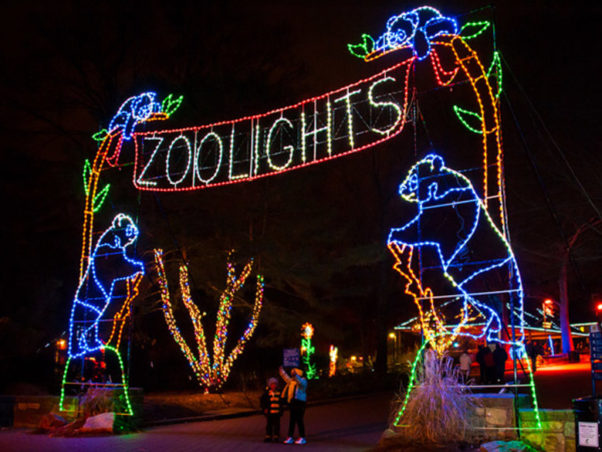 ZooLights decks the National Zoo out in more than 500,000 environmentally friendly LED lights that transform the zoo into a winter wonderland complete with a dazzling light show set to music. Take a break and thaw your paws in the animal exhibit buildings and see the nocturnal critters in the Small Mammal House, Reptile Discovery Center and Think Tank. The Zoo Choo-Choo takes visitors on a merry tour through the zoo on a trackless train around the Great Cats exhibit and features views of the light displays. There is also snow-less tubing on 150-foot long tracks and the solar-powered carousel will be giving rides. Ride tickets are $3 each at the zoo or $20 for eight tickets.