When the outdoor Dacha Beer Garden reopened for the season last March with chef Quinten Frye in the kitchen, some may have wondered what a James Beard Award-nominee was doing slinging brats, fried pickles and giant pretzels – not exactly prize-winning fare. 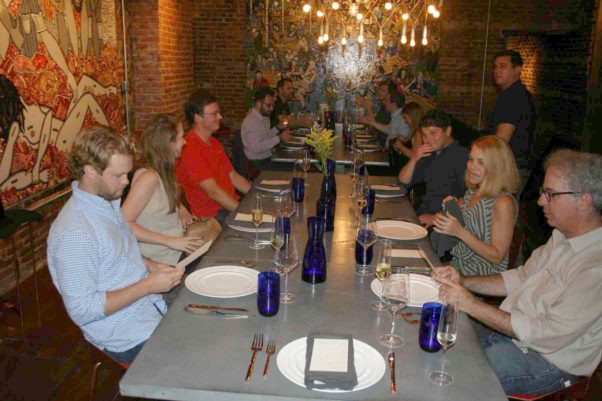 But now Dacha owners Dmitri Chekaldin and Ilya Alter are putting Frye’s talents to the test with their just-launched Thursday night Dacha Supper Club in a loft that was previously office space above Dacha Market, 1602 Seventh St. NW.

While the beer garden is the moneymaker, the supper club, which launched Sept. 15, allows Frye to “play around with food again up here.” The five-course meal costs $150 per person including tax, tip and drink pairings.

Frye, who is originally from Austin, Texas, and graduated from Texas Culinary Academy, was formerly executive chef at Bloomingdale’s Big Bear Café and most recently ran his own Torta Cocina, a gourmet Mexican sandwich delivery service and Monday night pop-up at Songbyrd Café in Adams Morgan. After leaving Big Bear, he briefly tinkered with his own $125 per head R&D Supper Club, which he hosted at DGS Delicatessen, but that only lasted a few meals.

Before Big Bear, he worked at José Andrés’ Oyamel. Prior to Oyamel, Frye co-owned Salt Kitchen and Tasting Bar — where he was named the 2012 Hawaii Rising Star Sustainability Chef by Star Chef magazine and was nominated for the James Beard Rising Star Award in 2013 — and Cocina Modern Mexican Kitchen in Hawaii, both in Honolulu and both now closed.

To get to the supper club, diners enter through an unmarked black door to the right of Dacha Market and go up the stairs behind the kitchen. The space is industrial with exposed brick walls, distressed wood floors and exposed ceilings. The furnishings are minimal: one stuffed chair, some low cabinets stacked with plates and glasses and huge artwork hung on the walls from Swedish-born local artist Anna U. Davis that has an almost tortured feel to it featuring her abstract “Frocasians” abstract African American-Caucasian figures. The artwork, which is from local artists, will rotate except one on the back wall that depicts celebrities and other famous people at the beer garden. In the center of the room are two eight-person tables set with white plates, blue glassware and vases and gold-plated flatware.

The menu will change frequently, although the first two dinners along with the upcoming one this Thursday have the same menu — appetizers of grilled shishito peppers with bottarga butter and yuzu kosho, and oyster beignets with skinny dipper oysters served with Green Goddess aioli. The first course is burrata with charred tomato jam, basil pistou and country bread followed by the second course of rabbit cavatelli with rabbit confit, carrot butter and Cipollini onions. The main course is lamb saddle with Calabrian chile, peperonata and roasted garlic with sides of creamed beet greens, green and yellow ramono beans with green sofrito and ricotta salata, and smashed red thumb potatoes with tarragon butter. Dessert is a pear crostata with black pepper, maple, walnuts and cream cheese gelato.

Dacha’s “wine concierge” Miriam “Raz” Razavi, has chosen wines to go with each course and talks about the wine and why she chose them between courses.

The meals are served family style at the communal tables. At my table last week was a political writer from The Washington Post, a publicist and three college classmates with a start-up car maintenance company that will pick up your vehicle when you aren’t using it, like when you are at work or overnight, have the work done and return it before you need it again.

The next supper club is set for 7 p.m. Thursday, Oct 6. Seating is limited to 16. Frye said he hopes to eventually expand the meal to bi-weekly. Tickets must be purchased http://www.dachasupperclub.com/#buy-a-ticket-1-section online. The Docha Loft can also be rented for private events.