Since it opened in October 2013, Copperwood Tavern, 4021 Campbell Ave., Arlington in Shirlington Village, has had several chefs and several menus all without any cohesion.

Copperwood Tavern in Shirlington has had at least four chefs in three years.
(Photo: Mark Heckathorn/DC on Heels)

Chef Allan Javery launched the cabin-style restaurant from Wooden Nickle Bar Co., which also owns Orange Anchor in Georgetown, Irish Whiskey in Dupont, Union Social in NoMa and the forthcoming Dudley’s Sport & Ale in Shirlington. Javery originally had a menu with small plates and proteins served a la carte that included game like bison meatballs, wild boar pasta and a coffee-rubbed venison chop. His menu was designed to match the restaurant’s interior, which is reminiscent of a mountain retreat covered in wood salvaged from an abandoned barn in Virginia.

But as the company grew, Javery, who is now the executive chef at The Heights in Columbia Heights, was promoted to corporate chef, planning the menus at the now-closed Second State, then Orange Anchor and Union Social. In April 2015, Justus Frank, formerly of Fiola, Alphonse Italian Market and Osteria and Nonna’s Kitchen, was brought in as executive chef to concentrate just on Copperwood. His menu had more of as Southern bent with dishes like fried green tomatoes, which also showed up on sandwiches, along with baby kale salads, quinoa stuffed peppers and sautéed greens.

Fried green tomatoes were cut too thick and hard, not crispy. (Photo: Mark Heckathorn/DC on Heels)

Now, after less than a year, Frank has left to open his own restaurant Live Oak, which will serve Southern classics in the Del Rey section of Alexandria. Owner Reese Gardner has hired James Duke, most recently executive chef at Provision No. 14 for less than a year and Driftwood Inn briefly before that, as the next executive chef.

During a visit late last month, lunch was a bit disappointing. I’ll chalk it up to Duke still serving Frank’s menu. It will be interesting to see what kind of spin Duke, who was had a more communal, family-style menu at Provision No. 14 with dishes like chili braised short ribs or pata (braised suckling pig leg that is hung to dry overnight then deep-fried). His other dishes included veal sweetbreads and charred octopus. 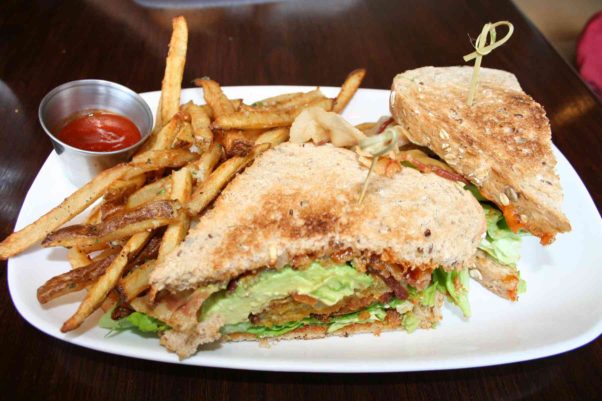 On our visit, the fried green tomato appetizer was sliced too thick ad not cooked long enough, resulting in hard not crispy tomato slices. The BALT (bacon, avocado, lettuce and fried green tomato) with smoked tomato-chipotle aioli was dry, probably because of the whole grain bread that tasted more store-bought than fresh baked. Also, the smoky aioli flavor overpowered the ingredients. The bacon and avocado should have been the stars of the sandwich. The ketchup served with the fries tasted like artificial smoke flavoring had been added and overpowered the fries. When I asked for some regular ketchup, I was given another cup of the aioli. Finally, on the second attempt, I was given a bottle of Heinz.

The Copperwood burger my friend ordered was served with bleu cheese, friend green tomato and bacon jam. Although he said it was good, it wasn’t something that would bring him out from D.C. again, especially when Shirlington is only accessible by car or bus. The highlight of our meal was the free popcorn that is brought to every table in a small metal pail. Seasoned with what tasted like Old Bay, it was quite addicting. 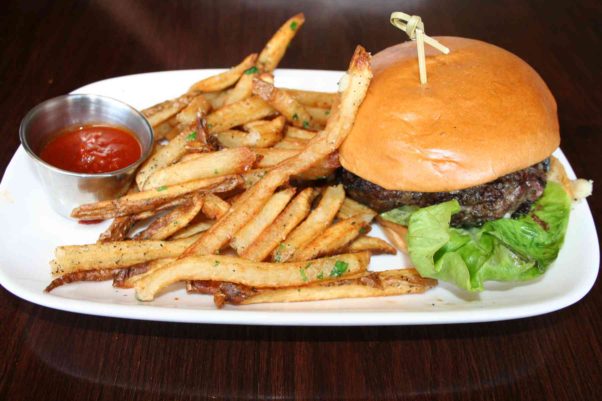 The Copperwood burger was the best dish of lunch. (Photo: Mark Heckathorn/DC on Heels)

In the restaurant’s defense, I will say that I’ve tried some of the dishes that are also on the menu at other Wooden Nickel restaurants. The lobster and shrimp salad roll at Orange Anchor was delicious as were the venison strip steak and smoked gouda mashed potatoes at Second State.

The prices are also a bit steep for lunch, with the four slices of fried green tomatoes, two sandwiches with fries and two sodas costing over $43.

Hopefully Duke will stick around for a while and bring some consistency to the food once he introduces his own menu. Especially since Copperwood Tavern is opening another location next month. The new 5,600-square foot location at 20473 Exchange St. in Ashburn’s One Loudon development is supposed to have an identical menu with a few local touches. It will seat about 176 inside and 50 outside on the patio.