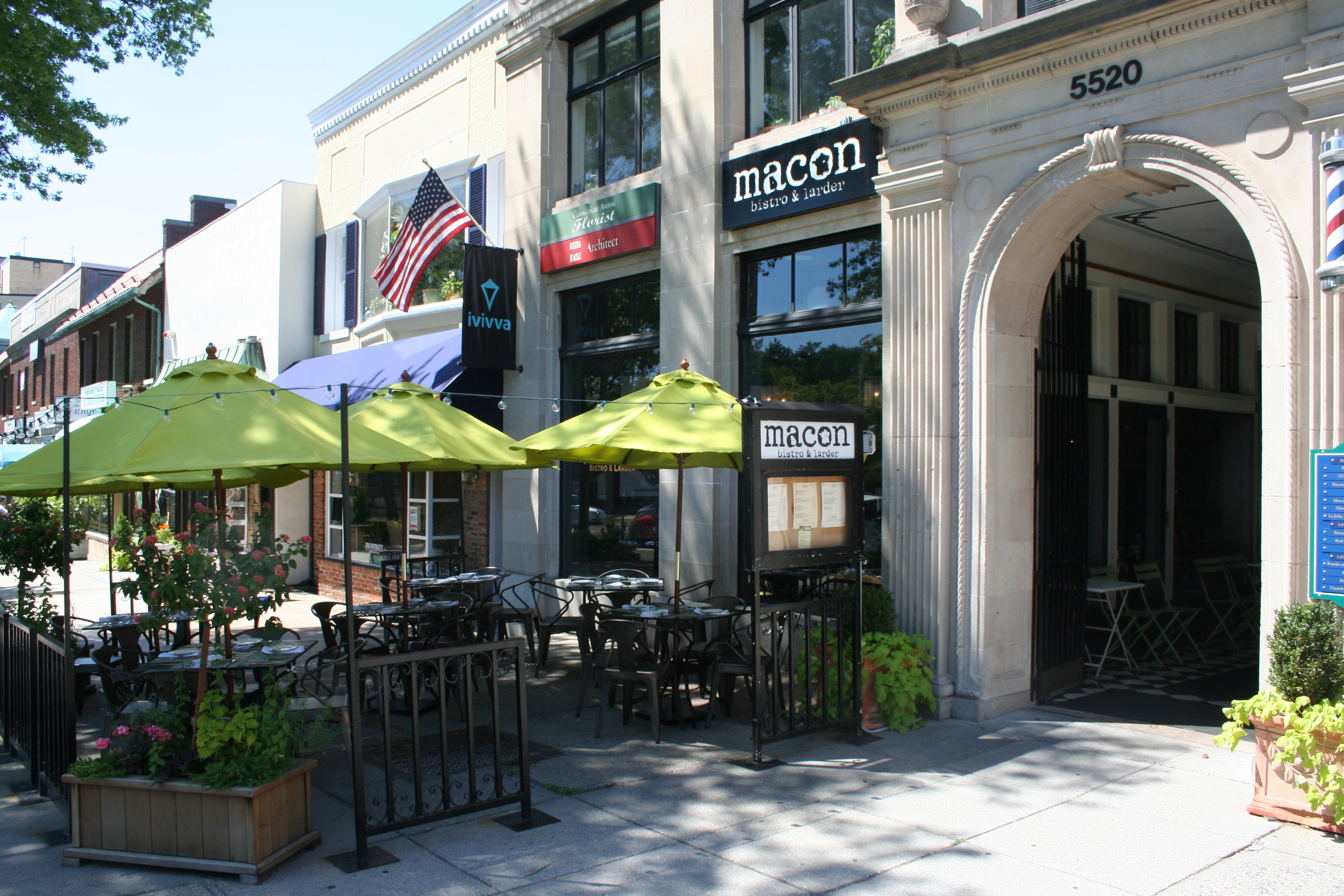 Executive chef Daniel Singhofen and chef de cuisine Jenna Pool, who both worked together at his former Eola restaurant, are serving Southern classics with a French twist. The menu changes often. In fact, in the month since Macon has been serving lunch, some of the items have changed at least once.

The restaurant, located in the Chevy Chase Arcade building, is small, seating 50 inside, 20 at the bar, which overlooks the open kitchen, 25 in the Arcade hallway and another 25-32 on the seasonal patio. The inside is decorated in shades of gray with chartreuse and olive green accents. Olive velvet curtains hang on the windows and silver and green flowered wallpaper adorns the front and back walls Water is served in the bottoms of clear glass bottle, drinks in Mason jars and food on mismatched plates bought online from estate sales. 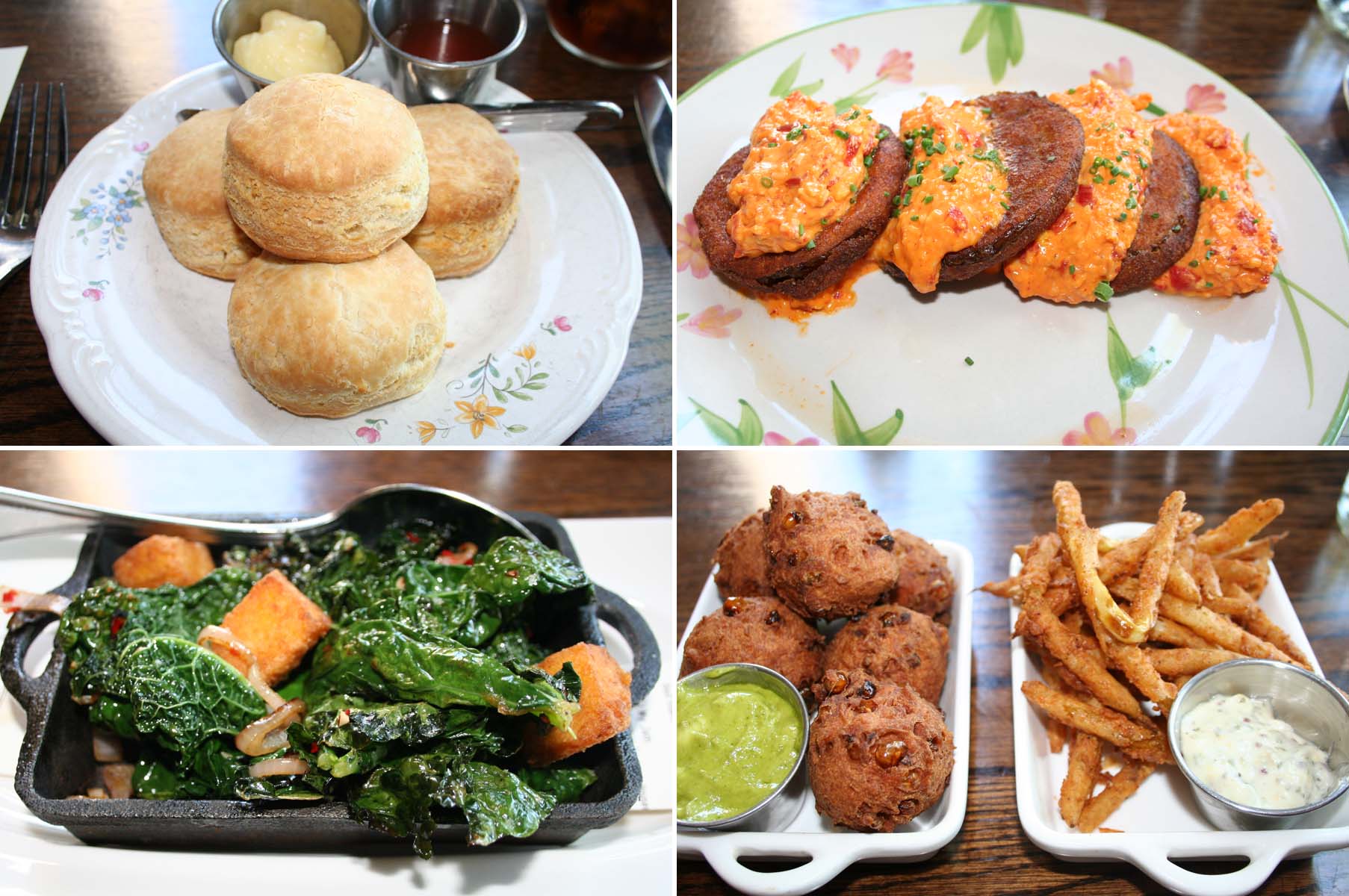 We visited last Friday to try out their new lunch offerings. Our meal began with an order of Essie’s biscuits served with honey butter and pepper jelly. The biscuits were flaky and made with a hint of cayenne pepper. The house-made honey butter added sweetness and the pepper jelly a bit of vinegar tang.

We followed with a few selections from the snack menu, which was listed on two chalkboards hanging on either end of the bar, and starters listed on the menu. On Friday, the snacks included corn fritters and fried pickles made with breaded and fried wax beans ($6 each). We also tried the fried green tomatoes with pimento cheese ($13). The corn fritters with whole kernels of corn and basil dipping sauce were the best. The fried pickles were also tasty, but better when NOT dipped in the accompanying tartar sauce, which belongs on fish or scallops and not on pickled vegetables. The tartar sauce was overpowering and overtook the taste of the pickles. The fried green tomatoes were cut a bit thick for my liking, so they were chewy and not crisp, but the pimento cheese was excellent. 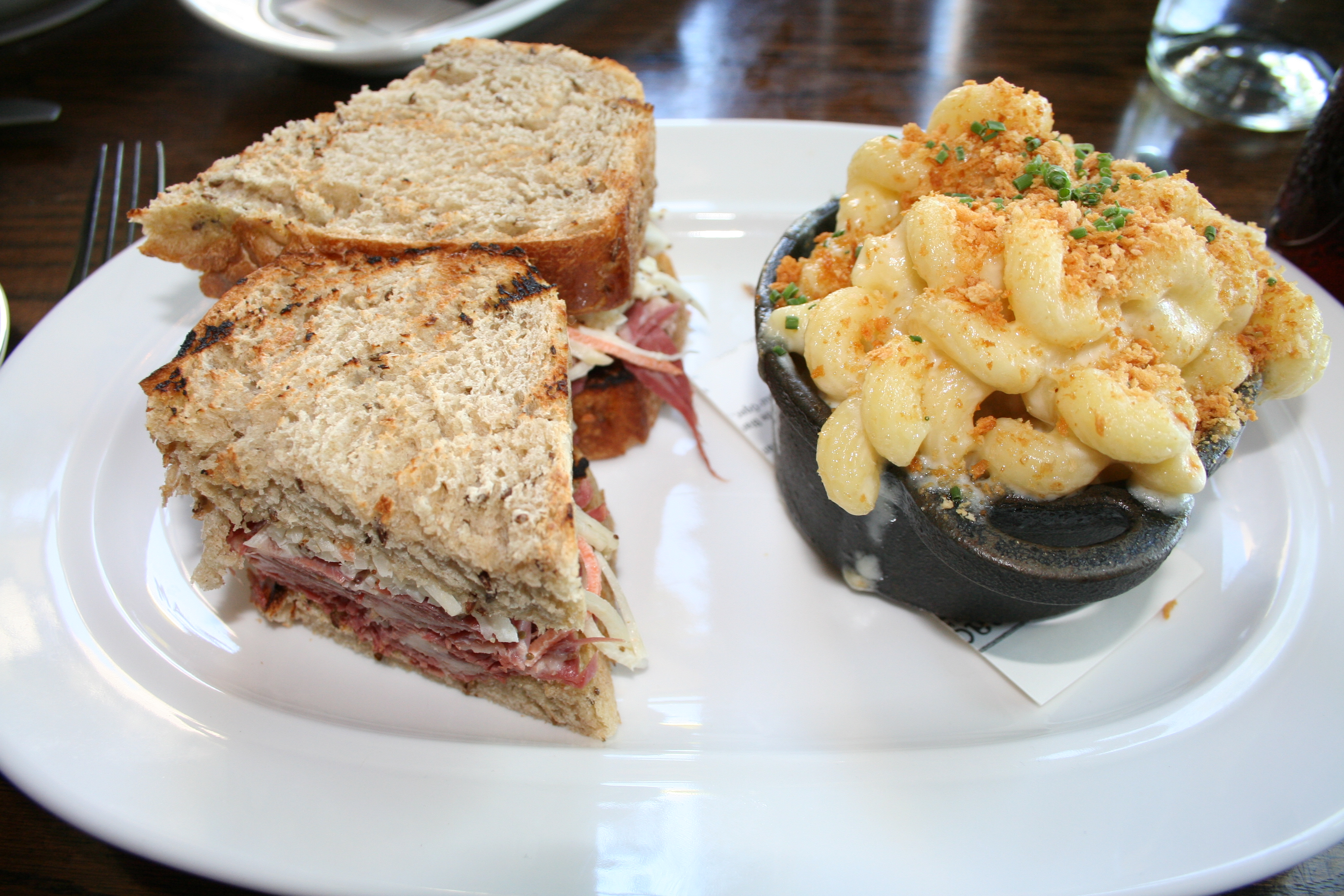 The bread on the corned beef sandwich was too thick, but the mac on cheese was perfect. (Photo: Mark Heckathorn/DC on Heels)

For our main courses, I chose the corned beef on house-made caraway rye bread and kohlrabi ($15) and my guest chose the market fish, which that day was monk fish (market price) with a bean and mushroom mixture. Mains come with a side salad or a side can be substituted for an additional $2. I chose the ‘mac’ on cheese made with cheddar mornay and panko, while my friend ordered the spicy kale with crispy grits, shallots, garlic and chilies.

The house-made corned beef was perfect, but the bread was way too thick. That seems to be a problem with all of the sandwiches, since I heard the diner at the next table complain to the server that the bread on his ham sandwich was also too thick. Our server said the bread is hand sliced, which accounts for the thick slices. I removed one slice of bread and ate my sandwich open faced. Also, while the bread was toasted, the corned beef was cold and the kohlrabi was dry and would have been better if it had been coleslaw with a mayonnaise-based dressing. The mac on cheese, on the other hand, was excellent and probably the best dish I tried all day. I could have eaten a whole plate of the mac on cheese as a main dish. The monk fish was also very good, and the better of our two entrees. It was mild and came swimming in a tasty broth that my guest ate as a soup. He also enjoyed the crispy kale. 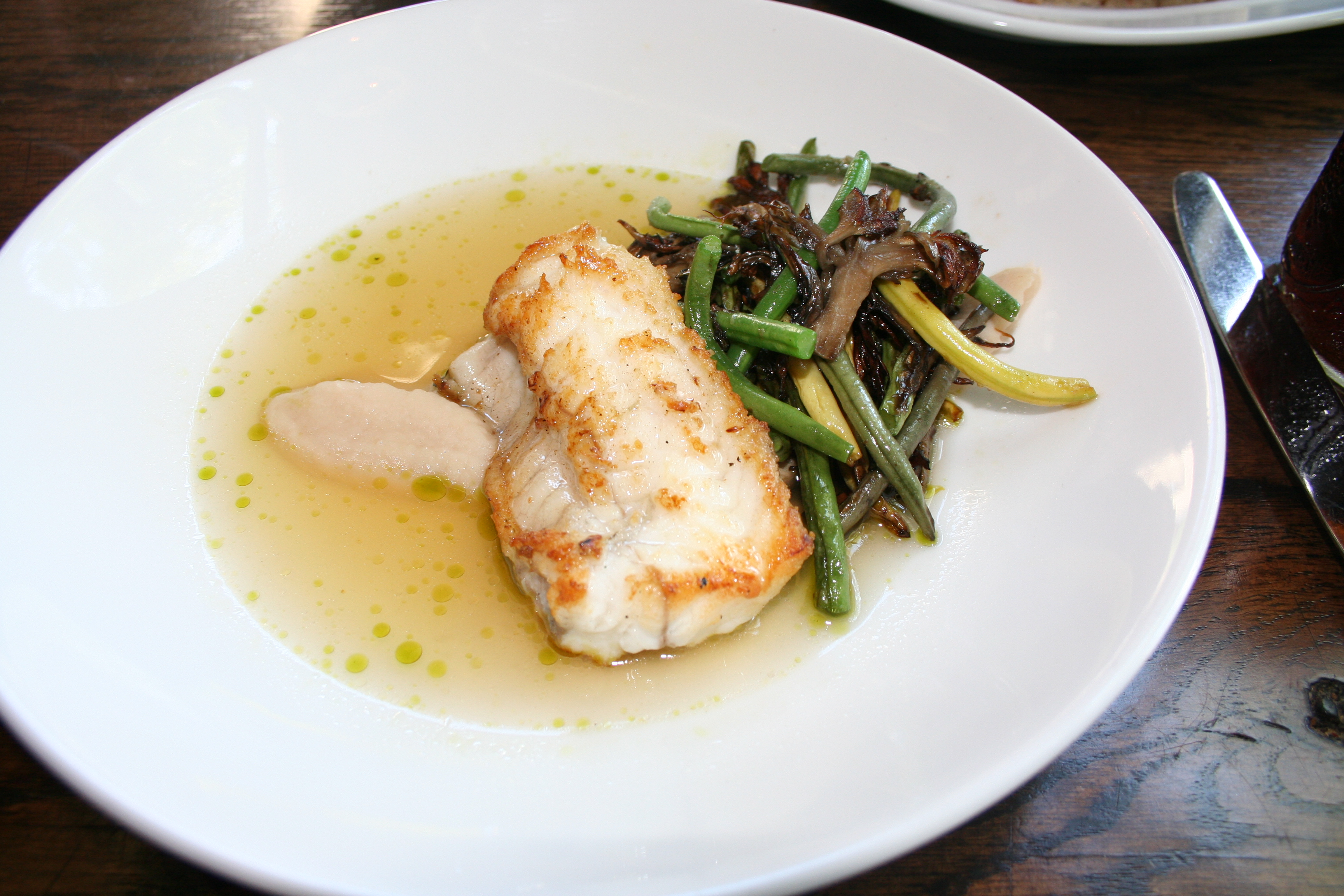 The market fish of the day was monk fish served with beans and mushrooms. (Photo: Mark Heckathorn/DC on Heels)

Other entrees include a city ham sandwich with cheddar, honey mustard and country bread; a cheeseburger on a house-made bun with aged cheddar and fingerling potatoes; chicken salad with lettuce and grapes served on a baguette; and the Bistro Filet with blistered green tomato condiment, summer savory, bush bean-wheat berry salad and olives. Other sides include collard greens simmered in white wine and topped with bacon and garlic; Hoppin’ John with sea island red peas, smoked pork and Carolina gold rice; vegetables a la grecque made with summer vegetables, extra virgin olive oil, herbs and saba.

Lunch dessert choices are limited. During our visit, we were offered only chocolate truffle cheesecake with mint syrup and fresh thyme or almond custard with cherry compote and almond crunch. My guest wen with the almond custard which was the perfect mix between sweet and tart with pastry chef Jameela Hassan’s sweet almond custard and the tart cherry compote. I went off the menu and ordered a peanut pie from the larder. I had never had peanut pie before, but it was very tasty. Sort of like a pecan pie only with peanuts instead of pecans with a little bit of peanut butter folded into the filling. 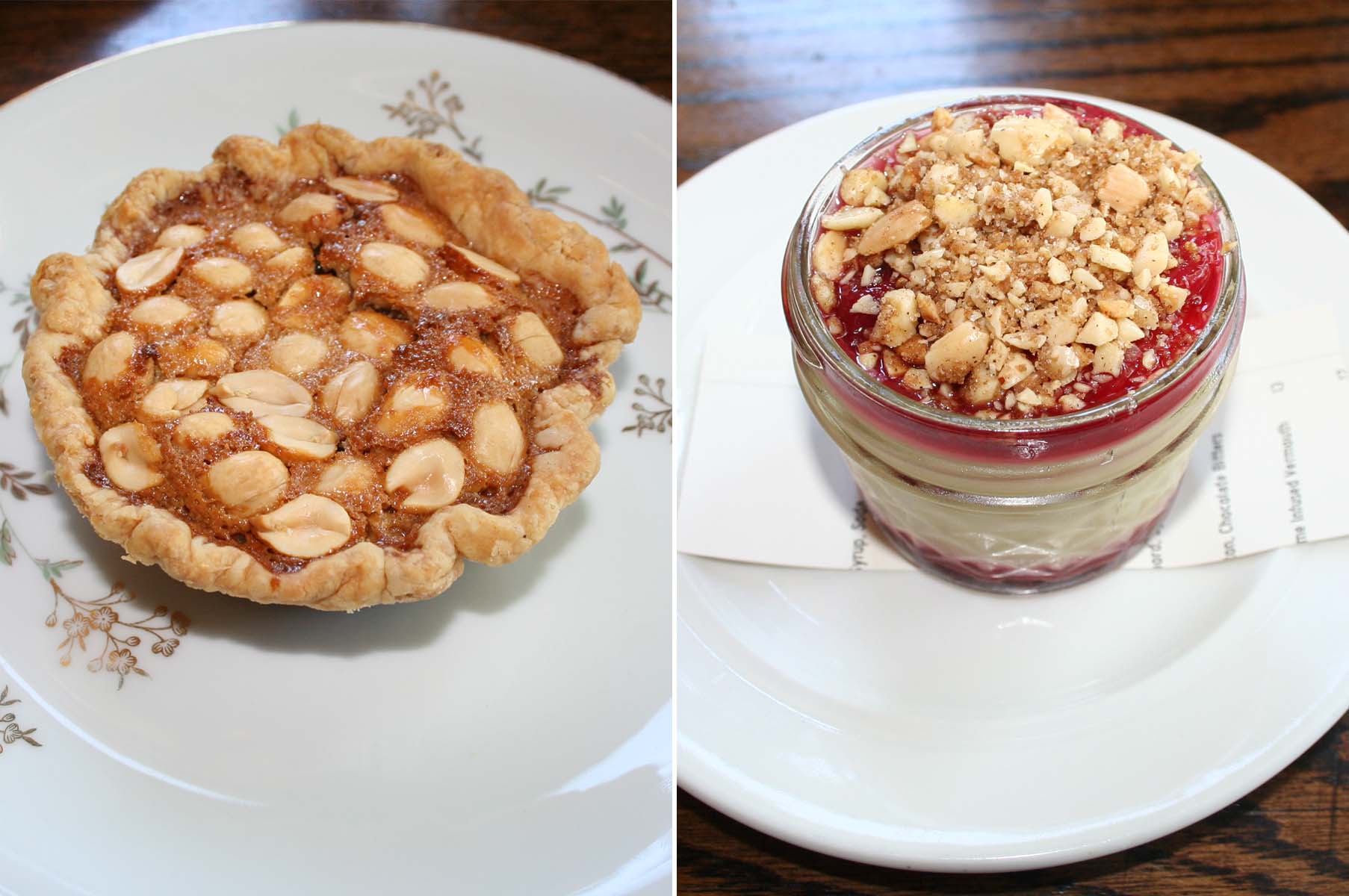 Only limited alcoholic drinks such as beer and wine are available since there bar doesn’t open until 4 p.m. Lunch ends with a house-made sea salt caramel, which are also for sale to take home at the larder.

Overall, it was a very tasty lunch, but prices are a bit steep and after less than a month, Singhofen and Pool still have some kinks to work out with their lunch menu and presentation. I’m not sure if Southern and French cuisines blend well, but if they take the recommendations of their guests (cut the bread and green tomatoes thinner), focus on the Southern component and simplify the garnishes, this could become a four-star lunch.