How to Limit Sodium While Eating Out

Whether at a restaurant or at a relative’s house, eating out during the holidays can be difficult on a diet, especially when it comes to sodium intake.

Sodium is an important nutrient for human health. The body uses it to control blood pressure and blood volume. Sodium also is needed for muscles and nerves to work properly. Many foods naturally contain sodium and many others have salt added to improve flavor, so it’s easy today to get too much. Too much sodium can lead to health problems like high blood pressure, which contributes to serious problems like heart disease and stroke. 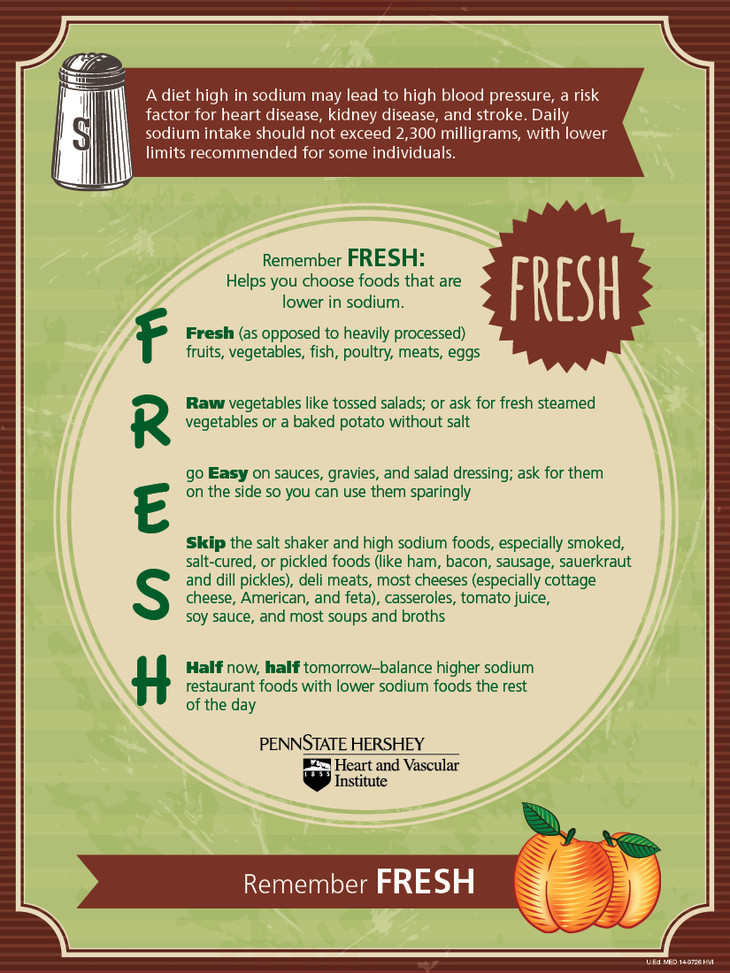 Jan Kristensen from the Cardiac Rehabilitation and Wellness Center at Penn State Milton S. Hershey Medical Center shares strategies for enjoying the festivities without the stress of too much sodium.

If going to a restaurant, visit its website and consult an online menu or nutritional information. Ask questions, such as whether meals are made to order, by calling ahead. Additional online resources can provide general information about many popular foods, but these aren’t necessarily specific to your host’s recipes.

“Going to a relative’s house might be a little trickier than eating out,” Kristensen said, but it can’t hurt to ask the host some questions.

If familiar with what the host typically serves, visit gomeals.com to download an app that provides nutritional information for favorite foods. Visit eatright.org to learn what foods are low in sodium.

Fresh meats also have a smaller amount of sodium than processed meats like sausage and bacon. If cooking, order a fresh turkey, not the one that is injected with salt solution as a preservative. Turkey is a better choice than ham.

The highest sources of sodium in an American diet are yeast breads, breaded chicken products and pizza. During the holidays, mashed potatoes and stuffing can often be culprits along with cheeses and crackers. When the salt can’t be controlled by cooking yourself, consider sweet potatoes, which are less likely to be salted, and swiss cheese with less sodium.

Be wary of desserts. Grain-based desserts like pies, pastries and cakes are the biggest sources of sodium.

Keep in mind when watching calories that diet, low-calorie, low-fat products often contain double the sodium of the regular variety.

Limit portions. Take a bite or take a small portion to satisfy seasonal dish cravings. Do things to slow down eating, like focusing on the conversation or putting down your fork or spoon between bites. To avoid temptation, don’t stand too close to the buffet and sit down to eat.

When visiting a restaurant, split an entrée. Use smaller plates at home or with family.

Prepare ahead of time

In addition to doing research, offer to bring something to help your host with preparation. Take herbs or salt-free seasoning to a restaurant and ask for foods that are very plainly prepared.

Log or track sodium to know what you’ve eaten and to make it easier to make decisions throughout the day. It helps you get away from mindless eating and is good for calorie counting as well.

Mentally plan ahead by deciding what the temptations are and what will be allowed to be eaten. Stick with a taste of those special foods that are eaten once a year to avoid that feeling of deprivation.

“Feel like you’re in control, not deprived,” Kristensen said.