Executive chef Frank Ruta and pastry chef Aggie Chin have mysteriously left Mirabelle, Hakan Ilhan’s (Alba Osteria and Ottaman Taverna) ultra-luxe French restaurant known for its $24 ham sandwich at 900 16th St. NW, in a major shakeup at the restaurant. The pair, who have worked together since Ruta’s now shuttered Palena then at the Grill Room at the Capella/Rosewood Hotel in Georgetown, served their last meal on Saturday. 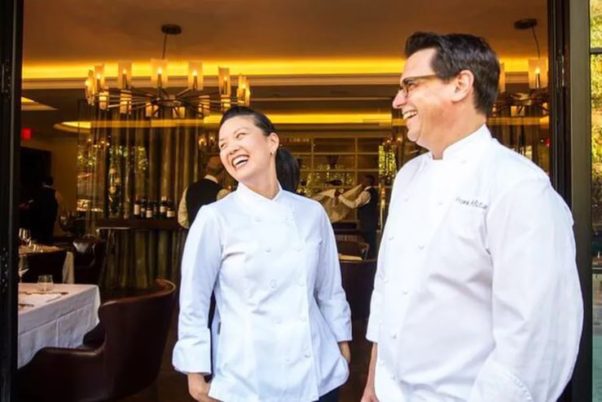 Pastry chef Aggie Chin (left) and executive chef Frank Ruta have been replaced at Mirabelle because of the “inability to consistently meet food and labor costs.” (Photo: Getty Images)

The restaurant closed after Saturday’s service and will reopen with a mix of fresh faces and returning talent on Aug. 7.

Ruta and Chin traveled to France and New York to visit one- and two-star Micheln Restaurants as they shaped the cuisine at Mirabelle, which opened in March 2017 to rave reviews. But lately, it has fallen in popularity, with complaints of poor service and quality on social media.

The shakeup was “purely a business decision,” Knowles told Washingtonian magazine. “There was an inability to consistently meet food and labor costs.” The often half-empty dining room didn’t help.

Earlier this year, Ilhan abandoned plans to open a tapas restaurant in Mount Vernon Triangle and he closed his other French restaurant, L’Hommage Bistro, last summer.

Bombaugh’s menu will include three ($75) to 12 course ($195) prix-fixe options in addition to a la carte choices that include French, Mid-Atlantic and New England influences. Dishes will include Maryland crab toast, a croque madame popover and a Cape Cod duo of clams with fried bellies and steamers. The dessert and Armagnac/spirits carts will stay as the new staff try to make the restaurant more approachable for a quick lunch or bar snacks in addition to elaborate dinners.

Founders Nicholas Jammet, Nathaniel Ru and Jonathan Neman are converting their original 500-square-foot Sweetgreen location at 3333 M Street NW in Georgetown into a market called The Tavern, which will open in late August and is named for the Little Tavern burger chain that previously occupied the space. 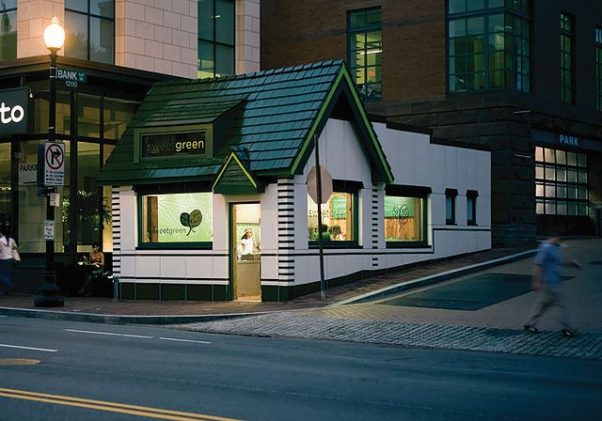 The building has been vacant since Sweetgreen’s new two-story flagship location opened at 1044 Wisconsin Ave. NW in September 2017.

The Tavern will sell many of the same products and produce used in Sweetgreen’s salads, like greens, cheese from Maryland’s FireFly Farms and Soom tahini. It will also feature smaller and younger farms that don’t have the capacity to supply all of Sweetgreen’s DMV locations and will offer a community-supported agriculture (CSA) subscription program.

The list of suppliers include Gordy’s Pickle Jar, Harper Macaw chocolates and Misfit Juicery. The owners are also planning to collaborate on new items also. Nick Wiseman, co-owner of Whaley’s and Little Sesame, will help curate the products and manage operations.

While the new store won’t sell salads, it will bring back the chain’s Sweetflow frozen yogurt, which has been missing in Georgetown since Pinkberry closed. 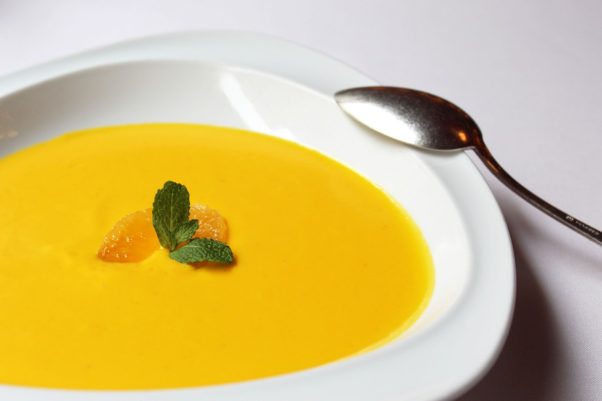 Beginning July 16, three members of the Knightsbridge Restaurant Group will embrace the arrival of summer and the return of the vine-ripened tomato with special dishes showcasing the vegetable. The three restaurants will roll out tomato-centric, three-course menus priced at $50 with choices of appetizers, entrées and desserts during lunch and dinner from July 16-Aug. 12. 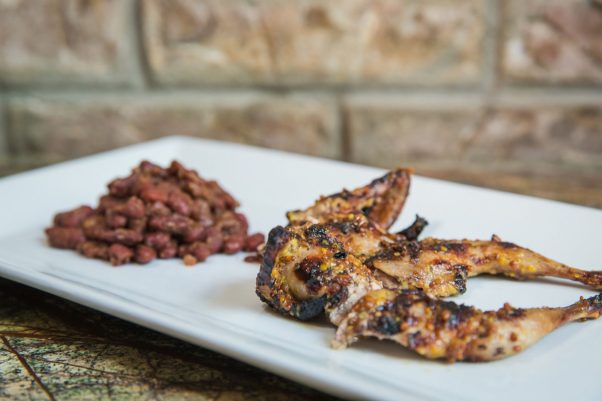 Appetizers include a choice of grilled asparagus and onions, smoked chicken eggroll with Carolina mustard sauce or the BBQ quail with semi-sweet mustard and mixed beans followed. Entrées include a grilled veggie Napoleon burger with eggplant, squash, zucchini, tomato and onion, served with a house salad or fries; grilled pork chop with hoisin soy chili sauce, onions and grilled vegetables; Texas-style smoked dry-aged brisket served open-faced on brioche toast with a choice of house salad or fries; or grilled hanger steak with chimichurri and fries. For dessert, diners can choose the featured ice cream or sorbet of the week for an additional $4.

Gina Chersevani’s of Buffalo & Bergen has a new Wandering Oasis cocktail truck that will be parked National Harbor’s waterfront on weekends this summer. It might make a few cameo pop-ups at Nationals Park too.

The truck serves both frozen and tapped cocktails. Icy drinks include daiquiris with flirty flavors, like hibiscus lemon made with Cruzan Light and 151 Rum or sour citrus margaritas mixed up with Sauza Tequila. There are also crushes, featuring citrus flavors like orange and grapefruit made with Pinnacle Liquo. The eight cocktails on tap include a mint tea infused with Jim Beam Bourbon and lemon.

Find Wandering Oasis at the National Harbor waterfront on Fridays from happy hour to midnight, and Saturdays and Sundays from 2 p.m.-midnight. Every drink on the menu is 16 ounces and costs about $9. 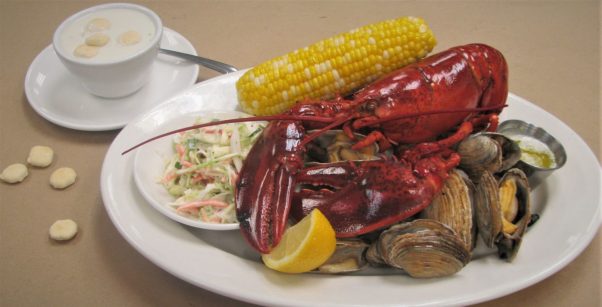 From July 16-Aug. 27, three of Legal Sea Foods’ DMV restaurants will be offering C-Food Mondays, which includes a cup of New England clam chowder, 1-1.25-pound lobster, steamers, corn on the cob and coleslaw for $29.95 per person. The special is only available for those dining in the restaurant and will not be available for takeout. 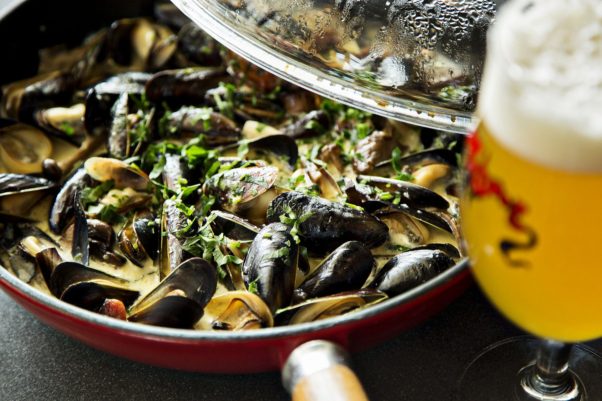 Brasserie Beck and Mussel Bar & Grille are offering all you can eat mussels for $28 from July 17-21. (Photo: Brasserie Beck)

To kick off Belgian Restaurant Week, Brasserie Beck will host a Sour Hour from 5-8 p.m. on Tuesday, July 17, with Duvel, Liefman’s and Ommegang. The Belgian brewer has partnered with the Chesapeake Bay Foundation for an evening of Belgian sours brewed both in Belgium and in the Chesapeake Bay Watershed. The patio party will feature selections including Liefman’s Goudenband, Ommegang Pale Sour, Ommegang Rosetta, Ommegang Nirvana IPA and Duvel Singel.

From 5-8 p.m. on Thursday, July 19, Brasserie Beck will celebrate the relaunch of Brasserie Dubission. The brewery has been churning out wine-influenced beers since 1769. The family-owned brewery will be serving fresh pours of Scaldis, Scaldis Peche Mel, Bush Tripel and Cuvee des Trolls. There will also be rare bottled-aged pours of Scaldis Prestige, Prestige de Nuits and Prestige de Charmes.

The week-long celebration will culminate on Belgian National Day, July 21, with Brasserie Beck hosting an oyster fest from 11 a.m.-3 p.m. with all-you can-eat oysters for $38 paired with a Belgian inspired Kasteel Rouge and Shallot Mignonette. Festivities will also include rolling beer specials every two hours throughout the day with half-off deals and swag, glassware and giveaways from the featured breweries.

Will Artley will “pop-up” at Bastille 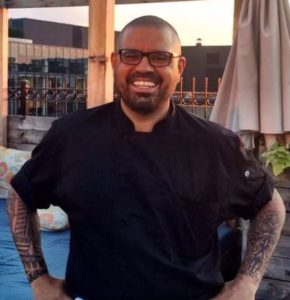 Will Artly will hold a pop-up at Bastille from July 19-29.
(Photo: Will Artley)

Chef Will Artley will “pop-up” at Bastille restaurant, 606 N. Fayette St., Alexandra, offering a $55 prix fixe five-course tasting menu from July 19-29 along with the regular menu.’

Artley most recently was executive chef at Kimpton’s Hotel Zamora in St. Pete Beach, Fla., where he oversaw the restaurants and room service. He previously worked at The Grist Mill, Nonna’s Kitchen, BLT Steak, Pizzeria Orso, Evening Star Café, Butterfield 9, Kinkead’s and Colvin Run Tavern in the DMV. He had staged at restaurants such as Aquavit in New York City and D’Amico Cucina in Minneapolis.