Hot Cars Can Turn Deadly in One Hour

A lot can happen at 160 degrees Fahrenheit: Eggs fry, salmonella bacteria dies and human skin will suffer third-degree burns. If a car is parked in the sun on a hot summer day, its dashboard can hit about 160 degrees in about an hour. One hour is also about how long it can take for a young child trapped in a car to suffer heat injury or even die from hyperthermia.

A new study found that in the sun, car interiors can reach deadly temperatures in about an hour. (Photo: Arizona State Unversity)

Seven children, including a 5-month-old girl and boy in Chesterfield, Va. on May 10, have died from being left in hot cars in the United States so far this year, according to the web site noheatstroke.org, a program supported by the National Safety Council. That number will rise with looming summer temperatures. On average, 37 children in the U.S. die each year due to complications of hyperthermia — when the body warms to above 104 degrees Fahrenheit and cannot cool down — after being trapped in overheated, parked cars.

Researchers from University of California San Diego School of Medicine and Arizona State University found that if a car is parked in the sun on a summer day, the interior temperature can reach 116 degrees, and the dashboard may exceed 165 degrees, in approximately one hour — the time it can take for a young child trapped in a car to suffer fatal injuries.

The study, published May 24 in Temperature, compared how different types of cars warm up on hot days when exposed to different amounts of shade and sunlight over different periods of time. More importantly, the researchers also took into account how these temperature differences would affect the body of a hypothetical two-year-old child left in a vehicle on a hot day.

“Young children are vulnerable to the impacts of extreme heat with increased emergency department visits found during heat waves. Internal injuries can begin at temperatures below 104 degrees,” said lead author Jennifer Vanos, an assistant professor in the Department of Family Medicine and Public Health at UC San Diego School of Medicine. “As compared to adults, children have a quicker rise in core temperature and a lower efficiency at cooling.”

“Our study not only quantifies temperature differences inside vehicles parked in the shade and the sun, but it also makes clear that even parking a vehicle in the shade can be lethal to a small child,” said co-author Nancy Selover, a climatologist and research professor in ASU’s School of Geographical Sciences and Urban Planning. “We’ve all gone back to our cars on hot days and have been barely able to touch the steering wheel. Imagine what that would be like to a child trapped in a car seat on a hot day, either in the sun or shade.” 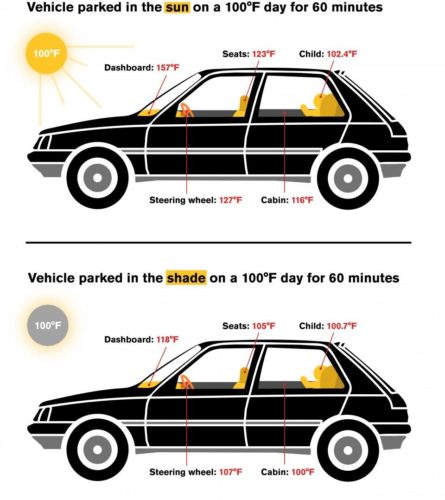 Temperatures inside a car warm up quickly, even when parked in the shade.
(Graphic: Safwat Saleem/ASU)

“These tests replicated what might happen during a shopping trip,” Selover said. “We wanted to know what the interior of each vehicle would be like after one hour, about the amount of time it would take to get groceries. I knew the temperatures would be hot, but I was surprised by the surface temperatures.”

“We found that a child trapped in a car under the study’s conditions could reach a body temperature of 104 degrees Fahrenheit in about an hour if a car is parked in the sun, and just under two hours if the car is parked in the shade,” said Vanos. “This body temperature could be fatal to infants and children — and those who survive may sustain permanent neurological damage.”

More than 50 percent of cases of a child dying in a hot car involve a parent or caregiver who forgot the child in the car.

“Children and infants are unable to control the environment, communicate well and often fall asleep during car rides,” said Vanos. “Even in our technologically advanced world, human error results in children dying every year in the U.S. from being left in hot vehicles. All of which are 100 percent preventable.”

The different types of vehicles tested in the study warmed up at different rates, with the economy car warming at the fastest rate and the minivan the slowest due to relative air volumes. 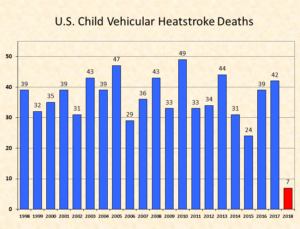 On average, 37 children die from heat stroke each year in the U.S. from being left in parked cars. (Graphic: noheatstroke.org)

A person’s age, weight, existing health problems and other factors, including clothing, will affect how and when heat becomes deadly. Scientists can’t predict exactly when a child will suffer a heatstroke, but most cases involve a child’s core body temperature rising above 104 degrees for an extended period.

“We hope these findings can be leveraged for the awareness and prevention of pediatric vehicular heatstroke and the creation and adoption of in-vehicle technology to alert parents of forgotten children,” Vanos said.

Hyperthermia and heatstroke effects happen along a continuum, she said. Internal injuries can begin at temperatures below 104 degrees, and some heatstroke survivors live with brain and organ damage. 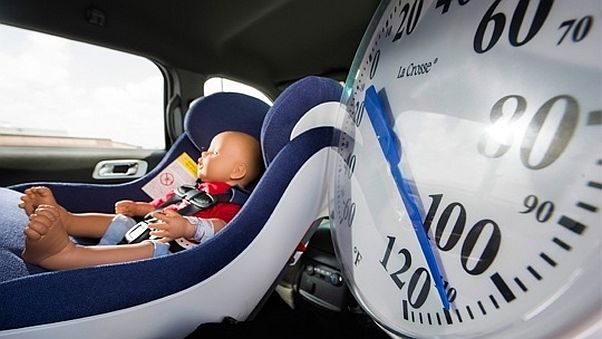 Forgetting a child in the car can happen to anyone, especially if your routine is interrupted. (Photo: AP)

Forgetting a child in the car can happen to anyone, said Gene Brewer, an ASU associate professor of psychology. Brewer, who was not involved in the heat study, researches memory processes and has testified as an expert witness in a court case involving a parent whose child died in a hot car.

Most people spend a lot of time on routine behaviors, doing the same activities over and over without thinking about them. For example, driving the same route to work, taking the children to day care on Tuesdays and Thursdays, or leaving car keys in the same spot every day. When new information comes into those routines, such as a parent’s day care drop-off day suddenly changing or an emergency phone call from a boss on the way to work, that is when memory failures can occur.

“These cognitive failures have nothing to do with the child,” Brewer said. “The cognitive failure happens because someone’s mind has gone to a new place, and their routine has been disrupted. They are suddenly thinking about new things, and that leads to forgetfulness. Nobody in this world has an infallible memory.”