You can serve buche de noel from Le Diplomate, 1601 14th St. NW, at your Christmas dinner 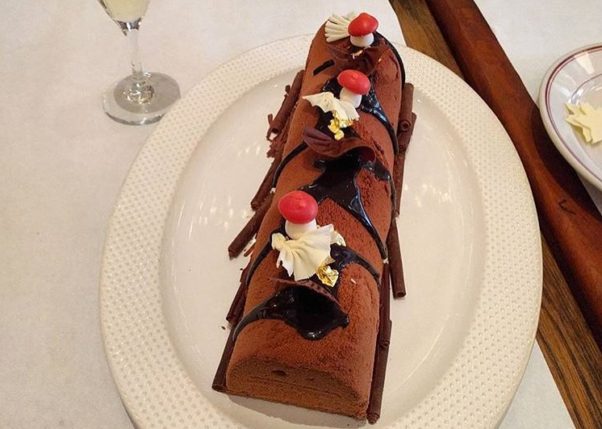 Pastry chef Fabrice Bendano is offering the intricately decorated buche de noel in two flavors: Mont-Blanc with chestnut sponge cake, silk mousse and poached spiced pear; and chocolate-praline made with dark chocolate mousse, milk chocolate cream, hazelnut dacquoise and pralines. Both feature handmade meringue mushrooms, sugar evergreens and woodland creatures crafted from hand rolled fondant. The desserts serve 4-6 and are $40 each They must be ordered by Dec. 19 and will be available for pick-up on Dec. 23 at noon.

The cocktails are available throughout winter for guests to warm up under fleece blankets on Le Diplomate’s heated patio or to in the dining room, which is adorned with twinkling lights, fresh garland, and handsomely decorated Christmas trees.

Bourbon Steak in the Four Seasons Hotel, 2800 Pennsylvania Ave. NW, continues its 12 days of cocktails this week. The restaurant’s bar and lounge will feature a different cocktail the 12 days leading up to Christmas. A portion of proceeds from any drink ordered during the 12 days will go to Four Seasons Washington’s Hands of Hospitality initiative to provide toys for local children in foster care. 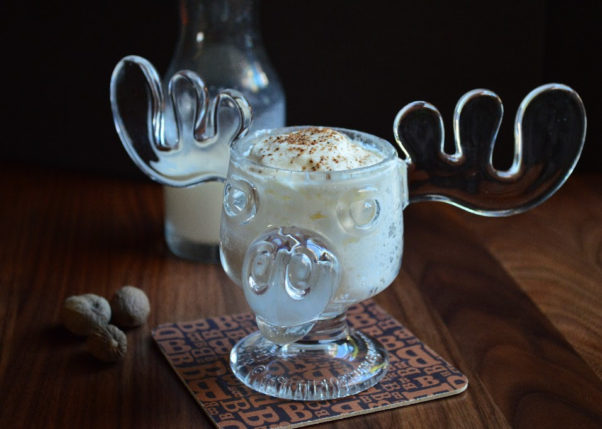 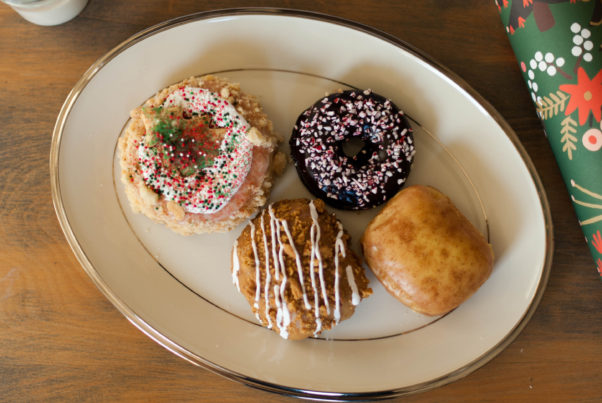 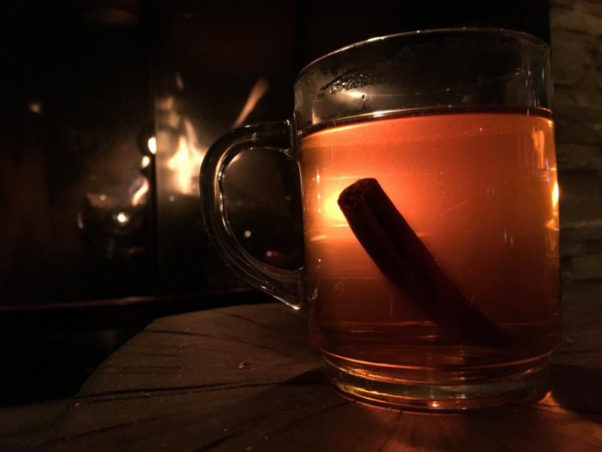 The warm drinks include cinnamon bun-topped chai cocktails, Mexican hot chocolate with chartreuse and spiked apple cider served on the glass-enclosed rooftop bar, which has overhead heat lamps, while the Balcony Room has become a wood-lined winter escape with a wood-burning fireplace and leather couch seating.

The Chai My Buns, a combination of Captain Morgan Spiced Rum, chai tea, soy milk and simple syrup comes topped with a warm, iced cinnamon bun. For the boozy Chocolate Without Borders, the restaurant stirs neighbor Pleasant Pops’ Mexican Chocolate Pop into a hot mixture of Ilegal mezcal and green chartreuse, topping it with a skewer of toasted marshmallows. And guests can choose to spike the hot apple cider mad with cinnamon, allspice and clove, with either bourbon or rum. 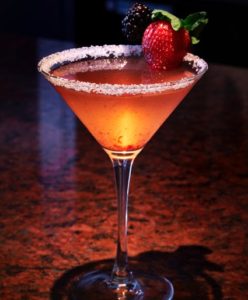 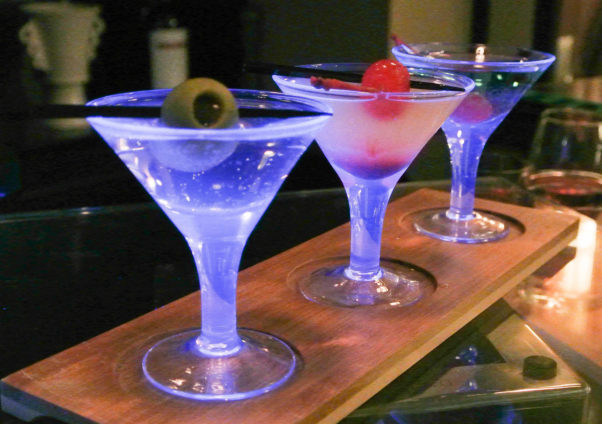 On Treasure Tuesdays, the restaurant is offering tax-free dining from 6-9 p.m. with the restaurant and lounge picking up the tax while guest enjoy live music by James Stevens. 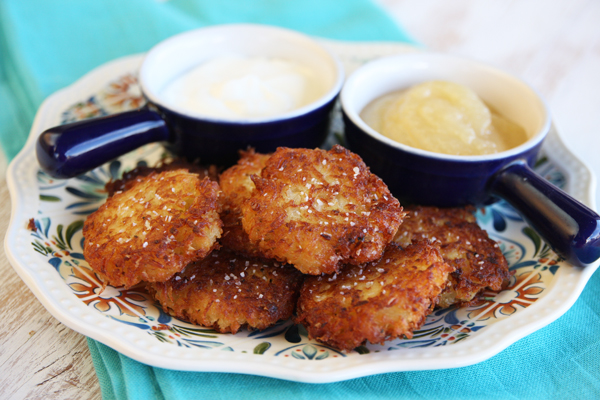 Tickets are $22 per person and include bottomless access to traditional, sweet potato and zucchini latkes as well as a deep-fried donut bar. Tickets can be purchased online or at the door. There is also a $38 ticket option online only, which includes two drinks from a selection of holiday specialty cocktails or house wine and draft beer. Drinks can also be ordered a la carte. 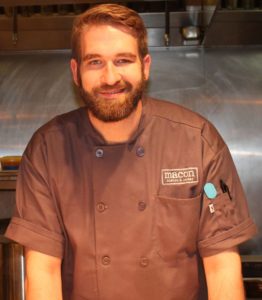 Stout, who attended L’Academie de Cuisine, has been the restaurant’s sous chef since November 2015. After graduation, Stout, who grew up in Raleigh, N.C., on his family’s farm, worked at Newton’s Table in Bethesda where he climbed from line cook to junior sous chef. Then he worked as the opening sous chef at Barrel and Crow before moving to Macon Bistro.

John Kerschensteiner is new chef at the Fainting Goat 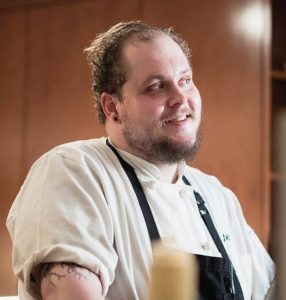 John Kerschensteiner is the new chef de cuisine at The Fainting Goat, 1330 U St. NW.

Kerschensteiner takes over the kitchen from executive chef Nathan Beauchamp who is moving to the company’s new Tiger Fork Hong Kong-inspired restaurant slated to open next month at 922 N St. NW in the former Rogue 24 space in Blagden Alley.

A Silver Spring native, Kerschensteiner was most recently executive sous chef at Graffiato. His grandparents owned The Quarterdeck in Arlington where he started part-time in the front of house in high school. He then staged in some Michelin-starred restaurants in New York including Gramercy Tavern, Eleven Madison Park and The Modern while he attended the French Culinary Institute there. After graduating, he work under Chef Dan Giusti at Georgetown’s 1789. After Giusti’s departure, Kerchensteiner went on to work in the kitchen as sous chef at Rogue 24, after which he briefly left to hold a sous chef position at Table before returning to Rogue 24 as executive sous chef.

“My passion of cooking was shaped by my family – my father loved to grill all day on his days off, and I am always striving to cook as well as my grandmother did. I get inspiration from everywhere, as trite as that sounds,” Krechensteiner said in a press release. I was trained in French and American cuisine, but I love Asian and Latin flavors and my menus will always revolve around seasonal and local ingredients with a modern and international influence.” 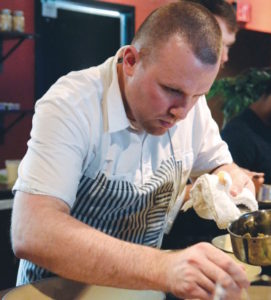 Ryan Ratino is the new executive chef at Ripple, 3417 Connecticut Ave. NW. The 26-year-old replaces Marjorie Meek-Bradley, who stepped down from both Ripple and Roofers Union to focus on her own pastrami shop, Smoked & Stacked.

Ratino, who will debut a new dinner menu at the Cleveland Park restaurant on Jan. 2, most recently was chef de cuisine at Masa 14 for about a year. Prior to that, he was executive chef at Virginia’s L’Auberge Provencale for nine months. He got his degree from Le Cordon Bleu in Orlando, Fla., and began his career in Florida where he worked as a junior sous chef for Shula’s Steak House at the Four-Diamond AAA award-winning Walt Disney World Swan and Dolphin Resort. That’s also where he worked as executive chef for Todd English at Bluezoo. His resume includes stops at Micheln-starred Caviar Russe, WD-50 and Dovetails NYC all in New York, as well as locally at Minibar by Jose Andres.

Ratino’s seasonal American cuisine with European roots will maintain Meek-Bradley’s relationships with area farmers when he begins in January. He said he plans to introduce an affordable tasting menu in addition to the a la carte offerings. He hasn’t decided yet if it will be three, four or five courses, but hopes to keep the price at $60 or less. 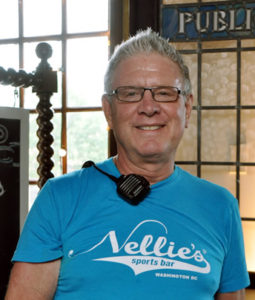 Lyon formerly serving was most recently director of operations at Nellie’s Sports Bar. Previously, he had been manager of the former Ten Penh and general manager of Ceiba, PassionFish and Teatro Goldoni. He had also been a manager at Bobby Van’s Grill.

“We’ve known Denny for many, many years, have first-hand knowledge of his professionalism and dedication,” says Bastille chef/owner Christophe Poteaux. “His success at Nellie’s, Bobby Van’s and the PassionFood Group convinced us that he would be a great team leader for Bastille Brasserie and Bar.”

Before entering the food service industry, Lyon spent four years in the Navy and then two years with the U.S. Department of Housing and Urban Development, assisting those displaced by hurricane Agnes. He then took a job at a club/restaurant in Southeast D.C. as a server. From there, he went to a corporate position with Marriott restaurants and then back to private restaurants.