The George Washington University Ron & Joy Paul Kidney Center has launched a kidney health education campaign in the DMV, which has the highest prevalence of kidney disease in the U.S. Advertisements encouraging residents to check their kidney health have started to appear on buses, with television, radio and digital media advertisements appearing throughout the next year.

“The incidence of end-stage renal disease in the Washington, D.C. area is striking,” said Tony Englert, director of the center, part of the School of Medicine and Health Sciences and the GW Transplant Institute at George Washington University Hospital. “Raising awareness about kidney health and treatment options is at the heart of what we do here at the Ron & Joy Paul Kidney Center, and is imperative for our community.”

The advertisements will go hand in hand with information sessions and free screenings across the city, but with a focus in Wards 7 and 8, where kidney disease is most prevalent.

“The fact is, 1 in 3 adults in the U.S. are at risk for kidney disease, and many of those who have kidney disease don’t even know they have it,” said Dr. Keith Melancon, chief of the Transplant Institute and professor of surgery. “Kidney failure is often preventable. A simple test can slow or even prevent kidney disease. We want people to know this.” 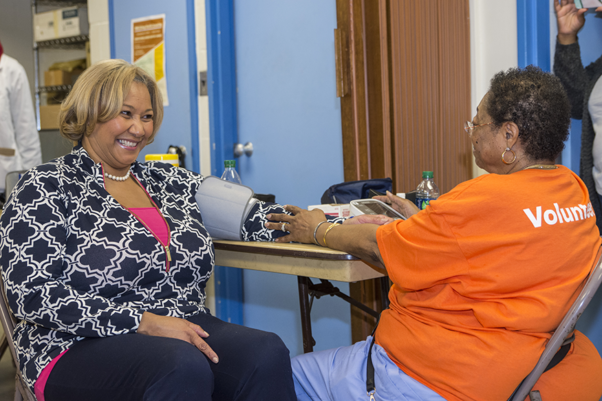 Chronic kidney disease, according to the National Kidney Foundation, has staggering statistics. Ward 7 is ground zero for kidney disease in the nation, and the incidence of end-stage renal disease is 44 times the national average. The key to fighting the disease is ensuring that those who are at greatest risk — people who have diabetes or high blood pressure, a family history of kidney disease and are 60 years of age or older — get screened annually. Although kidney disease typically has no symptoms in its early stages, it can be reversible if it’s caught early. If it’s not, a patient’s only recourse is either dialysis or a donation.

The kidney center was established with a $2.5 million gift from The Ron & Joy Paul Foundation, established by Ron Paul, chairman and co-founder of Eaglebank, and founder of Ronald Paul Companies, a real estate development company, and his wife, Joy.

“Early detection of kidney disease is critical. We hope that people see our advertisements, attend our events and decide to get tested — because it could save their lives,” said Paul, a two-time kidney transplant recipient. “Our goal is to ensure that people know their options and understand that there is life after kidney disease or kidney failure.”