Chef and restaurateur Mike Isabella plans to open Arroz, a Southern Spain and Tangier-inspired restaurant, in the Marriott Marquis Washington in early 2017. 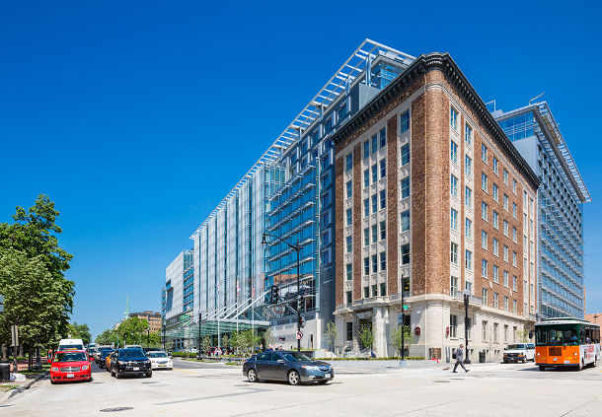 Restaurateur Mike Isabella will open the southern Spanish restaurant Arroz in the Marriott Marquis next to the convention center in early 2017. (Photo: Marriott)

This will be the fifth and final restaurant in the hotel at 901 Massachusetts Ave. NW in the Mount Vernon Square neighborhood across from the convention center. It will join the Dignitary whisky bar, High Velocity sports bar, the lobby bar and three-meal-a-day restaurant Anthem, which are all run by Marriott. It replaces Mercadito that Chicago restaurateur Alfredo Sandoval planned to build in the space on the 10th Street side of the hotel’s lobby, but which fell through.

Marriott hopes that the signature restaurant run by the celebrity chef, who appeared on season six of Top Chef and Top Chef Duels and was the runner-up on Top Chef All-Stars, will draw more locals into the property.

Arroz will be open for lunch and dinner seven days a week, as well as weekend brunch, and will focus on the cuisines of Valencia, Andalusia and Portugal, incorporating dishes from Tangier along with other North African influences. The concept will also be included in the 10-concept Isabella Eatery that will open later in 2017 at Tysons Galleria.

Natalie Park Design Studio will design the 246-seat restaurant that includes 124 seats in the dining room, 48 in the bar and lounge, 62 on an outdoor terrace with fire pits and 12 in a private dining area. It will feature a contemporary interpretation of Moroccan and Spanish architecture, motifs and colors.

There won’t be the usual cheese plates or Iberico ham like is found on the menu of José Andrés Jaleo (Isabella worked for Andrés at Zaytinya). The Southern Spanish menu will feature dishes such as paella and soupy rice along with fideos and regional tapas. There will also be selections from Portugal and Morocco including vegetable and seafood tagines and family-style dishes native to the Canary Islands. More familiar dishes like pan con tomate, gambas al ajillo and patatas bravas will be prepared Southern style. Arroz will also offer a selection of montaditos, bocadillos and croquetas, as well as egg-based dishes and large-format items.

The beverage menu will lean heavily Spanish and Portuguese with plenty of Iberian wine, including a number from the Toro, Rueda and Ribera del Duero regions. Cocktails will include several varieties of sangria, as well as gin and exclusively Spanish-made tonics. A large sherry and port list will explore interesting Spanish and Portuguese vintages of both.

“My favorite thing about dining in Spain is the incredible variety of the cuisine,” Isabella said. “Spaniards have strong regional identity, and it shows in their food culture. You can enjoy paella in Valencia, then drive down the coast a bit and experience completely different flavors and ingredients. Not many U.S. restaurateurs focus on Southern Spain, Northern Africa and Portugal. Those regions of the world heavily influence each other’s art, architecture and food, and those unique flavors are exactly what we are aiming to capture at Arroz.”

Not Your Average Joe’s opens in Silver Spring

Not Your Average Joe’s opened July 12 in downtown Silver Spring’s Ellsworth Place, 8661 Colesville Road. It is the chain’s 26th restaurant and the sixth in the DMV. 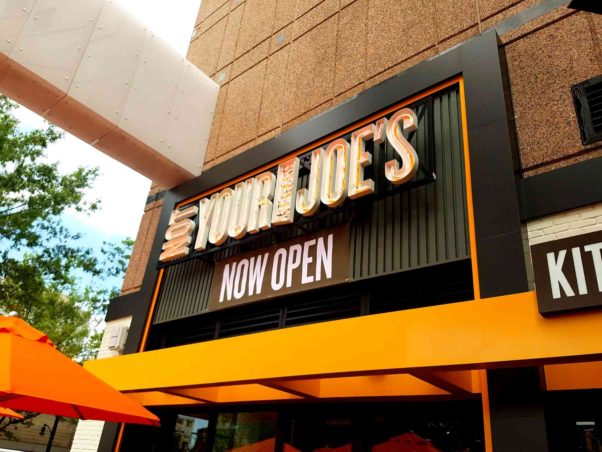 The summer menu, which will be served through October, includes spice-rubbed pork tenderloin served with summer vegetable ratatouille and preserved lemon-mint couscous; grilled chimichurri flank steak with Mexican street corn and black bean rice; and a watermelon-feta salad with candied pistachios, arugula and spinach in a light lemon dressing. The restaurant also has a gluten-free menu.

Knightsbridge Restaurant Group is incorporating Bardeo, 3309 Connecticut Ave. NW, into the neighboring Ardeo and replacing it with Bindaas, a 50-seat restaurant and bar, which will feature Indian street food and set to open next month.

Bindaas will replace Bardeo, which will be incorporated into neighboring Ardeo. (Photo: Urban Scrawl)

The menu will feature savory snacks and kebabs with vegetarian options, as well as pork, fish, chicken and beef street food priced from $9-$14. Group executive chef Vikram Sunderman designed the menu that includes dishes such as pathar gosht, a lamb kebab cooked in a stone oven served over a bed of saffron rice with saffron and cashews; uttapam, a fermented rice pancake with lentils and shrimp pepper; bhel puri, a seaside snack from Bombay with raw mangoes, lentils and puffed rice; and the kati roll with goan pork.

The beverage program will include an international wine list, Indian beers and whiskey, along with craft cocktails reflecting the spirits and spices of India. A meal at Bindaas will be in the $40-$45 per person range.

Martin Vahtra of Projects Design Associates of New York is designing the new restaurant. The interior will incorporate new flooring, acoustical tiles, new furnishings and a new mural. The open kitchen will become a test kitchen for the chefs to create everyday Indian “delicacies.” The exterior will be a new “Indian silk teal” color. Inside, there will be a wood wall of rustic reclaimed beams, influenced by Indian screens and shutters. As diners turn the corner, they will see a custom mural representing Indian graffiti and street life. New fabrics and paint will add a punch of jewel tone color to the space. Custom pendant lighting made from baskets will be added as a nod to the food markets of India along with new bar top lights. The back bar has been redesigned with new display shelves

The restaurant will open with dinner service and brunch will follow. Diners will also be able to book a reception in the 40-seat upstairs private dining room at Ardeo with its private deck patio, and have the food catered from Bindaas. 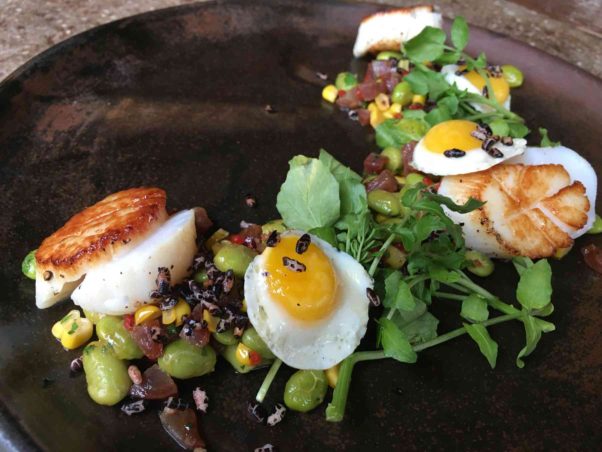 Miller has also incorporated wine into her dishes such as the mushroom tartine with a madeira reduction accompanying a trio of maitake, crimini and king oyster mushrooms on flaky puff pastry; the vino cheddar burger topped with red wine aïoli made from burgundy and pinot noir with Tillamook cheddar, avocado and cilantro; and a new dessert, the farm fruit shortbread for two with fresh strawberry, rhubarb, pink peppercorn and amaranth topped with a madeira Chantilly cream. 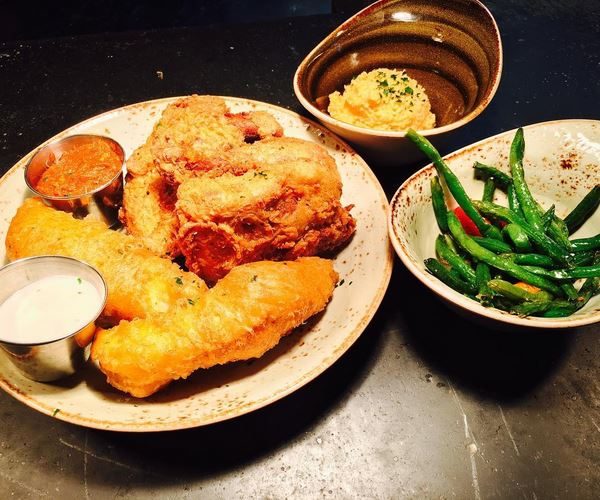 The restaurant has partnered with District Fishwife to feature a local, sustainable fish, which will be served alongside its fried chicken Sunday dinners. The special is available every Sunday during dinner service and includes Adobo marinated fried chicken, beer battered fish, Fresno chili crab dipping sauce for the chicken, house-made tartar sauce and two seasonal sides at market. Recent fish varieties have included invasive species like snakehead and blue catfish.

ShopHouse Southeast Asian Kitchen, which has locations in Chinatown, Dupont Circle, Georgetown, Union Station, Bethesda, North Bethesda, and Silver Spring, has added crispy spring rolls at all its restaurants in the DMV. 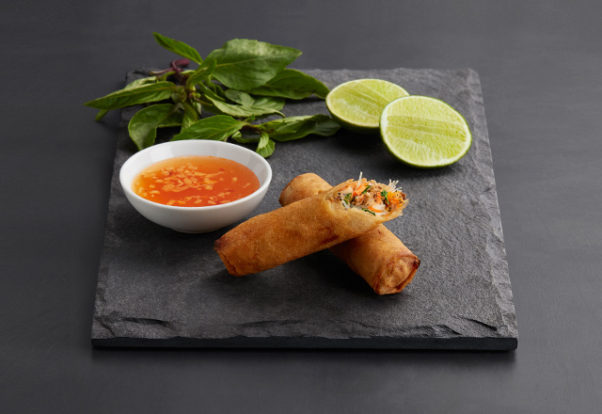 The dish includes two spring rolls filled with chicken, fresh vegetables and glass noodles, served with a chili-lime dip for $3.25.

Bruster’s Real Ice Cream, 18519 N. Frederick Ave., Gaithersburg, in the Floor & Decor Shopping Center., will celebrate its 10th anniversary from 4:30-6:30 p.m. on Monday, July 18. During that time, anyone who is 10 years old will get a free small waffle cone. There will also be raffle drawings for free ice cream, sundaes and milkshakes, and Chuckles the Clown will make balloon creations. 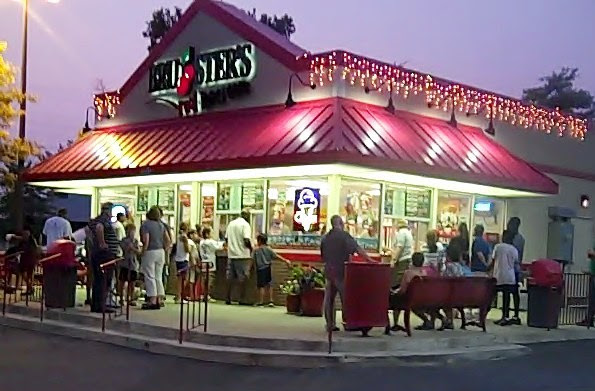 “We are proud to have hired, trained and retained many local residents, most of them high school and college kids, as scoopers, ice cream makers and crew leaders,” said owner Bob Fischer. Two of the store’s first employees, Madison Ellis and Delany Tenca, who helped open the store, will be recognized for their 10 years of service.

Nezzar Battle is the new executive chef at the 14K Restaurant and Lounge at The Hamilton Hotel, 1101 14th St. NW. Battle brings more than a decade of experience to his new, having previously worked at hotel and resort restaurants. 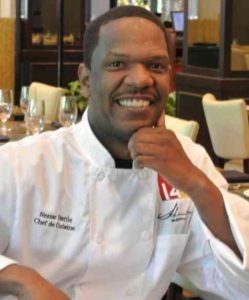 Battle comes from the Kessler Collection Bohemian Celebration Hotel in Orlando, Fla. Prior to his tenure there, Battle oversaw kitchen operations at the 4-Diamond Squaw Creek Resort in Lake Tahoe, Calif., as well as at Silver Tree Hotel in Aspen, Colo.

“I am well-aware of the popularity of Sunday brunch in the D.C. Metro area,” said Battle. “We will be providing our guests more of what they love in that regard, with a fresh spin and some delicious new flavors.” 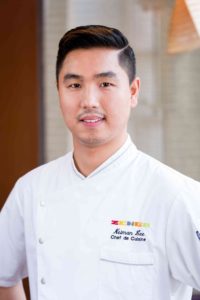 Born and raised in South Korea, Lee began his culinary career at the five-star Kolon Hotel in Gyeongji, South Korea, before graduating from Keimyung College University in Dae-Gu. He then accepted a position as a hot station sous chef at the Broi Restaurant in the Ariana Hotel in Dae-Gu. In 2006, he joined the South Korean National Army where he prepared and managed daily meals and banquets for 1,800 soldiers. After serving two years, Lee accepted the position of head chef at the three-star Anyjoy Western Contemporary Cuisine in Dae-Gu.

In 2009, he relocated to the U.S. and worked at restaurants including the Sinobi Japanese and Korean Fusion Restaurant and Big Y Restaurant Group in Pittsburgh, the Hollywood Casino at Penn National Race Course in Grantville, Pa., and at The Gettysburg Hotel in Gettysburg.

He enrolled in the International Culinary Center in New York City and earned his culinary arts degree in 2015 then worked as senior sous chef at the modern Japanese restaurant Zuma in New York before coming to Zengo in June.