The risk of developing heart disease and diabetes may be lowered by a diet higher in a lipid found in grapeseed and other oils, but not in olive oil, a new study suggests.

The finding could have implications in preventing heart disease and diabetes, but also could be important for older adults because higher lean body mass can contribute to a longer life with more independence, said Ohio State’s Martha Belury, a professor of human nutrition who led the research.

But there’s a catch. Low-cost cooking oils rich in linoleic acid have been disappearing from grocery shelves, fueled by industry’s push for plants that have been modified to produce oils higher in oleic acid.

The research team also looked at the health effects of oleic acid, found in olive oil and some other vegetable oils, as well as long-chain omega-3 fatty acids, found in fatty fish including salmon and tuna.

Though inflammation decreased as blood levels of those fatty acids rose, higher levels of oleic acid or long-chain omega-3s did not appear to have any relationship to body composition or signs of decreased diabetes risk despite longstanding recommendations that people eat more of these “healthy” fats. “It really kind of popped out and surprised us,” Belury said.

Previous research found that taking linoleic acid supplements increased lean body mass and lowered fat in the midsection. As little as a teaspoon and a half was all it took, Belury said. The current study is the first to examine linoleic acid alongside body composition and other health markers in people who hadn’t been given supplements or prescriptive diets, she said.

Because of previous research showing cardiovascular benefits of linoleic acid, the American Heart Association in 2009 recommended people take in at least 5 to 10 percent of their energy in the form of omega-6 fatty acids, which includes linoleic acid.

But U.S. consumption of linoleic acid is declining because of genetic modification of plants for food manufacturers seeking oils higher in oleic acid, Belury said. There’s been a pronounced shift in the last five years, she said, and it is linked to the push against trans fats. When linoleic acid is made solid (hydrogenated) for processed foods, it is more likely to convert to trans fat than its oleic cousin.

So oils, notably safflower, sunflower and soybean, now routinely contain less linoleic acid – it often makes up less than 20 percent of the fatty acids in commonly purchased oils, based on food labels and confirmed by testing in her lab, Belury said. 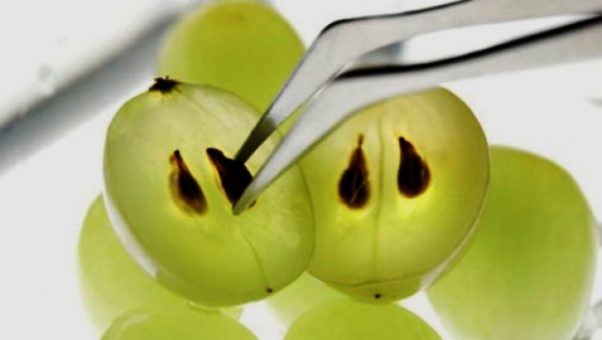 Grapeseed oil for now remains an excellent source of linoleic acid, which constitutes about 80 percent of its fatty acids, she said. Corn oil also remains a decent source, she said.

The team used data from two previous studies that focused on stress and included 139 people. In those studies, researchers assessed body composition using DXA scanning, an advanced way of measuring fat and muscle mass. They tested blood drawn after the men and women fasted for 12 hours, calculating the amount of linoleic acid (and other fatty acids) in red blood cells. All of the linoleic acid in our bodies comes from food.

They also evaluated the blood for insulin resistance and two markers of inflammation that are connected with disease. Then they plotted results for each health category against the group’s results for each of the three fat categories: linoleic acid, oleic acid and long-chain omega-3 fatty acids.

Belury said the study doesn’t explain the apparent interplay between linoleic acid and measures of risk for heart disease and diabetes. It shows an association between those things, but not a cause and effect. And its power is limited because it relied on looking back on two previous research efforts and those involved middle-aged men and women who were slightly healthier on average than the general population.

The study participants lived in and around Columbus, Ohio. It’s possible that the results would have been different in a population with diets that tend to be higher in omega-3 rich fatty fish, Belury said.

Article by The Ohio State University