There’s so much to dislike about air travel these days — long lines, cramped seats, delays and the bad airline food. A recent survey by Diet Detective found that airlines have a long way to go in making their meals and snacks nutritious and low in calories. 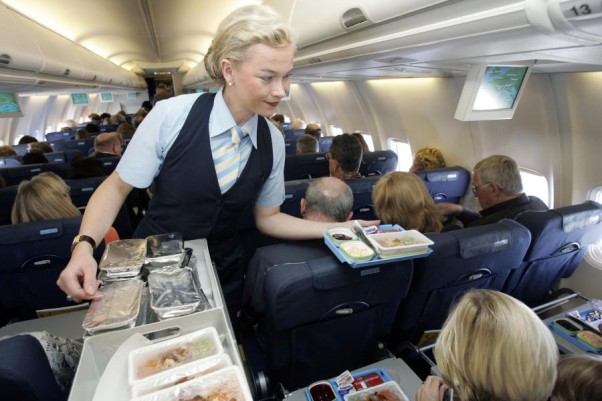 A recent study ranked the food served on the 12 major U.S. carriers, and Virgin America came out on top. (Photo: Alamy)

In the annual survey, Charles Platkin, a nutrition professor at Hunter College and the City University School of Public Health, rated the food served in economy class on 12 major U.S. airlines, ranking them from five stars to zero stars based on 10 criteria including health and calorie levels of meals, snack boxes and individual snacks, improvement and maintenance of healthy offerings, menu innovation and cooperation in providing nutritional information. He’s done the survey for 14 years.

“This year Virgin America wins the top spot again with the ‘healthiest’ food choices in the sky with Delta and JetBlue tied for second,” Platkin said. “Frontier Airlines received the lowest score, was the least cooperative and received a low health rating.” Most airlines are also failing to provide nutritional information about their menu items that would allow passengers to make the healthiest choices, he added. 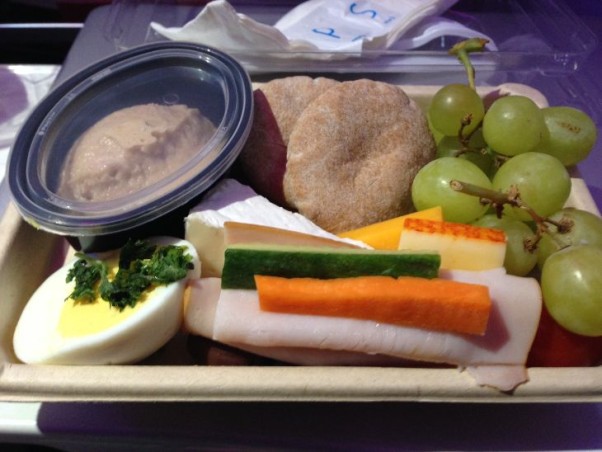 Virgin America scored the best on Platkin’s survey with a 15 percent reduction in calories. “Average calories for all items on Virgin America fell this year from 386.25 to 352.27 – a 34 calorie drop – that’s good news,” he said. “But I still don’t understand why (Virgin America) doesn’t put all their nutritional information on their website and in the air.” He said it is best to avoid the airline’s individual snacks since none of them is very healthy. Even the nuts, which are the best choice, are high in calories if you consume the whole package. “Another year and the snacks are still the same – can’t we get at least one super healthy snack? How about an apple or an orange?”

For breakfast, Plotkin recommends the Udi’s Granola with Yogurt and Fruit, which is a bit high in sugar but overall low in calories at 330. The best snack box is the Protein Meal with hummus, nuts and tuna. Kids should skip the Jet Set Kid Pack and eat the half peanut butter and jam sandwich.

Delta, which used to have some of the most unhealthy food, has turned around and came in second. A feat Platkin attributes to the fat that some of the meals are made by Luvo, a frozen food manufacturer with a commitment to healthy eating.

He recommends the free peanuts served on flight longer than 1.5 hours. None of the individual snacks is a good choice, he said. If you do get the nut mix, he recommends sharing it with at least two others. The snack boxes are also high in calories. Good choices within the EATS Tapas box include the hummus, bruschetta, olives, almonds, apricots and dark chocolate. Skip the rest, and make this a meal, not a snack. Of the breakfast options, on almost all flights you will see the continental breakfast. It’s 300 calories, but you can skip the muffin and save calories. If you’re on a transcontinental flight, your best bet is the Luvo Fresh Breakfast Medley without the muffin. For lunch/dinner on regular westbound flights, the Luvo Grilled Chicken Wrap, and on eastbound flights the Luvo Roast Turkey & Havarti Wrap, are good choices. Again, you can skip the cookie to save calories. On transcontinental flights the Luvo Quinoa Crunch Wrap Snack Box is a good choice and will fill you up. However, he says to skip the high calories in the Roast Beef Slider Combo or the Black Angus Burger.

JetBlue tied with Delta for second place. “Not much has changed with JetBlue except that the calorie count for the snack boxes is up by an average of 30 calories from last year,” he said. “The individual snacks are still low in calories and nutritional value. The airline is showing progress, however, by posting nutritional information for its meals.”

Platkin advises that just because the individual snacks are free doesn’t mean you should take more than one. If you buy the New York Nut Factory Omega-3 Mega Mix you need to share it with at least three other people and avoid the jerky if you’re sodium sensitive. As for the meal boxes, Pump Up has healthy ingredients including Mary’s Gone Crackers-Original, olives, humus and raisins, but remember that it’s a meal and not a snack. Skip the other meal boxes, which are high in calories and fat and offer little in terms of nutrition. If you are on a flight that offers the Eat Up Café, the yogurt and granola, Kale & quinoa salad, spicy soba & Korean-style chicken, and the veggie platter are all good choices. Skip the grilled chicken and brie sandwich, which is very high in calories and low on nutrition.

Although technically not a U.S. carrier, Platkin included Air Canada because it has many flight into and out of the U.S. “The staff is VERY helpful in getting the information out, which is nice, and shows that Air Canada cares about its food,” Platkin said. “It keeps calorie counts low for meals. That’s the good news. The bad news is that when I look for healthy choices, defined as high in nutrient value, there is not a lot to choose from.”

His best bets for breakfast include the Greek yogurt parfait and the egg sandwich has bacon. Even though it has bacon, it’s still low in calories. If you’re looking for a snack, pick the chicken soup, which he said is more like a meal than a snack. The cashews or almonds need to be shared. The celery and carrots with ranch dip if you limit the dip to no more than half, is also a good choice. While the hummus sounds healthy, the pretzels offer little nutritionally, and you’d be better off having a meal if meals are available. The chicken club wrap is good; it has turkey bacon, which is better than regular bacon, but he says to skip the falafels. On flights of more than four hours departing from Montreal, Toronto and Vancouver, the sushi is a very good choice. 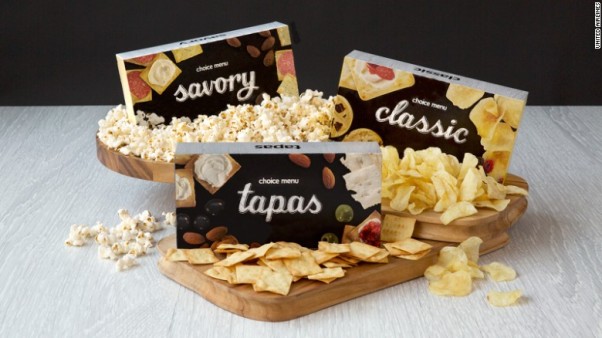 United Airlines is tied with Air Canada for third. “The snacks and snack boxes are moving in the wrong direction,” Platkin said, with “more calories, not fewer. But the meals are getting lower in calories. The breakfast offerings are strong, but lunch and dinner are so/so.”

He recommends the sweet and savory bistro blend trail mix if you share it with three others or the tapas snack box, which is high in calories but has many healthy foods including almonds, olives, hummus and bruschetta. Just don’t eat the cheese spread. You should also share it unless you’re eating it as a meal. Skip the classic and savory snack boxes. For breakfast, your best bet is the Fresh Start Breakfast Selection or the oatmeal.Skip the ham baguette. For lunch and dinner, the wrap and salad combo, while high in calories, is best. Skip the country bowl even though it’s low in calories. And definitely skip the Italian sandwich at 741 calories.

Although American Airline’s average snack calories have gone down significantly, it has also cut back on choices with only two lunch and dinner options and three breakfast selections.

For snacks, he said the hummus and chips are the best choice. Skip the snack box unless you toss the salami and cheese. The chicken cobb salad is a good choice, while the Asian chicken wrap is a bit high in calories. For breakfast on flights of more than two but less than three hours, you can get the snack pack with almonds. On flights of three hours or more, the breakfast sandwich is OK, but the fruit and cheese plate with nuts is better if you share it with your seatmate.

Alaska Airlines, which ranked fifth, increase the average number of calories in their food from 444 to 537, while the calories in an average meal went up from 456 to 606.

He recommends the Mediterranean tapas among the snack options. It has olives, hummus, almonds, dried fruit and a dark chocolate bar. But keep in mind that 497 calories is a bit high for a “snack” or even a meal, so it’s best if you share the box or have it as a meal replacement. For kids, the snack box may be tempting, but it’s better to eat a meal. The beef jerky is low in calories but very high in sodium. As far as breakfast goes, you have one high calorie, unhealthy choice and a somewhat healthy fruit and cheese plate. Skip the crackers and half the cheese. For dinner, the best bet is the homestyle chicken dinner at 453 calories. 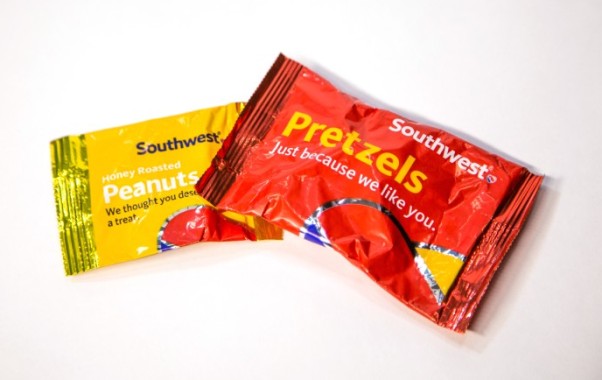 In sixth place, Southwest Airlines doesn’t offer much variety or much in terms of nutritional value, Platkin said. He recommends getting the nuts and skipping the pretzels and other items.

Allegiant Air, which was tied for sixth, has eliminated many of its healthier selections including chips and salsa and fruit and cheese plate, he said. But, it also eliminated its high calorie Italian sandwich and other not-so-healthy snacks.

He said the hummus is the best of the snack boxes. Avoid the Deli Snack Pack and don’t let your kids near the Wingz Kids Snack Pack. Among the individual snacks, nuts are the healthiest choice.

In seventh place, Spirit lost points because of its unwillingness to provide nutritional information. Many of the snacks for sale are more than 400 calories, and the Jumbo-Size Combo is 840 calories per bag. You’re better off going with the 290-calorie cup of noodles or sharing one of the 400-calorie muffins. Avoid the nuggets and nuts with 600 calories Platkin said bringing your own food is the best option.

Tied for seventh, Hawaiian Airlines offers a large selection and free meals, but Platkin said they are all high in calories and couldn’t come up with a single recommendation. He said to eat before you go or to bring your own food.

Coming in last, Frontier Airlines would not provide nutritional information for its food. His advice is to take your own food since the airlines options, like potato chips, Twizzlers and Almond M&Ms are low in nutritional value. If you can’t, he recommended the beef jerky with 120 calories, but noted it is high in sodium.

The best option always, Platkin said, is to take your own snacks. Buy water after you pass through security. He recommends packing shredded wheat or low-calorie cereals, fresh fruits such as apples and oranges, salads, energy bars, pre-cut sandwiches, peel-and-eat tuna or salmon cups, nuts, all-natural fruit roll-ups with no sugar added, whole-wheat crakesrs or beef jerky, if you aren’t watching your sodium.