Franchise Disappoints Any Day of the Week

Sometimes you’re in a hurry, don’t want to spend a lot of money or just want something familiar, so you head to one of the casual chain restaurants: Olive Garden, Ruby Tuesday’s, Appleby’s, Chili’s, etc. and you know what you’ll get no matter if you’re in Detroit or the DMV. 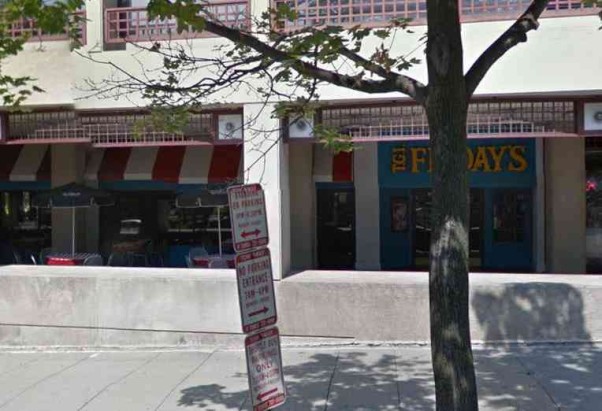 The TGI Friday’s along Pennsylvania Avenue in Foggy Bottom is in need of an overhaul. (Photo: Google Maps)

So when you visit these chains, the one variable is service. Some are great while others not so much. Unfortunately, the TGI Friday’s, 2100 Pennsylvania Ave. NW, near George Washington University is not the most stellar restaurant of the chain. In fact, during a visit last week, I think it ranked at the very bottom of the list.

I had an appointment in the area last week, I was by myself and I didn’t want to lose my Stripes rewards points. Since it is the last Friday’s in the city and I was a block away, I figured I would grab a decent bite and be on my way.

Unfortunately, that was not the case. First, this franchise is in terrible condition. It has never been remodeled and still has the chain’s original décor – blue front with yellow letters, red and white striped awnings. Inside there’s the outdated brick floors, raised square bar, brass rails and multi-level dining with chipped booths and ripped banquettes.

Last Tuesday, I asked for a booth, but was told they weren’t seating anyone in them since water was leaking out from beneath the raised bar. There were puddles on the floor and towels under the tables. My waitress later told me water had been streaming out earlier, and that a plumber had been in but couldn’t find anything so it must be “a foundation problem.” The plumber was expected back that evening. 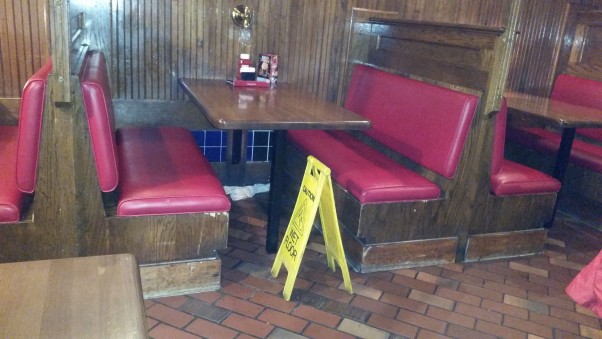 Water was leaking from the raised bar into booths. (Photo: Mark Heckathorn/DC on Heels)

OK. Fine. Accidents happen, although I’m not sure what D.C. Department of Health regulations are concerning a flooded restaurant. I’d think it would should have closed until the problem could be fixed.

After being seated and getting my drink, it took a while for the waitress to take my order. But I finally ordered the Jack Daniels chicken, two chicken breasts served with two sides. I chose broccoli and the mashed potatoes with green onions. However, when the food runner finally brought my plate after about 15 minutes, there was only one plain chicken breast.

I explained the order was wrong — I had ordered the Jack Daniels chicken, which was supposed to have two chicken breasts and BBQ sauce. The food runner said the item she had was the bourbon barrel chicken, which only came with one breast, coleslaw and tomato mozzarella salad, according to my menu, but they had the correct sides. 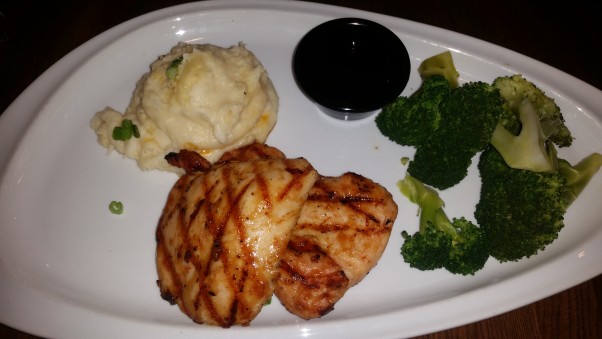 She said she would check and took the dish back to the kitchen only to return with the same dish a few minutes later and tell me that was what I had ordered. When the waitress came over, they continued to argue, despite the fact the chicken on the plate was with the sides I ordered and not the sides listed on the menu. Finally, I asked for the manager who showed up a few minutes later without a clue as to why I had asked to see him. After I explained, he agreed the food runner shouldn’t have argued with me about my order but never apologized. All he asked was if I wanted him to re-order and didn’t even offer anything for the mix up.

When the correct dish arrived, it was nothing like the full plate pictured in the menu. There were two tiny chicken breasts – from birds the size of pigeons – a few broccoli tops and a small mound of mashed potatoes with five pieces of green onion on top. 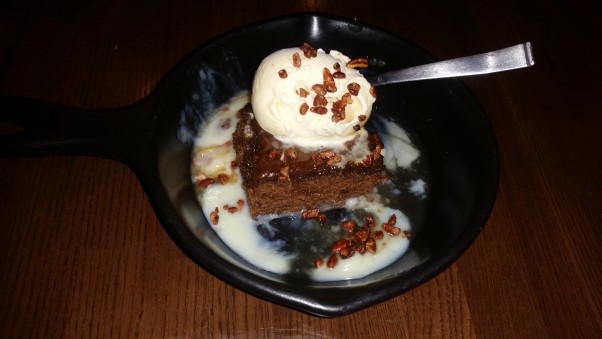 The Tennessee whiskey cake was the best part of this TGI Friday’s dinner. (Photo: Mark Heckathorn/DC on Heels)

For dessert, to use my Stripes reward, I ordered the Tennessee whiskey cake, which was the best thing I tasted all evening. It was a warm toffee cake topped with glazed pecans served with butterscotch Jack Daniel’s whiskey sauce and a scoop of vanilla ice cream. You could really taste the butterscotch.

Unfortunately, this location has outlived its prime. It must be the GW students who keep it in business, although it needs a complete overhaul if it is to survive. Next time you want something quick and not too pricey, don’t go to this TGI Friday’s. There are other reasonably priced alternatives including Burger, Tap and Shake, Rott, Johnny Rocket’s and a Whole Foods with a hot bar all within a block. Save the hassle and your stomach, and walk the extra block.