When a mosquito decides to dine on your blood, you typically know it – there’s pain, itch and annoyance. Ticks, on the other hand, take a stealthier approach. They often burrow into hard-to-spot areas and hanging around for hours or days at a time. 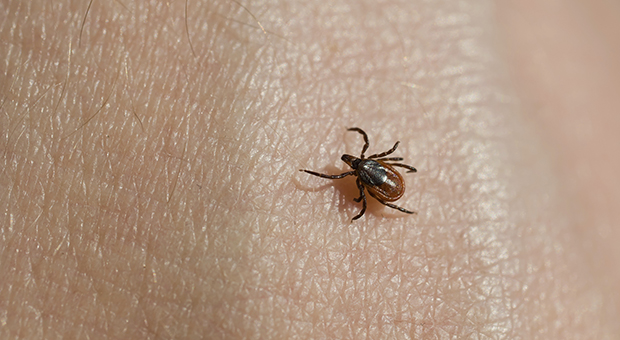 The blacklegged deer tick, which lives in much of the northeastern United States and the upper Midwest, can cause Lyme disease, a bacterial infection named for the Connecticut town where it was discovered in the 1970s.

Often diagnosed by the telltale bulls-eye rash it produces, the disease is also known to be the cause of unexplained fatigue, chills, fever, headaches and muscle or joint pain. Drooping or paralysis of one side of the face can be another indication of the disease.

While many people who get Lyme disease find a tick on their bodies or develop the rash, those who experience only the other symptoms can be diagnosed using a blood test that measures the body’s immune response to the bacteria that causes the disease.

“Because of the way the bacteria works, once it is through the skin, it can go anywhere in the body,” said Dr. Kit Heron, a family medicine physician with Penn State Hershey Medical Group. “Your symptoms depend on where it goes.”

Many cases are treated with a three-week course of doxycycline or another antibiotic, which can often cure the disease. As with most illnesses, the earlier it is diagnosed and treated, the better.

“The longer the bacteria stays in your body, the more time it has to damage tissues,” Heron said.

Scientists are still researching whether the disease can resurface once treated. “Once you hit it with antibiotics, most cases resolve without issue,” Heron said. “We have a fairly reliable treatment regimen, but we’re still working on the finer points of it.”

Preventing Lyme disease doesn’t involve confining yourself indoors or cocooning yourself in plastic wrap for a walk in the woods. Using an insect repellent with 20 to 30 percent DEET – as well as wearing long pants and long sleeves when walking in areas of high grass or leaf litter – can help keep the unwanted parasites at bay.

When you return indoors, toss your clothes in the dryer on high heat for an hour to kill any hitchhikers. Inspect your skin thoroughly and pull off any interlopers with sharp tweezers.

“We don’t recommend squishing them,” Heron said. “But do toss them in alcohol or put them on sticky tape so they don’t reattach to someone else.”

Many times, ticks hide in hard-to-detect areas such as the scalp, groin, back, armpits and the backs of your legs. “If it’s in a spot you can’t get to or if you feel uncomfortable taking it off, call your doctor,” he said. “A tick has to be on you for some period of time – usually more than 24 hours – before it causes problems.”