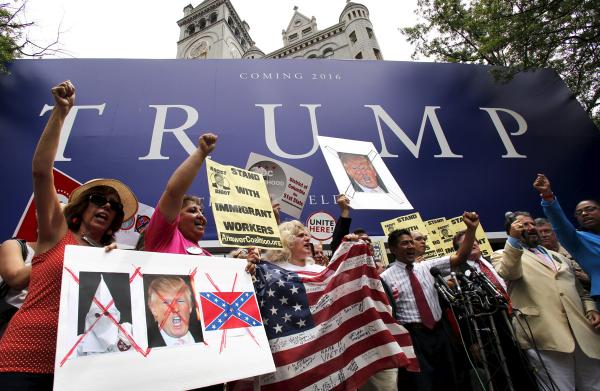 In 2013, Trump signed a 60-year lease for the building with the federal government’s General Services Administration. He broke ground on the project last year. Andrés was set to head the hotel’s flagship restaurant and Zakarian had planned to open a restaurant called The National, an American Bistro, in the hotel. It would have been Zakarian’s first D.C. hotel.

Both pulled out after earlier this week after Trump, a Republican who is running for president, called Mexican immigrants drug peddlers and rapists in a campaign speech on June 16.

“Donald Trump’s recent statements disparaging immigrants make it impossible for my company and I to move forward with opening a successful Spanish restaurant in Trump International’s upcoming hotel in Washington, D.C,” Andrés said in a statement to the Washington Post on Wednesday. “More than half of my team is Hispanic, as are many of our guests. And, as a proud Spanish immigrant and recently naturalized American citizen myself, I believe that every human being deserves respect, regardless of immigration status.” Andrés became a U.S. citizen in 2013.

“José has no right to terminate or otherwise abandon his obligations under the lease.” Trump’s son, Donald Trump Jr. said. He also threatened to take legal action to recover rent for the entire 10-year term together with all attorneys’ fees and additional damages we may sustain.” He said the organization would also enforce exclusivity provisions preventing Andrés from opening a competing restaurant anywhere in the D.C. area.

Zakarian pulled out Thursday. “The recent statements surrounding Mexican immigrants by Donald Trump do not in any way align with my personal core values,” Zakarian said in a statement to the national website Eater. “In light of this, I am unable to move forward with a restaurant in the Trump International Hotel, slated to open in Washington, D.C.’s Federal Post Office building. Zakarian Hospitality employs many immigrants from nations all over the world, and I look forward to continuing this business culture in my future restaurants. We are a nation built from immigrants, my family included.”

But Trump’s organization said Zakarian was just using Trump’s comments to renege on his lease. “We know Geoffrey Zakarian very well and this decision has absolutely nothing to do with his ‘core values.’ Zakarian is using the distortions by the media of Mr. Trump’s comments in an opportunistic attempt to renege on clear and unequivocal obligations under his lease. Zakarian has put up a non-refundable $490,167 deposit and has fully guaranteed the lease. Construction at Trump International Hotel, Washington D.C. is under budget and ahead of schedule. Donald Trump is investing hundreds of millions of dollars to restore this national treasure and employing many hundreds of people in the process. Zakarian’s foolish decision will be his loss and will have no effect on the completion and success of this project.”

On Thursday, about protesters rallied in front of the hotel’s construction site carrying signs reading “You’re Fired,” Trump’s catch phrase from his TV show The Apprentice, “Stand with immigrant workers” and “I’m not a raper.” Others passed out buttons that read “Dump Trump.” Speakers called for the federal government to remove the Trump name from the project.

The Riggsby Opens for Dinner on Monday

The Rigggsby, the new restaurant in the Carlyle Hotel, 1731 New Hampshire Ave. NW, will open for dinner on July 13. Owned by James Beard Award winning-chef Michael Schlow, it will serve an American menu with a nostalgic, continental slant.

Staff at The Riggsby train for opening day. (Photo: The Riggsby/Facebook)

The menu includes updated favorites divided into bar snacks, appetizers, entrées and sides. The menu was inspired by the convivial cocktail party culture of Schlow’s parents’ generation, in which neighbors would contribute their own signature dishes to the festivities, and mid-century modern classic cocktails.

“The Riggsby will pay homage to a bygone era, but still feel current,” Schlow said in a press release. “I want our guests to feel like they’ve just walked into a really great cocktail party.”

The 75-seat restaurant was designed by Brian Miller of Edit Lab at Streetsense, who was inspired by the supper club atmosphere found in many American restaurants in the mid-20th century. A keyhole door and graphic black and white tiles mark the entrance, and the dining room features a chevron walnut floor with dark inlays, a zinc bar top and oak tambour panels. Brass and gold-toned light fixtures lend a warm glow to the space, which features glossy jewel tones of plum and emerald green. Area rugs soften the lounge, which seats 40 and features custom wallpaper based on a painting by Schlow’s wife, Adrienne Schlow.

Chef Philippe Reininger, formerly of J&R Steakhouse at the W Hotel, will lead the kitchen. The two have planned a menu with dishes such as oysters with spicy cucumber mignonette; smoked trout with beets and horseradish; seared scallops with mushrooms, peas and onions; and prime New York strip with Reininger’s béarnaise sauce.

The Riggsby will initially begin with dinner service, seven days a week; from 5-10:30 p.m. Weekday breakfast and weekend brunch will be added in the future.

ShopHouse Southeast Asian Kitchen has added summer squash with Thai basil, garlic and chiles to its menu. The summer squash replaces eggplant for the summer, while kale with chilies and vinegar remains on the menu along with green beans and charred corn.

Sourced locally whenever possible, ShopHouse’s vegetables are cooked quickly in a blisteringly hot wok and tossed with fresh herbs and Thai chiles before being added to a customizable bowl with a base of rice, noodles or salad.

Le Diplomate, 1601 14th St. NW, will host an extended Bastille Day fete converting its patio into a streetside pétanque court. Quenelles and savory specials will be shared and a menu of special themed cocktails will be showcased. Although the actual holiday is on July 14, the restaurant will extend the party to July 11 and 12.

Surrounded by festive Bastille Day décor, guests will be entertained by a mime, which is commonly found on Paris streets. In addition to the regular menu, executive chef Michael Abt will serve quenelles de brochet with nantua sauce as a Bastille Day special, giving guests an opportunity to taste a French delicacy that is rarely served in the U.S. The quenelles are made with pike fish and served in a cassoulet dish with a creamy crayfish filled nantua sauce.

Between courses, diners can play a round of pétanque, a classic French game similar to bocce where two teams compete to throw hollow metal balls closest to the target wooden ball. Players can enjoy a selection of special French tipples, such as Egalité with Grey Goose cherry noir, Combier Cassis, Cointreau & lemon, Liberté with Lillet blanc, Citadel gin and saffron bitters, Fraternité with Dubonnet rouge, Domaine Tariquet, 3 Star Armagnac, bitters & lime, and Pastis cobbler with Pernod, cucumber, mint and orange. There is also a large carafe cocktail that serves 4-5 guests. The floral and effervescent Saint Antoine with St. Germaine elderflower liquor, house-made peach shrub and sparkling wine will be served in a complimentary St. Germaine pitcher that guests can take home. For non-drinkers and little ones who want to celebrate, Le Diplomate will also be serving the Cosette, a virgin cocktail made with mint, basil, cassis syrup, lime and ginger ale.

Guest bartender Rico Wisner of Ambar and guest chef Brad Walker of Boundary Road will resurrect cocktails and snacks from the disco era during Cashion’s Eat Place’s monthly “Decades of Cocktails” series from 10 p.m.-midnight on July 12. 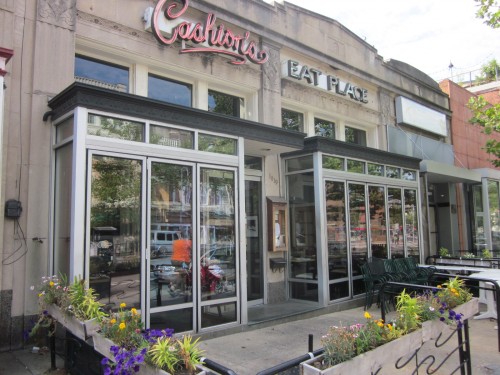 Cashion’s Eat Place in Adams Morgan will celebrate the 70s on Sunday night with special cocktails and dishes. (Photo: Popville)

Wisner will revive the Harvey Wallbanger with his #HarveyIsNotImpressed, which combines Galliano, a sweet herbal liqueur, with vodka, blood orange juice, homemade ginger beer and lavender bitters for a current take on the retro sip. Walker will serve a special menu of nostalgic snacks throughout the evening, such as crab imperial stuffed artichoke ($12), pineapple shrimp cocktail ($8), clams casino ($12), cocktail weenies ($10) and duck a l’orange ($12).

On Aug. 2, the series will end with the 1980s with drinks from Duane Sylvestre of Bourbon Steak and Megan Coyle of Hank’s Oyster Bar; and food by Sam Adkins of Sally’s Middle Name.

The new menu highlights traditional cooking techniques with modern dishes reflecting the current culinary happenings in Old Havana. Guests can also savor three new variations of the classic Rum & Coke, which is said to have originated in Cuba during the Spanish-American War.

Summer additions to Cuba Libre’s unlimited tapas brunch, which is served from 11:30 a.m.-3 p.m. Saturdays and Sundays for $28 per person, include huevo roto, the Cuban version of poutine made with house-cut double blanched French fries, crispy Spanish chorizo, poached egg and a tomato hollandaise drizzle and the hibiscus-blood orange-mango agua fresca with hibiscus flower infused blood orange, mango juice and mango chunks served by the glass for $5.50 or by the pitcher for $20. 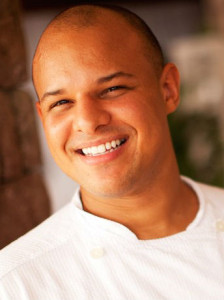 Dearden’s restaurant experiences have taken him from Florida to St. Lucia and New York. His culinary path includes staging at Michelin-starred restaurants including Alinea Restaurant in Chicago, Nobu Miami Beach and Cakebread Cellars in Napa Valley. Dearden worked as a sous chef for James Beard award-winning Chef Allen Susser at Chef Allen’s in Aventura, Fla., moving up to chef de cuisine. He then moved to Susser’s Jade Mountain Resort and Anse Chastanet in St. Lucia in 2008, eventually becoming the multi-unit executive chef responsible for three kitchens and six restaurant concepts.

Most recently, he was executive chef at Andre Balazs’ Sunset Beach in Shelter Island, N.Y., since 2014.