How to Go on a Digital First Date

It was a Friday night in the Bay Area, and Daniel, 25, was preparing for a first date. He fixed his hair in the mirror, put on his favorite dress shirt, made his bed (you never know) and sprayed a new cologne to set the mood. Daniel, who, like others in this story, asked to only be identified by his first name, grabbed his glass of wine and placed it next to the laptop on his bedroom desk. Then he took a seat, opened up Zoom — an app more commonly used for workplace videoconferencing — and a few seconds later, his Hinge match appeared onscreen. It was immediately clear that he and his date were not on the same page: she was in her pajamas. 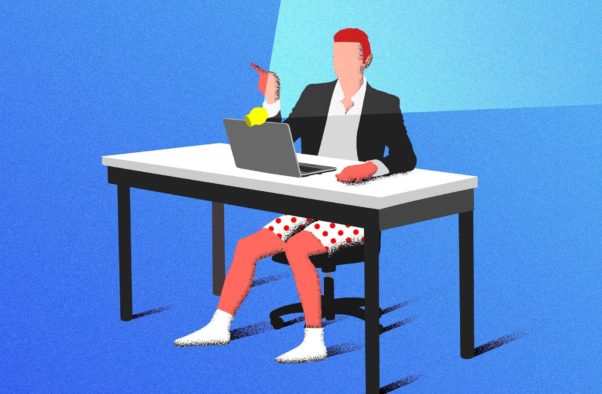 Single folks in the U.S. who had been chatting on dating apps, can not ignore the coronavirus crisis. With bars, restaurants and music venues closed, brave pioneers who don’t want to give up on dating entirely are having virtual meetups on video chat apps.
(Graphic: Getty Images)

Recently, single folks in the United States who had been chatting on dating apps and laying the groundwork for in-person first dates could no longer ignore the specter of the coronavirus crisis. And as the CDC issued instructions to begin social distancing, typical first-date haunts — bars, restaurants, music venues — became no-go zones for non-idiots. The alternative solution was imperfect but inevitable, really: Brave pioneers who didn’t want to give up on dating entirely pivoted to virtual meetups on video chat apps like Zoom, FaceTime and Skype.

In Brooklyn, 27-year-old Judy Kwon spent a few days messaging a male suitor on a dating app. They scheduled a date to cook dinner together, which became unfeasible as COVID-19 morphed into a national emergency. Their initial video call was on Saturday; it was short, and leaned heavily on making funny faces to fill space. Then they talked again on Sunday. And again, for even longer, on Monday. On Tuesday night, they cooked separate meals, then FaceTimed while they ate dinner.

Judy admits it is stressful not knowing when she will actually be able to meet a person whose virtual company has been a welcome respite. “There are obviously a lot of drawbacks to this, but at least for me, this [scenario] has prompted more serious conversations,” she said. “I’ve been vocal about how I feel, and I’ve asked him to do the same, because we can’t read each other the same way you would when you’re getting to know someone in-person. It’s made us more in touch with our feelings, for sure.”

In Denver, Zack Newman, a journalist who is under self-quarantine after interacting with someone who tested positive for COVID-19, matched with a woman on Coffee Meets Bagel last week, and they texted each other increasingly long messages. On Monday, they decided to attempt a FaceTime date.

“This felt like a natural next step to keep the conversation going, and to keep my own optimism up,” he said. “In these times, continuing to date in some capacity is a really hopeful act. That would assume there’s a dating future worth pursuing, and I think there is. I’m trying to embody that as much as I can.”

Zack carried out his usual pre-date routine: A workout, a shower and some date-worthy clothes, which he changed out of immediately afterwards. “You’re still making a first impression, and there was some comfort in that ritual,” he said. Daniel, who encountered the date in pajamas, says he put on a dress shirt and spritzed some cologne for the same reason — the ritual provided a sense of normalcy.

Zack and Daniel both went into their respective dates with some ice-breakers in mind. Basically, anything to distract from the pandemic. “It would be weird to not talk about it,” Zack said, “but I found that making a point of discussing other subjects was really helpful.” Daniel and his date swapped their respective lists of special talents, and she mentioned that she played the ukulele, which ultimately resulted in an impromptu karaoke session.

In Lincoln, Neb., 27-year-old Charlotte matched with a cute guy on Tinder. A few days later, Charlotte was a couple drinks deep after a Zoom happy hour of sorts with friends. She decided to shoot her shot by sending her Tinder match a Zoom invite. He accepted. The two ended up talking for 45 minutes, only ending when his phone died. “On the whole, our conversation flowed the same way it normally would in-person,” she said. “I made fun of him for drinking Busch Light. But at least we didn’t have to worry about who paid for what.”

Since their spontaneous Zoom date, they really wanted to meet in-person, so they have been going on long walks together — while maintaining their six feet of CDC-recommended distance. “It’s wild to date when you know there’s not going to be a goodnight kiss or even a hug, and no one is going to anyone’s house,” Charlotte said. “It’s a very different kind of dating. We’re both trying to escalate the relationship as you normally would, just during a pandemic.” 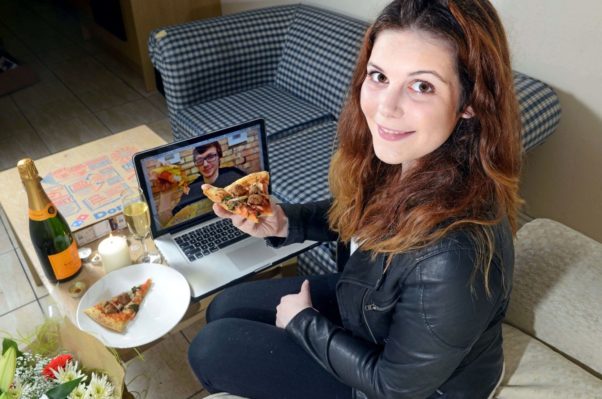 Establish a vibe before your virtual date. Do you want to eat dinner together? Drink together? Watch a TV show together?
(Photo: Press Eye)

Charlotte’s distanced date walks serve as a reminder that it is impossible to fully disconnect from the grim mood of the present moment. For some digital daters, the reality of the pandemic is even more anxiety-inducing. Austin, who asked to use an alias, experienced this first hand after trying a FaceTime date with a Bumble match. After talking for a bit, the Bumble match burst into tears. Turns out, someone they had repeatedly interacted with in recent days has a fever, and no one in their orbit knows what to do. The two ended up talking for quite a while, and made plans to catch up again soon. Whether their next hang is a second date or just a check-in remains unclear, but that isn’t really the point for Austin. “On a human level, we have to be there for one another,” he said.

But not every digital first date packs the emotional punch of a rom-com meet-cute. Afsana Ahmed, 22, has been stuck in Queens, passing the time sifting through grad school materials that hardly seemed to matter given the chaos around her. She downloaded Hinge out of boredom, and started messaging every man she matched with who claimed to be over six feet tall, asking if they wanted to Skype. Finally, a suitor said yes.

She scrambled to get ready, putting on makeup and a cute top paired with pajama bottoms and positioning her laptop in front of her bookshelf, which she wanted to show off. She and her date, a man who works in finance and lives alone in Manhattan, agreed to video chat over dinner. She made pasta but he, as it turns out, hasn’t gotten groceries in a while. His meal? A Red Bull. “He told me he put on a clean T-shirt for this,” she says. “I was like, ‘Thanks.’”

Afsana tried to press forward with normal first-date pleasantries. The moment a pause arrived, he made clear what he really wanted out of the encounter. “He was like, ‘Since we’re in quarantine, can I see your boobs?’ I said no, and he was like, ‘Oh okay, sorry,’” she said. “I wasn’t even upset. I thought, okay, this man has been stuck in his apartment drinking Red Bull for three days. He’s probably not well.”

Despite the rocky start, Afsana is still aiming for “some When Harry Met Sally-type shit” during the COVID-19 outbreak. She has planned additional video chats with hopefully more put-together men. “If we can make it through the pandemic over FaceTime, maybe we can make it in real life.”

If you should feel inclined to schedule a Zoom date yourself, the digital first-daters recommend sticking with a computer rather than a phone. The only dissenter on the subject was Zack Newman, the journalist, who works with cameras and frames lots of his interviews. “I was worried that if I used my laptop, it would be at a lower angle, and that would get some double-chin action,” he said.

Also: There is no need to overdress, but put some effort in, at least above the waist — out-of-sight sweatpants are totally acceptable. Choose a backdrop that shows off your interests or apartment aesthetic, and, yes, you should clean up. Establish a vibe beforehand: Do you want to eat dinner together? Drink together? Watch a TV show together? And Afsana has another humble request: “Please make sure you have good WiFi. Ultimately, I could never be with someone who doesn’t have really good WiFi.”

For singles, this time of social distancing, weirdly enough, offers all the makings of the kind of meet-cute that rom-coms are made of, with lengthy conversations and intense longing. On one hand, it is impossible to ignore the heavy fact that digital first dates exist specifically because we are all living through a pandemic. On the other hand, that very heaviness can inspire more candid conversations and ultimately, an even deeper bond. Regardless, virtual dates present an opportunity to connect with someone, and for a brief period, provide them with a meaningful distraction. Given the circumstances, distraction is a legitimately powerful weapon to pit against loneliness and despair.

And some optimistic digital daters, like 36-year-old Brauck Cullen from San Antonio, are already planning ahead and anticipating their distant-future in-person introductions. Brauck and a Hinge match tried the FaceTime route and had a genuinely vulnerable hour-and-a-half conversation over drinks. They even managed to largely ignore coronavirus topics. “We did feel that there was chemistry,” he sair. “We texted a little bit afterward — it’s kind of fun to have a little sexual tension for when we do get to meet someday.”