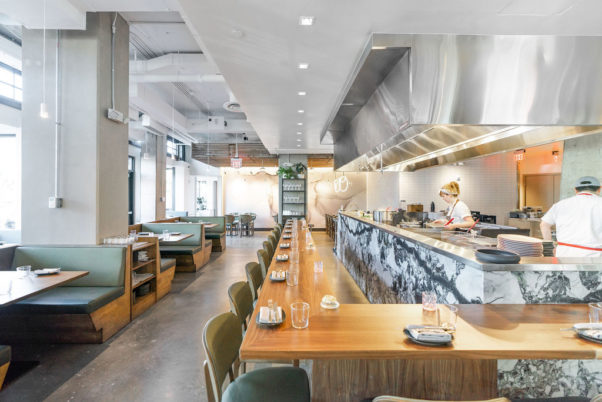 Emilie’s, which has seating for 110 including at a chef’s counter, features an open kitchen. (Photo: Anne Kim)

“I’m really looking forward to creating an experience for our guests which fosters a sense of community,” Tien said in a statement. “With the open-kitchen layout, which extends across the main dining room, we want our guests to feel like they are sitting cozy in their own kitchen as we cook for them.”

The 5,175-square-foot restaurant, which is in the Penn Eleven building on the former site of the Frager’s Hardware, features a 48-seat lounge area with bar, a 110-seat main dining room, including a 10-seat communal table and a chef’s counter. A private dining room has its own bar. An 80-seat patio will open later. 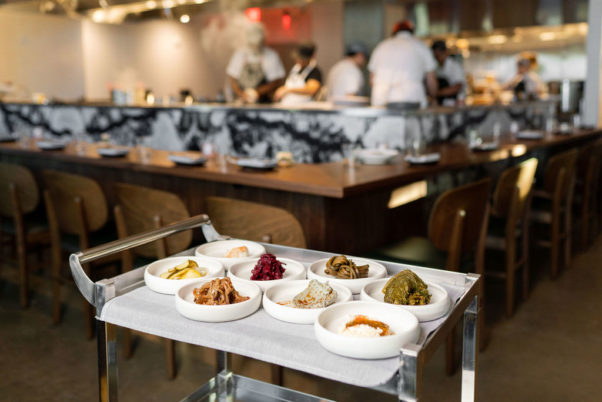 The interior, which was designed by HapstakDemetriou+, has cement floors and columns, white and gray subway tiles on the walls, marble and wood counters and bars, wooden tables and chairs with olive green leather seats, and gray and olive banquettes.

Originally from Lafayette, La., Tien started working in the corporate world. However, he had a career change in 2009. After working with various restaurants in Louisiana, Texas and the District, including Pineapple and Pearl, Momofuku CCDC, Oyamel and Uchi, he opened Himitsu

At the tiny 24-seat Himitsu, which was renamed Pom Pom after he left, Tien drew national accolates for his food that fused Vietnamese, Japanese, Latin American and Southern tradition: Bon Appetit named Himitsu one of the best new restaurants in the country in 2018; he was a James Beard finalist for Rising Star Chef of the Year in 2018 and a semi-finalist in 2017; Food & Wine named him to its Best New Chef’s list last year; and he competed on Iron Chef Gauntlet in season 2. Oh, he was also was named a People magazine “Sexiest Chef Alive” finalist last year, but that wasn’t based on his cooking.

Emilie’s will continue Himitsu’s hodgepodge menu with chefs who have worked at Pineapples and Pearls, Rose’s Luxury, Tail Up Goat and Himitsu. The “new American” cuisine at Emilie’s focuses on seasonal and local ingredients and features large, family-style plates and smaller a la carte dishes. In addition, carts that circulate the dining room will offer dips and spreads, pickles and fermented vegetables, and desserts. 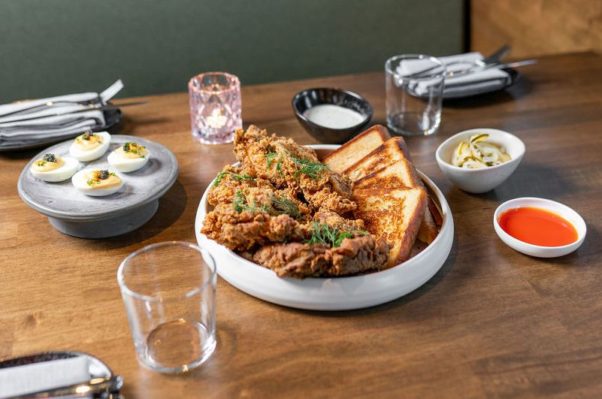 Among Emilie’s large plates that are meant to be shared is ranch fried chicken. (Photo: Anne Kim)

Three large-format dishes lead the menu: whole branzino with ginger scallion served with white rice, maitake mushrooms, a side of greens and agedashi for dipping; a 32-ounce Vietnamese-style pork blade steak served with woven rice vermicelli, nouc cham lettuce wraps, and peanut sauce; and ranch fried chicken that is brined in a buttermilk solution with herbs then coated in ranch spices. It is served with a side of ranch, hot sauce, bread and butter zucchini pickles, deviled eggs with caviar and Texas Toast. All three are priced at $45. 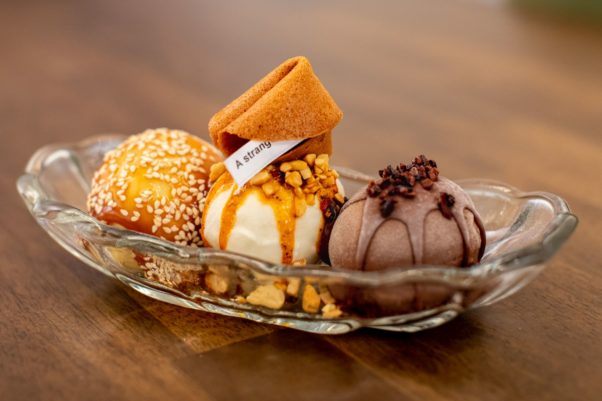 Desserts include the mala sundae that has savory components to it. (Photo: Anne Kim)

Desserts from the cart, including delicata squash cake, pandan custard and cookies and milk range from $6-$8, while made-to-order desserts like donuts with concord jam and rosemary, a mala sundae with honey custard, Sichuan chocolate, condensed milk and chili crunch or Nordic gjetost cheese molten cake with apples, pecan and crème fraiche are $8-$14.

Emilie’s is open from 5-10 p.m. Tuesday through Thursday and 5-11 p.m. Friday and Saturday. Lunch and brunch will be added at a later date.