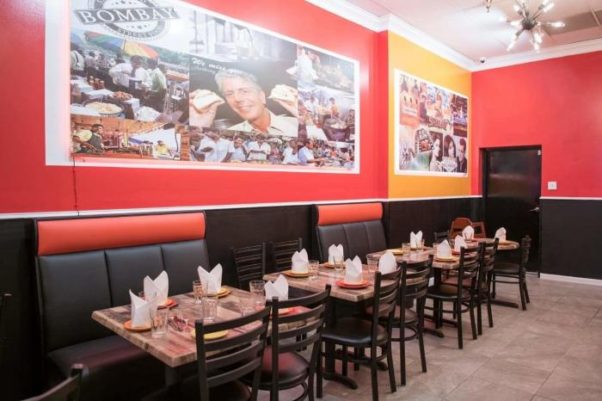 The colorful walls at the 65-seat restaurant with a private dining room and patio depict Bombay landmarks, Bollywood stars, Gandhi and the Indian flag. A photograph of Anthony Bourdain with the Bombay burger honors the late chef’s journey to India.

To prepare to open the restaurant that pays homage to Indian street vendors, Sheikh revisited Bombay (now Mumbai) with partners and chefs Pradip Shrestha and Dolly Khan. For 10 days, they ate from the same stalls and street vendors he ate at during his childhood.

Among the dishes Sheikh has on his new menu is Indo-Chinese chili chicken in a spicy tomato sauce with curry leaves. The restaurant will also serve a vindaloo, the hottest dish on the menu. And he isn’t holding back on the spices that are imported directly from couriers in India, who dry the seeds in the sun grinding them into a powder. 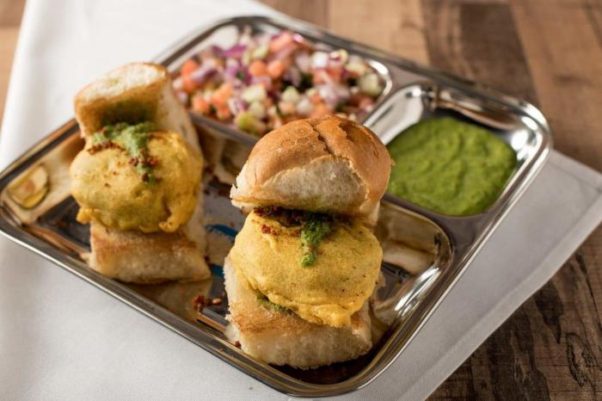 Other dishes on the menu include vada pav, dubbed the “Bombay burger.” Sold in the city’s railroad stations and bus stops, it is a mashed potato patty topped with cilantro-ginger chutney. The menu also includes a section called Monsoon that features comfort dishes like vegetable fritters, deep fried paneer cheese and chicken masala paired with hot “cutting chai” (a half glass of tea).

Bombay Street Food is open from lunch from noon-3 p.m. daily and for dinner from 5-10 p.m. Sunday through Thursday and 5-10:30 Friday and Saturday.

The Delegate opens in Shaw hotel 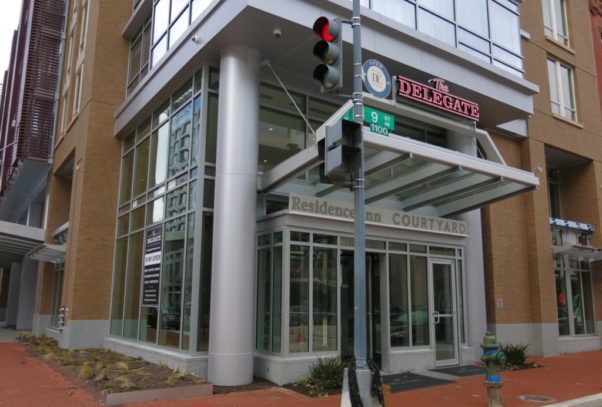 The Delegate opened near the convention center recently in the co-branded Courtyard and Residence Inn Washington Downtown/Convention Center by Marriott. (Photo: PoPville)

The 200-seat restaurant includes a full-service 40-seat bar with exposed brick, a 3-inch-thick glass top and an abstract sculpture overhead that offers local spirits and brews, a 50-bottle wine list and creative twists on classic cocktails. The bar also offers a weekday happy hour from 3-7 p.m. with specially priced domestic beers, wine and bar bites. A roof-top lounge will be open April through October.

The restaurant serves new American cuisine with a modern twist for breakfast, lunch and dinner. Dishes include appetizers like black sesame ahi tuna or fried green tomatoes with Firefly goat cheese and jalapeno fig jam; sandwiches such as the namesake Delegate Burger; and entrées from land and sea like beef short ribs with sweet potato puree and green beans, and wild salmon with succotash and crispy lemon pepper chives.

On weekends, the restaurant will serve a chef’s table brunch menu with classics like bacon and eggs, French toast and berries, and biscuits and gravy, as well as warm skillet cinnamon buns, a carving station featuring Cajun turkey, beef brisket and smoked pork belly with chipotle BBQ and a create-your-own omelet station. 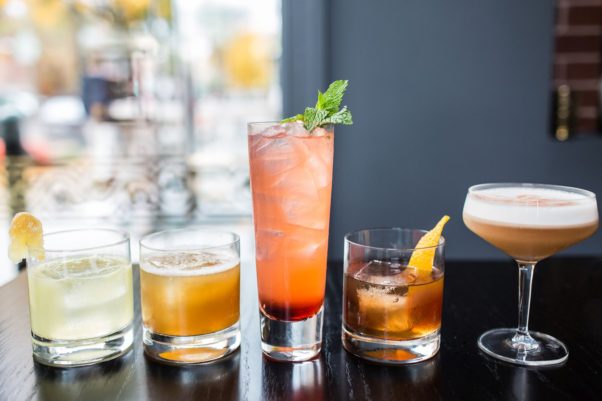 New to the restaurant’s drink menu are the Masala Sour made with vodka, house-made masala chai, lemon and egg white; Smoke & Agni (fire in Sanskrit) with apple brandy made in the style of mezcal from Baltimore Spirit Co., honey, fresh ginger and lemon; Four Corners with tequila and house-made strawberry Thai chili shrub with elderflower and lime; and the Sweet By and By with rye, house-made mango chutney, allspice dram, Cocchi Dopo Teatro and bitters. All four are priced at $12 each.

StarChefs to give D.C.-Chesapeake Rising Star Awards on Tuesday

StarChefs will present the 2018 D.C.–Chesapeake Rising Star Awards to the recipients at on Tuesday, Dec.11 at Union Market’s Dock 5, 1309 Fifth St. SE. A reception will begin at 5:45PM for $150 per person, followed by the awards ceremony at 6:30 p.m. and the tasting gala from 7-9 p.m. for $95 per person, which will showcase 18 signature savory dishes, desserts, wine pairings and cocktails, prepared by the 2018 Rising Stars. Tickets can be purchased online. 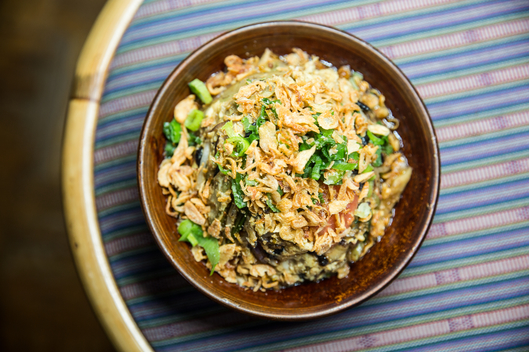 Now in its 16th year, the Rising Star Awards announcements are the culmination of research, which was conducted throughout the greater D.C.–Chesapeake region in the past year: in searching for the finest, up-and-coming talents in their field from Richmond to Baltimore, Rehoboth to Frederick and throughout Washington, D.C.

The Rising Star Award winners are the magazine’s picks for up-and-coming chefs and culinary professionals who have less than 10 years of experience and are under 40 years old. Local winning chefs include Drew Adams, Bourbon Steak; Tom Cunanan, Bad Saint; Brad Deboy, Ellē;, Jerome Grant, Sweet Home Café at the National Museum of African American History and Culture; Kwame Onwuachi, Kith and Kin; and Kevin Tien, Himitsu. Opie Crooks of A Rake’s Progress will be honored as the top hotel chef. Charbel Abrache of Seylou Bakery is one of the two top pastry chefs. Baker Jonathan Bethony of Seylou Bakery and coffee roaster Evan Howe of Small Planes Coffee are the award-winning Artisans.

The team behind Call Your Mother Deli, restaurateurs Chris Brady and Andrew Dana, and chef Daniela Moreira, together, are honored for concept. Erik Bruner-Yang is named the area’s leading restauranteur for Foreign National. And Felicia Colbert of A Rake’s Progress and Darlin Kulla of Succotash] are named the premier sommeliers.

Throughout the night, StarChefs will also announce the winners of the art of presentation, mentor, game changer and best dish awards. 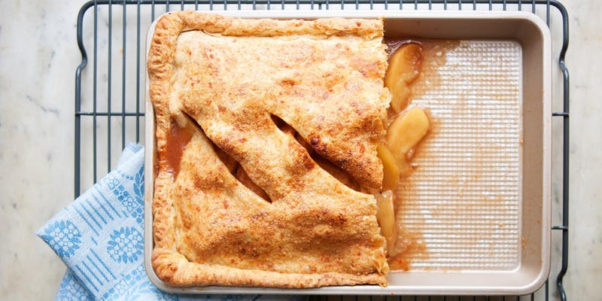 Instead of meticulously rolling out a round crust, slab pies offer an unfussy twist on the classic confection. Baked in quarter sheet pans, and made to serve 8-16 guests, slab pies easily provide a delectable dinner or dessert for a crowd.

Buttercream owners Tiffany MacIsaac and Alex Mudry-Till will bring the pages of the cookbook to life with savory slices of kale mushroom pie and sweet slices of grand mocha pie, which will be for sale at the bakeshop while guests gather and mingle with the author.

The book signing is open to the public.

Chef Robert Curtis in at Hazel 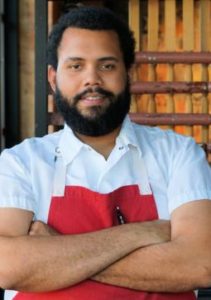 Curtis was born in Philadelphia, grew up in Bethesda and attended Johnson & Wales University in Charlotte, N.C. After graduating in 2009, he moved back to the DMV, where he worked at Brabo and Restaurant Eve in Alexandria and Michael Mina’s Bourbon Steak at the Four Seasons Hotel in Georgetown, before moving to San Francisco three years ago to Mina’s RN74. When RN74 closed in October 2017, Curtis returned east after visiting his fiancé in Turkey then Copenhagen this past March through May to apprentice at the new incarnation of Noma.

Curtis also offers a trio of large format dishes for three to four guests including Rohan duck brined in cardamom and coffee, which is then dry-aged and pan-roasted served with braised lentils and roasted curried carrots.

Gnocchi and foie gras mousse, both dishes Rubba was known for, are on the menu, but with a completely different spin