Disgraced chef Mike Isabella should just throw in the towel as his empire continues to crumble following a sexual harassment lawsuit by former employee Chloe Caras that he settled in federal court last May. 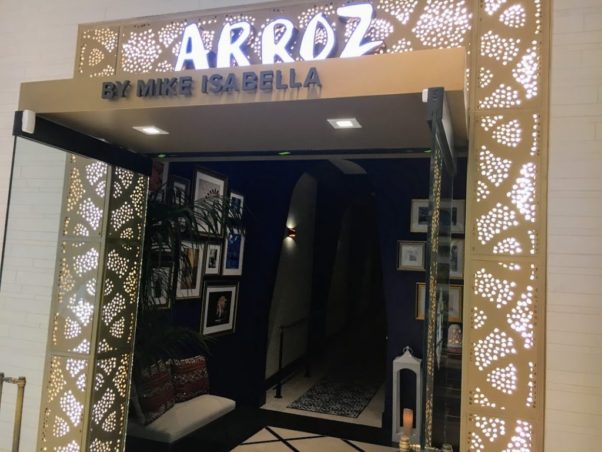 Arroz in the Marriott Marquis could be one of Mike Isabella’s next restaurants to close because of unpaid rent. (Photo: Rich chessen)

First he lost several partners including his long-time public relations firm. Then his first restaurant, Graffiato in Chinatown, closed along with Requin Brasserie in Fairfax, Graffiato Richmond and Isabella Eatery in Tysons Corner – all for not paying rent. His company was forced to file Chapter 11 bankruptcy in September after being sued by several landlords for back rent.

To raise funds, he had to sell his 2,000-square-foot Wharf condo in the luxe Vio building for sale for $2.7 million.

To add insult to injury, his business partners – who were also listed in the sexual harassment lawsuit – issued a statement indicating that Isabella would be stepping away from the company, although he denied it through his new spokesman.

On Saturday, Kapnos Taverna at the Hotel at the University of Maryland, 7777 Baltimore Ave., College Park, closed. As part of his bankruptcy restructuring, he had to surrender the space to the landlord, Southern Management, which had sued for back rent.

Now we learn that both Arroz, 901 Massachusetts Ave. NW, in the Marriott Marquis across from the convention center and the original Kapnos, 2201 14th St. NW, have also been sue by their landlords for back rent.

Quadrangle Development, Arroz’s landlord, filed a motion in early November to compel the restaurant to pay more than $36,000 in rend owed for November. The judge ordered Arroz to make the payment by Dec. 1 or the could would hold another hearing. The order also allowed Quadrangle to seek a new tenant for the space provided there is not public advertisement of the space being leased.

And Simpson Property Group LP, the landlord for Kapnos at 14th and W Streets NW, filed its own motion to compel payment of rent last Tuesday, claiming more than $38,000 it is owned in November rent and utilities. The motion also asked the court to order the restaurant to pay its December rent in a “timely” manner. 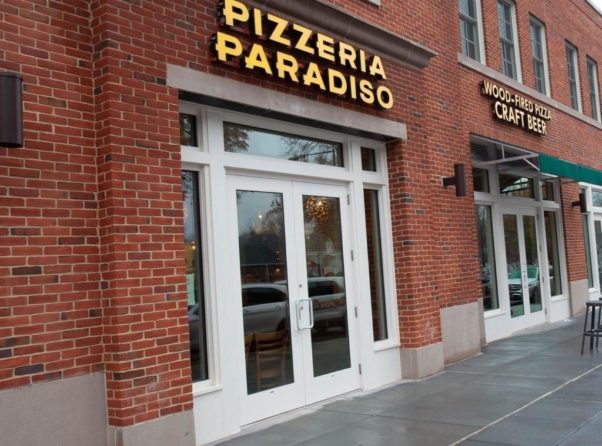 Eric Gronning of Gronning Architects designed the 179-seat restaurant including the largest outdoor space of all the pizzeria’s locations. The new location features two pinball machines, Pirates of the Caribbean and the Simpsons, and two video games. A custom mural by artist and Stillwater Brewery label designer Mike Van Hall along with pizza art from the children at partner, ArtWorksNow, adorn the walls. There is an outdoor draft rail for the 60-seat patio, where guests can enjoy local brews in the warmer months.

The new location boasts a D.C.-centric beer and cider list. It opened with 14 rotating taps and a wide selection of bottled beers. Two selections each from six D.C. breweries will be featured alongside a cider from each of the District’s two cideries. The offerings include Brau Pils and Sugar Leaf Hazy IPA from D.C. Brau, Barch 500 and Lovely Nomad from Atlas Brew Works, Corn Rigs and Barley and Raised by Wolves from Right Proper Brewing, Farmhouse Saison and Ruby, My Dear from Mad Fox Brewing, Southern Belle and ‘Bout That Life from 3 Stars Brewing and Red Line and Double Chazzwazzer from Hellbender Brewing. Available ciders include Greening from ANXO and Touch of Wisdom from Supreme Core.

Pizzeria Paradiso favorites like the margherita and quattro formaggi are staples on the menu, in addition to some of the more unique offerings such as the Atomica made with Paradiso tomato sauce, salami, kalamata olives, hot pepper flakes and mozzarella; the Di Mare topped with spicy garlic pesto, mussels, shrimp, spinach, red onions, and grana Padano; or the Paesana made with spicy garlic pesto, house-made chicken sausage, sweet red peppers, roasted escarole, broccoli rabe, mozzarella and ricotta. Pizzas are $12-$15 for a 9-inch and $18-$21 for a 12-inch.

In 1998, Ashok Bajaj of Knightsbridge Restaurant Group opened his first Washington restaurant upon his arriving in the city, The Bombay Club, 815 Connecticut Ave. NW. This December marks The restaurant’s 30th birthday. 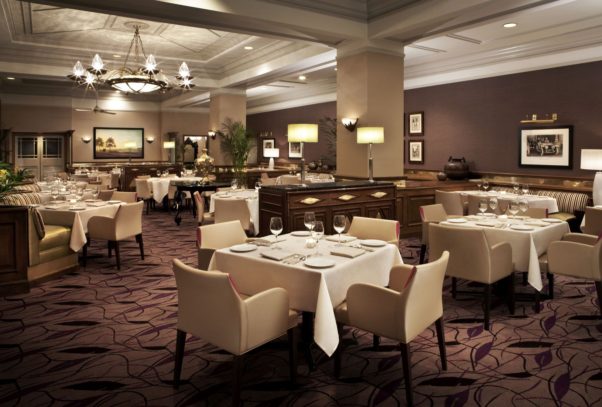 Bajaj had to convince the landlord that the nation’s capital was ready for a fine dining Indian restaurant three decades ago, and today it is still considered one of the city’s best establishments.

A complimentary glass of champagne will be presented to all guests who dine at the restaurant during the month of December. Also, for its diamond anniversary celebration, it will feature a $65 four-course, prix fixe menu featuring a selection of classic Indian dishes during the entire month. These dishes have rotated on and off the restaurant’s menu since its opening, due to their popularity and requests by guests.

The anniversary menu will be available exclusively during dinner service and begins with an amuse of truffle rasam followed by squash plti samosa; bhalla papdi chat and mushroom galouti. Next, diners can opt for the dum ka lobster with almond, saffron, mace, cardamom and silver leaf; or palak paneer tikka with shitake, cumin, mint, yogurt and tomato before selecting a main course from options such as kundan kaliya, a lamb chop with almond and nutmeg gold leaf; or chicken firdausi with pomegranate, tomato, fenugreek and garam masala served with yakhni pulao and sheermal; squash musallam with onion, yogurt, cashew and saffron; kargisi kofta with sweet potato, cheese, spinach, cumin served with guchhi chigoza pulao and sheermal; or the vegetarian thali with zafrani paneer, dum ki gobi, bharwan aloo, khumbh palak and dal makhni served with guchhi chigoza pulao and sheermal. For dessert, diners will enjoy a dessert sampler of chocolate malpua; kesar pista kulfi and anjeer halwa.

It menu begins with a platter of hummus tahina, served with pita followed by a choice of Israeli salad waith cucumber, tomato, onion and picked Sharon fruit or potato latkes with hawaij-spiced apples. Next, diners can select from one of the featured entrées: schmaltz braised lamb shoulder served with roasted carrots and chickpeas; roasted beef brisket with caramelized onions and shishito peppers; or charred vegetable couscous with harissa and garlic labneh. To complete the meal, dessert includes apricot konafi bars with shredded filo and apricot labneh filling.

The Hanukkah feast is $35 per person. Orders must be placed 24-hours in advance of pick-up, with pick-up times available from 1-6 p.m.

Those who wish to dine at the restaurant this holiday will find a variety of specials from 5-10 p.m. Sunday through Thursday and 5-11 p.m. Friday and Saturday, which will be available in addition to the restaurant’s full a la carte dinner menu. Specials include potato latke with hawaij-spiced apples priced at $10; sweet potato with carrots, dates and pecan tzimmes priced at $10; fire roasted Jerusalem artichokes with preserved lemon and herb tahina priced at $10; roasted beef brisket with caramelized onion and shishito peppers priced at $23; and schmaltz braised lamb shoulder with roasted Sharon fruit, carrots and chickpeas priced at $24. 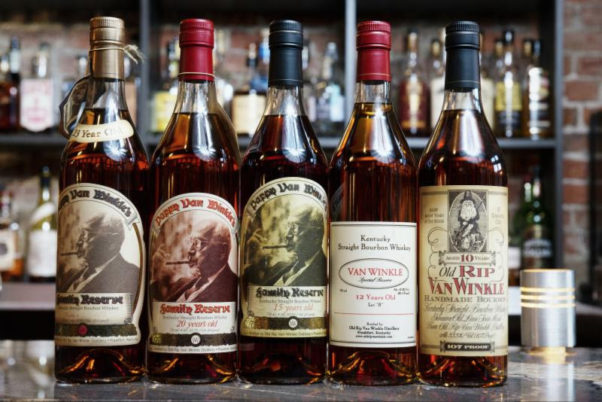 The restaurant and bar will celebrate the repeal of the 18th Amendment prohibiting alcohol with Prohibition-era cocktails and punches, a special basement speakeasy, a Pappy Van Winkle happy hour, complimentary champagne, burlesque performances and more.

The basement’s whiskey cellar will convert into a 30s-style speakeasy complete with Prohibition-era bourbons, rye whiskeys and other vintage spirits. Old-time jazz tunes will transport guests to the era, along with classic vintage cocktails for $10.

The Saloon will also pour bottomless bubbles for $20 all night, plus cocktails harkening back to the era, like the Creole Cocktail with Bulleit Rye, Dolin Rouge sweet vermouth, Benedictine and Angostura bitters, and the Astoria with Nolet Gin, Dolin Blanc vermouth and orange bitters. A model wearing a Champagne glass-adorned dress will roam the building, passing out complimentary Moët Hennessy to guests, burlesque dancers will perform for spectators throughout the evening, and cigarette girls will offer a selection of specially priced cigars.

Guests are encouraged to dress to the nines in flapper dresses and swanky suits, donning their most Prohibition-era attire, for a chance to win a $150 gift certificate. 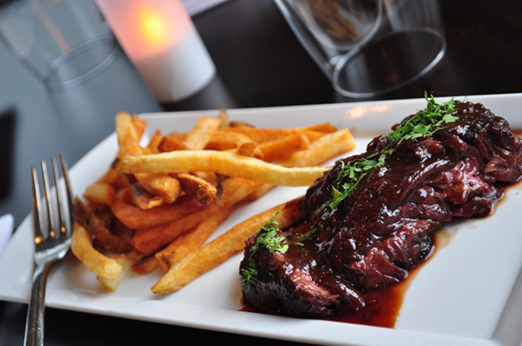 From La Vie En Rose to Fly Me to the Moon to Nuages, clarinetist and saxophonist Nathalie Braux plays American, French and Franco-American selections during dinner.

Also on Wednesdays the bar and café features $12 steak frites, $8 royale burgers and $6 moules, and happy hour is served until 9 p.m. 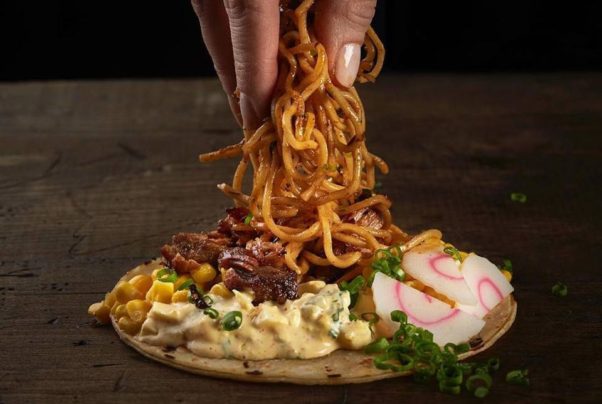 Taco Bamba’s fifth location opens Friday in the University Mall across from George Mason University. Among its new tacos is the Robinson Ramen. (Photo: Taco Bamba)

The 1,300-square-foot restaurant will feature a menu that includes a familiar selection of traditional tacos and tostadas along with original creations unique to the neighborhood.

Any of the traditional taco fillings, like chicken tinga, carne asada and al pastor, can also be ordered as a sope or quesadilla. Order your taco “dirty-style” to get an added topping of cheese and sweet chili sauce, which are seared together with the meat on the plancha grill and served in a flour tortilla. Other less traditional highlights include the Papi John, a quesadilla stuffed with pepperoni, chorizo, Chihuahua cheese, peppers, onions and salsa roja.

The laid-back beverage program features two draft beers and a small menu of cans and bottles. Three house-made margaritas will also be available, one on draft and two frozen.

Grupo7 designed the interior, which extends the red, black, grey and natural wood colors of other Taco Bambas. The restaurant seats 26, and there is standing room and counter space.

Bamba Fairfax will be open for from 8:30 a.m.-10 p.m. for breakfast, lunch and dinner seven days a week.