First, disgraced chef Mike Isabella was sued for sexual harassment in federal court by former employee Chloe Caras. He settled that lawsuit out of court last May. Then his first restaurant, Graffiato in Chinatown, closed along with Requin Brasserie in Fairfax, Graffiato Richmond and Isabella Eatery in Tysons Corner. Finally, his company filed Chapter 11 bankruptcy in September after being sued by several landlords for back rent. 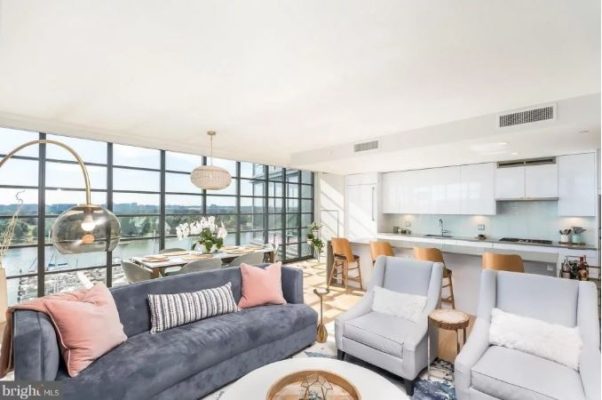 Mike Isabella’s three-bedroom, 2,000-square-foot condo at the Wharf is for sale for $2.5 million. (Photo: MLS)

Now comes word that Isabella has listed his 2,000-square-foot Wharf condo for sale for $2.5 million.

The three-bedroom waterfront condo is in the Wharf’s luxe Vio building, a quick walk from his Requin Wharf restaurant, which has so far managed to stay afloat. He paid $2,191,400 for the unit in March. Jordan Stuart, executive director of the Keller Williams Capital Properties sports and entertainment division, is the listing agent.

To add insult to injury, last week four of his business partners – who were also listed in the sexual harassment lawsuit – issued a statement through their lawyer, Demetry Pikrallidas, indicating that Isabella would be stepping away from the company

“As MIC Concepts works through its restructuring, Mike Isabella will be stepping aside to allow George Pagonis to provide the culinary vision of the organization,” Pikrallidas said in the statement. “Negotiations continue regarding the final structure of the enterprise moving forward.”

But Isabella’s spokeswoman, Kate Wilhelm, who he has since fired, said it wasn’t true. She said no official shifts in leadership have been made or approved by the bankruptcy court.

“No one’s role in the company has changed at this point,” Wilhelm told Washingtonian magazine. “Mike is at the helm, and George remains his solid partner.”

But, Wilhem said, it is a possibility that Pagonis will take the lead. “It was always Mike’s vision to one day hand the company off to George. They’ve always had a great mentor/mentee relationship. He thinks George is a great young chef, and when the time is right, he has what it takes to run the company going forward with his own culinary vision.”

She added that no timeline for the transition. “It was just when it was right for him [Isabella] personally, and George professionally.” But, she added, “it’s been accelerated.”

Then last Friday, Isabella issues his own statement through new spokesman, Edward Segal, objecting to his partners’ statement that he is stepping aside.

“I have not made any decisions about my role with or the leadership, operations, or future of my restaurants,” he said. “Anyone who says or speculates otherwise or claims to know my thinking about these important matters is wrong. I will make an announcement at the appropriate time about my decisions and plans.”

Pagonis grew up working at his father’s Greek diner in Alexandria and first started cooking under Isabella when he was the executive chef at Zaytinya. When Isabella opened Graffiato in 2011, Pagonis joined his as chef de cuisine. As Isabella’s company expanded, Pagonis opened and helmed four stand-alone Kapnos locations in D.C., Arlington, Bethesda and College Park, plus spinoffs in Nationals Park (which severed ties with Isabella after the lawsuit), Reagan Airport the now shuttered Isabella Eatery.

While the partners publicly projected a united front, denying they created a hostile work environment, others said they fought behind the scenes.

Former employees report that Pagonis and his brother, Nick, stopped speaking to Isabella. They blamed Isabella because he was the one who fired Caras, a former employee said. And Isabella blames them because they sent the text messages to Caras that got referenced in the lawsuit.

“I can’t step down from the company. I am the company,” Isabella told the magazine. “If I step away the company closes down.”

Bourbon Steak in the Four Seasons Hotel, 2800 Pennsylvania Ave. NW, has transformed its patio into a twinkling winter wonderland – Bourbon on Ice. It will feature three, ice domes each mirroring a Nordic-style bungalow, available to reserve for dining or gathering for cocktails. 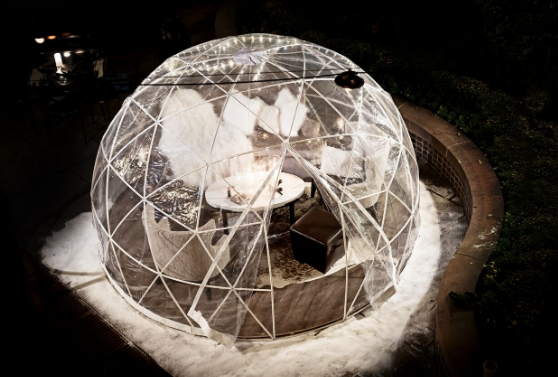 Diners can relax, unwind and uncork underneath glimmering bistro bulbs in the outdoor patio and cozy up by the blazing fire pits with the plush, furry blankets and rugs. Friends can meet and mingle with glow-in-the dark lawn games, enjoy selections from a rotation of premium cigars or celebrate with a bottle of bubbly from the wine list.

Each dome, which seats up to six, has its own unique décor and distinct theme and named for infamous bourbon producing cities: Louisville, Bardstown and Lexington. Guests can expect a special selection of spiked sips and warming boozy beverages. Craft cocktails include hot buttered rum served in a custom thermos. Fashioned to pair dishes, the tariflette is a potato gratin layered with bacon and melted Reblochon cheese. Sweets include a Baked Alaska, designed to resemble the winter domes in edible form.

The domes can be reserved daily from 11:30 a.m. until the last seating at 9 p.m. Dome rentals start at $150 per ice dome and include a $50 food and beverage minimum per person. 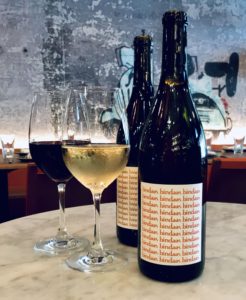 The wines were created to not overwhelm your palate and can be paired with many dishes. Cuvée Bindaas White is made with 40 percent sauvignon blanc, 40 percent chardonnay and 20 percent colombard. It is pale gold in color with flecks of green grass. Aromatically, it resembles dried Meyer lemon, pear, hazelnut and biscuit. On the palate, one tastes the Meyer lemon, green apple and a good dose of minerality.

Cuvée Bindaas Red blends 40 percent syrah, 25 percent zinfandel, 25 percent carignane and 10 percent cabernet franc. It is a dark ruby color, which is met with medium tannins and good acidity. On the nose it is red berry rhubarb, currant and stone, all which carry through to the taste. 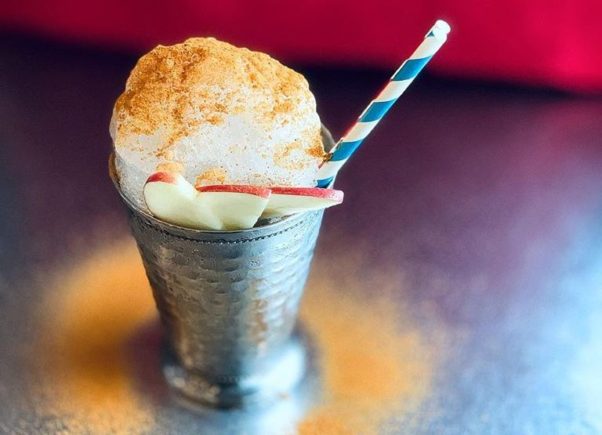 The Royal celebrates Veterans Day with its Royals Nights pop-up with Americana-inspired cocktails inclidng this Just Like Mom Used to Make. (Photo: The Royal)

The special menu will feature six Americana-inspired cocktails made with American-made spirits and seasonal ingredients priced at $9 each. One dollar from each cocktail will be donated to the Iraq and Afghanistan Veterans of America.

In addition, there will be $3 canned brews from Atlas Brew Works and handmade roasted chicken and vegetarian tamales for $10. 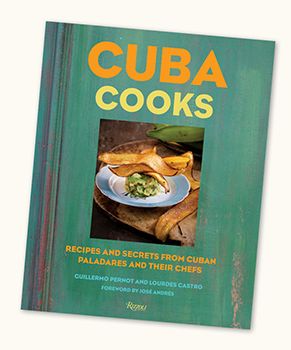 Cuba Libre Restaurant & Rum Bar, 801 Ninth St. NW, will celebrate the release of chef-partner Guillermo Pernot’s second cookbook, Cuba Cooks: Recipes and Secrets from Cuban Paladares and Their Chefs with a book signing party on from 6-8 p.m. on Tuesday, Nov. 13. The cost is $50 and includes select open bar including beer, red and white wine by the glass, house red and white sangria, pyrat mojitos, mango mojitos and spiced Cuba Libres along with passed and stationary tapas, ceviches and desserts profiled in Cuba Cooks. Cookbooks can be purchased for an additional $40 each.

The cookbook features a variety of dishes that have been adapted from some of the best private restaurants from Old Havana to Santiago de Cuba. Showcasing a cuisine that marries traditional foundations with modern influences, Pernot and co-author Lourdes Castro have collected recipes and stories that reveal a contemporary cuisine. Throughout the book, readers will find notes about Cuba’s culinary heritage, as well as helpful notes found with every recipe.

Tickets for the release party are available online.

Bastille, 606 N. Fayette St., Alexandria, will celebrate Beaujolais Noveau’s debut on Thursday, Nov. 15, by offering Domaine Foretal at $9 a glass and $29 per bottle, while supplies last.

Bastille celebrates the debut of the 2018 Beaujolais Nouveau with specials all week. (Photo: Bastille/Facebook)

All week long, from Nov. 12-18, the restaurant is celebrating French Restaurant Week with a three-course prix fixe lunch for $25 and a prix fixe dinner of French classics to for $35 to celebrate the uncorking of 2018 Beaujolais Noveau. Bastille’s regular menu will be available all week as well.

Plus, every Wednesday from 4 p.m.-closing, Bastille celebrates #HalfWaytoFriday with $12 steak frites; an $8 royale burger with cheese and $6 moules (add frites for $2) and happy hour until 9 p.m. 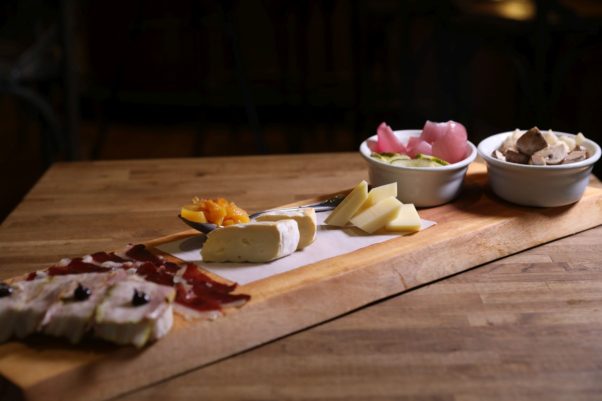 From Nov. 1-30 during dinner service, the restaurant is offering a three-course, prix fixe menu featuring classic French dishes for $40 per person. The menu begins with a choice of charcuterie tray or cervelle de canut with cream cheese, garlic and chives served with toasted bread, followed by an entrée choice of pressed chicken with arugula and dijon vinaigrette or salade Lyonnaise with frisée, confited pork belly and poached egg. For dessert, choose a chocolate tart served in an almond tart shell with espresso gelato; poached pears with red wine and vanilla ice cream; or classic crème brûlée with muscovado sugar.

Diners can pair their meal with a 750ml bottle of Paul Durdilly 2017 Beaujolais Les Grand Coassese priced at $30 or opt for the 750ml bottle of 2014 Mommessin, Moulin-a-Vent les Grandes Mises for $45.

The dinner costs $99 per person.