Ashok Bajaj, who owns Rasika, The Oval Room and others, bough the Restaurant Nora building for $4 million. He plans to open a new restaurant there next year. (Photo: David R.E. Hunt)

Bajaj bought the building at 2132 Florida Ave. NW for just more than $4 million, but did not buy the business. Instead, he plans to open a new concept there next year after giving the building a new look.

Nora Pouillon, a native of Austria, moved to Washington in the 1960s and opened a cooking school before opening Restaurant Nora in 1979. It became the country’s first certified organic restaurant in 1999. She decided to retire and put the business up for sale in 2016, asking $7 million for the building, business and the restaurant’s name. She said at the time that she hoped the buyer would maintain at least part of her restaurant’s ethos, although she also acknowledged it was unlikely it would retain the organic certification. She closed the restaurant in June 2017.

But Bajaj did not buy the business. The 7,000-square-foot space will have 100-seat dining room, private dining rooms that can seat 12 and 24, and a second-floor art gallery that will be open during the day and also serve as a private event space that can seat 45.

He hasn’t revealed the name of the new restaurant or what kind of food it will serve, but did say it will not be an offshoot of one of his existing concepts.

The TGI Fridays at 2100 Pennsylvania Ave. NW in Foggy Bottom – the city’s only TGI Fridays – has closed. 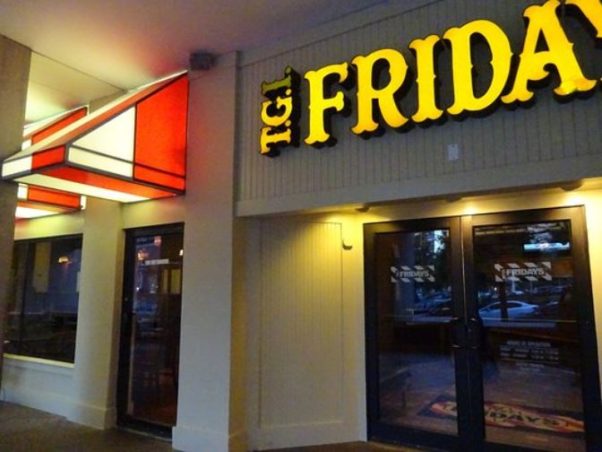 The city’s only TGI Fridays in Foggy Bottom has closed. (Photo: 1100PlumGrove/Trip Advisor)

The restaurant had seen better days – it still sported the old yellow sign with the logo that the company used from when it opened in 1965 to 2004. It was the worst-rated city restaurant on Yelp, getting only 1.5 stars. We agreed it was bad in our 2016 review.

Service was lousy, the booths and tables were in disrepair, dirty dishes sat on tables and the bar, it smelled bad inside and the food was usually wrong or over-cooked.

Jason H. from Sterling, in a one-star Yelp review, said, “This is, by far, the worst restaurant in the county. The service is terrible, the food is awful and there isn’t a single employee in the entire establishment that seems to understand restaurants re supposed to sell service and food for money. There are no upsides. The food is expensive and terrible, the service is terrible and nonexistent, and to top it off, it smells bad. I first visited this Friday’s as a GWU student in 1993, and it has never gotten better. Ever. It’s been uniformly awful for 25 years, which counts for something, I guess.”

Or T.C. from Santa Monica, Calif.’s, who said in a one-star Yelp review, “If there is a way to give -100 stars, this restaurant had earned it. Waited 20 minutes to be seated and 2 hours later, no a drink nor food had been served. Have a little time on my hands so I am curious to see how far this restaurant can go with the absolute worst hospitality anywhere in the word. It seems like the restaurant is only interested in serving alcohol to minors in college nearby. Unbelievable.”

Apparently the only good thing about the restaurant – at least for George Washington University students – was that it was “notoriously lax” about checking IDs for its insanely strong drinks, and the bottomless appetizer specials proved to be easy on the undergrad-student wallet.

“If you wanted to have a time when you could drink with no judgment and totally unwind from the craziness that was happening around you and feel a bit safe, you would go to TGI Fridays,” said one former GWU undergrad.

Estadio, 1520 14th St. NW, will transform into “Espookio” for the second year in a row, celebrating the Halloween with ghoulish décor, a special menu of festively decorated pintxos, tapas, desserts and drinks. Espookio will run from Oct. 15-31, capping off the month with the restaurant’s third annual Halloween Spooktacular Bash. 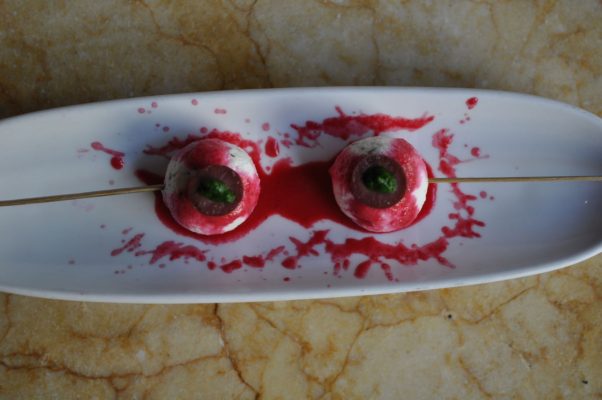 Meat options include the tarantula ($9), grilled octopus on squid ink rice drizzled with a web of aioli; the seared “foie ghoul” and blood spatter gastrique ($17), foie gras with strawberry and grilled bread; and the hangman’s steak ($16) served with roasted potatoes, butternut squash and mojo verde.

And for drinkers looking for the “boos,” bar director Adam Bernbach has created a special gin and tonic, the Nightmare on 14th Street, made with Plymouth gin and hibiscus-ginger tonic ($14). Slushitos (each $9) get bone-chilling, featuring the jack o’ lantern made with pumpkin, Shipyard Pumpkinhead Ale, scotch and lemon; and the sea monster with tequila, blue curaçao, crème de violette and green apple. And for groups to share, there is the dread red ¡rebujito! porron, served in the glass Catalan drinking vessel made with Oloroso sherry, beet juice and lemon soda ($12.50/$25).

Estadio will close out “Espookio” with its third annual Halloween Spooktacular from 6-11 p.m. on Wednesday, Oct. 31. Tickets are $31 and include tapas, pintxos, bocadillos, montaditos and other festive treats. There will be a cash bar for themed drinks, and guests are encouraged to dress up and enter the costume contest for a chance to win some incredible prizes.

Throughout the entire month of October, Astro Doughnuts and Fried Chicken, 1308 G St. NW and 7511 Leesburg Pike, Falls Church, is selling a special box of mini Halloween doughnuts with 24-hour notice and in the stores on Oct. 31.

Astro Doughuts & Fried Chicken is selling mini Halloween doughnuts in a dozen all month pre-ordered 24 hours in advance. They will also be available in store on Oct. 31. (Photo: Scott Suchman) 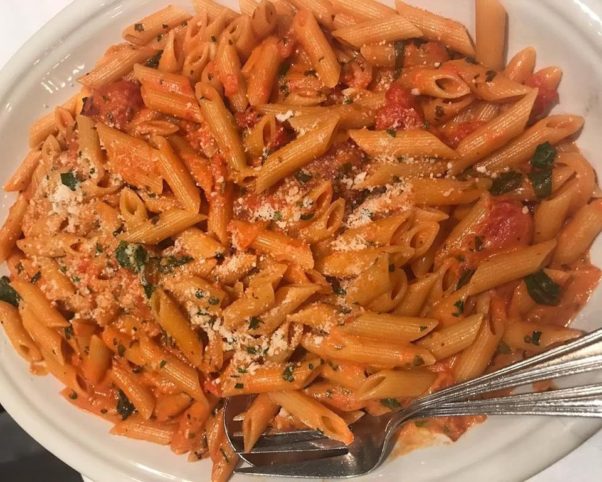 Carmen’s in Penn Quarter will be selling all-you-can-eat pasta for two for $25 from 2-4 p.m. on Wednesday for national pasta day including this penne a la vodka. (Photo: Carmine’s)

For $25, two people can eat unlimited penne, rigatoni, angel hair and spaghetti with a choice of garlic and oil, Pomodoro, marinara or vodka sauces. Advance reservations required by calling 202-737-7770. The offer is only good in the restaurant, no carry out orders.

This fall and winter, Siren, 1515 Rhode Island Ave. NW, will host a dinner series, FarmStead Evenings, beginning at 7:30 p.m. on Thursday, Oct. 18 to celebrate natural foodways and humane practices in the DMV.

During the meals, diners will savor field flavors and one-on-one interactions with the highlighted artisans in the Siren kitchen. The first dinner features Fresh Impact Farms, an ultra-efficient indoor commercial farm in Arlington, which, using advanced hydroponic methods, utilizes 90 percent less water to produce the same amount of food as traditional agriculture.

A welcome cocktail and the five-course prix fixe menu is $85 per person and an additional $45 per person for wine pairings. Seating is limited to 28 guests.

The meal includes an herb infused cocktail followed by a micro herb and flower salad with Kusshi oyster, caviar, pollen and honey. The next course is binchotan grilled octopus with kale, nasturtium and chorizo onions followed by foie gras with coffee, lovage, chestnut and fig. The entrée is black sea bass with sorrel meringue, persimmon and chicory. Dessert is marigold, orange and toasted oat namelaka with pineapple sage shortbread and tangerine lace. 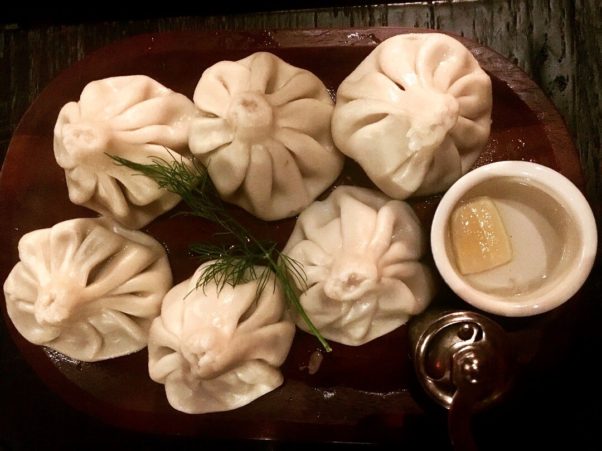 The Source and Supra will team up Thursday for a dumpling happy hour from 6-8 p.m. (Photo: Supra)

Dumplings, popular in both Chinese and Georgian cuisines, due in part to both country’s locations along the Silk Road, will be the focus of the all-inclusive happy hour. Hosted at the Source, the menu will include Chinese-style dumplings from Source chef Russell Smith along with khinkali, Georgian soup dumplings, from Supra chef Malkhaz Maisashvili paired with Georgian wines from Georgia Wine House and red and white varietals from Wolfgang Puck wines with local beer from 3 Stars Brewing and cocktails from One Eight Distilling.

The menu includes a station serving signature tiger shrimp and carrot dumplings and Berkshire port cabbage potstickers along with passed scallion rolls from The Source. Another station will served traditional beef and a seasonal vegetarian khinkali made with potato and cheese and served with a sour cream and ajika (Georgian pepper condiment) sauce with passed pkhali (vegetable paté) and eggplant nigvzit (eggplant stuffed with walnuts).

This all-inclusive event includes all the food, beer, wine and cocktails. Tickets are $45 per person. 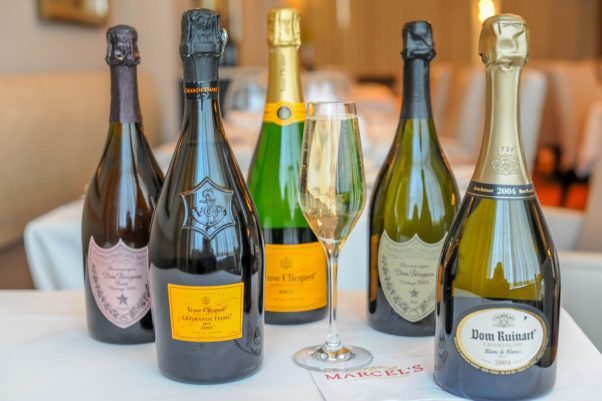 Diners at Marcel’s, 2401 Pennsylvania Ave. NW, will be greeted by glasses of Veuve Cliquot served in the dining room by a personal Champagne attendant dressed in an artfully constructed dress featuring the towering glasses of bubbly. The Lounge will offer a three-glass Champagne flight accompanied by grilled foie gras terrine with potato bilini, caviar and smoked salmon for $155. A two-glass rosé flight served with an amuse bouche is $75. Those seeking something sweet late at night can indulge with a Champagne sorbet assortment with two glasses of Moët & Chandon for $55. 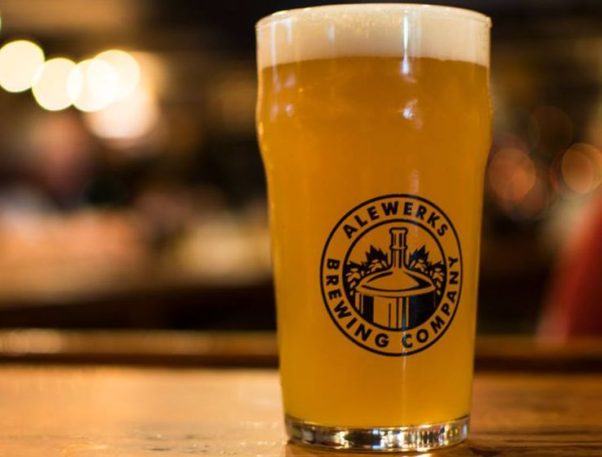 The four-course dinner will pair with Alewerks Brewing’s craft brews. The cost is $85 per person.