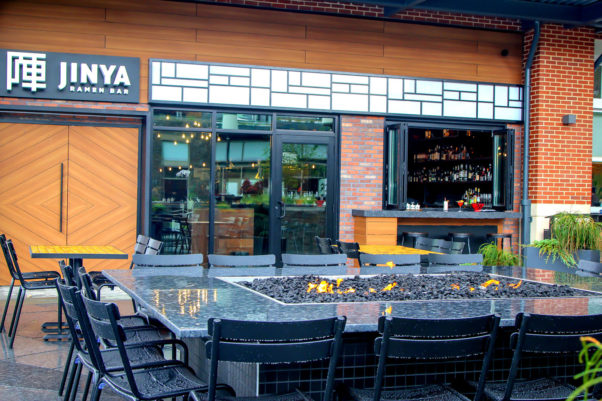 The new full-service restaurant will open at 11 a.m. with a ribbon-cutting ceremony, door prizes and other activities throughout the day. In addition, the first 100 diners will be treated to a free bowl of ramen. A portion of the proceeds from the opening day will be donated to Manna Food Center, an organization dedicated to ending hunger in Montgomery County.

Inspired by experiences with both Western and Eastern cultures, Jinya specializes in authentic Tonkotsu ramen with bold flavors and a wide variety of customizable options for the American palate. The broth is simmered for more than 10 hours, giving the ramen a robust flavor with handmade noodles aged for three days. 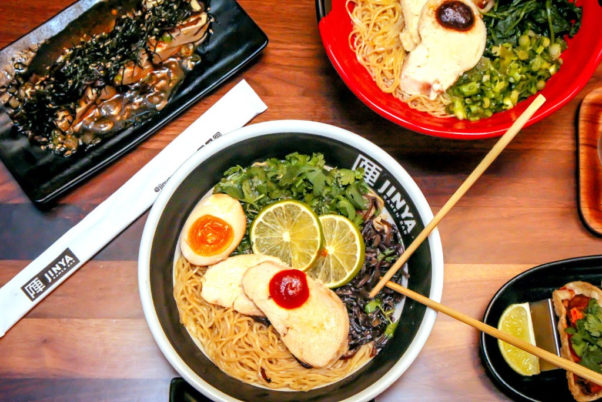 The restaurant seats 74 including 10 at the bar, with another 18 on an outdoor patio with a communal table and fire pit.

Popping up next: The Wubba Lubba Dub PUB

First there was the Miracle on Seventh Street Pop-Up Bar, then Game of Thrones, cherry blossoms and most recently the royal wedding. Beginning Thursday through Oct. 6, Drink Co. will offer the strong>Wubba Lubba Dub PUB, 1839 Seventh St. NW, based on Cartoon Network’s Rick and Morty show. 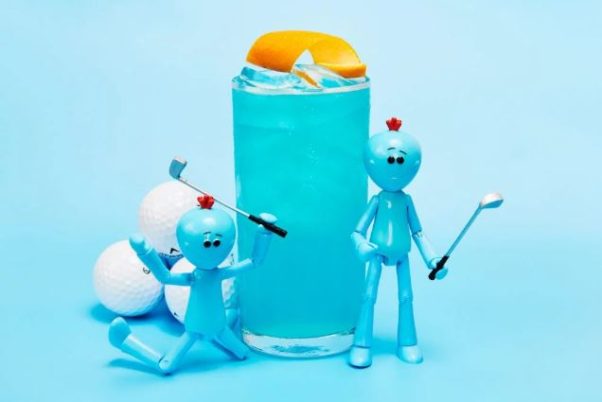 The sci-fi cartoon follows the wacky adventures of alcoholic mad-scientist Rick and his 14-year-old grandson Morty as they travel through time and alternate dimensions.

The Wubba Lubba Dub PUB, which is named after Rick’s catchphrase, has two entrances: one for people who dress as Rick, and one for everyone else. Since the company’s previous pop-up theme bars have had long lines, come in costume if you want to get inside faster.

Every room of the space, which spans three bars, has decorated like a different dimension or world in the show. Some of the components have been brought to life in 3D.

Costumed Ricks will enter through the family’s garage-turned-lab outfitted with an old washer and dryer plus shelves of scientific equipment. On the ceiling, there are “real fake doors” and “plumbus” advertised on inter-dimensional cable, a cable box Rick invented to access TV in all dimensions. Seven-foot-tall Mr. Meeseeks — blue creatures that do anything you ask — stand behind the bar.

An inter-dimensional portal made of mirrors and lights leads to another bar where cutouts of the staff’s favorite characters line the front wall next to a golden podium for the Council of Ricks. Opposite that are a bunch of Mortys. In the back of the bar is the Cygnus-5 expanse, home to the giant animatronic Cromulon – a floating head — repeating phrases like “Show me what you got,” “Disqualified!,” and “Not cool.”

The third bar recreates Anatomy Park, an amusement park inside the body of Ruben, Rick’s friend. Rides like “Pirates of the Pancreas” and red blood cells are along the wall. A radioactive green DNA strip sits behind the bar, and the top of the bar is decorated to look like brain-folds or guts. A 24-foot naked Santa is painted on the ceiling with his belly hanging over his privates. Also in the bar is a mega tree farm and a space cruiser. Like in the show, the ship is built out of garbage, including scrap metal found in an alley.

Themed drinks include “Existence is Pain,” which is bright blue and made with gin, vermouth, blue curacao, coconut water and lemon absinthe, based on something you might want to drink while playing golf with the Meeseeks. Another is “Morty’s Mind Blower” made with rosé, strawberry Campari, blanc vermouth and sparkling water served in a Champagne flute and named after tubes filled with traumatic memories that Rick has erased from Morty’s brain. “Pickle Rick Back” with Old Grand-Dad whiskey and Gordy’s pickle brine are served in mini beakers. And the “Mr. Poopybutthole,” a whiskey and fortified apple cocktail named after one a show character, is served in a poop emoji glass.

Beginning next Monday, Aug. 13, you won’t be able to pay cash for your ribs, pulled pork or brisket at Hill Country Barbecue Market, 410 Seventh St. NW, with cash. You can blame a crooked employee, who along with two accomplices, went after the restaurants’ safe four times over the last three months stealing tens of thousands of dollars before police arrested the employee Jake Walker, 25, of Hyattsville week and charged him with four counts of burglary. He had worked at the restaurant for three years. 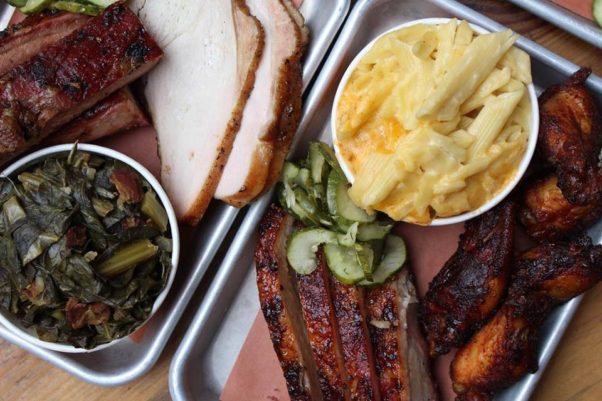 According to the Washington Post, the Penn Quarter barbecue restaurant tried different tactics to secure the safe after each incident, including bolting it to the wall and later securing it to the floor but to no avail. So to prevent such thefts going forward, the restaurant is going cashless and will only accept credit, debit and gift cards as payment. That way they won’t have to store any cash in the safe.

While cash accounts for only about 7 percent of the restaurant’s transactions, according to a note on the restaurant’s website written by founder and CEO Marc Glosserman, there were large amounts of cash in the safe due to the large volume of business.

“By maintaining this cash on premises for any period of time, we inevitably have a less secure environment that one in which there is no cash around,” he wrote. “We have dealt with this first hand, as Hill Country has recently been the victim of damaging and brazen theft. We are confident that eliminating cash will significantly mitigate the chances of future incidents and improve our team’s collective peace of mind.”

New York locations of the restaurant, however, will continue to accept cash.

Glosserman said that besides the theft and safety issues, it is faster and more efficient to not accept cash.

“Our society is increasingly moving to non-cash forms of payment as alternative methods of moving, storing and securing money have proliferated,” Glosserman wrote. “Cash as a form of payment is inherently less efficient than credit or debit cards, as our teams spend a disproportionate amount of their time handling and managing cash. Credit and debit card transactions can simply be executed faster than cash ones, which saves time and enables our servers and cashiers to better service our guests. More broadly – from managers making and counting change, to sorting and re-sorting cash from the registers, to trips back and forth to the bank to make deposits – these functions are not only costly to our business, but they detract from the time that could be spend on more productive things for the restaurant.”

But opponents say not accepting cash is discriminatory toward low-income customers who might not have access to a credit or debit card. A bill introduced by D.C. Councilmember David Grosso (I-At Large) and supported by five other councilmembers in June would make it illegal for restaurants, coffee shops, food truck and other retail food establishments to not accept cash.

“We believe fervently that restaurants should be allowed to decide what form of payment to accept based on their own respective circumstances,” he wrote. “Change is not always easy, and we anticipate there will be some bumps in the road as we make this transition.”

Five D.C. restaurants made Bon Appétit magazine’s annual list of the 50 Best New Restaurants in America, well maybe 52 since it counted three restaurant at the new Line Hotel in Adams Morgan as one. 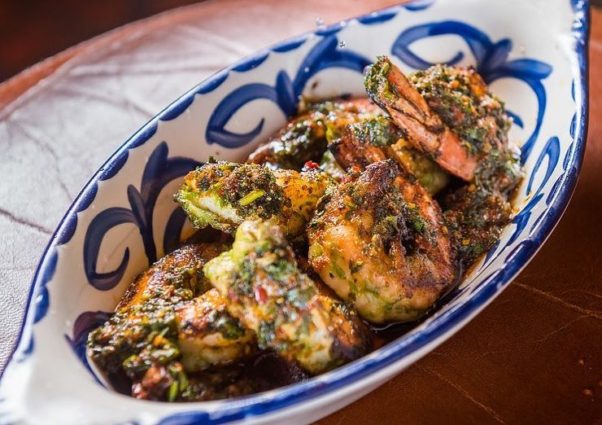 Shrimp from Maydan, a Middle Eastern/North African restaurant that was named one of Bon Appétit magazine’s 50 Best New Restaurants in America. (Photo: Maydan)

Among the “eclectic, inspiring and very delicious nominees” for the magazine’s Hot 10 list, which will be announced Aug. 14, are Maydan, 1346 Florida Ave. NW, the fiery Middle Eastern and North African spot; Mount Pleasant’s Ellē, 3221 Mt. Pleasant St. NW, the bakery/cafe/dinner destination; and all of the full-service restaurants at The Line Hotel, 1770 Euclid St. NW, including Spike Gjerde’s hyper-seasonal A Rake’s Progress along with Erik Bruner-Yang’s Taiwanese-meets-American lobby restaurant Brothers & Sisters and his standing-room-only Spoken English. 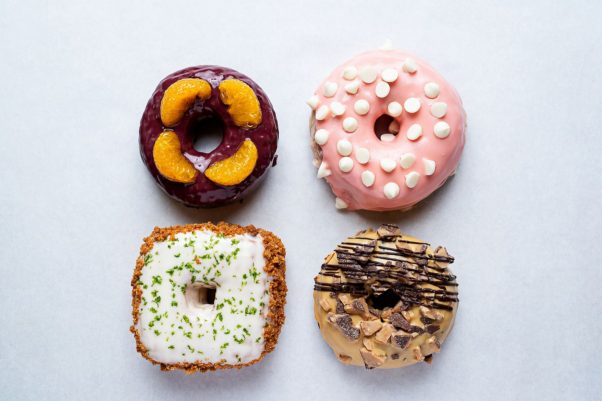 On Saturday, Aug. 11, Red’s Table, 11150 South Lakes Dr., Resont, will host a four-course dinner featuring four varieties of Belvedere Vodka, which is crafted in a distillery located in the heart of central Poland, starting at 7:30 p.m. The cost is $85 per person.

Every step of production of Polish vodka must occur on Polish soil with locally-sourced raw ingredients with zero additives in accordance with Polska Vodka geographical indication requirements.

The first course include chicken larb, minced chicken with toasted rice and citrus paired with a wild berry sidecar with lemon, Cointreau and Belvedere Wild Berry; followed by a second course of gumbo with a D.C. halfsmoke and Carolina shrimp paired with a Summer Haze with cherry pepper, lemon, lime and Belvedere Mango Passion. The entrée is a tandoori lamb kabob with basmati rice, sumac and tabbouleh paired with a Watermelon Cooler with cucumber, mint and Belvedere. Dessert is pineapple cake with toasted coconut cream paired with a Violet Passion made with passionfruit, basil honey, blueberry lavender shrub and Belvedere Unfiltered.