Like adjoining Indian street food restaurant Bindaas, the name is slang for “cool,” but in Hebrew instead of Indian. The two restaurants are meant to compliment each other in style and price.

Bajaj considered a number of family style cuisines, but settled on Israeli after a trip to Jerusalem, Tel Aviv and the West Bank. Sababa will serve modern Israeli cuisine inspired by the Middle East, Turkey and Greece, according to a press release.

Ryan Moore, who graduated from L’Academie de Cuisine in Bethesda and most recently worked at Bistro Provence in Bethesda and previously at Zaytinya, Minibar, Ris and the shuttered Rogue 24, will lead the kitchen. Sababa’s menu, like Bindaas, will consist of small plate and larger plates that can be share.

Dishes will include salads, hummus, mezze, kebabs and platters for the table with many vegetarian options as well as chicken, lamb and fish priced from $8-$26. Selections on the opening menu include carrot salad with dates and mint; beetroot relish with tahini and pistachio; charred eggplant with herbed labneh, pomegranate and pistachio; dorade crudo with choban salad, chili, cucumber, tomato and lemon; harissa-marinated chicken thighs; lamb shank with braised red cabbage, dates and citrus; grilled sardine with feta, walnut and charred zucchini; kushari, chickpea with rice, lentil, pasta, fried onion and spiced tomato sauce; and vegetable tagine with charred okra, herbed couscous and tomato. There will also be a daily whole fish wrapped in grape leaves.

The drink menu will include 60 Mediterranean wines by the bottle priced from $38-$75 and eight by the glass priced from $10-$15. There will also be four signature cocktails priced at $12 each including the Zephyr Breeze made with Cotton & Reed rum, pomegranate soda, rosehip and sumac; Gardens of Haifa with Montelobos mezcal, sundried tomato, red pepper, garlic, parsley and thyme; Cradle of Civilization with rye-infused Filibuster whiskey, sorghum molasses, oak bitters and caraway-sesame cookie; Phoenician Frappe with Green Hat gin, Etrog liqueur, arak, mint, lavender and soda; and Halvia World Away with Casamigos Añejo, carrot, pistachio oregeat, cardamom and apricot.

The space will get a makeover by Martin Vahtra of Projects Design Associates of New York with a new lounge area featuring a bench, throw pillows and ottomans. The walls and ceiling will be draped with bedrolls to create a tent-like feel, the floor will have antique tile with a Middle Eastern graphic design and the 12-seat bar will mimic a grape arbor with string lights.

The 90-seat dining room will have backlit Middle Eastern screens covering the walls with white canvas hanging from the ceiling to mimic sales while lanterns will give the illusion of a casbah tent. The color scheme will include blues and other jewel tones. A 40-seat upstairs dining room will be used for private events, but on busy nights it will serve as overflow for both restaurants. 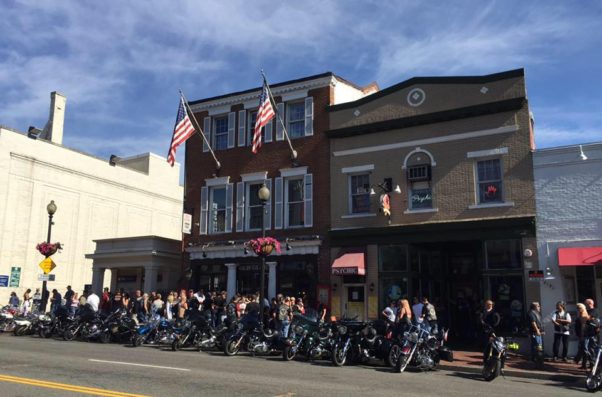 “We made the extremely tough and sad decision to close Old Glory BBQ for good,” a sign in the window said. “It has been our privilege to be a part of the Georgetown community for the past 26 years, and we thank all of you for making such great memories with us.”

Old Glory was owned by Capital Restaurant Concepts, which also owns J Paul’s and Paolo’s in Georgetown and Georgia Brown’s on McPherson Square.

Andres is pairing with Bechara Nammour of Capital Restaurant Group on America Eats. The restaurant, which features Mid-Atlantic cuisine and iconic American dishes, is expected to open in early summer. 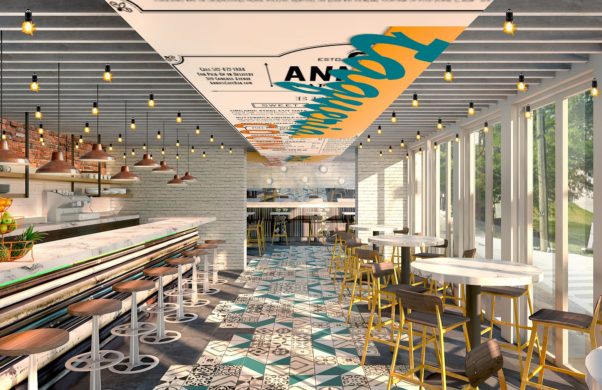 An architect’s rendering of the inside of Tacos, Tortas & Tequila opening next month in Silver Spring. (Rendering: HapstakDemetriou+)

The 1,500-square-foot TTT, an authentic meets modern Mexican diner with 50 seats and a 10-seat bar, will serve breakfast, lunch and dinner on the first floor with grab-and-go service available from 7 a.m.-11p.m. The menu will include $3-$5 house-made tacos and $7-$12 tortas and quesadillas.

On the second floor, the 3,700-square-foot Buena Vida will seat 150 including 50 in a private dining area and 10 at the bar. It will feature casual, contemporary dining including an unlimited Mexican small plates dinner option priced at $35 per person, as well as weekend bottomless brunch option priced at $39 per person.

The menu at Buena Vida will have an emphasis on vegetable dishes. Lunch will feature salads, sandwiches and chef’s signature dishes such as black bean and kale soup, Yucatan guacamole with pickled mango and goat cheese, and Carolina shrimp and crab enchiladas. Prices will range from $8-$19. Dinner will include more than 40 small plates ranging from $6-$14 and include mezcal-cured organic salmon tostada; sweet corn empanadas house-made with organic corn masa, guajillo garlic and salsa verde; chilorio braised Marcho Farms pork sopes; and Roseda Farms steak alambre with house-cured bacon, poblano and Oaxaca cheese.

Both will have happy hour specials — throughout TTT on weekdays from 4 p.m.-7 p.m. and at Buena Vida’s bar of Buena Vida with $5 drinks and food specials.

Graham Bartlett, who most recently served as regional executive chef for Richard Sandoval Restaurants, has been tapped as chef de cuisine for both restaurants with dishes incorporating cage-free eggs and meats primarily sourced from Amish farmers, along with seafood from the Chesapeake.

At the bars, Buena Vida will serve wines representing Spain and South America with bottles ranging from $25-$80 with 16 wines available by the glass priced from $8-$15. There will also be traditional and craft Mexican beers by the bottle and on draft, along with tequilas, including blancos, reposados, añejos, premium and house-infused options staring at $8. A vertical tasting will be available featuring tequilas made with different aging techniques as will a horizontal tasting comparing three tequilas made by different distilleries with prices beginning at $18. A variety of mezcals, starting at from $8 per shot, will be available along with a mezcal tasting highlighting three unique selections for $25.

TTT will offer a cocktail menu featuring agave cocktails as well as classic margaritas priced from $8-$12. There will also be La Colombe coffee, milkshakes and traditional and craft Mexican beer.

HapstakDemetriou+ is designing both spaces. TTT will have vibrant colors and bold graphics inspired by the colorful street food scene of Mexico along with a 12-seat heated sidewalk terrace covered by an awning. Buena Vida will feature natural woods woven textures and greenery with a wrap-a-round bar will energize the space and offer a dramatic focal point.

Mason Dixie Biscuit Co. shuttered its drive thru at 2301 Bladensburg Rd. NE on Sunday after only 11 months. Management plans to reopen at a new Metro-accessible location in Northwest. 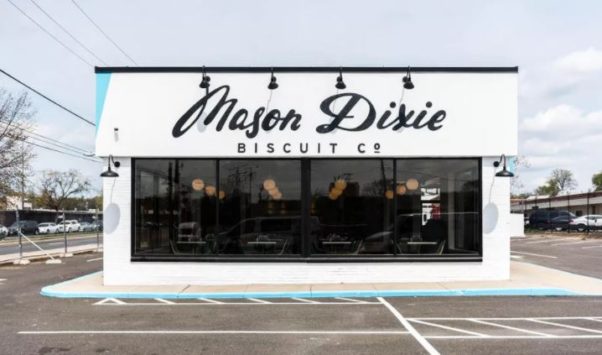 “After a year at the drive-thru, there are a lot of limitations we cannot over come at this location,” said CEO and co-founder Ayeshah Abuelhiga in a statement. “We realized that the appeal of the restaurant was less about the convenience and speed of service through the drive-thru, but more about the sit-down environment where you can enjoy a conversation and brunch on the weekends with friend and family.”

The company is negotiating a lease for an undisclosed location in Northwest that is about 40 percent bigger than the old location. A spokeswoman said it will not have a drive thru window. They plan to serve breakfast, lunch and dinner seven days a week.

In the meantime, Mason Dixie will continue to offer home deliver through online service Caviar. They also hope to have pop-ups close to the new location, but the restaurant won’t return to Union Market.

Management also plans to retool the menu with more sandwiches, platters and specials. “This is our opportunity to relaunch the brand in a way that aligns with customer expectations for service, and that is the most important thing for u as we plan on scaling the restaurant concept for future locations, Abuelhiga said. 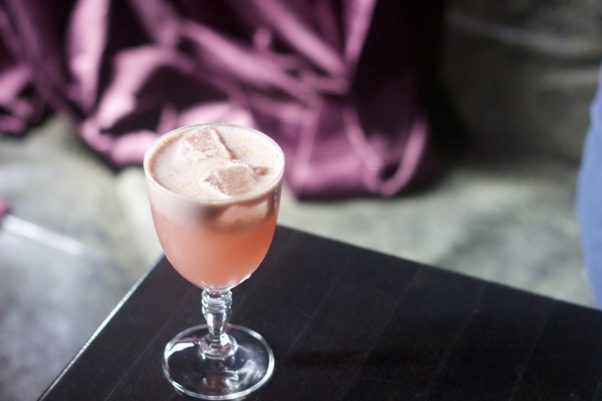 The menu includes Saints Were Normal People Like You & I with Blue Haven gin, St. Germain, green tea, honey and lemon; and A Giant Omelette with Absolut Elyx, Chareau, egg white, burnt sugar, black pepper, lemon and tarragon. Others include the Bad Bunny Business with Avion silver tequila, casis, lime and Bols yogurt liqueur; and Every Sinner Has a Future with Aberlour 12-year, Soho lychee liqueur, creole bitters and Pernod Pastis.

Recently appointed executive chef Drew Adams of Bourbon Steak at the Four Seasons Hotel, 2800 Pennsylvania Ave. NW, is a forager and some of his finds are showing up on the menu.

Adams, who previously worked at Plume, Rose’s Luxury and The Dabney, is taking his culinary team on the road from the streets of D.C. to the backwoods of Virginia for a series of foraging nature walks searching for items like wormwoods, fiddleheads and edible flowers to give his staff a greater sense of locality, such as his use of Lindera Farm vinegars and meat from the Shenandoah Valley.

Their finds will be used in new dishes like the wood ear mushrooms and black truffle in the chicken ballotine or the braised short rib pappardelle made with 7X Ranch Wagyu beef, tarragon and rutabaga. Other new dishes featuring local ingredients include roasted beet soup with red cabbage, mustard cream and apple; and Alaskan king crab with coconut and cara cara orange garnished with seaweed. Adams’, a Maryland native who grew up crabbing, features the local waterway with his Maryland crab cake and crab imperial with uni. 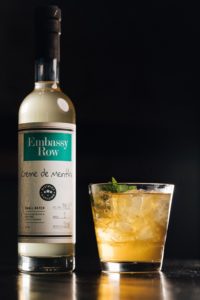 District Distilling, 1414-1418 U St. NW, recently unveil is new Crème de Menthe. It is the newest addition to its Embassy Row line of small batch spirits.

For the test batch, executive chef Justin Bittner collected mountain mint from his parent’s farm, Alder Meadows, in Southern Pennsylvania and chocolate mint from Northern Neck Farm in Heathsville, Va. He also sourced wildflower honey from Stoner Apiary in McConnellsburg, Pa. Head distiller Matt Strickland then distilled the mint for four months using Corridor vodka as the base spirit and added honey. When Strickland achieved the taste profile he wanted, he filtered the spirits three times.

It has an egg white appearance with a slight hue. The nose is dark chocolate mint, reminiscent of Andes chocolate mints, followed by the depth of the woody mountain mint varietal and finally the wildflower honey giving the nose a floral, herbaceous scent. On the palate it is sweet, viscous and smooth.

District Distilling’s Crème de Menthe is priced at $25 for a 375ml bottle. 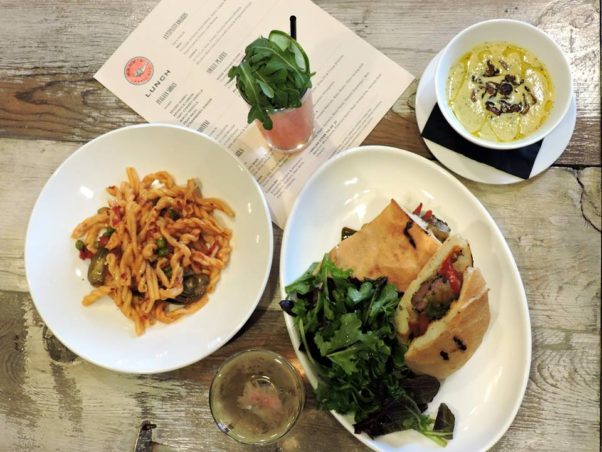 Express options like the Veloce, a house salad served with a half of one of three sandwich options including the Italian Flag, a caprese sandwich with house-made mozzarella, pesto and grilled tomatoes are priced at $11. For $13, the Presto includes a house salad and a half-portion of one of four handmade pastas including bucatini cacio e pepe with parmesan, cream and fresh ground black pepper.

The menu also includes small plates, such as grilled octopus with an arugula fennel salad and house-made ricotta with honey, black pepper and grilled bread. Salads and soups feature selections like the mixed seafood grill salad with mesclun greens, shrimp and squid. The oven-roasted fresh catch with roasted baby carrots and roasted potatoes will also be available for diners who want a heartier meal. 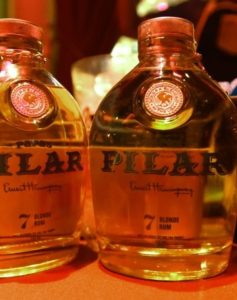 Diners will learn the history of rum and its many forms from white and spiced to aged rums. They will also hear how the spirit is intertwined into American and Cuban history.

Also throughout March, the restaurant will feature the Papa’s Watering Hole cocktail for $10 made with a combination of Papa’s Pilar Blonde, watermelon basil purée, fresh lime juice and fall spice syrup shaken and garnished with a mint sprig, watermelon segment and charred cinnamon.