Siren to Open in Scott Circle in Late April

Siren, a new seafood restaurant from chef Robet Weidmaier, will open this month in The Darcy Hotel, formerly the DoubleTree on Scott Circle. (Photo: Siren)

Sirens are dangerous mythological Greek sea nymphs who lured nearby sailors with their enchanting music and voices to shipwreck on the rocky coast of their island.

The brass-trimmed interior will have the feel of a captain’s quarters with dark millwork, deep red accents and splashes of oceanic blue. The walls will be adorned with folkloric yet edgy depictions of mermaids as well as tattoo designs from bygone sailing cultures. Many evenings will feature live jazz.

The menu will focus on seafood from around the world, with emphasis on the North Sea, where sole and turbot are found. You can also expect king crab, prawns and salmon from Alaska, fish from Hawaii and sea urchin from Japan as well as local rockfish, sugar toads and oysters.

The small, constantly changing menu allows for a free diver in Bangor, Maine, to send down the 10 sea urchins he brought up that morning. Ten diners will enjoy them, and then it is over until the next time they are available. Raw bar offerings include chilled poached seafood, ceviches and sashimi will be prepared from displays in the open presentation kitchen. Seasonal fruit-forward desserts complement the savory side of the menu with a light finish.

“If guests would like to start with a whole fish and follow that up with caviar, we’re right there with them,” Weidmaier said in a press release. “If they want nothing but an array of small plates, the world is their oyster!”

Cocktails reflect the spirit of the exotic spice and rum trade. A comprehensive wine list provides pairings for the ever-shifting menu, as well as stand-alone choices.

Also at the Darcy, Bayou Bakery’s David Guas will open Li’l B, a café and coffee shop.

Del Campo, 777 I St. NW, got a new look and menu recently, just in time for its fourth anniversary. 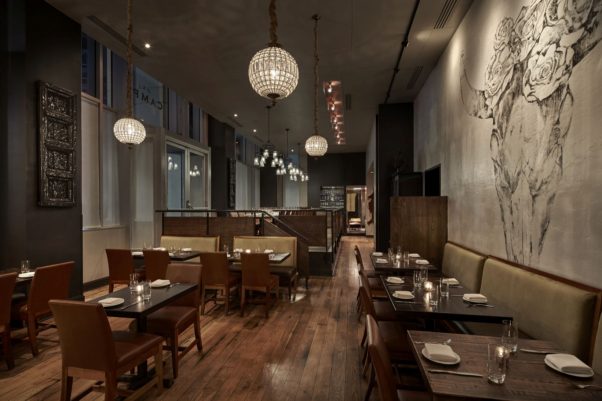 Swatchroom’s Maggie O’Neil got rid of the white tablecloths and added cowhides and a cow skull painting. (Photo: Greg Powers)

In the dining room, the white tablecloths are gone, replaced by new handmade hardwood tables to create a more intimate environment. The walls are adorned with bold graphical elements, including acid washed cowhides brought from Argentina, a decorative cow skull painting in the rear dining space and a rose mural decorating the bar area. Maggie O’Neil of Swatchroom is behind the look, which includes vivid green tiles accentuating the asado bar and a dark, textured surface surrounding the grand, back-lit mirror behind the bar. Deep, rich colors have remade the private dining room and a panoramic landscape conceals the room’s television when not in use.

Since opening in April 2013, Del Campo has brought the lifestyle and food culture of Argentina, Uruguay, Chile and Peru to the nation’s capital. Now, with an annual milestone approaching, chef Victor Albisu is expanding the restaurant’s geographic ambitions to explore even more of Latin America’s unique flavors, while updating the dining room with dramatic touches that better match the cooking’s contemporary energy and flair.

While the grill and asado menu are still there, the menu now includes an expanded selection of South American flavors and shareable options such as lamb and pork mixed grills, which allow diners to explore selections in which the cuts and preparations change weekly. Options include lamb chop and skewered tongue anticuchos, or a bone-in pork loin, cured for 14 days then grilled and served with an aji amarillo-based barbecue sauce and grilled citrus mostarda. Other dishes designed for a group include a whole lobster grilled with rocoto chili butter, grilled prawns with saffron chimichurri, crispy yucca with pecorino and red chili aioli; and the Chinatown Chirashi, a plate of citrus-cooked tuna, corvina scallop, caviar, togarashi deviled quail eggs and smoked shoyu brown butter.

South America’s many Asian influences are reflected in new dishes like a grilled duck breast served with preserved orange, Szechuan peppercorn and honey; and hot grilled calamari ceviche dressed with aji yuzu kosho. House-made yellow alkaline pasta is the star of a dish of Street Noodles served with burnt bok choy and dressed with a sambal made from Peruvian and Chilean chilies. 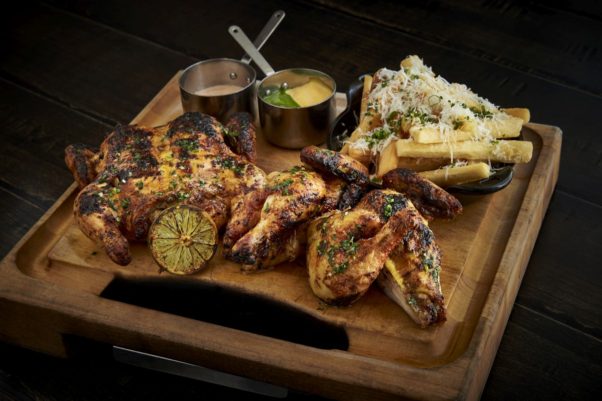 “To anyone walking into Del Campo for the first time in a while, it’s going to look like an abrupt change,” Albisu said in a press release. “But this has been more of an evolution that has been taking place since we opened. Restaurants like Del Campo always reflect the passions and interests of their chefs, and those things grow as we explore and learn. Del Campo has never been a static concept, and my South American travels have really opened my eyes to the long existing interconnectivity of South American, European, Asian and North American cooking. We figured that the fourth anniversary was a great opportunity to freshen up the dining room and put some of the more interesting and adventurous dishes we have been playing with over the last few years front and center on the menu.” 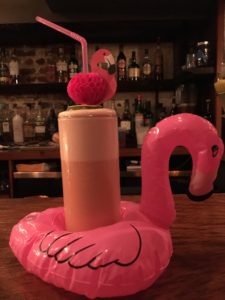 While the Dram & Global theme remains, paying tribute to some of the finest drinking cities around the world (London, Tokyo, New Orleans, Havana and San Francisco), the menu, which launched last week, is almost completely different with 20 new cocktails.

With patio season upon the DMV, Osteria Morini, 301 Water St. SE in the Capital Riverfront development, is serving an “April Spritz” menu of three spritz-inspired, effervescent cocktails for $13 through the end of the month. 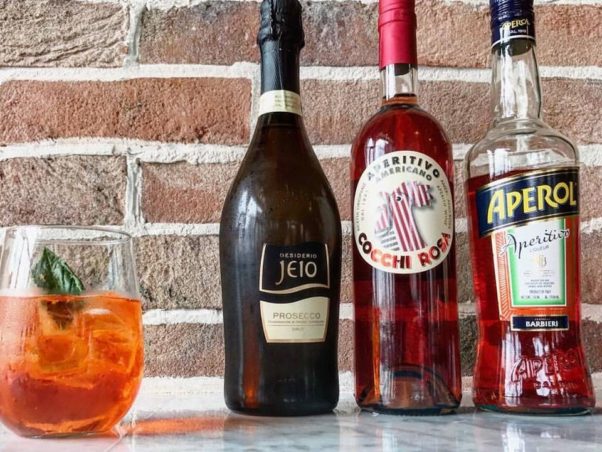 The cocktails are available at the bar, in the dining room or on the patio.

The drinks include the Aperol Crush made with orange and basil infused Aperol, Cocchi Rosa and Prosecco; the Negroni Sbagliato with Campari, Dolin sweet vermouth and Prosecco; and the Blanco Spritz with Gran Classico bitter, Dolin blanc vermouth, Prosecco and orange. 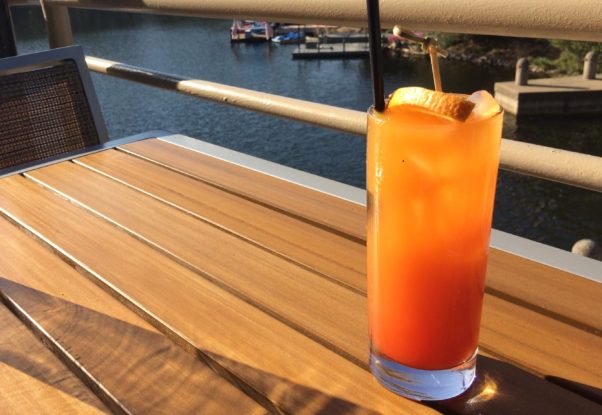 Red’s Talbe in Reston is serving five $10 spring cocktails to sip on the restaurant’s two patios over looking the lake including this I Wish I Was Still in Jamaica with light rum, dark rum, orange juice, mango and pineapple. (Photo: Red’s Table)

The new seasonal cocktails include the Twisted Whiskey made with bourbon, Cointreau, honey simple syrup, lemon juice, orange juice, angostura bitters and orange bitters; the I Wish I Was Still in Jamaica with light rum, dark rum, orange juice, mango and pineapple; the Herbed Julep with Bulleit bourbon, simple syrup and lime juice; the Oye Como Va with tequila, cherry pepper brine, pineapple juice, pineapple all spice shrub and Cardamaro Amaro; and the Rhubarb Dill Dickel with Dickel rye, strawberry dill shrub, rhubarb purée and lemonade. Drinks are all $10 each. 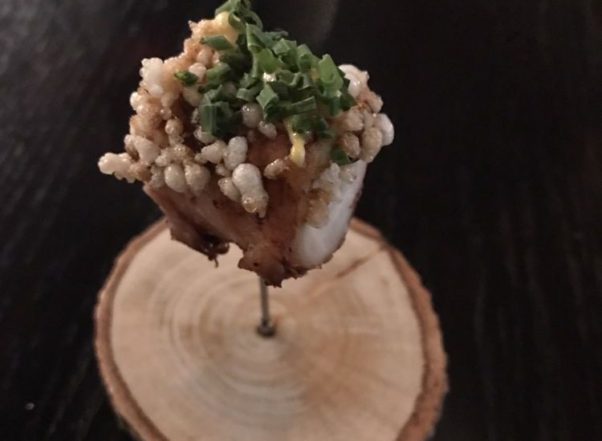 Conosci celebrates its first anniversary tonight from 7-10 p.m. with passed hor’s d’oeurves, such as this braised octopus, cocktails and unlimited wine and beer. (Photo: Amanda B/Yelp)

Beverage director Eric DiNardo will be sabering magnums of sparkling wine and chef George Rodrigues will be sending out bites from the restaurant’s tasting menu, such as braised octopus, tapioca chips with smoked trout roe and pork belly. The cocktails will be in collaboration with Republic Restoratives, the first local and female-owned distillery.

Also, through April 22, the restaurant will offer half price bottles of sparkling wine, as well as an exta amuse bouche for each diner. 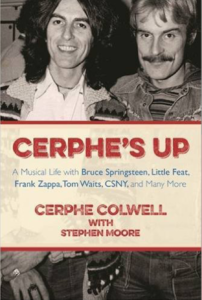 The local DJ, who lives in Leesburg, Va., formerly worked for DC101, WJFK and WHFS and can currently be hear on the online Music Planet Radio. He helped promote the early careers of Bruce Springsteen, Lowell George, Tom Waits, Frank Zappa and many other rock luminaries.

There will be passed appetizers and happy hour prices on all drinks during the signing. Diners who stay for dinner will receive 15 percent off their bill by showing their signed book.

For $35, diners will get a pound of Louisiana crawfish with corn on the cob, new potatoes, coleslaw, mini muff-a-lottas and cornbread. (Photo: Bayou Bakery)

Diner can “suck the heads and squeez the tips” with live music from New Orleans native Nick Adde. Tickets are $35 at the door and include a pound of Louisiana crawfish with corn on the cob, peppery new potatoes, coleslaw, mini muff-a-lottas and cornbread with free seconds while supplies last. There will also be jumbo Gulf shrimp with taters and corn sold by the pound. 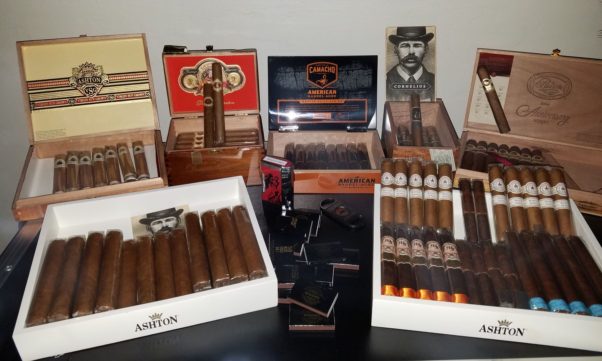 Sakerum will host cigar night every Monday from 7:30 p.m.-1 a.m. on its enclosed rooftop. (Photo: Sakerum)

Cigar aficionados can enjoy a cigar under the stars while sampling sushi, Latin-Asian small plates and a selection of spirits including Japanese whiskey, rum and scotch. Guests can bring their own cigars for an $8 cutting fee or purchase one from Sakerum’s collection.