Chef Nora Poullion of Restaurant Nora, 2132 Florida Ave. NW, D.C.’s first organic restaurant, is planning to retire — but not right away. She is looking for someone to take over the restaurant, which has been open for nearly 38 years, and carry on her legacy. 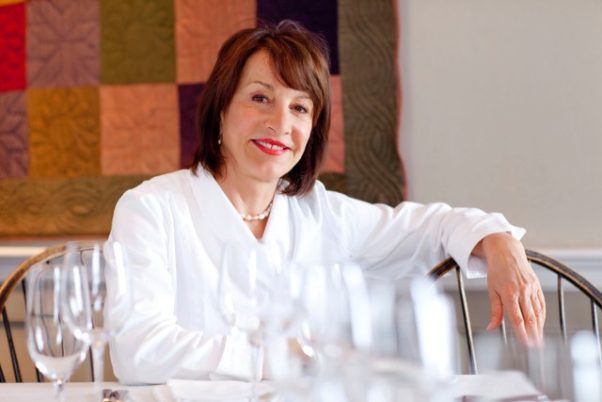 Years before farm-to-table and organic kale was on the menu at seemingly every D.C. restaurant, you could find it at one restaurant — Restaurant Nora, which was the first certified organic restaurant in the country in 1999. The chef and her rustic, but elegant, dining room has inspired a generation of chefs to shop locally for high-quality ingredients.

“At this point in my life, I want to be a leader and an inspiration to share my vision,” Poullion, who turns 73 this month, said in a press release. “Since none of my four children want to take over Restaurant Nora, it won’t be a fast transition. It might take years to find the right person who is as passionate as I am about organic, healthy food, but I have so much confidence in today’s enthusiastic generation of chefs and restaurateurs.”

Restaurant Nora has become one of the District’s most famous dining spots. In January 2010, President Barack Obama held a surprise birthday party for First Lady Michelle Obama at the restaurant, and it is reportedly one of Democratic presidential nominee Hillary Clinton’s favorite restaurants. Even Muhammad Ali dined there as has every president in office except George W. Bush.

Poullion was married to a French journalist when she moved to D.C. in the 1960s and found a culinary nightmare. There were hardly any fresh vegetables in your neighborhood grocery store and the options were always the same, despite the season. “Oranges, iceberg lettuce, the bread was wonder Bread,” she recalled. “I realized that the food here was very different from Europe.”

Horrified by unhealthy American food, she taught herself to cook then taught others. After working at the Tabard Inn, she bought a former grocery store and opened Restaurant Nora in 1979. Although still rare, female chef-owners were almost unheard of at the time.

She hopes that whoever buys the business and building will carry on her philosophy of local and healthy, but the organic certification will likely end because of the onerous requirements, which took her two years to achieve: All of the food that comes into the kitchen must be certified organic. Even her table linens are laundered in chlorine-free biodegradable soap. There are only a handful of certified organic restaurants in the country.

She offered to sell the restaurant and building to Haidar Karoum, former chef of Proof, Estadio and Doi Moi, who recently struck out on his own. He worked for Poullion at Asia Nora, her former fusion restaurant, but he declined. But he has plans for something less formal.

The Austrian-born Poullion is the author of several cookbooks and a 2015 memoir My Organic Life: How A Pioneering Chef Changed the Way We Eat Today. When she retires, she plans to spend time with her four (soon to be five) grandchildren. “I’ve never had time to be a grandmother,” she told The Washington Post. She also will “continue to promote her key belief in a healthy, organic lifestyle beyond the kitchen of Restaurant Nora,” the press release said.

Owen’s Ordinary from Neighborhood Restaurant Group opened Monday at 11820 Trade St., North Bethesda in the Pike & Rose development. It is the company’s first restaurant in Maryland. 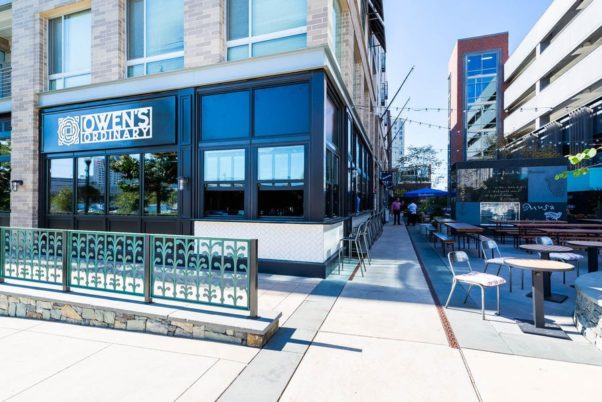 NRG beer director Greg Engert has put together a list of more than 200 craft beers at the tavern and beer garden. At least a quarter of the beers have never are not available anywhere else in Montgomery County. That includes brews from NRG’s Bluejacket, which will be available outside the Navy Yard facility for the first time. About half of the 50 draft beers and a third of the bottles come from Maryland breweries.

“There’s no other place in Maryland that’s serving this kind of breadth and depth of Maryland brewers,” Engert told Washingtonian magazine. “It’s pretty cool that MoCo—the dreaded MoCo—is the place that’s allowing this to happen.”

But the county’s Department of Liquor Control carriers fewer items than distributors in D.C. and Virginia, so more products have to be special ordered. To avoid running out some beers, Engert must plan further in advance, and the restaurant built larger coolers to stock more inventory.

The 6,000-square-foot, 175-seat restaurant, named after a tavern on Rockville Pike in the late-18th century, was designed by Catherine Hailey. It has a steampunk decor with lights that resemble heat lamps, copper pipes on the ceiling that transport the draft lines from the keg room to the 50 taps at the bar, wooden floors, leather banquettes and subway tile around the two-sided soapstone bar built into the facade so it can serve the beer garden too. Outside in the 60-seat beer garden, there is picnic table seating with TVs.

Miracle on Seventh Street returns bigger than ever 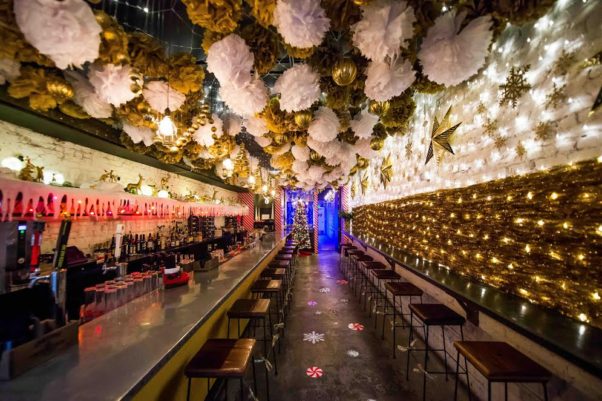 Miracle on 7th Street, which included whimsical winter wonderland décor touches like a dreidel chandelier and a nativity scene starring gilded dinosaurs, will take over all three of Derek Brown’s Shaw neighborhood bars this year. In addition to the craft cocktail menu, Stella Artois and Budweiser will create a new beer cocktail for the themed menu, along with beer inspired swag and other boozy treats.

“Last year was so much fun, it’s hard to imagine how we could make it more fun, but guess what: we will,” said Brown in a press release.

Miracle on Seventh Street will launch the day after Thanksgiving and end with a New Year’s Eve bash on Dec. 31. Details of menu items, themed nights and specials are still in the works. More details as they become available.

Z-Burger, 2157 P St. NW, that was recently featured in a video that went viral showing a rat running across a table has closed while its owner makes some changes. 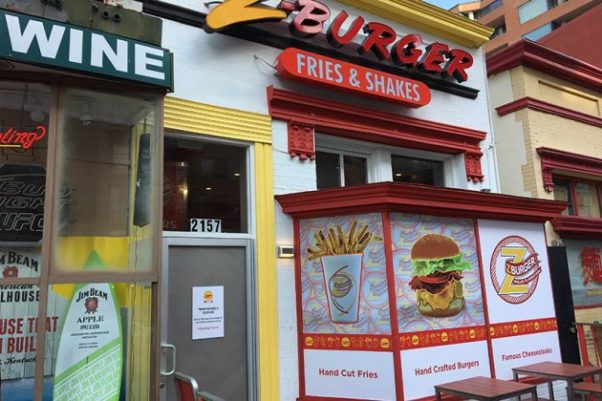 Z-Burger in Dupont closed to remodel and hire new staff after a viral video showed a rat running on the tables after hours. (Photo: Tim Regan/Borderstan)

Owner Peter Tabibian said he is hiring new management and staff and doing some renovations. “We’re going to change the concept a little,” Tabibian told Borderstan. “We’re going to get the place nice and renovated and cleaned up.”

The closing came less than a week after the video, and D.C. Department of Health inspectors noted “evidence of rodents… outside of the food establishment” but saw no live rats when they visited the restaurant Monday.

Tabibian opened the Dupont and Towson locations after he and his partners had a falling out. After a court battle, he got to keep the Z-Burger brand and restaurants in Columbia Heights and Tenleytownand the food truck. His former partners converted locations in Clarendon, Glover Park, Southwest Waterfront and White Marsh to All About Burger.

When the Dupont Z-Burger reopens, it will have new menu additions, including breakfast items, Tabibian said.

G by Mike Isabella, 2201 14th St. NW, has gotten some renovations that include the addition of a 15-seat bar area, a new cocktail program, extended service from 11 a.m.-10 p.m. seven days and added delivery. 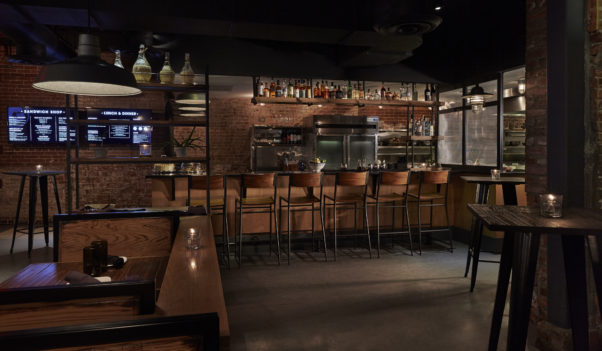 G sandwich shop has replaced it counter with a full-service bar and changed to an all-day menu. (Photo: G)

“We opened G as a sandwich shop by day and an Italian restaurant by night, but now we have moved to an all-day menu where guests can get a sandwich or a great bowl of pasta any time,” said Isabella in a press release. “As part of the design refresh we’ve added a full-service bar.”

While the sandwiches and classic Italian fare remain, chef de cuisine Elliot Drew has updated the menu, making the full selection of sandwiches, antipasti and pastas available any time. The Sunday Gravy menu with the end-of-week family meal will continue.

New items include focaccia flatbreads, like the meat gravy with sausage, meatballs, ham, tomato and mozzarella; and the bianco with grilled mushrooms, spinach and taleggio.Most are also now available for online ordering and local delivery through Grub Hub.

The new bar program includes bottled classic cocktails including Negroni, Manhattan and others, as well as signature drinks with an Italian slant such as the First & Last made with Caorunn gin, coco nibs-infused Campari, Cinzano Rosso and Orange Indi tonic; and Quirk on the Beach with Nonino amaro, Diplomatico Anejo rum, cardamom honey, lemon and prosecco. The bar also features a new happy hour from 7-10 p.m. Sunday through Thursday with $5 beers, $6 wine by the glass, $7 cocktails and $5 bites with selections like arancini, agra dolce wings, burrata, charcuterie and meatball sliders. 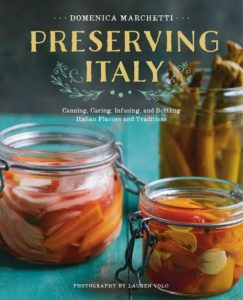 Chef Michael Schlow and Italian cookbook author Domenica Marchetti will partner to prepare a four-course meal at Conosci inside Alta Strada, 465 K St. NW, highlighting recipes from Marchetti’s latest book, Preserving Italy. Schlow will put his own personal touch on the authentic Italian traditions that are featured in the cookbook.

The meal begins with a welcome drink at 6:30 p.m. followed by the dinner at 7 p.m. Cost is $65 per person and includes a signed copy of the cookbook. Beverage pairings are available for an additional $50.

The menu includes crostini with sweet and sour peppers and fresh mozzarella followed by spaghetti alla chitarra with classic meat sauce. The main course will be grilled pork chops with apricot-mustard sauce and farro salad with preserved winter squash and dried cherries. Dessert will be huckleberry jam crostata.

Chefs for Equality set for Oct. 26 at Ritz-Carlton 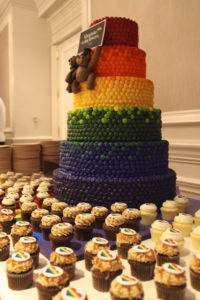 More than 100 DMV chefs, pastry chefs and mixologists are joining forces for this year’s event. The theme — Equality Street USA! — celebrates that all streets allow each and every person to walk freely and equally no matter what race, shape, color or sexual preference.

“I’m thrilled to bring together leaders of the culinary community for a very special night not only to celebrate how far we have come, but to raise awareness and funds to finish the job,” said D.C. and author David Hagedorn in a press release. “With an evening of festivities that support such a worthy cause, these sweet wedding-themed displays will truly be… the icing on the cake!”

Tickets are $200 per person. Proceeds benefit the HRC’s efforts to protect same-sex marriage and equal rights throughout the country. 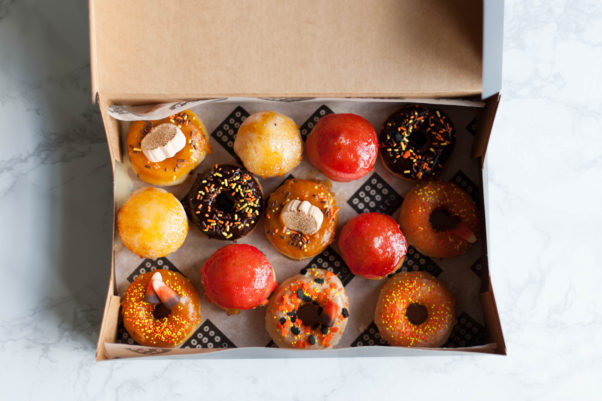