Busy Weekend on Tap in the DMV

This could be one of the biggest and busiest weekends this year in the DMV. Visitors will be flocking to the area for the opening of the National Museum of African American History and Culture; Saturday’s National Book Festival; Art All Night, which takes over the city on Saturday evening; and D.C. Beer Week events, which start Saturday afternoon. Expect road closures and crowds, and pack your patience. 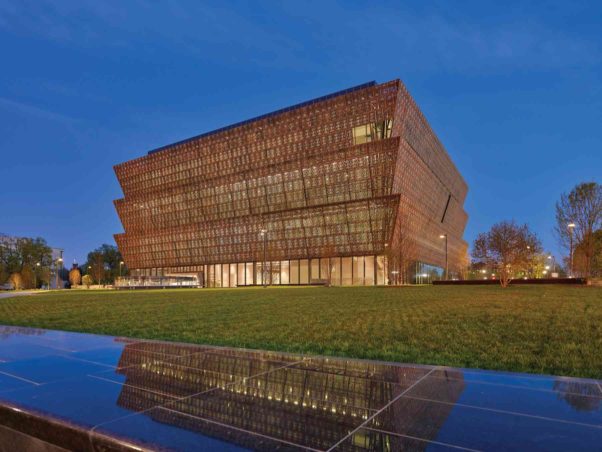 The National Museum of African American History and Culture, the 19th and newest museum of the Smithsonian Institution, opens at 1 p.m. on Saturday. If you already have tickets, you are lucky because the free, timed tickets are gone except for a few weekdays in mid-November and December. If you weren’t lucky enough to snag tickets to go inside the museum, you can still attend the Freedom Sounds Festival with free, unticketed music and dance performances, spoken word, oral-history activities and more. The most notable event is a concert at 6 p.m. Saturday featuring Public Enemy, the Roots and Living Colour. Sunday’s concert features Experience Unlimted, Meshell Ndegeocello and Angelique Kidjo. Food concessions from KBQ Real Barbeque will sell barbecue and soul food, RockSalt will serve po’boy sandwiches and Collabo will have Kenyan curry and Caribbean fare. Beer will also be sold. On Saturday morning, there will be jumbo screens around the museum and Washington Monument grounds to watch the opening ceremonies, featuring President Obama and other dignitaries, which begins at 10 a.m. Large crowds are expected and there will be street closures around the museum and security screenings. Entrances for the festival are at 17th Street and Constitution Avenue NW and 17th Street SW near Independence Avenue.

Sept. 23-25 from noon-5 p.m. with evening concerts Saturday and Sunday from 6-9 p.m. at the National Museum of African American History and Culture, 1400 Constitution Ave. NW. Admission is FREE for the museum and festival, but timed tickets are required for the museum. 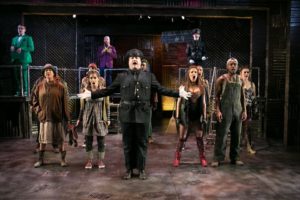 Theatre Week is like Restaurant Week, but instead of prix-fix meals at local restaurants, you’re getting discounted tickets – most are $15 or $35 — to plays at local theaters including the Synetic Theater, Shakespeare Theatre Co., Signature Theatre, Gala Hispanic Theatre, Woolly Mammoth Theatre Co., Olney Theatre Co. and Studio Theatre. Just like the local restaurant week, there are some gems on the list, including Sense and Sensibility at the Folger Theatre, The Little Foxes, which opens this weekend at Arena Stage, and Urinetown at Constellation Theatre Co.

Through Oct. 2 at various times at 34 theaters around the DMV. Tickets range from $6-$36. Check online for a full list of plays and tickets. 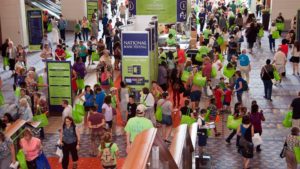 Stephen King, who will discuss his career and new book, End of Watch, in a sold-out ticketed event, is the headliner at the 16th annual National Book Festival. Even if you don’t have a ticket to see the King of Horror, you will find a long list of authors making appearances at this annual Library of Congress event. Salman Rushdie, The Washington Post’s Bob Woodward and Kareem Abdul-Jabbar also will speak on the main stage. Notable writers and personalities on hand to discuss and sign their books include Ken Burns, Jon Meacham, Lois Lowry, Newt Gingrich, Diane Rehm, Carl Hiaasen, Berkeley Breathed, Annette Gordon-Reed, Holly Robinson Peete, Shonda Rhimes, and Sarah Vowell to name a just a few. There will also be two kids’ stages where authors will read from their children’s books as well as activities for kids. A full list of the nearly 120 authors attending and the times of their book signings is available online. 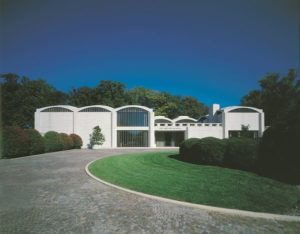 You can visit some of the DMV’s museums that charge admission fees for free during Museum Day Live! Participating museums include Gadsby’s Tavern Museum in Alexandria, the College Park Aviation Museum, Riverside House Museum in Riverdale Park, Md., Dumbarton House, the Koshland Science Museum, the National Building Museum, the National Museum of Women in the Arts, the Newseum, the Kreeger Museum and the Phillips Collection in D.C.

Sept. 24 during regular hours at museums nationwide and 10 in the DMV. Admission is FREE, but you must sign up online and print your passes. 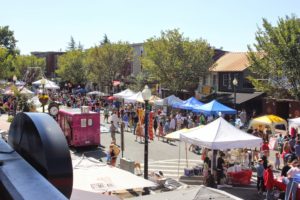 Now in its 16th year, the Barracks Row Fall Festival has something for everyone. For Nationals fans missing the home team, the NatMobile will be out with video games, team gear and live ball toss, while mascot Screech roams the midway. For kids, there will be two butterfly releases and a petting zoo featuring piglets, llamas and lambs. And for the hungry and thirsty, some of the restaurants along Barracks Row — including Belga Cafe and Matchbox — will host a Beer-B-Cue in the parking lot across from Matchbox. After that, you’ll be ready to arm wrestle with the D.C. Rollergirls. Entertainment includes an African drum circle, the Marine Corps Brass Quintet, the American Youth Chorus, performing Jack Russell terriers, Fellowcraft Band, a donkey parade, Batala, a mentalist and escape artist, the Marine Corps Silent Drill Platoon, Chesty the Marine Corps bull dog mascot and more. There will also be tours of the Marine Barracks Washington beginning at the Main Gate at 12:30, 1:30, 2:30 and 4 p.m.

Sept. 24 from 11 a.m.-5 p.m. along Barracks Row on Eighth Street SE between E and I Streets. Admission is FREE!

Speakers at one of last year’s presentation during D.C. VegFest. (Photo: Compassion Over Killing)

After a summer of barbecue, crabs, beer and wine festivals, D.C. VegFest is devoted to a vegan diet. The event dedicated to a plant-based diet has the usual live music and speakers, activity areas for children and dogs along with free vegan samples and food for purchase from more than 40 restaurants and vendors including HipCityVeg, Shouk, 3 Twisted Vegans, Roots Market, Treeline Cheese, Vegan Treats, Busboys & Poets and Tofurky. There will also be more than 70 nonprofit and commercial exhibitors.

Celebrate Oktoberfest at the fifth annual Wiener 500 benefiting the Washington Humane Society. Last year, 96 Dachshunds competed for $500 in prize money. In addition to the races, there will be a costume contest for all breeds, live music from DJ Chris Styles and the Lloyd Dobler Effect, beer and food trucks from Swizzler, Red Hook Lobster Pound and Captain Cookie, a stein hoisting competition and local vendors.

D.C. Beer Week kicks off this weekend with a number of events throughout the city. The big launch party is BrewHaHa at Old Ebbitt Grill, 675 15th St. NW, from 7:30-10:30 p.m. Saturday, featuring 20 local beers paired with dishes from local restaurants. On Sunday from 1-6 p.m., Hopfunk Fest at 3 Stars Brewing, 6400 Chillum Place NW, features hop-forward beers and sours from around the country along with oysters, DJs, cornhole, food trucks and more.

Through Oct. 1 at breweries and bars around the DMV. For a full list of events, visit the website. 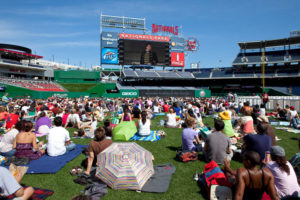 Watch the Washington National Opera perform the Marriage of Figero live at the John F. Kennedy Center for the Performing Arts while lounging on a blanket in your shorts and T-shirt in the outfield of Nationals Park as the performance is simulcast on the stadium’s scoreboard during Opera in the Outfield. (Chairs are not permitted on the outfield. Seating in the stadium is also available.) Pre-opera entertainment on the center field plaza include performances by vocal students from the Duke Ellington School and the Savoy Elementary School dance ensemble. You can also take photos with the characters from the opera and the living statue of Babe Ruth and meet Ms. Brown M&M. The Bugs Bunny cartoon What’s Up Doc? will be shown on the big screen. A kids corner will feature a dress-up trunk, crafts, face painting and a playground. The stadium’s concessions will be open. 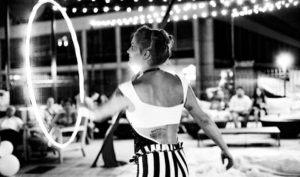 Art All Night on Saturday include Circus of the Night in Shaw.
(Photo: Nuit Cirque)

Art All Night, the annual overnight visual and performing arts festival, features painting, sculpture, dance, music, theater, film, photography, poetry and more. This year it features only local artists performing in indoor and outdoor public and private spaces. It also spreads throughout the city, with attendees getting the chance to see art in all of its forms in seven neighborhoods. For instance, a pre-party from 5-7 p.m. in the 1900-2100 blocks of Eighth Street NW in Shaw features more than 25 aerialists, jugglers, gymnasts and other performers from “Circus of the Night” in addition to art installations and music in businesses along those blocks, while a glow-in-the-dark disco from 9 p.m. at 3130 Martin Luther King Jr. Ave. SE, gives guests 30-minute dance experiences powered by wireless headphones. Dancers can switch between three music channels. There will also be black light body painting and go-go dancers. Also, bands and dozens of artists will take over two large outdoor spaces in the North Capitol area, while musicians perform live on the move on the D.C. Streetcars until 2 a.m.

Yoga on the Mall 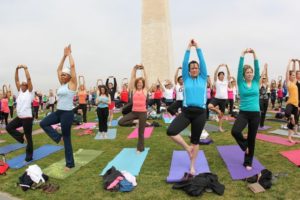 Take part in a group yoga session on the National Mall Sunday near the Washington Monument. (Photo; daveynin/Flickr)

America’s front lawn is a busy place this weekend, so why not have another Yoga on the Mall to cap things off? There will be activities for participants of all ages and levels, plus instruction from visiting teacher Shiva Rea. Because of added security for the weekend’s events, just take your mat. Water and snacks will be provided.

Sept. 25 from 10 a.m.-1 p.m. in the Sylvan Theatre area near the Washington Monument. Admission is FREE, but RSVP online. 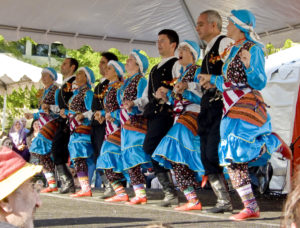 The 14th annual Turkish Festival brings the culture, food and art of Turkey to D.C. Family-friendly activities include live music and folk-dancing — a participatory “Line Dance for Peace” takes place at 2:30 p.m. — and games and crafts for kids. There will also be a Turkish bazar and you can have your fortune read in your coffee grounds at the Turkish-style coffeehouse. 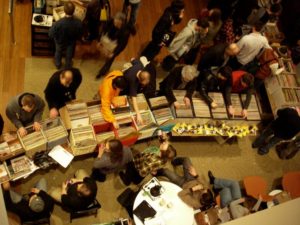 Whether you’re a casual buyer or an enthusiast, there’s no shortage of vinyl to peruse at the semi-annual D.C. Record Fair, which moves to the Howard Theatre. Thirty-eight record dealers from up and down the East Coast far will be selling their LP and 45 collections at the event, which also includes local DJs and bloody marys — two things you won’t necessarily get during a normal record store trip.