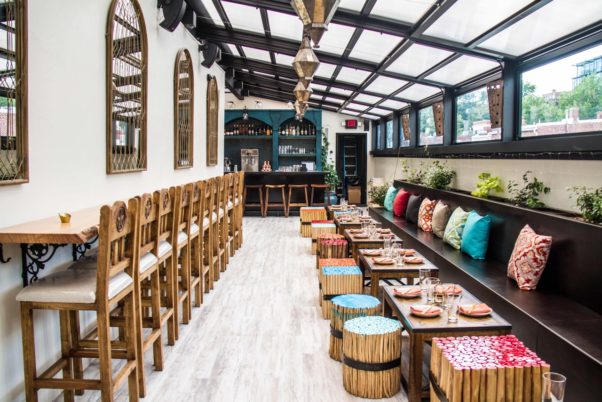 Sakerum, which opens on 14th St. NW on Monday, has a 90-person lounge with a retractable roof on the second floor.
(Photo: Farrah Skeiky)

The two-story, 3,600-squere-foot Asian-Latin restaurant and lounge is modeled on the traditional Japanese izakaya with the flair of a Latin lounge. There are bars on both floors in addition to a private dining space and a 90-person lounge with a retractable rooftop on the second floor.

The interior features textiles from both worlds, combining minimalist Asian sensibilities with whimsical art, found objects and gilded bird cages. Named for two of the most iconic spirits representing both cultures — sake and rum — the elements are used in the rice and sugarcane motifs inside.

“I’ve always loved Asian and Latin cuisines and cultures, so bringing them together to create Sakerum was a no-brainer for me,” said Andreou, whose wife and partner Constandina Economides’ family owned and operated the former Blackie’s. “Sakerum is dedicated to bringing out the best of both worlds and we think guests will appreciate how thoughtfully we have paired these amazing cultures together.” 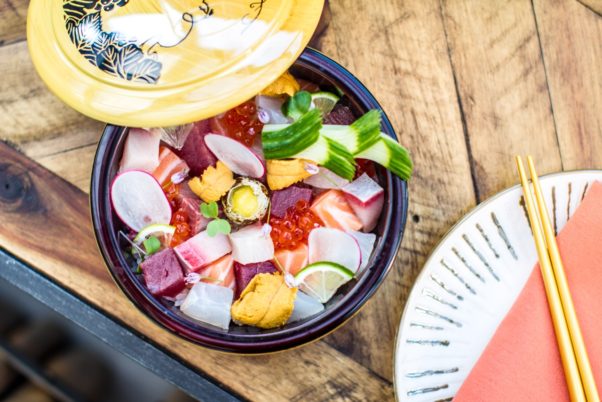 Sakerum’s menu includes sushi and sashimi, along with Latin-inspired Asian dishes offering a blend of flavors and cultures. The colorful sushi bar, located on the first floor, is led by chef Khan Gayabazar. Dishes include the Mar y Tierra Roll made with Maine lobster tail and scorched Miyazaki Wagyu beef, and Yaki Tako, grilled octopus brushed with lemon oil and served with orange-mango picante.

Gina Chersevani of Buffalo & Bergen in Union Market designed the cocktail program, which uses fresh sugar cane for cocktails and drink flights. Drinks include the Wandering Samurai, made with sake, Flor de Cana, yuzu and bitters, topped with 6-piece sashimi, and the Pirates Creed with rum, coconut, pineapple, Yuzu and nutmeg.

Sakerum is open for dinner from 5 p.m.-close daily. Brunch will be added in the fall.

Ocean Blue opened Aug. 15 at 21438 Epicurie Plaza, Sterling, in the Cascades Overlook. The 138-seat restaurant from operating partner John Kushner, who has worked for Patrick O’Connell at the Inn at Little Washington and Bobby Flay at Masa Grill in New York and Las Vegas, features an island-inspired theme and menu with a 48-seat patio. 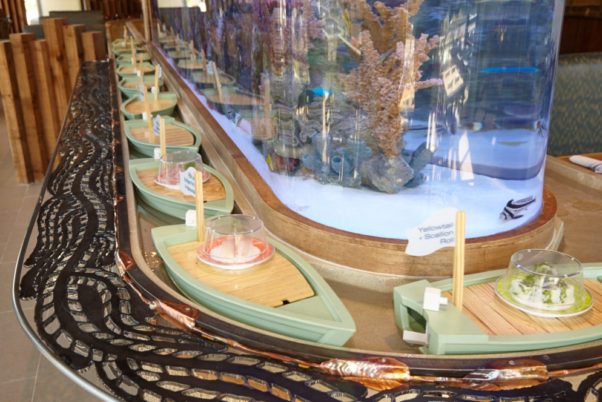 The 4,866-square-foot restaurant has two 3,000-gallon ocean reef aquariums filled with clownfish, starfish and angel fish among other species encircled by a 150-foot water canal with more than 50 skiff boats that carry selections of sushi and sashimi into the dining room.

Executive chef Thomas Abbott’s menu features island cuisine from Jamaican jerk chicken to Bohemian fish tacos and selection of steaks, burgers, poultry and seafood. Diners can take a trip to a ramen bar or enjoy sushi and signature rolls like a Caribbean lobster roll or a Puerto Rican roll. 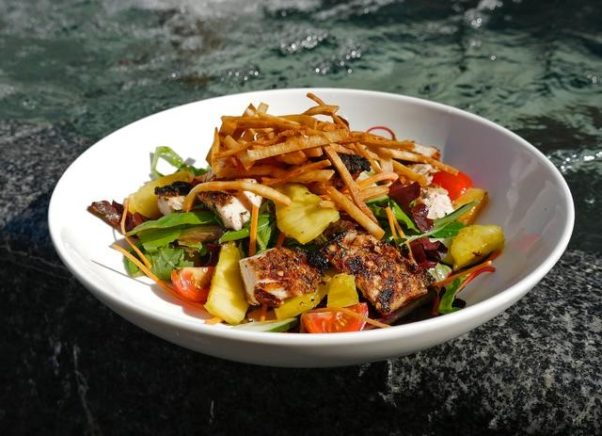 After less than a year, chefs Jonah Kim and Mike Isabella are no longer partners at Yona, 4000 Wilson Blvd., Arlington. Kim has left the Ballston ramen bar and small plates restaurant that bears his name (Yona is the Korean pronunciation of Jonah). 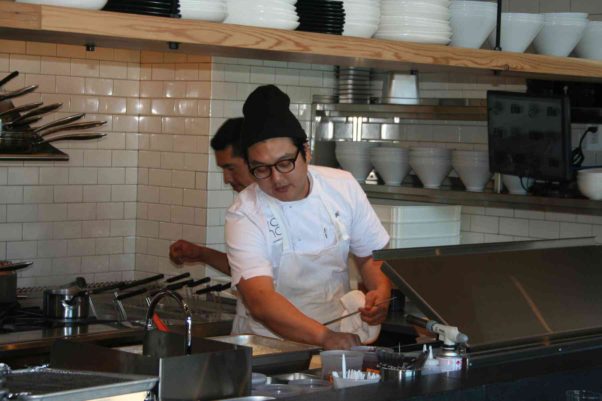 Chef Jonah Kim, shown here in Yona days before its opening, has left the ramen and small plates restaurant in Ballston.
(Photo: Mark Heckathorn/DC on Heels)

The restaurant was a 50-50 partnership with Kim handling the menu and concept and Isabella providing support.

“Not all partnerships work out,” Isabella said in a statement. “This one didn’t and Jonah has parted ways with [Mike Isabella Concepts]. We will continue to develop the concept and menu within our team. I wish Jonah nothing but the best.”

There was no reason given for the or when it happened. Although a spokesman declined to discuss details of the partnership’s status, he said Kim has completely parted ways with Isabella, and all mentions of Kim have been removed from the restaurant’s websites.

Kim has not responded to inquiries, and his late Twitter post was in July. His LinkedIn account still lists him as the chef at Yona. Kim was previously the chef at Pabu, a shuttered Japanese restaurant at the Four Seasons in Baltimore.

Missing from the menu is Kim’s signature uni waffle, although his miso porky ramen and Kim-fil-A chicken sandwiches remain. The rest of the menu has changed significantly, including a heavy emphasis on sushi with maki rolls and nigari, and a sashimi plate. 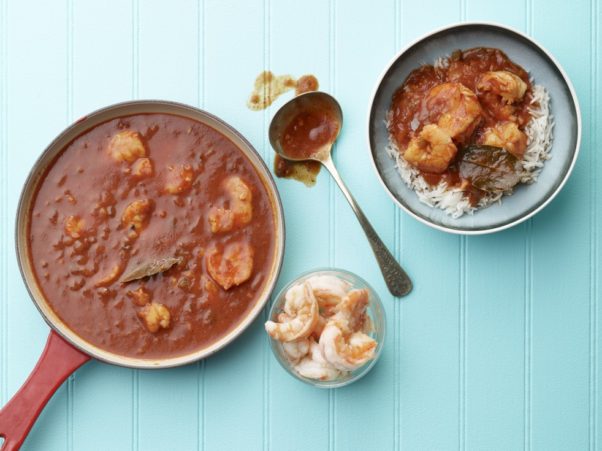 Bayou Bakery is selling a special shrimp creole appetizer this week with 50 percent of the proceeds going to flood victims in Louisiana. (Photo: Renee Comet)

Through Aug. 26, the restaurant will donate 50 percent of the proceeds from a special $9 shrimp creole appetizer to flood victims n Abbeville, La., including owner David Guas’ Aunt Boo, who taught him the fundamentals of his native cuisine staring with a roux and working up to iconic dishes like shrimp creole and who’s house was flooded under two feet of water.

Wear your bathing suit and water shoes to Beuchert’s Saloon, 623 Pennsylvania Ave. SE, for a Tacos & Taps end of summer party from 4-9 p.m. on Sunday, Aug. 21. 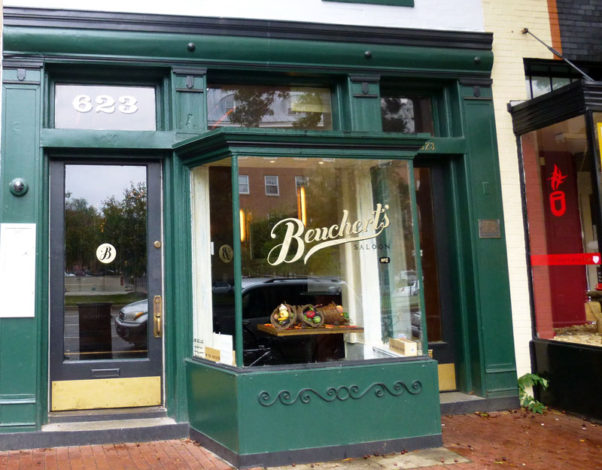 There will be soakers, water balloons, flip cup and five kinds of tacos from Beuchert’s chef Andrew Markert and chef Christian Irabien from La Cocina VA, a non-profit that trains unemployed Hispanics for food service carrers. Graduates receive a certificate in a workforce development program from Northern Virginia Community College.

Food and beverages will be available for tickets that cost $5 each. Items will cost from one to three tickets. Water balloons will be $1 with proceeds going to La Cocina VA. 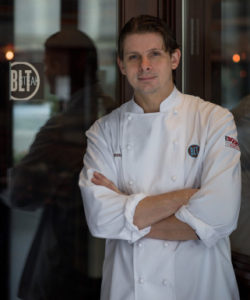 Mark Hennessy is the new executive chef at BLT Prime, which will open in September in the Trump International Hotel in the Old Post Office Pavilion at 1100 Pennsylvania Ave. NW.

Hennessy was chef de cuisine at sister restaurant BLT Steak, 1625 I St. NW, since October 2015. Both are owned by ESquared Hospitality. Hennessy has worked in kitchens from Hong Kong to Sonoma, Calif. He previously opened BLT Steaks in Hong Kong and Scottsdale, Ariz., and worked at Blue Sage and Meritage at the JW Marriott Phoenix Desert Ridge Resort & Spa.

The American restaurant will feature prime-grade steaks and a raw bar. The menu, organized by category, offers a selection of the high-quality dry-aged steaks such as a 16-ounce dry-aged New York strip steak or the new bone-in Bronx filet for two with Red Coat prawns, along with seafood dishes including tuna tartare, grilled branzino and pastrami salmon carpaccio. In addition, Hennessy will feature a blackboard menu that changes weekly as he does at BLT Steak, highlighting seasonal ingredients, local vendors and unique preparations 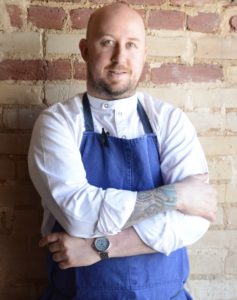 Sharp replaced long-time executive chef Kyle Bailey at the restaurant and bar that features more than 500 beers from Neighborhood Restaurant Group in April.

“It just wasn’t the right opportunity for me right now,” Sharpe told Washington City Paper. “There is no bad blood.”

The Rockville native is returning to the West Coast to work for Michael Mina’s restaurant group. Sharpe previously worked for Mina early in his career at RN74 in Seattle and San Francisco, and Wit & Wisdom and Pabu in Baltimore. He had planned to open Jolene in D.C., but that never happened.

“Nick is talented and we appreciate his work during his stint at Birch & Barley and ChurchKey,” said NRG founder Michael Babin in a statement. “We wish him the best in his next project.”

NRG will start the search process for a new chef.