Turkish-born Hakan Ilhan’s Ottoman Taverna, 425 I St. NW, Suite #107 in Mount Vernon Triangle, opened at the beginning of May, serving classic dishes that incorporate traditional cooking techniques to pay tribute to the flavors of Ottoman cuisine. 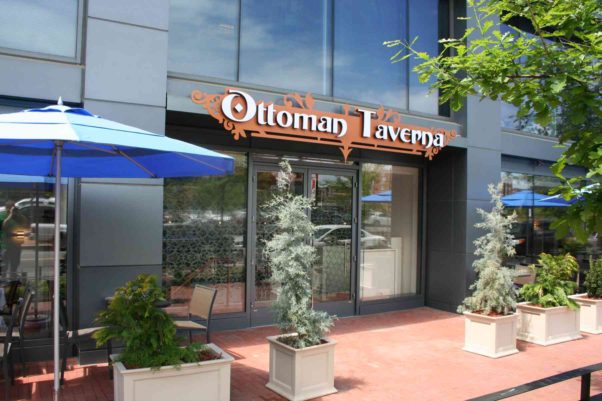 The Ottoman Empire ruled a large swath of Eurasia for hundreds of years. Instead of forcing its way of life onto the conquered, the empire absorbed other ideas and practices to create one of the world’s great cultures. Food was no exception. The cuisine of the Ottomans was influenced by ingredients and techniques found throughout the region, melded into a complex flavor profile that is familiar to all, yet unique at the same time.

The interior of the 160-seat restaurant was designed by Matt Norris of Norris Design and pays homage to the turn-of-the-century casual restaurants found throughout Istanbul. 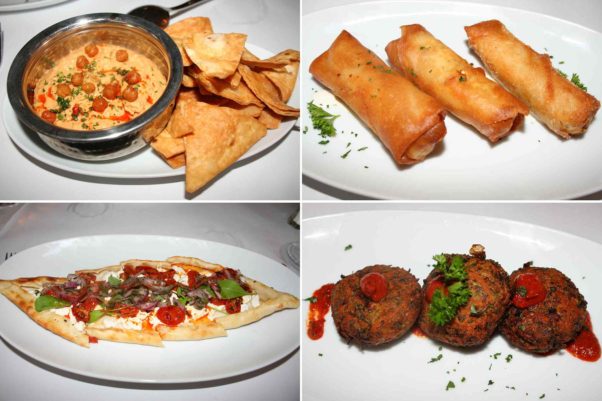 On a recent visit, my guest and I started with some meze including the confit garlic hummus with chickpea, garlic, tahini, paprika and crispy pita chips; sigara böregi, dough wrapped around feta cheese and parsley then deep fried; mücver, pan-seared zucchini cakes with scallions, onions, garlic and dill; and kekikli keçi peynirli pide, a flat bread topped with goat cheese, fresh thyme and oven roasted tomato topped with arugula and marinated red onions.

The flat bread was delicious and tasted like an eye-shaped pizza. The sigara böregi was also excellent and similar to a cross between fried mozzarella inside an eggroll. Think gooey cheese in a crispy wrapper. The hummus was good, but not what I was expecting. Unlike the smooth hummus most Americans are accustomed to, this was chunky with whole chickpeas in it. And while it is served with crispy pita chips, I recommend asking for an order of fresh, warm pitas topped with white and black sesame seeds instead. The pitas and flat breads are cooked in a wood-fired oven in the visible exhibition kitchen. The zucchini cakes were good too, but I wish we had sampled the falafel instead. 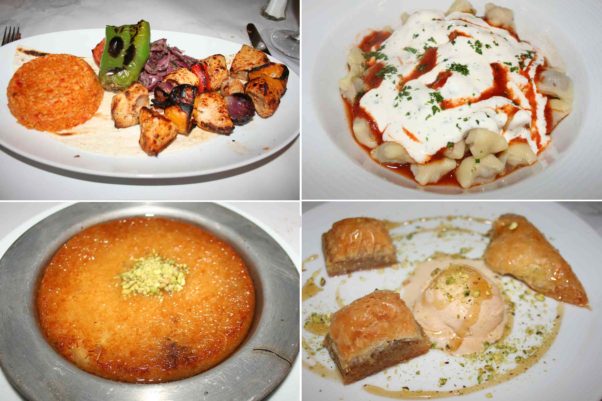 For our entrées, we ordered the tavuk sis, a chargrilled marinated chicken kebab served with rice pilaf and vegetables, and the kayseri mantisi, grandma’s ravioli filled with ground beef and topped with garlic yogurt, dill and paprika butter.

The kebab was tasty with roasted red, green and yellow peppers, tomato and onions. It was perfectly seasoned and cooked on a charcoal pit with a custom copper hood custom made in Turkey for the restaurant. The only thing that would have made it better would have been some tzatziki sauce on the side. The kayseri mantisi, on the other hand, was not to my liking. While I’m sure it was very authentic, it must be an acquired taste. The tiny ravioli was covered in yogurt and dill that gave it a sour taste, more like a pickle and less like ravioli most people in the DMV expect.

When dining at Ottoman Taverna, I suggest you either cut down on the meze or take some of your entrée home because you definitely want to save room for dessert. The baklava was some of the best I’ve ever tasted. The finely layered pasty is filled with nuts and steeped in syrup and served with a scoop of ice cream. A perfect ending to the meal. If you’ve never tried künefe, I highly recommend it. It is melted, unsalted cheese baked between two layers of kadayýf pastry and soaked in anise syrup topped with chopped pistachios. It is worth a stop just for dessert, even if you have eaten at another restaurant.

Diners will also find an eclectic list of wines showcasing Turkey, Greece, Lebanon, Israel, Macedonia, Serbia, Hungary, Slovenia, Croatia and California with more than 20 selections available by the glass priced from $8-13. There are seven beers on tap and another seven in bottles all priced at $8, as well a craft cocktails priced at $14. The bar also features anise-flavored raki, imported from Turkey, ouzo from Greece and Arak from Lebanon.