La Vie to Open in The Wharf Development

Social Restaurant Group, which owns Provision No. 14, The Prospect and Bonfire, will open La Vie, a French-Mediterranean restaurant, at The Wharf, a $2 billion development at the Southwest Waterfront in late-fall 2017. 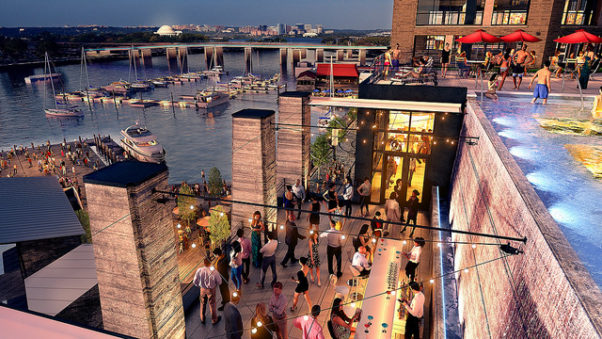 La Vie from the Social Restaurant Group will open at The Wharf in late-fall 2017. (Image: Hoffman Madison Waterfront)

The beverage program will focus on coastal-inspired cocktails and beachside imbibing. Additionally, there will be a large focus on rosé wines, Champagne, house-made sodas, hand selected craft beers and an infused beer and shandy menu.

The menu will feature seafood towers, a moules frites program, sweet and savory tartines, and a menu of brioche burgers, such as a butter-poached lobster, Moroccan-spiced lamb and shrimp avocado burgers all served on warm, house-made brioche buns. A selection of communal offerings will also be available.

Other tenants at The Wharf announced so fat include Del Mar, a two-story Spanish and seafood restaurant from Fabio Trabocchi; Requin, a Mediterranean restaurant from chefs Mike Isabella and Jennifer Carrol; Hank’s on the Water, from Hank’s Oyster Bar’s chef Jamie Leeds; Potomac Distilling Co., a rum distillery and two-story tavern; Rappahannock Oyster Bar in an historic oyster shed at the Municipal Fish Market; Kirwan’s, an Irish pub; Taylor Gourmet; and Dolcezza Gelato. 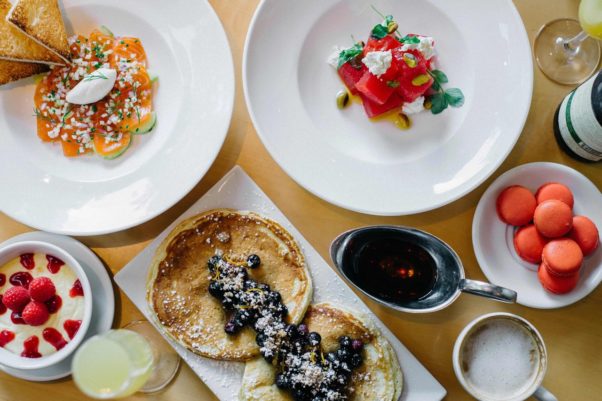 The brunch menu includes new dishes such as yellow tomato gazpacho, cured salmon and scallion omelet with duck confit in addition to longtime favorites like eggs Benedict, chocolate and blueberry pancakes and fried chicken and waffle. For the third course, diners will choose a dessert such as macarons, mousse, sorbet and more. The new brunch menu also features bottomless mimosas, bellinis and Bloody Marys for an additional $15. 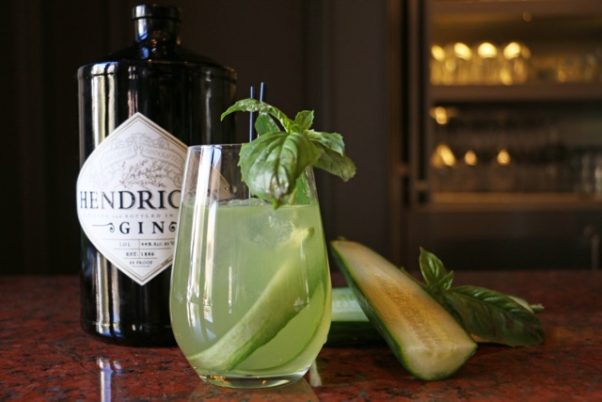 Jardenea Lounge in the Melrose Georgetown Hotel has a new seasonal cocktail menu that includes the cucumber and basil Collins. (Photo: Jardenea Lounge) 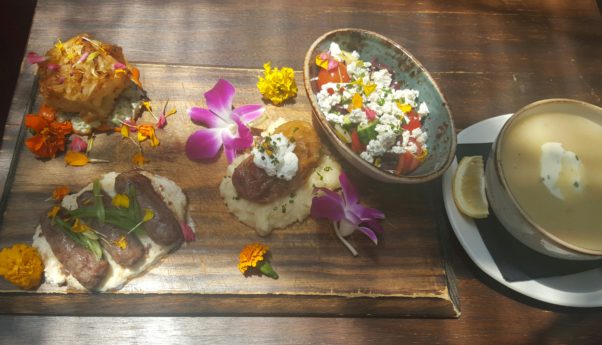 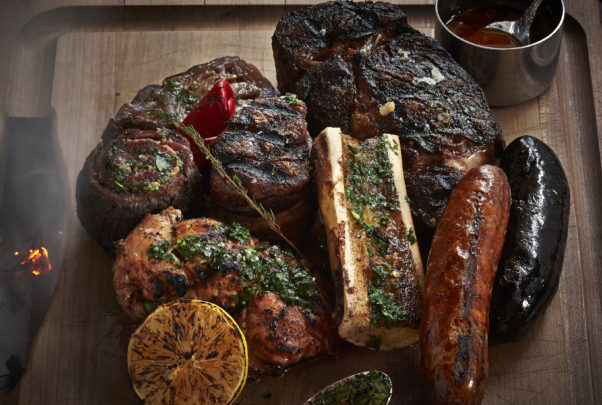 Del Campo’s asado to-go menu has items that can be taken home and cooked on the grill. (Photo: Del Campo)

Available throughout the summer, the menu brings Del Campo’s Argentinean asado experience from the restaurant to backyard cookouts with a variety of packaged and a la carte options available to go and ready to cook on the grill.

Orders must be placed 24 hours in advance.

Pan-Latin steakhouse Toro Toro, 1300 I St. NW, has a new late night dinner menu available Sunday through Thursday from 11 p.m.-1 a.m. and on Friday and Saturday from midnight-2 a.m. 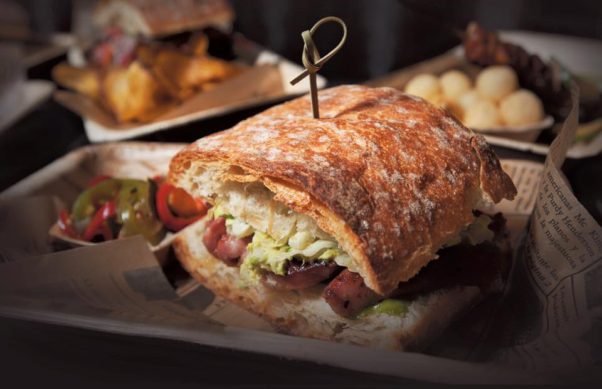 Toro Toro is serving a new late-night menu including this classic choripán with sweet Argentinean chorizo on a ciabatta roll. (Photo: Toro Toro/Facebook)

Guests can show off their dance moves in the restaurant’s 5,000 square-foot lounge where a DJ will spin Latin, house and top 40 hits on Fridays and Saturdays from 10 p.m.-3 a.m.

The menu launched last week in the tasting room, spirits library and punch garden. The new drinks are inspired by the heritage, lives and travels of the bar’s staff.

The drinks incorporate a wide array of spirits including singani, pisco, rum, chichaa and Chilean wine paired with fruit and vegetable ingredients such as guava, banana, iceberg lettuce and passion fruit.

The tasting room’s three- or five-course tasting menu features five new summer cocktails, including the Coctel de Tamayo made with singani, scotch, dry curaçao, banana, passion fruit, orgeat, cane sugar, lime juice and black-lemon bitters. In the spirits library, the We Came for the Gold is a mix of miso-infused pisco, ginger-lime cordial, honey, maraschino liqueur and red shiso leaf. In the punch garden, the bottled Jote is made with Chilean wine, citrus oleo syrup, amaro ciociaro and sparkling mineral water topped with a lime wheel and seasonal berries.

The new summer menu will is available until mid-September.

Palette 22, 4053 Campbell Ave., Arlington, in the Village at Shirlington has introduced a new “Palette Passport” program. 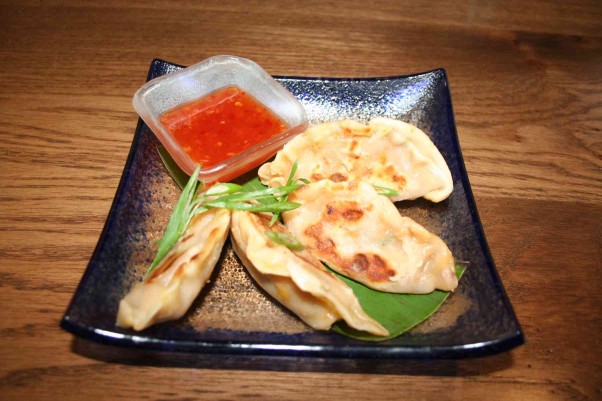 Priced at $25 per person, the program showcases a rotating selection of three to four plates per guest, including dessert, of the chefs’ favorite internationally-inspired dishes and regional foods from around the world during dinner service from 4 p.m.-close for parties of six or more.

The program highlights dishes from the snacks, meat and seafood, brick oven flatbreads, tacos and sliders, and sweets section of the menu.

Chefs team up for Poppy’s Pop Up dinner series

Chef Andrew Markert of Beuchert’s Saloon is teaming up with pastry chef Jennifer Costa formerly of Centrolina for a pop-up, outdoor dinner series this summer. Poppy’s Pop Up is a series of six dinners with each having its own theme. 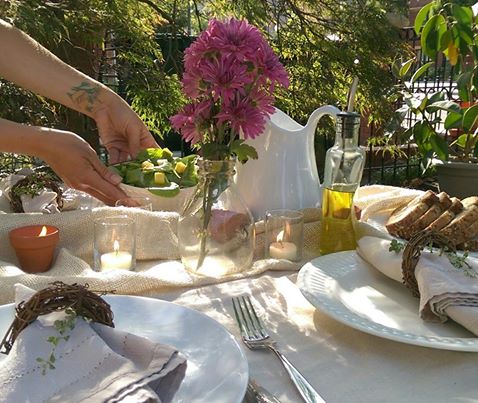 The first dinner highlights the bounty of Sonoma County, Calif., at 8 p.m. on Thursday, July 7. A portion of each ticket will benefit a different non-profit organization. The first dinner benefits Mary’s Center.

Costa came up with the concept to honor her late grandfather who was nicknamed Poppy and because the state flower of California is the poppy. The two chefs became friends during their time at Johnson and Wales University. She will prepare the dessert while Markert supplies the savory portion of the family-style dinner. Surprise guest chefs and mixologists will contribute to the series.

Each event consists of a three-course, family style meal paired with beverages and a small take-home surprise. Other dinners will be held on July 21, Aug. 11, Aug. 25, Sept. 8 and Sept. 22. Dinners will be held at an undisclosed location Guests will receive an email the morning of the dinner with the location and directions.

Tickets are $95 per person. Thursday’s dinner is limited to 20 diners with subsequent dinners limited to 40 diners. Tickets can be purchased online.

Lonnie Zoeller, formerly executive chef of Vinoteca and The Royal, has been named the new executive chef at Policy restaurant and lounge, 1904 14th St. NW. 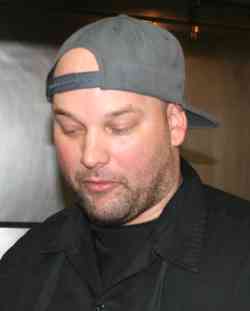 Lonnie Zoeller, formerly of Vinoteca and The Royal, is the new executive chef at Policy.
(Photo: Mark Heckathorn/DC on Heels)

Zoeller also launched social nights, a two-hour rooftop patio package for 12-24 people that offers gourmet picnic-style cuisine served along with seasonal punch bowls and beverages. Picnic items include a pimento style cheese spread, corn on the cob with smoky garlic butter and a sausage platter with charred peppers, onions and chimichurri sauce. It is hosted on the restaurant’s newly renovated rooftop patio.

Prior to Vinoteca, Zoeller worked at Zaytinya. He began his career as a dishwasher and line cook at a local restaurant as a teenager. After graduating from the Culinary Institute of America in Hyde Park, N.Y., he worked at various restaurants in the Northeast, including as a sous chef under James Beard Award-winning chef Sam Reda at Buffalo Chophouse in Buffalo, N.Y. He also spent six years cooking at Els Casals restaurant in Sagas in Northern Spain.