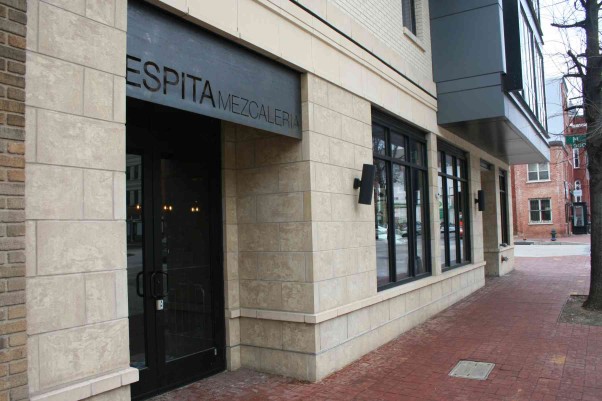 The 88-seat restaurant located across from the Walter E. Washington Convention Center specializes in the flavors of Oaxaca with seven styles of mole and tortillas hand-ground from heirloom masa. A collection of sopes, ensaladas, fundidos, tlayudas, tacos and ceviches are also available.

The restaurant’s 62-seat L-shaped dining room features two murals by Oaxacan political graffiti artist Yescka. The Phillips saw the artist’s street art all over Oaxaca when they were there studying mezcal. Phillips found Yescka online and emailed, asking to purchase one of his pieces to have a local artist recreate. But instead, Yescka offered to come to D.C. and paint it himself in exchange for expenses. One mural depicts Monarch butterflies (natural immigrants) flying between a young girl and a skeleton (political corruption) holding a flower. “It is Yescka’s interpretation of the state of modern immigration,” Phillips explained. The other mural is of artist Frida Kahlo with a Mohawk. 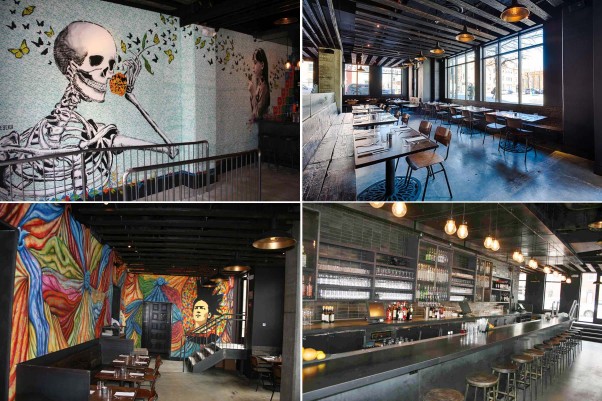 The interior of the restaurant is industrial with concrete floors, exposed beams and piping, faux-reclaimed wood banquettes, actual classroom chairs and tables made from sections of an old floor. There is additional seating for 16 at the wood and metal bar and 10 more on barstools at the dining rail facing Ninth Street. In warmer weather, there will be a 44-seat patio.

The menu from executive chef Alexis Samayoa, formerly chef de partie at WD-50 in Manhattan, sous chef at Txikito and chef de cuisine at Empellón Taqueria, features hand-pressed tortillas and seven kinds of mole. The restaurant will import about a metric ton of Oaxacan heirloom corn each week. At 10 p.m. each night, workers will soak and boil the corn. Then at 5 a.m. each morning, cooks will grind, season and press the cornmeal into small discs for tacos, tortilla chips, sopes — mini tartlets filled with eggplant or short rib — and tlayudas, large tortillas mixed with black beans and topped avocado or crab and other toppings. Tacos, which come in orders of two or three, range from $10-$22 depending on the toppings, which include skirt steak, grilled tilapia, Maitake mushrooms, lamb barbacoa and smoked pork jowl. Tlayudas are $10 for avocado and $13 for crab, and sopes are $11 for eggplant and $13 for short rib.

The menu also includes classic guacamole, six salsas made with fresh local chiles and dried chiles imported from Mexico such as pistachio with roasted tomatillo, macha with peanuts and borracha with mezcal and roasted tomatillo. Guacamole is $11 and salsas are $3 each. Both come with chips. There are also five kinds of ceviche priced from $15-$17; salads priced from $9-$12; fundido, melted chichuahua cheese served with tortillas for $10-$11; and sides including elote, arroz rojo, black beans, plantains, yucca and shishito peppers priced from $3-$6. Dessert includes tres leches cake or rotating Mexican cookies.

Espita currently has 85 mezcals that Phillips, a self-described mezcal nerd, has collected. Mezcal is an alcohol made from the agave plant in eight states in southern Mexico. It has an alcohol content between 36-55 percent and is distilled twice, Phillips expained. The mezcal menu lists the year each was made, the alcohol content, where it was made, the manufacturer, the kind of still used and flavor notes. Mezcal is available in 1-ounce pours served in a copita, or little black clay cup; 2-ounce pours served in a veladora, a short candleholder traditionally manufactured by the Catholic church in Oaxaca; and 6-ounce pours come in apothecary bottles to share. All are served with orange slices and spiced salt. They can also be sampled in flights of three, which will change monthly.

Beverage director Megan Barnes, formerly of Columbia Room, has put together nine cocktails, several of which feature mezcal and range from $10-$13. There are even highballs on draft. The bar also stocks local and Mexican beers priced from $5-$8; and 10 wines priced from $10-$16 by the glass and $30-$48 by the bottle. There are also non-alcoholic agua frescas and horchata priced at $5, and Mexican Coke, Mexican Sprite, Grapefruit and blood orange sodas (but no sugar-free soda) priced at $3.