Texas Jack’s Barbecue, the DMV’s newest barbecue joint, opened in Clarendon in early December. The restaurant offers traditional dishes like brisket, ribs, pulled pork, chicken and sides with a hint of both Mexican and German influences. 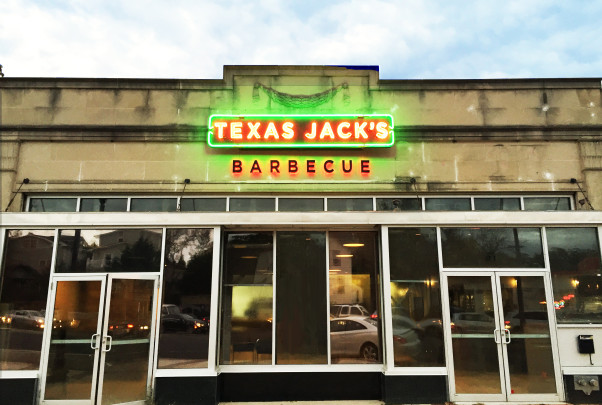 The pitmaster is Matt Lang, a former sous chef at Hill Country Barbecue and winner of Best in Smoke on Food Network. He was also the pitmaster at Fette Sau BBQ in Wiliamsburg, N.Y.

Despite its name, the restaurant does not serve Texas-style barbecue. The restaurant is named for “Texas Jack” Omohundro from Virginia who was a Texas cowboy, scout, teacher, journalist and actor who was in movies with “Buffalo Bill” Cody. The meats, which are smoked, come spiced rather than sauced and arrive at the table naked. Sauce is delivered on your tray, although there’s only one kind. The brisket and ribs are seasoned with salt and pepper, and the ribs also get spritzes of bitter orange juice. The pulled pork is coated in a paste made of achiote peppers, coriander, cinnamon and other spices.

On a recent visit with a friend, Lang’s barbecue was top notch. From the dining room you can see the open kitchen, and the two huge smokers are front and center. The balance between the flavor of the meats and smokiness were perfect. 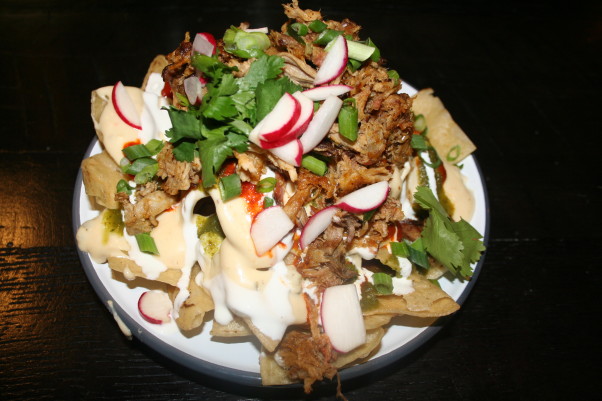 The nachos with pulled pork are delicious. (Photo: Mark Heckathorn/DC on Heels)

We started our dinner with the two-door ’87 Cutlass Supreme nachos with pulled pork shoulder, radishes, white queso, creama, cilantro, salsa verde and salsa roja. This was a huge plate of nachos and pulled pork definitely made to share. I could really taste the queso, and the mix of salsas added a nice kick. This was definitely one of my favorite dishes of the night.

Everything on the menu is ordered a la carte, making it easy to build a platter. You’ll get some slices of store-bought potato bread, that you should skip, and delicious house-made Sriacha pickles. There are sampler platters for two or four on the menu, if you can’t decide. The two-person sampler comes with half a pound of brisket and half a pound of pulled pork with a choice of two small sides for $30, while the four-person samplers includes three-quarters of a pound of brisket, four ribs, a quarter chicken and three small sides for $60. 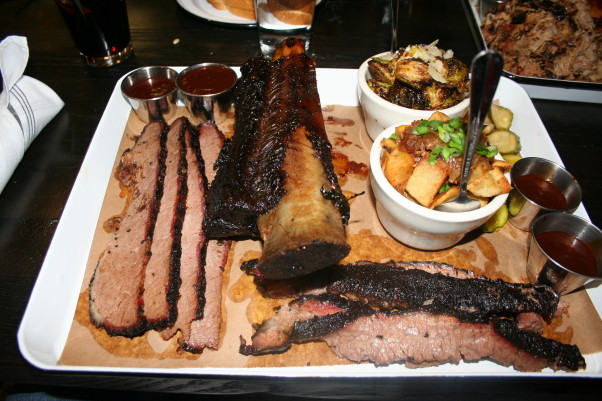 We ordered a little bit of all the meats to share, but be warned: one-third to one-half pound of a few is enough for a single person. We didn’t find that out until after our food had arrived, so we ended up taking plenty home.

My favorite was the beef brisket ($22/pound), which was melt-in-your-mouth tender. It wasn’t as smoky or red-tinged as some restaurants serve, which was a real plus in my book. It definitely let the meat be the star instead of the smoke. The pulled pork ($18/pound) was also excellent, with caramelized crispy pieces chopped in.

The St. Louis-style spare ribs come individually ($4.75), in a half rack ($23) or a full rack ($45). As I said, all the meat is served naked, but this was one meat that I definitely wanted sauce on. My preference is baby back ribs slathered in a sweet sauce. Unfortunately, the one thing I really disliked at Texas Jack’s was the sauce. It is some house-made concoction that tastes like ketchup and vinegar. It definitely needs to be sweeter, with maybe some honey and brown sugar added in.

The beef short rib, was anything but short. While most restaurants usually serve them cut into pieces, Texas Jack’s serves them whole. They look like something from the Flinstones. The short ribs are $31/pound, but the one rib we were served weighed in at 1.9 pounds. You could have fed a family of four and their dog with it. It was cooked perfectly and the meat fell off the bone.

The chicken comes in quarters (white, $8.50, dark $5), half (white, $17; dark $10; mixed, $13.50) and whole ($26). My chicken, despite being dark brown on the outside from the smoke, was white inside and not overly smoky. It was, unfortunately, dry. The one dish neither of us like was the habanero charro sausage ($6/link) from MeatCrafters in Landover. It is made with pork, habanero and queso blanco, but it had too much habanero and the texture was a bit off. 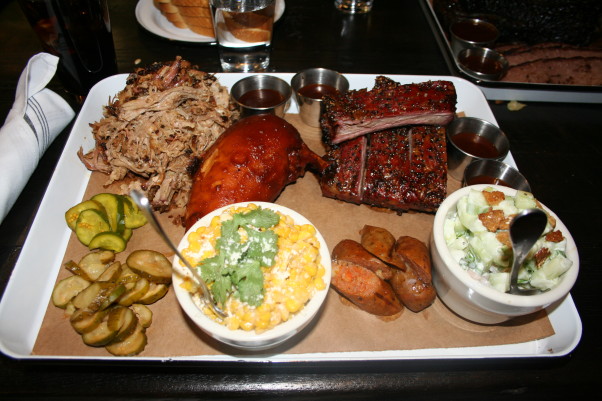 The esquites – a Mexican dish of pan-fried corn, mayo, cojita cheese, cilantro and jalapeno – is a standout. The crispy Brussels sprouts with lemon juice, olive oil and parmesan are also delicious, and the smashed cucumbers (more like chopped) with Greek yogurt, lime and jalapeno honey is refreshing. The crispy fried potatoes with warm bacon vinaigrette was also tasty. We hear mac and cheese and cornbread may be on their way.

Texas Jack’s also has sandwiches ($8-$11) including a brisket sandwich with fried egg, friend onion and queso, a fried chicken sandwich with a chicken breast soaked in buttermilk and hot sauce, deep friend with a vinegary, spicy cayenne sauce and served with coleslaw and Sriracha pickes and a pulled pork sandwich with slaw and pickles. If you are vegetarian, Texas Jack’s has plenty of options too (Lang’s wife is vegetarian) include a meat-free burger made with quinoa, chickpeas, wheat berries and porcini and shiitake mushrooms. 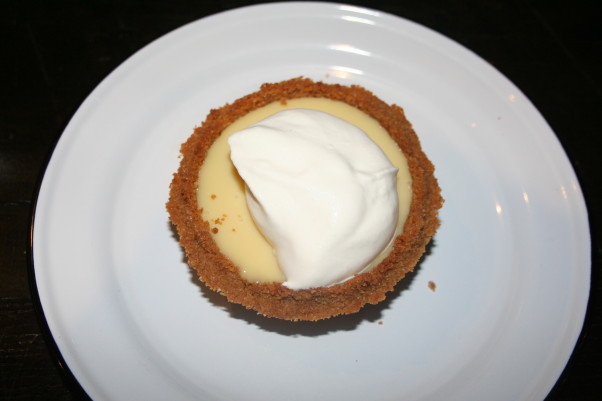 There are three 4-inch pies on the dessert menu, all made by Livin’ the Pie Life and priced at $7.50: Wendy’s key lime pie, salted caramel chocolate chess pie and boozy toasted pecan pie. The menu says each pie serves two, but although they weren’t big, the key lime was just the right size for us to share after filling up on meat.