Created by chef Ivan Zivkovic, the new open-face sandwiches are gluten-free and made with Danish rye bread topped with Balkan ingredients. Zivkovic explained that Ambar’s owner fell in love with the sandwiches when he was visiting Copenhagen, Denmark, and decided to bring them back to the DMV.

There are a wide range of sandwiches for everyone including vegetarians, carnivores and fish-lover with selections such as the artisan mixed meats with pork neck, beef prosciutto, spicy salami, urnebes spread, goat cheese, pickled vegetables and radish; the fried chicken with almond, walnut and apple wasabi, slaw mescaline mix, lemon vinaigrette and celery; the marinated shrimp with ajvar spread, arugula, lemon vinaigrette, blue cheese and crispy prosciutto; the smoked trout with beet carpaccio, cucumber, dill, mayo and pickled jalapeno; the wild forest mushroom with herb roasted mushrooms, baby arugula, horseradish dressing, hardboiled quail egg and red onion; and the crispy cheese with smoked gouda, organic slaw, tartar sauce and ajvar emulsion. Sandwiches range from $5-$8 or you can order two open-face sandwiches and a glass of house wine, a beer, freshly-squeezed lemonade with rosemary or berries, a house-made ginger beer or house-made concord grape soda with tarragon for $16. 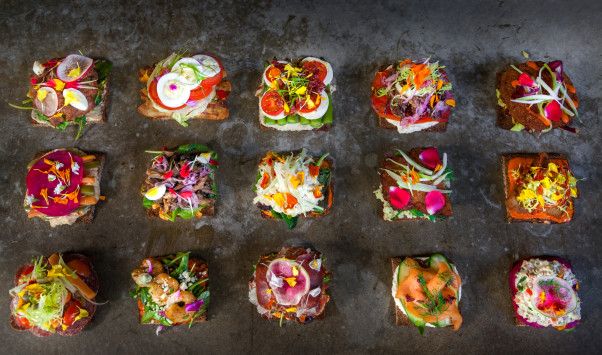 The new lunch menu also includes signature salads like the spinach salad with fried chicken made with organic baby spinach, celery, carrots, cherry tomatoes and horseradish dressing or the mixed green salad with shrimp, roasted squash, caramelized red onion, roasted peppers and pomegranate dressing. Salads are priced from $8-$11 or you can order a salad with the same selection of drinks from above for $13.

A cup of soup and dessert can be added to the specials for $5 more. The two seasonal soups currently on the menu are veal soup with root vegetables and crème fraiche and zucchini soup with potato and sundried tomato. Separately, they are $3 for a cup or $5 for a bowl. The two desserts, priced separately at $5 each, include three chocolate cake with milk chocolate, white chocolate, dark chocolate, mascarpone and strawberry yogurt; and Capri cake with fresh raspberries, vanilla pudding and dolcela hit icing 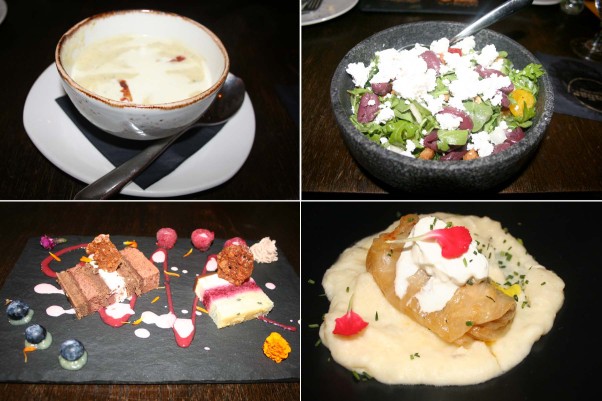 During a visit last week, a friend and I checked out the new lunch offerings, sampling a little bit of everything. We started with the zucchini soup, which reminded us of broccoli-cheddar soup. All the ingredients were pureed into a thick, creamy soup that is perfect for a cold fall day. It was tasty and one of the best item on the lunch menu. We followed that with traditional stuffed sour cabbage made with pork belly, cabbage juice and jasmine rice served over mashed potatoes with yogurt ($11) that the chef sent out. This reminded me of the stuffed cabbage or pigs-in-a-blanket my mother used to make when I was a child, although she didn’t use pickled cabbage and cooked her’s in tomato juice. I must say, of all the dishes we tried, this is the one I’ll be going back for.

We then sampled the open-face sandwiches, ordering the artisan mixed meats; the Vienna schnitzel with a crispy veal patty, ajvar emulsion, frisee salad, tartar sauce and sundried tomatoes; the crispy cheese; and the wild forest mushrooms. The sandwiches are all very beautiful, served on pieces of slate and topped with edible flowers. Some of the toppings are served warm, others cold. 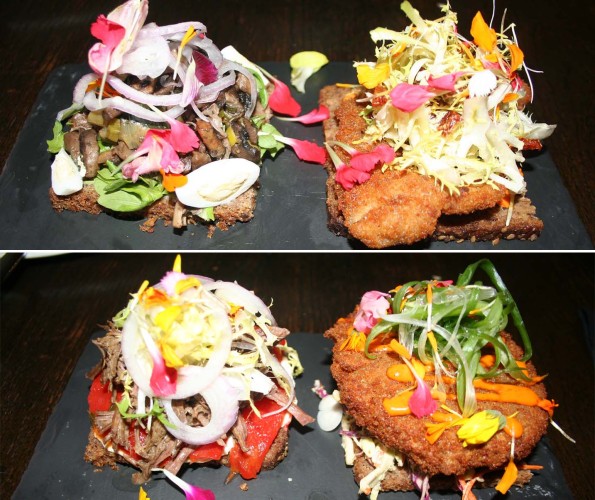 All were very tasty, although tiny. You’ll need to order two or three to fill you up. However, I didn’t care for the bread, which I thought was too dry. It reminded me of those tiny, dark, square slices of party rye bread people serve hors d’oeuvres on at the holidays. I also have found that every gluten-free bread I’ve eaten has been on the dry side. Open-face sandwiches were served during the Middle Ages on thick slabs of course bread called tranches or tranchers, which were used as plates. At the end of the meal, the food soaked trancher was eaten by the diner, feed to the dog or saved for beggars. This thinly-sliced rye bread could certainly not serve as a plate.

We also ordered the Balkan salad ($11) with arugula, cucumber, cherry tomatoes, onion, red and yellow peppers, cow cheese, crouton and cherry vinaigrette. General manager Uroŝ Smiljanić explained that Balkans serve the simple salad as a side dish with most meals. It is made with whatever fresh vegetables they have in their gardens at the time, but always include the cow cheese, which is crumbly and similar to feta. Ambar serves it in an entrée size. The salad was tasty, but a bit salty with the cow cheese and Kalamata olives, which weren’t listed on the menu.

We finished with both desserts. These too are tiny, although beautifully presented on the slate with fresh raspberries, blueberries and flowers. My favorite was the Capri cake, which was lighter, although I’d probably skip dessert on future visits.True chocolate diehards, however, will love the three chocolate cake.

Ambar also introduced Session lunch cocktails, created by brand mixologist Rico Wisner. The drinks have lower alcohol levels, with a one-ounce pour of the featured spirit, for daytime enjoyment. They include a Belgrade Mule with plum rakia, house-made ginger beer and lime; the Pear Daisy with pear rakia, triple sec, lemon, pear and cardamom puree; the Pomegranate Collins with vodka, pomegranate, lemon and soda; and the Grappa Smash with grappa rakia, lemon, mint and soda. All are priced at $6.