Brothers Arthur and Jared Ringle opened DC Harvest, 517 H St. NE, on Sept. 2 serving a hyper-local, seasonal modern American menu with most of the food coming from within the Chesapeake Bay Watershed. 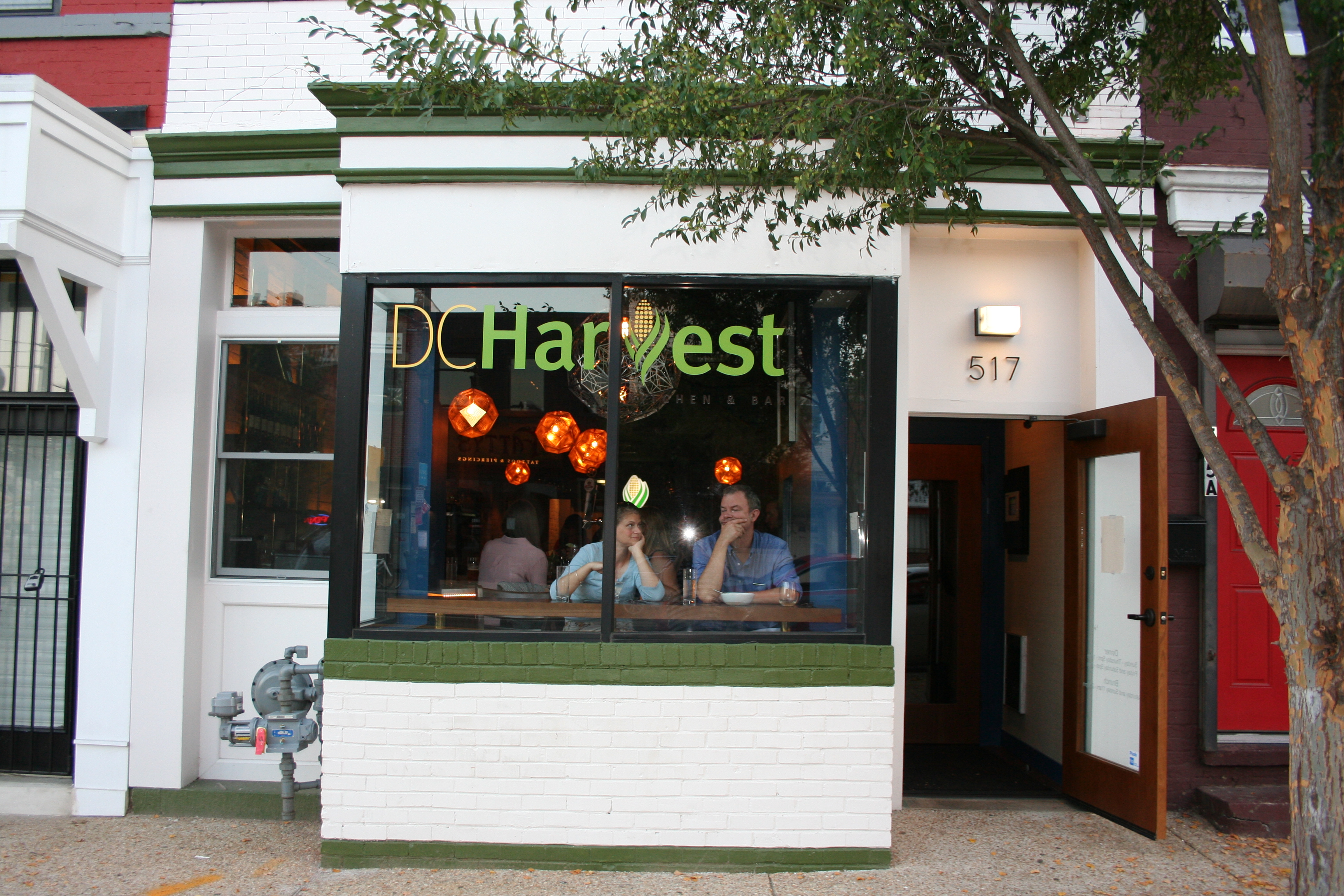 Nothing, except coffee and spices, comes from outside the U.S. including beer, wine and liquor, executive chef Arthur Ringle told DC on Heels during a recent visit. Most of the ingredients are locally sourced from states from New York to Virginia and from West Virginia to Delaware. In fact, during our dinner we had the last of the peach semifredo, which would be replaced with a grape semifredo the following night.

“It has been a long two years of hard work for us to get DC Harvest open,” Arthur said. “I am so excited to get into my new kitchen and get cooking. The quality of the local products coming from our area farmers and fishermen is at its peak right now.”

Arthur, who has more than 15 year in the food industry, started his culinary career as chef de cuisine at Todd English’s former Olive’s restaurant in D.C. after graduating from the Culinary Institute of America in Hyde Park, N.Y., in 1999. He also worked most recently as chef de cuisine at Hank’s Oyster Bar in Dupont. He was executive chef of Napoleon Bistro and Café Bonaparte in D.C. from 2008-2009 and executive sous chef at BLT, chef Laurent Tourondel’s first steakhouse outside of New York City, from 2006-2008. He also was executive sous chef at Vermillion in Alexandria and Dino in downtown D.C., and sous chef at Vidalia from 2004-2006. 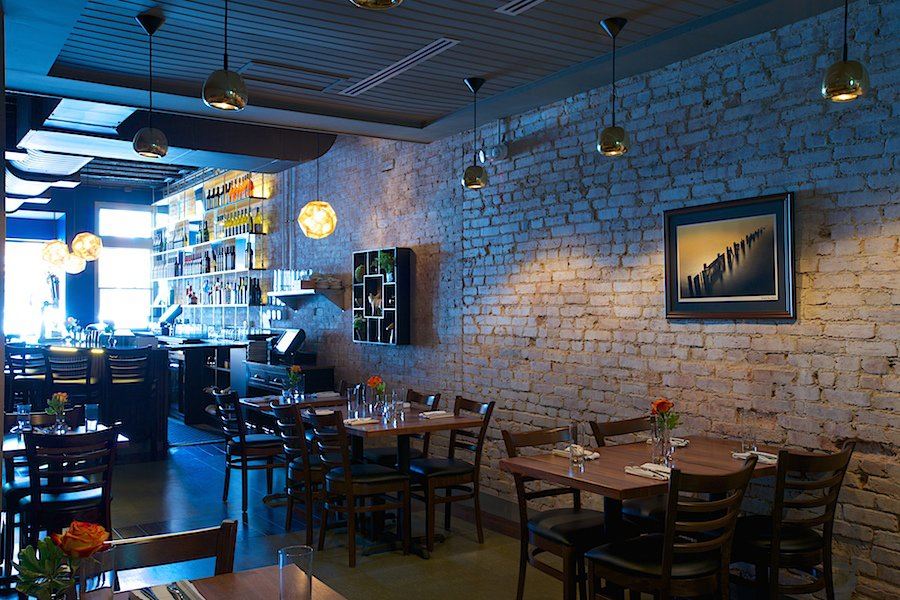 DC Harvest’s modern farmhouse décor was designed by Edit Lab at Streetsense. It is rustic yet casually contemporary with a 10 seat, Carrera marble-topped wooden bar on the street level, an open kitchen and dining area on the second floor, reclaimed fireplace on the second floor, wooden tables and chairs made from local wood, wooden beams (some original), and whitewashed exposed original brick on both floors. The restaurant seats 50 on the two floors. There are also wooden floors and brass fixtures

During our visit last week, I was impressed by our server who knew the ever-changing menu inside and out. He was able to explain all the menu items, how they were cooked and even asked questions about our tastes before making his recommendations. 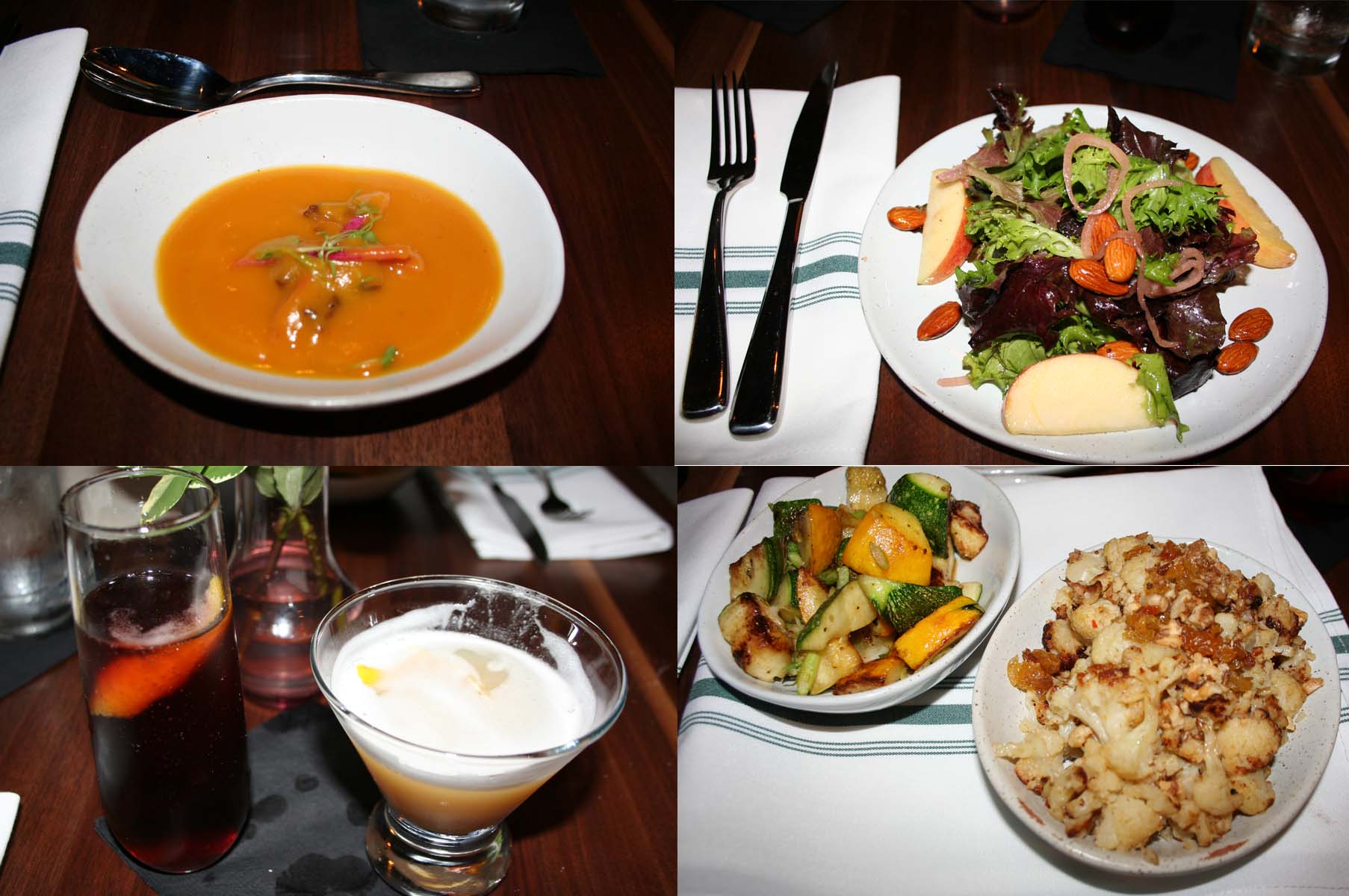 Appetizers and side include sweet potato and apple cider soup (clockwise from top left), market greens salad, sautéed zucchini with scallions and Sicillian cauliflower, and cocktails made from domestic ingredients. (Photo: Mark Heckathorn/DC on Heels)

Every dinner begins with complimentary butternut squash chips that are sweet and salty, similar to sweet potato chips. We started with the sweet potato and apple cider soup with crispy pork belly, micro celery and radish ($7) followed by the market greens salad with gala apples, smoked almonds and pickled shallots ($7). Both were tasty with the apple cider adding a twist to the soup and the apples adding a fall crunch to the salad.

I chose the pan-roasted scallops ($25) with green beans, mushrooms, scallions and chili for my entrée. The five scallops were a good size and cooked to perfection. My guest chose the nightly special of sous vide Old Bay friend chicken with veggie slaw ($24). Each night there is a special every night but Friday: Monday and Tuesday is the fried chicken; Wednesday and Thursday is smoked, braised brisket with sautéed zucchini ($23); Saturday is grilled tavern stead with farm salad and spicy steak sauce (market price) and Sunday is whole wheat pappardelle with Bolognese ($19). Unfortunately, my guest’s chicken leg was still pink inside. While the slaw was tasty and he liked the Old Bay seasoning, he didn’t want to risk eating undercooked chicken, he sent it back and ordered the grilled tri-tip steak ($24) with salsa verde, Brussels sprouts and fingerling potatoes. The second dish came out cooked a perfect medium and the Brussels sprouts were crispy and delicious. We also tried the sautéed zucchini with scallions ($5) and Sicillian cauliflower with walnuts ($5) 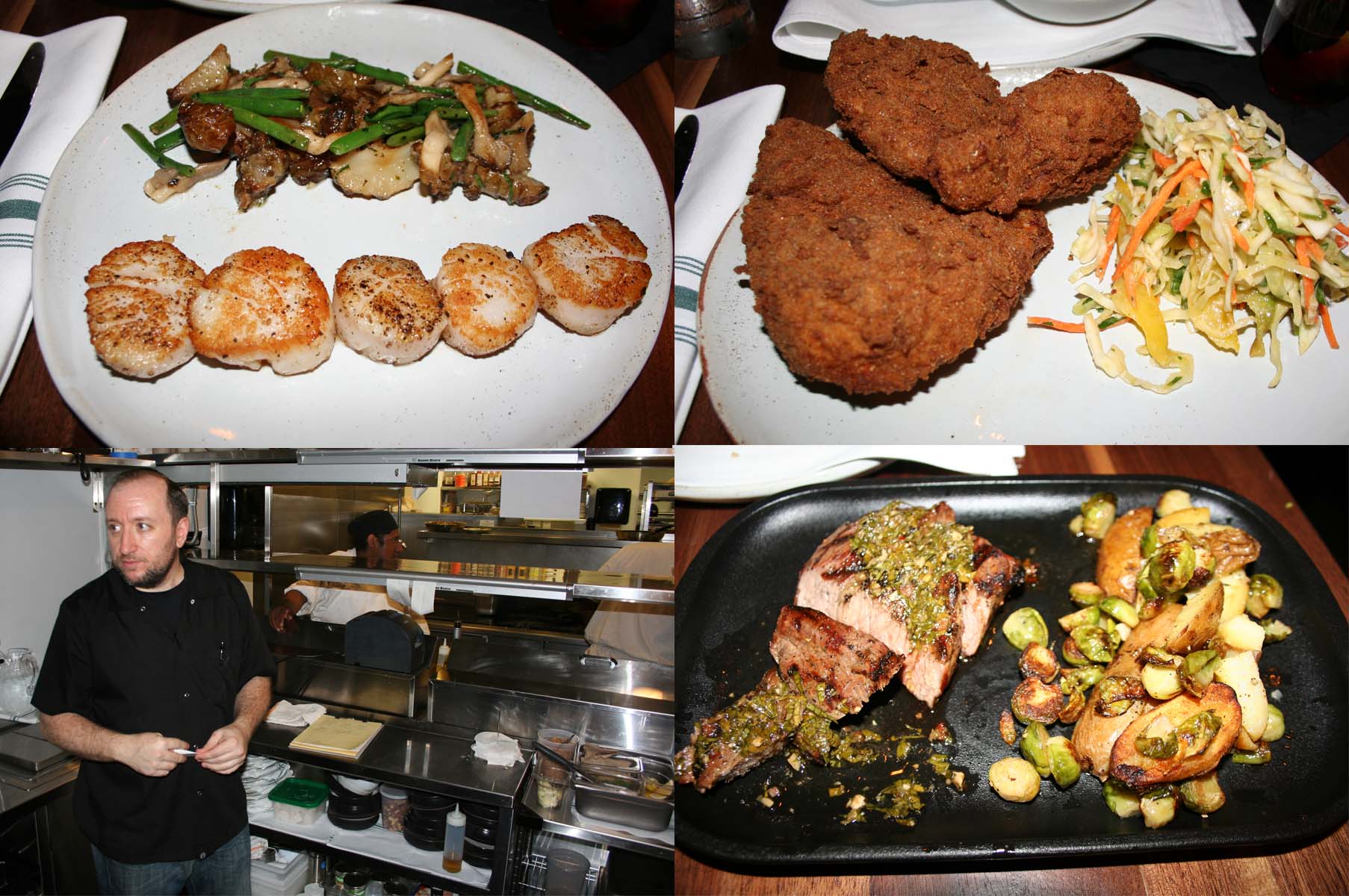 For dessert, we went with the peach semifreddo with butterscotch cookies ($7) and the s’mores pot du crème with caramel, bruleed marshmallow and graham crackers ($8). Both were good, but the pot du crème was my favorite.

With an ever changing seasonal menu, you’ll want to keep going back to see what is on that night’s menu. We can’t wait to see what Arthur comes up with for side dishes during the winter months when local fresh produce is hard to find.