Kids Should Avoid a Caffeine Buzz

If you think you’re seeing more kids chugging energy drinks and sipping Starbucks than ever before, you’re probably right.

While there is no hard data to support the whole “coffee will stunt your growth” line that grownups have been using for years, there is concern about what the effects might be of this increased caffeine consumption among young people. 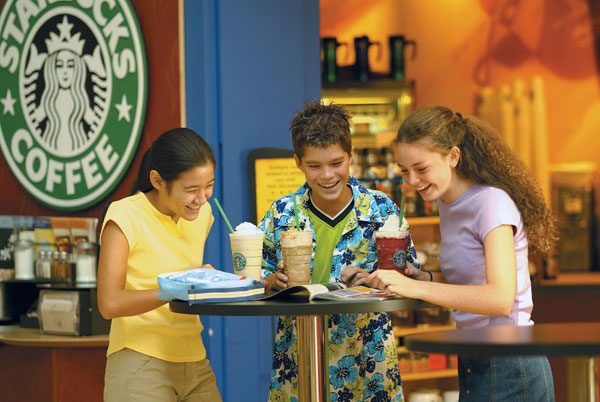 There is concern about the effects of caffeine on children under 17. (Photo: Marriott World Center)

Dr. Fauzia Mahr, associate professor of psychiatry and pediatrics at Penn State Hershey, says children ages 12 to 17 are the fastest-growing consumers of caffeinated products. Three of four children that age consume caffeine in some form on a daily basis.

“As a society, we follow marketing and trends, and many of these companies do tend to target the younger consumers,” Mahr said. “Plus, the drinks offer a quick pick-me-up welcomed by a generation used to immediate gratification.”

Preferred sources of caffeine vary according to gender. Ads for energy drinks play to teen boys’ desire to perform well in school and sports. Girls, on the other hand, lean toward tea because of its antioxidant and diuretic effects. “Some girls may be preoccupied with wanting to lose weight,” Mahr said. “Diet pills can also be a significant source of caffeine.”

Mahr suggests young people also may simply be mimicking what they see the adults around them doing and taking advantage of greater access to a larger variety of caffeinated products in different forms and flavors. “It almost makes it seem OK,” she says.

It could be a sign of the times that just last year, the American Psychiatric Association updated its Diagnostic and Statistical Manual of Psychological Disorders (DSM) to include caffeine withdrawal as a new category of mental health disorder.

Adults who consume 250 mg or more of caffeine daily — the equivalent of two to three cups of regular coffee — can experience caffeine intoxication, in addition to caffeine-induced anxiety or sleep problems, restlessness, a flushing of the face, muscle twitches, insomnia, rambling speech, heart palpitations or behavioral issues, such as difficulty sitting still or focusing on a task.

While few studies have examined the long-term effects of caffeine, the American Academy of Pediatrics advises that children who have not gone through puberty stay away from caffeine altogether. If they do consume caffeine, it should not be more than 100 mg per day.

“The risks are typically higher in children because their brains are still developing,” Mahr said. “There is not a lot known about brain development and neurocircuitry, or how the introduction of a substance (such as caffeine) may affect it.”

There also is concern about studies that show those who consume more caffeine tend to eat fewer fruits, vegetables and dairy products and gravitate toward unhealthy foods. Many of the drinks that contain caffeine also include high quantities of sugar. Together, the two can create more sensitivity to the rewarding effects of each.

But just as not all adults who drink alcohol become alcoholics, not everyone who consumes caffeine will have the same level of sensitivity to it. For example, studies have found that young boys are more sensitive than girls to the effects of caffeine consumption. Young boys also tend to experience a greater decrease in heart rate than girls do when consuming such drinks.

Mahr suggests adults pay attention not only to how much caffeine the young people around them are consuming, but the behaviors they are modeling for them as well.

“It’s important to talk about how there needs to be a balance in nutrition, whether we are talking about caffeine or something else we are ingesting,” she says. “You want to find out why the child is using it in the first place. Then you can have a discussion about it and educate them.”