With warm weather sure to be here soon and since May is National Salad Month, the Blue Duck Tavern at the Park Hyatt hotel, 1201 24th St. NW, is featuring three lunch salads made with house-made vinegar. 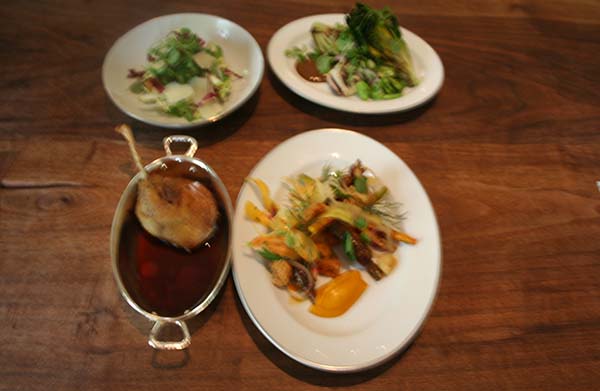 The three spring salads at made with house-made vinegar with duck leg confit at Blue Duck Tavern. (Mark Heckathorn/DC on Heels)

Executive Chef Sebastien Archambault, who was born in Lubbock, Texas, and grew up in Le Bugue, France, began making two kinds of vinegar at the restaurant last June. They were added to the menu about two weeks ago.

“People care about their health more and more,” Archambault said. “They are eating so many veggies. We try to source locally from co-ops and little farm and distributors. The very flavorful vinegars elevate the salads and oysters.”

Chef de Cuisine John Melfi orders the salad ingredients from co-ops in Path Valley and Tuscarora, Pa., twice a week. He tries to buy ingredients from local purveyors within 110 miles of D.C. Most are from small Amish or Mennonite farms that form co-ops to sell their products ranging from produce to eggs to whole animals. The source of each item is listed on the menu. “Customers love that they know where it comes from,” Melfi said. 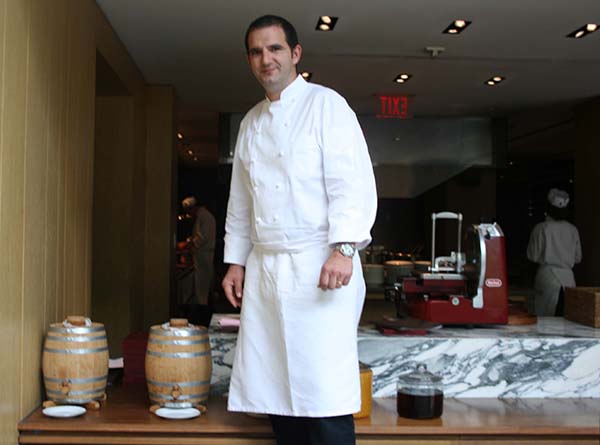 “In France it was so common that everyone had a barrel in their cavern (wine cellar),” Archambault said. “We’re doing so much from scratch, why not add a barrel?”

The house-made vinegar is also served with the restaurant’s oysters as an echalotine — a mixture of the vinegar, shallots and black pepper — and as a glaze on various dishes, but will be used on more dishes as summer approaches and diners eat more salads.

The vinegar is not as distinctive on the salads, but diners can taste it more on the oysters. “On the salads, it is more discreet and highlights the vegetables,” Archambault said.

“It is so different,” said one diner at the restaurant on the day DC on Heels visited. “You can tell” it is house made. She said her husband had a barrel and used to make his own vinegar. 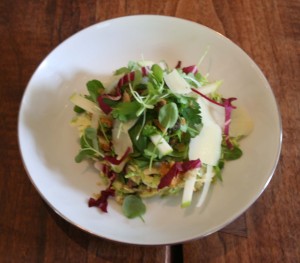 Archambault bought two 2-foot tall barrels from Oregon and a “mere” or “mother of vinegar.” The mere, a live bacteria, is added to an 8 percent alcohol wine-water mixture. Once the process starts, wine is added and in two to three months the wine has turned to vinegar.

Then “[w]e replace the vinegar with wine as it is used each day,” Archambault explained. “We never empty the barrels completely.”

The restaurant’s red wine vinegar is made using The Boxwood Winery’s “Topiary” Virginia Red, a blend of Cabernet Franc and Merlot grapes. The white vinegar is created by feeding the mere with Chardonnay wine.

“They are very full bodied, very strong and rustic,” Archambault said. “The wood is very pleasant.” 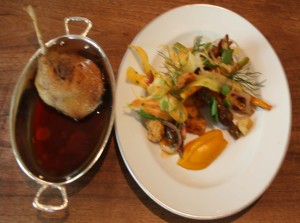 The three new salads served with the house-made vinegars include the charred baby lettuce salad made with the red wine vinegar, spring onions, green peas and an anchovy emulsion. The shaved Brussels sprouts salad made with apples, walnuts and parmesan cheese and the baby carrot salad made with fennel, orange, pickled shallots and olive oil croutons are both made with the white wine vinegar. Virginia ham, chicken breast, scallops, wagyo hanger steak, duck leg confit or prawns can be added to make the salad an entrée. The side salads are $11 and range from $21 to $25 with the proteins. The salads will be rotated each season.

Archambault has purchased two more barrels that should arrive in the next week or two. One will hold a vinegar infused with fresh raspberries that the chef says will be sweet and flavorful and pair well with bacon or liver. The other he plans to experiment with. First will be a rhubarb vinegar infused with rhubarb jam that will be served with a seared foie gras, but Archambault also plans to try a cherry vinegar that would be paired with a beet salad with friend peanuts.