There’s a new Pilates studio in town… and it goes by the name of FUSE.

Nestled on a quiet street just steps away from the hustle and bustle of Dupont Circle, there is a massive 5 story townhouse that has recently been transformed into a Pilates oasis in the middle of the city. 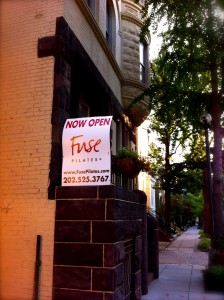 Fuse Pilates studio is located just off of Connecticut Ave. at 2008 Hillyer Place NW in Washington.

The owners call it “The Playground.” In addition to workout rooms, there is also space on the main level for people to just hang out and relax, have a drink or use their free wireless Internet. 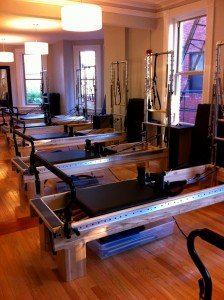 I recently attended their Jump Interval class, where I not only got in a good workout on the Reformer machine (see photo above – doesn’t it look like a torture device?), but I also got to learn more about Fuse Pilates from Creative Director and Cofounder Mariska Breland. 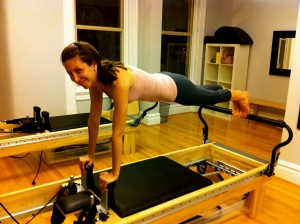 Don't try this at home kids: Mariska Breland, creative director at Fuse Pilates, strikes a pose for DC on Heels.

Mariska: It did open June 1st, but Fuse Pilates has actually been around since 2005. First at Flow Yoga Center, then I started teaching at other local gyms. We started this studio to bring all of our teachers together and have all of our classes under one roof.

Markette: OK, so what makes Fuse different from any other Pilates studio in DC?
Mariska: Well at Fuse we really value innovation in exercise. So whereas a traditional Pilates studio might have 34, 35 exercises that are really great exercises and that are usually sequenced in the exact same way, we have hundreds of exercises.

We teach on request. We choregraph to music, so we like to have a little bit more fun. But we also like to think that our teachers here are a little bit more qualified. A traditional mat training might be done in a weekend, our mat training program is 8 weeks just to get to the apprentice level before you can even teach a class. 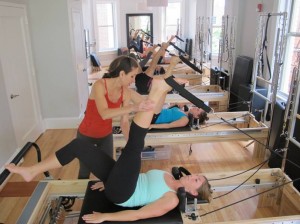 Mariska works with students in one of their signature "taught by request" classes.

In terms of our appratus classes, we teach a lot of non-traditional exercises and my mentor — his name is Julian Littleford– in California, he is probably the most innovative Pilates teacher in the country. And one of the things I think he does really well is that he doesn’t do any traditional work in his classes… and we sort of mix in traditional and non-traditional.

Markette: And don’t you think that non-traditional exercises is the way to go because you really have to keep your body guessing. You know, a lot of people get bored with the gym.

Mariska: Exactly. We try try to do things where your body can’t really plateau because you never know what’s coming next. And that’s something that a lot of our students say they like about the classes. It’s that you don’t know what you’re going to run into and what’s going to happen next.

Super Model Gisele Bundchen is a fan of Pilates. (Photo Courtesy: It's A Core Thing.com)

There is a structure to each of our classes, but we don’t repeat the same exercises in the same sequence. So you could go 50 classes without doing the same [sequence of exercises] twice.

When you confuse the muscles by changing it up a lot I think you get better results faster, and then you have less plateauing and it gets less boring.

Markette: And the Reformer machine. I’ve never used it. It looks like a torture device or something, but I loved it! You’re lying on your back, so it’s low impact. Are these common in a lot of Pilates studios in Washington?

Mariska: These are Balance Body Studio Reformers, so they are good ones. I always say that if you can fold up a Reformer then it’s not a good one. So these are very nice, very expensive and we have a combination machine.

So what we used today in the Jump class was the Reformer with the jump board on it, but we can take the Reformer apart and use the torture chamber looking part — that’s the tower — where we can do a ton of different fun exercises. So for example, in our circuit class it’s half Reformer, half tower and we basically switch it up half way through. And then we have the Reformer only classes and they’re all choregraphed to music and all Fuse style.

Markette: OK, so what were the exercises in the class I took.

Now that you know a little bit more about Fuse Pilates, check them out at 2008 Hillyer Place, NW in Dupont Circle.