Detroit-style pizza is becoming a trend in the DMV food scene. Unlike the pizzas from the flimsy, mass-produced chain pizza companies founded in Motor City – Domino’s and Little Caesar’s – the city boasts a hearty pizza known as the Detroit-style square. 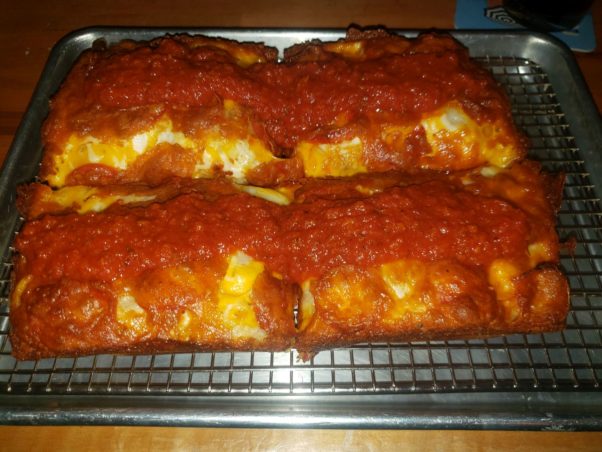 With its rectangular shape, light, airy dough and savory, browned Wisconsin brick cheese edges, the Detroit-style pizza began at Buddy’s Rendezvous Pizzeria on Detroit’s eastside in 1946 when in Gus and Concietta “Connie” Piccinato made their first square-shaped pizza. Baked in blue steel pans borrowed from local automotive plants, it was the first known square pizza in the U.S.

Although clearly rectangular in shape, Detroit-style pizzas are “square.” Perhaps the closest cousin to the Detroit pizza is the Sicilian sfincione, a spongy focaccia baked in a rectangular pan with toppings pressed directly into the dough and topped with olive oil and tomato sauce. Detroit-style pizza makers use a similar dough recipe that results in a light, porous dough that isn’t chewy like a New York-style pie.

Occasionally it is described as a “Detroit Red Top,” describing the uncommon construction of the square pizza, with a crust covered in reverse of what you would expect — toppings like pepperoni on the bottom, followed by loads of cheese and red sauce drizzled on top. While perhaps unconventional, the “red top” helps to avoid a soggy crust.

Since last summer, two shops in the District have begun serving Detroit-style pizza. Aaron Gordon’s Red Light, 1401 R St. NW, was the first, swapping out its usual bar fare for the square pizzas at the end of July.

Chef Naomi Gallego, who makes wood-fired pies at Little Beast, Gordon’s neighborhood restaurant in Chevy Chase, led the overhaul at Red Light, which before the bar fare was dessert focused. The seasoned pastry chef swapped the former fried foods and flatbreads for the same deep dish pies she ate growing up in Michigan.

The Blue Duck Tavern and Le Diplomate alum said she had been developing a plan to bring her native pie to D.C. for four years. While 14th Street has plenty of pizza options such as Match Box, Sette Osteria, Ghibellina and Lupo Verde, they all fall into the Neapolitan pizza category.

Brooklyn-based Emmy Squared Pizza, 1924 Eighth St. NW, followed opening in Shaw this past January. The chain has seven locations, mostly in New York City, but also two in Nashville and one in Philadelphia in addition to its newest in Tim Ma’s failed Kyirisan location in The Shay development. There are also plans to open a second in Navy Yard.

So with two restaurants serving Detroit-style pizza just blocks from each other, we set out to find which served it better. Our choice: Red Light!

Red Light is a dive bar. On two separate occasions that we visited, there were only two employees working: the bartender, who also took the orders, and the cook, who doubled as food runner. This place doesn’t take reservations, is mostly bar seating with a few high-top tables and patio seating in warmer months. The walls are red and black, the floor is cement and the bar top is sticky. Quite frankly, the atmosphere here sucks, but the pizza more than makes up for it.

Also, if you aren’t in the mood for pizza, this probably isn’t the place for you since that is all they serve. There are a few appetizers, including burrata, Detroit boneless wings tossed in a Calabrian chili garlic butter, one over-priced salad, meatballs and cannellini bean dip with focaccia.

But despite all that, it had the best Detroit-style pizza of the two. The crispness of the rectangular crust and the flavor of the sauce were the standout features. The inch-thick crust is deliciously crispy and oily and light. The pizza is served on a rack to keep the crust from getting soggy. And it isn’t at all dense like Chicago-style pizza.

Red Light offers both red and white Detroit-style pizzas. The Motor City has cheese, tomato sauce, garlic, bacon, ham, pepperoni and meatballs which the Motown features cheese, tomato sauce, chile relish, caramelized onions, meatballs, roasted red peppers, pepperoni and banana peppers. The Hamtramck comes with cheese, bechamel sauce, bacon, caramelized onions and pierogis; the Coney is topped with cheese, chili, hotdogs, onions and mustard; and the Greenfield Village is a vegan pie with vegan cheese, tomato slices, vegan meatballs, green peppers, mushrooms, caramelized onions, spinach and onions. All are cut into four quarters so they are all corners and will fill you up, even if that is all you order.

Prices range from $12 for the build-your-own with an extra $2 for each meat topping and $1 for each veggie topping to $17 for the personal-size pies. 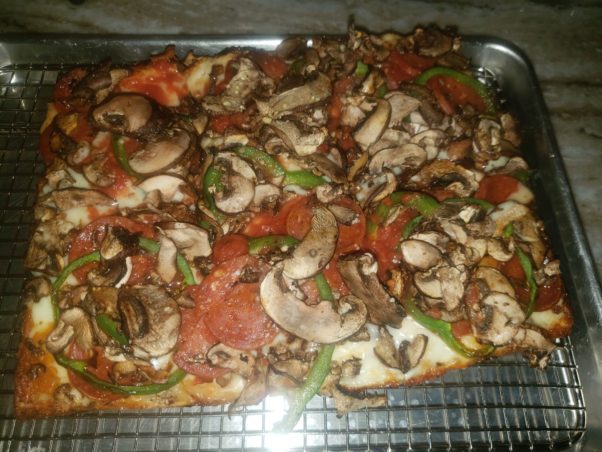 Emmy Squared has a larger menu, better atmosphere and nicer interior than Red Light, but the food doesn’t stack up.

Sure, Emmy Squared has more staff, but service coming out of the kitchen is SLOW. We visited on a Wednesday (the restaurant is closed Monday and Tuesday), so we didn’t think we would need a reservation, but the unfriendly hostess with the fake-British accent said it would be a two-hour wait. However, we counted six empty tables and three empty booths. Some of those tables never had anyone at them the whole time we were there.

Emmy Squared has a much wider menu including appetizers, three salads, chicken sandwiches and burgers in addition to red and white pizzas. Although slightly cheaper, with pizza prices ranging from $11-$16, add-ones range from $2-$5, so if you build your own pizza, the price will inflate quickly. Also, if you are drinking soda, beware. They charge $3.50 for each glass – refills are NOT free!

Emmy Squared’s crust is not a crispy as Red Light’s and came without much sauce, which was buried under the pepperoni, mushrooms and green peppers of the deluxe. Definitely not what the menu – or website – promises. But considering Emmy Squared is owned by New Yorkers, that is kind of like expecting real Mexican food in Wisconsin.

Also, Emmy Squared cuts its pies into six slices, so you get two slices that only have one little side of crust. This made the soggy crust even more noticeable, since those slices were too flimsy to make it from tray to mouth without flopping over. And while Emmy Squared does offer gluten-free crust, none of the pizzas are vegan friendly since vegan cheese isn’t available nor are any plant-based meat substitutes.