Jumanji: The Next Level Swings to the Top

Just one weekend before Star Wars: The Rise of Skywalker explodes into theaters, a rush of new titles – Jumanji: The Next Level, Richard Jewell and Black Christmas – burst onto screens last weekend (Dec. 13-15) to get a jump on Disney’s surefire blockbuster. Overall, the results were mixed; while Jumanji: The Next Level finished at the high end of expectations with $59.25 million, the other two both underperformed. 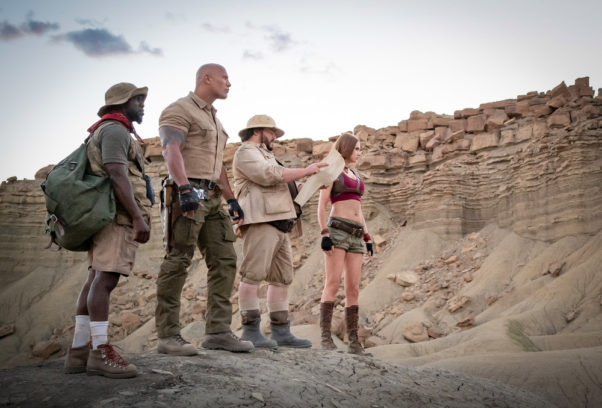 Jumanji: The Next Level debuted in first place over the weekend with $59.25 million. (Photo: Sony Pictures)

Sony Pictures’ Jumanji: The Next Level significantly bested the debut of its predecessor Jumanji: Welcome to the Jungle, which debuted to $36.17 million in late December 2017 before going on to an incredible $404.54 million domestically – making it Sony’s highest earner of all time in North America – and a whopping $962.10 million worldwide. It opened the week after that year’s Star Wars: The Last Jedi, somewhat blunting its initial earning potential, while The Next Level hit theaters one week before The Rise of Skywalker. In general, the latest entry in the Star Wars franchise is expected to be much more front-loaded than its predecessor.

In any event, it is a great start for the family-adventure threequel, which benefitted from audience goodwill from the last installment and the return of the film’s popular core cast, including Dwayne Johnson, Kevin Hart, Jack Black and Karen Gillan. In addition to being Sony’s biggest opening ever in December, it is also the highest-ever opening for a comedy released during the month and the biggest live-action debut for both Hart and Black.

Heading into the weekend, it was difficult to know just how high or low The Next Level would go, with expectations ranging from the studio’s $35 million to a very bullish $70 million. While reviews for The Next Level were slightly more muted than those for Welcome to the Jungle, moviegoers seem to like it just as much, with excellent opening day audience scores. The audience was 56% male and 29% over the age of 25.

Dropping to second place after being in the top spot three weekends in a row was Walt Disney Studios’ Frozen II, which fell 45.8% to $19.07 million in its fourth weekend. With the animated sequel’s total now standing at $366.43 million domestically, it is running significantly ahead of the original Frozen at the same point, although it is worth noting that the first film was also much less front-loaded and ultimately earned $400.74 million in North America. Worldwide, it became the eighth from to pass $1 billion this year.

In third place was Lionsgate Films’ sleeper hit Knives Out, which dropped just 35.7% to $9.14 million in its third weekend. The comedy-mystery now stands at $78.82 million domestically after 17 days, giving it a good shot at hitting the $100 million mark by the end of its run. 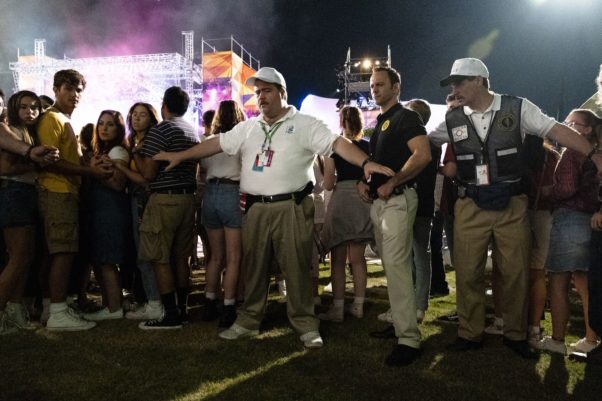 Warner Bros. Pictures’ Richard Jewell finished in fourth with $4.68 million, far below expectations, which had it generally finishing in the $10 million range. Based on the real-life title character — a security guard who was wrongfully suspected of planting a bomb at the 1996 Summer Olympics in Atlanta, leading to a media firestorm — the Clint Eastwood-directed film has suffered its fair share of controversy leading up to release, including charges that the film’s portrayal of Olivia Wilde’s character Kathy Scruggs, the real-life journalist who first reported that Jewell was a “person of interest” in the bombing, is sexist and defamatory of her character.

There is no way to know how that controversy may have affected Richard Jewell’s performance either way last weekend, although the debut was certainly a far cry from the $89.2 million opening of another ultra-controversial Eastwood-directed film, 2014’s American Sniper. That movie went on to gross $350.13 million in North America in part due to uproar over the film’s portrayal of lead character Chris Kyle by more liberal viewers and media commentators, which had moviegoers in more conservative-leaning Southern and Midwest states turning out in droves to support it. However, that film’s controversies were much more substantial and wide-ranging than Richard Jewell’s, so comparing the two isn’t particularly apples to apples.

Whatever the case, Richard Jewell is among Eastwood’s lowest-ever debuts as a director, a list that also includes 1999’s True Crime with $5.27 million and 1997’s Midnight in the Garden of Good and Evil with $5.23 million. On the positive side, the film received outstanding scores from opening-day audiences, suggesting some potential for positive word-of-mouth moving forward.

Just behind Richard Jewell in fifth place was Universal Pictures’ Black Christmas, the second remake of the 1974 holiday horror film of the same name that became a prototype for the low-budget slasher movies that dominated the following decade. With $4.24 million, Black Christmas came in well below expectations, including the studio’s $10 million prediction heading into the weekend. The film wasn’t helped by so-so reviews and an overall negative reception from audiences, resulting in a poor opening day audience scores.

There were a number of factors that appeared to be working in Black Christmas’ favor last weekend, including no major horror competition, a teen-friendly PG-13 rating, the benefit of the well-known Blumhouse brand and a marketing campaign aimed squarely at young women, who make up a substantial portion of the horror-movie audience, that lightly emphasized the film’s feminist themes (notably, the new Black Christmas was written and directed by women). Opening audiences were 54% female and 57% over the age of 25. That said, unlike remakes of better-known horror titles, Black Christmas is more of a cult phenomenon than a mainstream one. In any event, the budget on Black Christmas is reported to be just $5 million, so it is a relatively low-risk release for the studio.

The remainder of the Top 10 consists entirely of holdovers. In sixth place, 20th Century Fox’s Ford v. Ferrari had another slight drop, slipping just 38.7% to $4.08 million in its fifth weekend. With $98.19 million in North America to date, the Disney-released title is just days away from crossing the $100 million threshold. Seventh place went to Universal’s Queen & Slim, which fell 46.1% to $3.58 million in its third weekend for a domestic total of $33.16 million after 17 days. In eighth place was Sony’s A Beautiful Day in the Neighborhood, which dropped 36.9% to $3.28 million for a domestic total of $49.25 million.

In ninth place, Focus Features’ Dark Waters fell 52.5% to $1.90 million in its second weekend of wide release and its fourth weekend overall, bringing the domestic total for the fact-based Mark Ruffalo-Anne Hathaway title to $8.79 million. Finally in 10th place, STX Entertainment’s 21 Bridges took in $1.18 million, a drop of 58.9% for a North American total of $26.36 million.

As mentioned above, this coming weekend sees the opening of Disney’s Star Wars: The Rise of Skywalker. Also opening is 20th Century Fox’s animated Spies in Disguise and Universal’s musical stage adaption of Cats.