Grazie Grazie sandwhich shop, which opened at The Wharf on Tuesday, has a menu that mirrors the former Taylor Gourmet, which was also owned by Casey Patten. Many menu items have the same name and ingredients. (Photo: Eat_DC/Twitter)

Fans of the bankrupt Taylor Gourmet will notice many similarities in Grazie Grazie’s menu including “The Pattison” with sharp provolone, broccoli rabe and olive oil, as well as the “Ben Franklin” with hand-breaded or grilled chicken, sharp provolone, marinara and fresh basil. Other returning menu items include the vegetarian “Cumberland” sandwich, the risotto ball appetizer and the “Love” salad with arugula, cherry tomatoes, basil, pastina and sherry vinaigrette.

The new restaurant also offers build-your-own sandwiches and fries that Taylor didn’t have.

A spokesperson confirmed that Patten owns Grazie Grazie and noted that it is a solo venture.

Taylor Gourmet closed all of its locations including 17 in the DMV last September and filed for Chapter 7 bankruptcy in October. Only the Reagan National Airport location remains because it operates under a licensing agreement with Concessions International, so it was excluded from the bankruptcy proceedings.

There is also word that Source Cuisine, which bought Taylor Gourmet’s assets for $260,000 in a bankruptcy sale in March beating out Patten and fast-casual chain Cosi, could reopen at least five locations by August. Steve Kalifa from Source told Washingtonian magazine the shops would have a similar menu to what they did previously with the addition of some healthier options and salads.

It is unclear how the recipes are shared between the two companies, if at all.

Dacha, the Shaw beer garden known for its three-story-tall mural of Elizabeth Taylor, beer boots and brats, opens a new, upscale location May 1 at 79 Potomac Ave. SE in Navy Yard near Nationals Park. 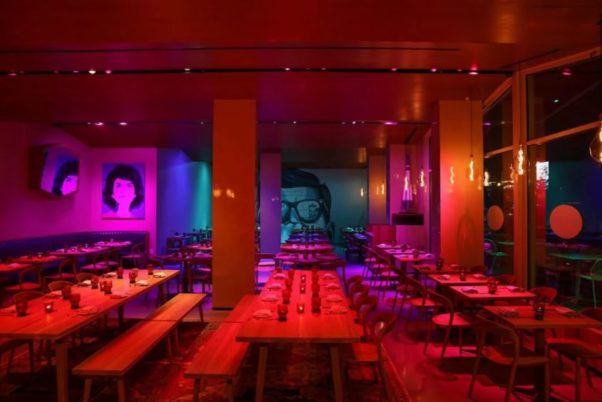 Owners Dmitri Chekaldin and Ilya Alter were both born in Russia and met as college students in Washington. The retro-chic décor takes inspiration from 1960s Soviet Union-American relations. A portrait of President John F. Kennedy Jr., designed by Russian dissident artist Igor Ponochevnyi, looks over the 140-seat dining room. On the exterior is a 16-foot portrait of Jackie Kennedy Onassis.

Chekaldin and Alter tapped chef Taylor Burlingame, formerly executive chef of Mike Isabella’s shuttered Requin at The Wharf, to helm the kitchen. His fine-dining experience includes nearly three years at the Mina Group’s RN74 in San Francisco, where he worked with chef Michael Rafidi before joining him at Requin.

Burlingame’s menu includes French-leaning dishes like escargots, steak frites and cassoulet, although it is modern American overall. You are as likely to dine on southern-style Jimmy Red grits — an heirloom variety — with seared scallops and bacon-cauliflower foam as you are Asian-accented tuna tartare tartine. And don’t worry, there will still be plenty of brews and brats when the outdoor biergarten opens later this month. 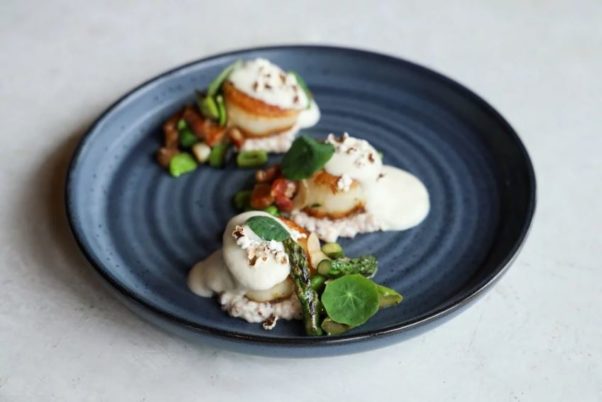 The team studied State Dinners and other White House menus from the Kennedy era and for grander touches, like the massive, bone-in, dry-aged ribeye with béarnaise sauce, whole honey-glazed duck presented table-side with confit croquettes and huckleberry jus and lobster linguini.

On the drink menu, the team researched JFK’s favorite Hemingway daiquiri and Jackie’s favorite, a vesper. Both are served in the 69-seat bar with huge windows opening to the water and on a 40-seat patio. The lengthy cocktail list is joined by 26 beers on draft that will only be served indoors. German and Belgian brews feature heavily, including six styles of Weihenstephaner, plus locals like Right Proper Raised by Wolves and Baltimore’s Union Craft Old Pro gose.

On the 800-person beer garden, the focus will be on specialty cans, including limited-releases and special collaborations like a Dacha-specific beer from DC Brau. Burlingame is planning a simple garden menu of pretzels, sausages and other brew-friendly eats. And of course, with the owners being Russian, there will be Moscow mules and just plain vodka.

Dacha will be open from 4 p.m.-midnight Sunday through Thursday and 4 p.m.-1 a.m. Friday and Saturday with the beer garden menu and weekend brunch to follow.

Alba Osteria, Hakan Ilhan’s six-year-old Italian restaurant at 425 I St. NW, closed this week after Ilhan was unable to reach a deal with the landlord on the rent. 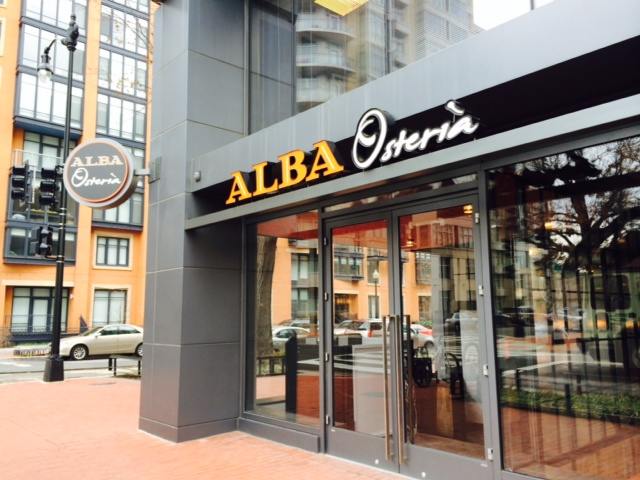 Alba Osteria in Mount Vernon Triangle closed this week when it couldn’t work out a new least with its landlord. (Photo: Urban Living)

“We came to a mutual financial agreement with the landlord to close Alba,” Ilhan told Eater DC. “We are focusing on deals that reflect the current times of our industry with better terms that takes into account of the raising operational costs in the hospitality industry today.”

The restaurant served food from the Piedmont town of Alba with fresh pastas, antipasti and pizzas cooked in a wood-burning oven. Centrolina chef and James Beard Foundation Award finalist Amy Brandwein was its opening chef de cuisine in late 2013.

But competition moved in across the street when chef Michael White opened Nicoletta Italian Kitchen last month in the D.C. Bar’s new headquarters.

Ilhan proposed turning Alba into a Mexican restaurant, but couldn’t reach an agreement on rent. The space, lined with orange accents, featured windows and wood paneling that were salvaged from the old American Crayon Co. factory in Sandusky, Ohio.

Ilhan also owns Turkish-inspired Ottoman Taverna next door to Alba in the same building, as well a Al Dente near American University and French restaurant Mirabelle. He also has two project in the works: a multi-million dollar conversion of Morton’s the Steakhouse in Georgetown into French brasserie Liberté, which is expected to open in late summer, as well as an American bistro in the West End expected in early 2020. He is also reportedly negotiating with landlords for two additional locations.

Momofuku CCDC, 1090 I St. NW, opened a dedicated to-go counter just inside the front door of the CityCenterDC restaurant on Monday. 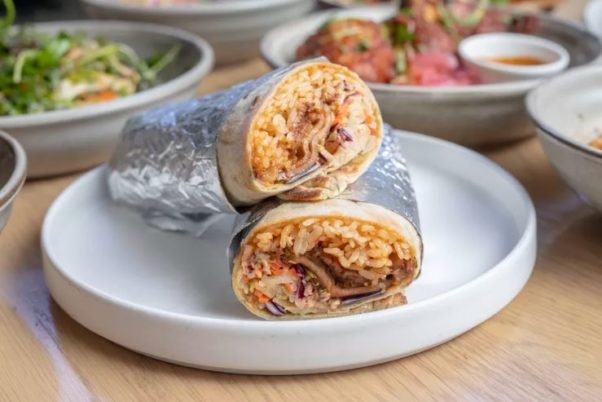 Lunch and dinner menus are available to order from the counter, with dishes prepared and packaged with carryout in mind.

There is also a selection of drinks and snacks for diners looking for a light midday meal, but who would prefer to dine in the restaurant. Those dishes include kimchi potato salad, cultured honey butter and bing bread, and salted pimento cheese spread and smoked trout dip served with salt and vinegar potato chips.

The restaurant is firing up the rooftop wood grill, serving a duo of skewers such as shrimp with a garlic and honey glaze ($15) and pork belly with fresh pineapple and an apricot glaze ($14); and wings such as the grilled whiskey wings coated in habanero and honey bourbon sauce ($13) and the grilled jerk wings with allspice, chillies and garlic ($13). Fire-grilled burgers and sliders include the Big Jack with pimento cheese, bacon, pickles, lettuce and fried shallots ($16) and its miniature version, the Little Jack sliders ($11), plus crispy chicken sliders with grilled pineapple, Duke’s mayonnaise and lettuce ($11) and lamb merguez sliders with pickled red onion and harissa aioli ($13).

The grill menu is available from 5-10 p.m. Wednesday through Saturday. Happy hour on the terrace is from 5-7:30 p.m. Monday through Friday with half-priced bites and $2 off drafts and wine by the glass.

From 3-7 p.m. on Saturday, May 4, the terrace hosts its seventh annual Kentucky Derby celebration and viewing party with mint juleps and derby punches, complimentary Southern bites, such as Kentucky Hot Browns and cucumber sandwiches, Kentucky bourbon flights and a live viewing on five large flat-screen TVs (post time is 6:30 p.m.).

Drink specials include mint juleps ($9), Derby Punch ($8) and classic bourbon Cocktails ($10), along with whiskeys, Kentucky bourbon flights and cigars throughout the day. The Gardener’s Grove Julep, part of Garden & Gun magazine’s Mint Julep Month, made with bourbon, grapefruit-mint oleo saccharum, hopped grapefruit bitters, angostura bitters and mint will be on special for $9 (regularly $13).

The party is free and open to the public. Guests are encouraged to don their Derby best bow ties, seersucker and big hats.

May is National Burger Month and Morton’s is serving a special all month long.

Morton’s is featuring its Gorgonzola-Bacon Burger with fries for $25 all duing May for National Burger Month. (Photo: Mortons)

For the entire month of May, Morton’s is offering the Gorgonzola-Bacon Burger featuring gorgonzola, Nueske’s thick cut bacon, red onion marmalade and bibb lettuce on a brioche bun with roasted garlic aioli and matchstick fries for $25. The restaurant suggests a wine pairing of Michael David, “Earthquake” Zinfandel for $11 per glass. 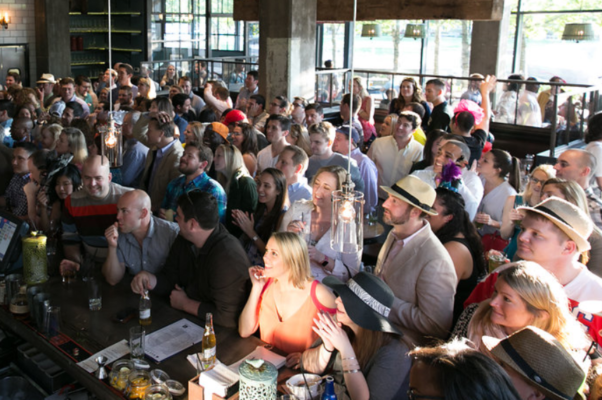 Due South hosts its Due South Derby Party from 3-7 p.m. Saturday. (Photo: Due South)

Guests will enjoy Derby-themed food, drinks, contests and giveaways leading up to “The Most Exciting Two Minutes in Sports.” The event is free to attend. Food and drink specials include $40 bottomless frozen juleps, beer cheese crostini, Kentucky Hot Browns, ham and biscuits, and more. 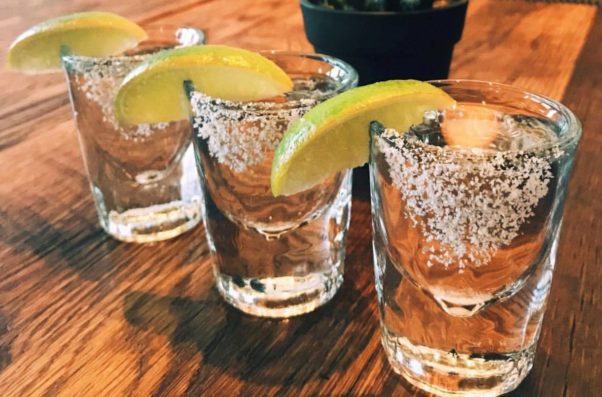 Both locations will celebrate beginning at 11 a.m. Saturday and 10 a.m. Sunday with parties that begin in the morning and last until late at night. Both will be serving bottomless brunch menus with unlimited guacamole and margaritas. There will be live music, food and drink specials, and giveaways.

Both locations will celebrate with Dos Equis pints for $5.50, 16-ounce Coronas for $6, El Jimador shots for $7, Mission margaritas by the glass for $7 or pitcher for $28, and Casamigos shots and quesadillas both for $8.